A mother has sparked a fierce debate after questioning whether she should let her 11-year-old son have a smartphone.

The Mumsnet user said she was considering getting him a mobile – but was worried that he could fall victim to cyber-bulling.

Posting on the parenting forum, she explained how her son was set to start secondary school in the autumn, before asking ‘Do all years 7s have smart phones?”

Other parents were quick to respond, with some suggesting that he could get ‘left out’ or even ‘picked on’ if she didn’t buy him one.

However, others said there was ‘no need’ for her to get him a smartphone at such a young age.

The Mumsnet user explained how she was considering getting him a mobile, but was concerned about cyber-bullying

Explaining her dilemma, the mother – who posts under the username snowdropsrout – said: ‘DS [Darling son] goes to secondary school in Sep. Doesn’t have a smart phone at moment in Yr6 .

‘We were thinking “big school” was the time we’d give in and let him have one. However, he seems prone to bullying/being picked on in school already. We are worried about what will happen when he delves into the cesspit of social media.

‘Do all year 7s have smart phones? Do any/many parents not let their DC have them? Do kids get picked on/left out for not having one? I’m assuming yes!’

Many parents on the forum suggested that the vast majority of children, aged between 11 and 12, starting secondary school would have their own smartphones.

One wrote: ‘I have children in years 10 and 7 and would say that pretty much 95% of kids in y7 have them. I think your DS would feel left out if he didn’t.’

Another added: ‘Without a phone he will get left out. Unfortunately children’s social life is all organised by phone these days.’

Meanwhile, one Mumsnet user posted: ‘If you’re worried about internet safety, learn about it…Don’t remove them from their generations sole means of communication’.

Some suggested that if some parents stopped letting their children have their own phones, others could do too

Others, however, suggested that there was ‘no need’ for her to buy him a smartphone at the age of just 11.

One wrote: ‘Mine never had a smartphone, or indeed any phone at all until going to secondary school at the age of 11. Just no need.’

Another added: ‘Forget the smart phone.. Hes a child he doesn’t need one. Social media ruins kids lives imo [in my opinion’. 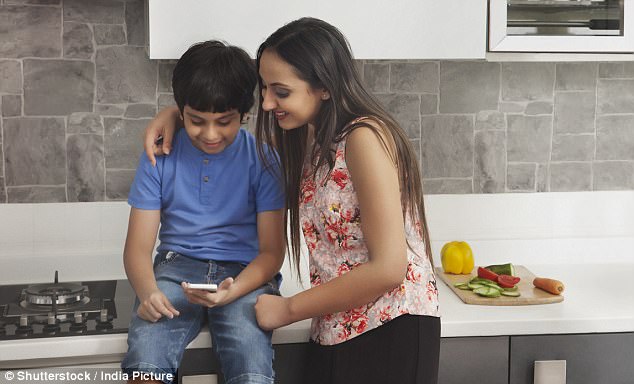 Some said their children had phones without access to the internet, while others used parental control software