Physically punishing children has largely become a taboo for modern parents, but would you intervene if you saw someone hitting their child?

That’s the dilemma a mother faced after witnessing a father hitting his child twice on the back of the head on the way to school.

The mother took to Mumsnet to ask for advice, explaining that the boy had asked his father to hurry up because they were running late and became agitated and pushed his father, resulting in the smacks to the head.

She intervened by telling him ‘don’t hit your child’ twice, but wondered if she should report it to a higher authority.

Her question provoked a heated debate with outraged parents encouraging her to contact the school’s safeguarding team, while others said she should approach social services of make an anonymous report to the NSPCC.

However, others insisted that it was none of her business and that the father was entitled discipline his son after the boy had pushed him. 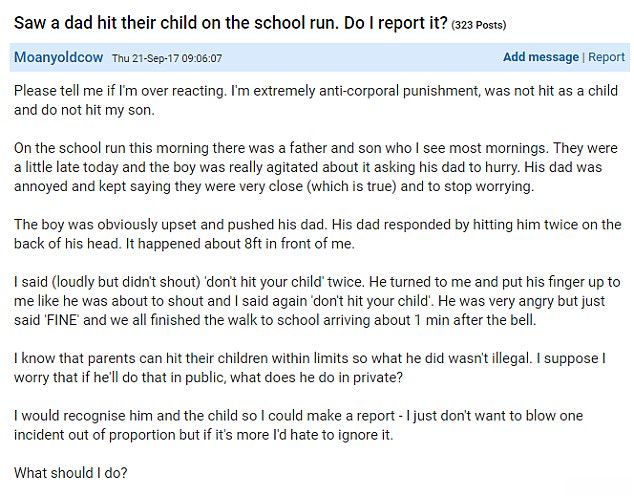 But one woman hit back at those taking a ‘none of my business’ approach, saying that this attitude meant she went through school covered in bruises with everyone turning a blind eye.

Others claimed that the father had committed assault and that what he’d done was illegal.

However, the law states that parents can use physical force for ‘reasonable chastisement’, but anything that leaves a mark, bruise or scratch can be considered illegal.

And people who were smacked as children chimed in to say that they hadn’t suffered any ill-effects and that a one-off incident does not amount to abuse.

WHAT IS THE LAW ON SMACKING CHILDREN?

In England, Northern Ireland and Wales, Scotland there is no ban on smacking and parents are allowed to use ‘reasonable chastisement.

This defence is laid down in section 58 of the Children Act 2004, but it is not defined in this legislation.

Whether a ‘smack’ amounts to reasonable punishment will depend on the circumstances of each case taking into consideration factors like the age of the child and the nature of the smack.

There are strict guidelines covering the use of reasonable punishment and it will not be possible to rely on the defence if you use severe physical punishment on your child which amounts to wounding, actual bodily harm, grievous bodily harm or child cruelty.

A mother criticised those who said the boy deserved to be punished for pushing his father, saying it’s only logical, then, that the man shouldn’t get away with hitting his son 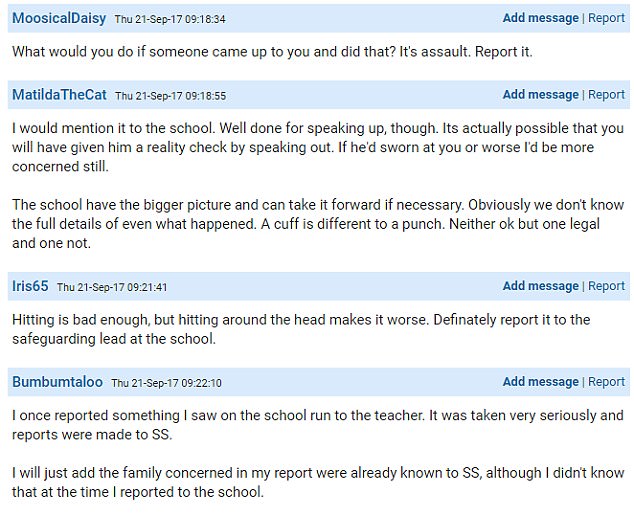 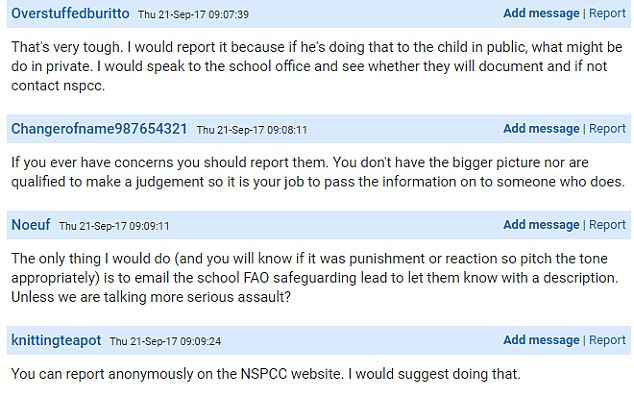 Others suggested making a report to the NSPCC to ease her conscience, rather than worrying whether she’d done the right thing or not

A mother chastised the woman, saying she had no right to remonstrate with the father over his parenting