London’s murder toll hit 69 for the year last night after a man in his 40s was stabbed to death in an upmarket area of the capital.

The man was pronounced dead at the scene on a road in Chelsea, West London, where actor Hugh Grant once lived, which has an average home value of £1.6million.

The victim was found seriously injured and died 40 minutes later at the scene, which is a short walk away from Chelsea FC’s ground Stamford Bridge.

Police at the scene in Chelsea, West London, today where a man was stabbed to death

A 24-year-old woman, who asked not to be named, told how she saw the victim laying on his back in the street at just after 11pm yesterday.

‘Our whole front room was lighting up and we wondered what it was,’ she said. ‘He was just laid in the middle of the road on his back. He wasn’t moving.

‘The guy was just laid diagonally across the street. All the police were really quick, it was really good, they were all running down the street.’

The witness said she did not hear any arguments, adding: ‘It was just really quiet and I came out and everyone was already there. No one heard anything or saw anything.’

Scotland Yard has now launched a murder investigation. No arrests have been made and a crime scene remains in place at the scene of the stabbing. 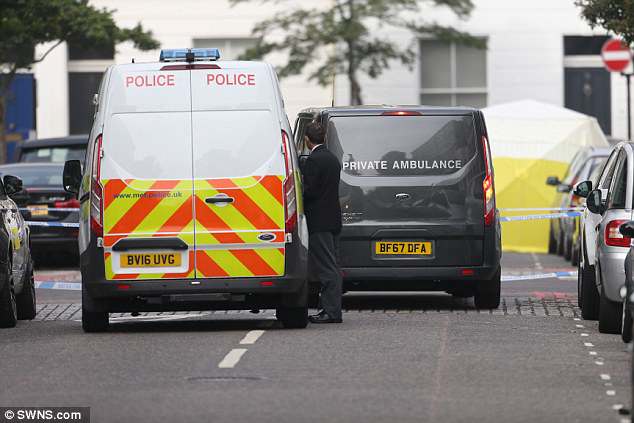 The victim’s next of kin have been informed, but formal identification is yet to take place. Police were called to the scene on Cathcart Road at 10.21pm yesterday.

Earlier this week, it was claimed that gang members suspected of inciting violent feuds on social media are to be treated like terror suspects.

Police will use new powers to target gangsters who promote violence in videos shared on websites such as YouTube.

Scotland Yard has blamed social media for the rising murder rate in London, singling out the ‘drill’ genre of rap music for glamorising violent crime. 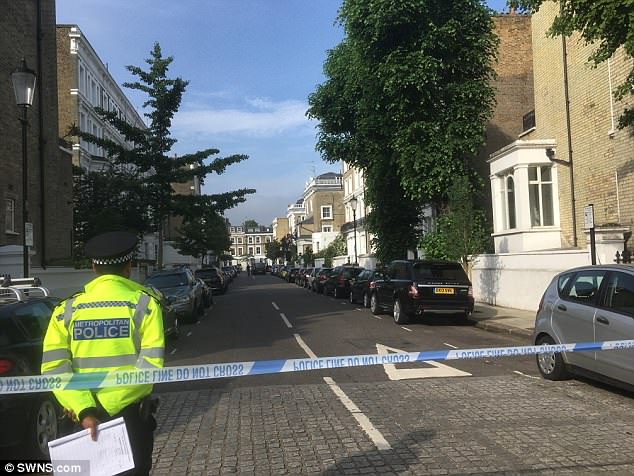 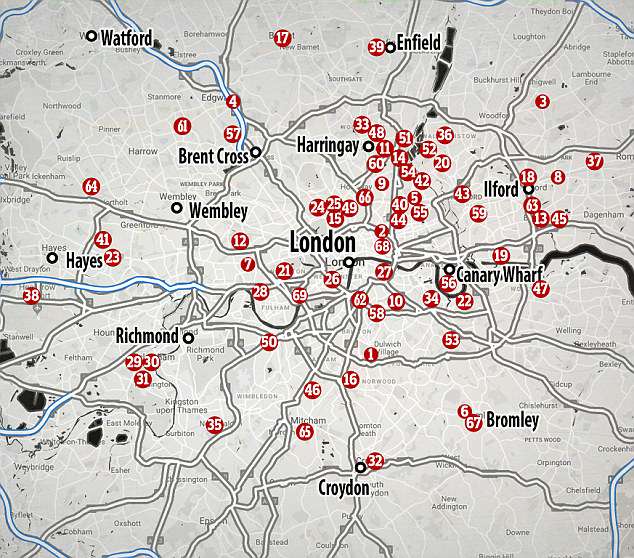 Commander Jim Stokley, who leads the Met’s response to gang crime, told The Times new measures would make it easier for detectives to pursue suspects.

Currently, officers have to prove that videos and social media posts are directly linked to individual acts of violence to secure a conviction for incitement.

But the Terrorism Act allows suspects to be convicted even if videos or posts are not linked to specific violent acts.

Mr Stokley said that for gangs ‘there isn’t specific legislation and clearly we can’t use terror legislation (but) in consultation with the Crown Prosecution Service, we have found some existing legislation which we are going to use.’

Mr Stokley stressed that the new measures, set out in the Serious Crime Act, would require the judiciary to agree with their reading of the law.

If this does not go to plan, the Met plans to seek the new legislation in consultation with the Home Office.

YouTube users can easily watch drill videos that feature masked gangs threatening each other with aggressive lyrics and gestures, some attracting millions of views. 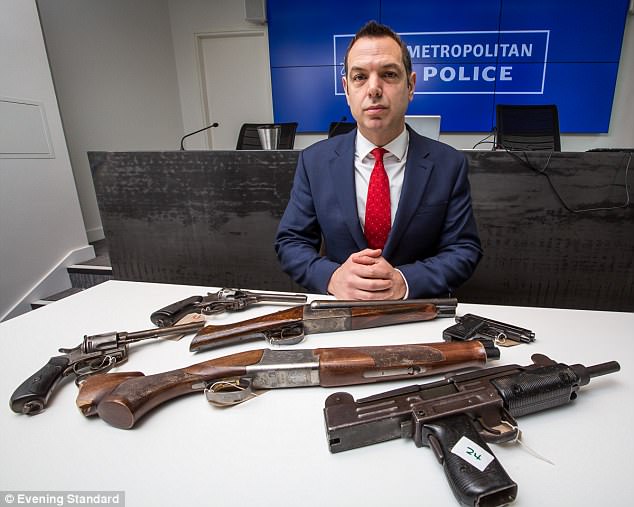 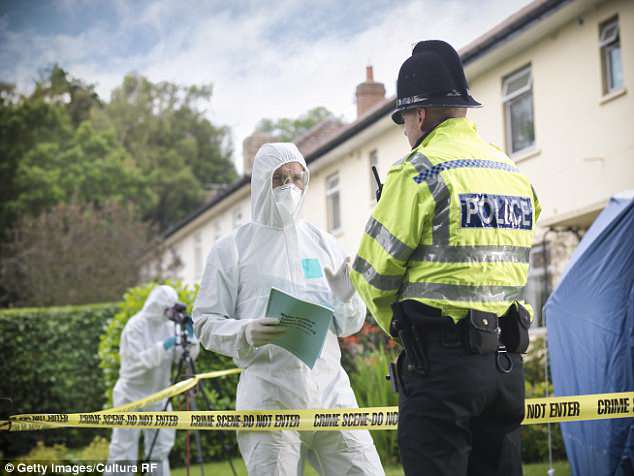 The Met has built up a database of more than 1,400 videos to identify those involved and monitor tensions among rival gangs.

In the past two years, police have asked YouTube to take down up to 60 videos but are forced to prove the clips are harmful first. Yesterday it was revealed the Google-owned site has only removed just over 30.

Has knife crime surged in Britain?

A knife crime epidemic in London and England’s big cities has seen the number of offences involving blades soar by more than a fifth in the last year.

Police in England and Wales recorded 39,598 offences involving blades in the year ending December 2017, a 22% increase compared with the previous year.

London saw a 44% increase in the number of killings, with more than 150 victims, while the number knife offences in the capital rose by more than 20 per cent to 14,680, separate stats showed.

Offences involving firearms were also up, by 11% to 6,604 recorded crimes.

Met Commissioner Cressida Dick has linked drill videos, which she said describe stabbings with ‘great joy and excitement’, to at least one attack. She said web giants had a ‘social responsibility’ to remove content that incites violence.

YouTube said most of the videos flagged by the Met are no longer available and that it has developed policies to tackle clips related to knife crime.

It comes after new Home Secretary Sajid Javid backed increased uses of stop and search powers and endorsed spit guards being rolled out to forces across the country.

Mr Javid said he is ‘absolutely determined’ to put an end to violence that is ‘terminating young lives far too soon’.

Referring to stop and search, he told the Police Federation of England and Wales’ annual conference in Birmingham: ‘Some of you don’t feel comfortable using it – and that’s not how it should be.

‘I have confidence in your professional judgment. So let me be clear – I support the use of stop and search.

‘You have to do your job and that means protecting everyone.’

The Home Secretary said it is ‘ridiculous’ that spit guards are available in some force areas but not others.

The hoods are made of mesh and can be placed over suspects’ heads to protect officers from being bitten or spat at. 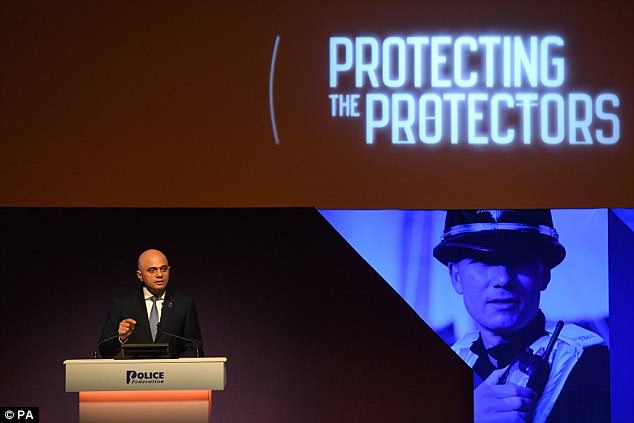 Mr Javid used his speech to pledge to officers he would provide ‘tools, the powers and the back-up that you need to get the job done’.

He said: ‘For those of you who stand on the front line, be in no doubt that I will be standing with you.

‘I’m not arrogant enough to turn up here after three weeks in the job and tell you how to do yours.

‘What I will say is that I am listening and I get it. I get that there’s increased demand.’

Mr Javid claimed that, including funds raised through council tax, more than £1 billion extra cash is being invested in policing now than three years ago.