Musk says Tesla’s new chairwoman will not rein him in

Tesla CEO Elon Musk dismissed the idea that the company’s new chairwoman can exert control over his behavior during a wide ranging interview on Sunday where he lamented his ‘terrible, violent’ childhood and laughed off the idea that he was erratic.

Speaking with CBS’s 60 Minutes, Musk played down the power that Robyn Denholm, Tesla’s new chairwoman, has over him.

‘It’s not realistic in the sense that I am the largest shareholder in the company. I can just call for a shareholder vote and get anything done that I want,’ he said.

Musk appointed Denholm himself earlier this year as part of a deal with the SEC which mandated that he step down as chairman for three years.

The deal was his punishment for tweeting that he was taking Tesla private for $420-a-share, a move which made the markets jump and which SEC regulators ruled was fraudulent.

The 47-year-old was allowed to stay on as CEO but was also required to pay a $20million fine. 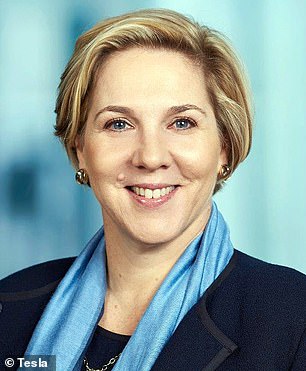 In his interview on Sunday, he said he would not be interested in resuming his chairman role after three years, saying: ‘I actually prefer to have no titles at all.’

He also suggested that he may try to scoop up some of the General Motors plants when they close next year, saying coyly: ‘It’s possible that we would be interested, [that] if they were going to sell a plant or not use it, that we would take it over.’

He also laughed off his erratic tweets by saying they are how he ‘expresses’ himself and telling interviewer Lesley Stahl: ‘I am just being me.’

Despite the SEC ruling that his tweets have to now be monitored, Musk said none had been checked and that if it gets to the stage where all of them are, it would be an infringement on his First Amendment right.

‘The only tweets that would have to be reviewed would be if a tweet had a probability in causing a movement in the stock.

He described Twitter as a ‘war zone’, adding: ‘If somebody is going to jump into the war zone it’s like, “You’re in the arena. Let’s go.”‘

He also said that many of his erratic tweets during the summer when he called a diver trying to rescue trapped Thai boys a ‘pedo’ came at a time when he was under ‘insane’ stress.

‘I am somewhat impulsive and I don’t really want to try to adhere to some CEO template. I am just being me.

‘I am somewhat impulsive and I don’t really want to try to adhere to some CEO template. I am just being me.

‘Under insane stress and crazy hours but the system would have failed if I was truly erratic,’ he said.

Asked how Tesla would stop his tweets from swaying the market again if none of them were being checked, he laughed: ‘I guess we might make some mistakes.

Musk, who owns about 20 percent of Tesla, said that while he agreed to adhere to the SEC’s punishment, he did not respect the organization.

He also spoke frankly about his ‘terrible’ childhood in Pretoria, South Africa, and described leaving home ‘aged 17 with a backpack of clothes and a suitcase of books.’

She then remarked that she had heard him speak in the past about being bullied, to which he replied: ‘I was almost beaten to death if you call that bullied.’

He added of his father, Errol: ‘My father has serious issues.’

Musk has spoken in the past about his father and how he abused him as a child. DailyMail.com previously revealed that Errol, 72, had fathered a baby with his 30-year-old stepdaughter. 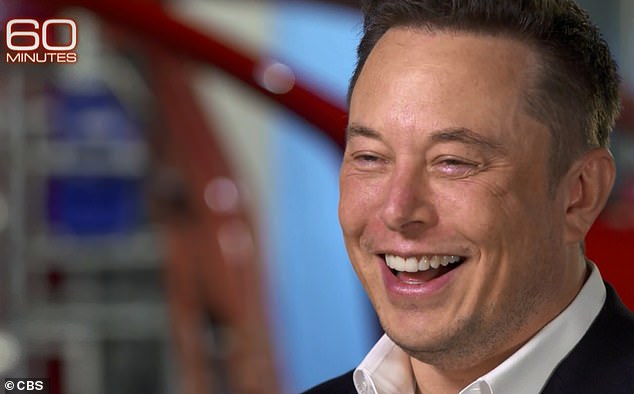 Musk was jovial in other parts of the interview where he dismissed any suggestion he smoked marijuana habitually or that Tesla could not survive with him at the helm, an idea he said was ‘hilarious’

Elsewhere in the interview, Musk lamented the ‘unfair’ and ‘outrageous’ criticism he received earlier in the year from naysayers who did not think he would meet production targets.

He had set himself a goal to produce 5,000 new cars per week, a tall order which required him setting up a third, makeshift production line in the parking lot of the Tesla factory in Fremont, California, to meet.

If he had not introduced the third production line, the company would have folded, he said.

‘There has been relentless criticism – relentless, outrageous and unfair. What actually happened here was an incredible American success story.

‘All these people work their ass off day and night to make it happen and they believe in the dream.

‘That’s the story that really should be told,’ he said.

‘If you’re trying to step up to something which is 1000% more than any other program you have ever done, you have to bet the company. There is no option.

‘It was life or death. We were losing $50, sometimes $100million a week. We were running out of money. That’s scary,’ he added.

Praising his team, he continued: ‘This whole thing that you see here was a pretty miraculous effort from the whole team to create a general assembly line out of nothing in 3 weeks.

‘Those betting against the company by conventional standards were right that we would fail but they just did not count on the situation nor creating an assembly line in a parking lot in a tent.

‘It increased our output by 50 percent.’

Denholm has been on Tesla’s board for five years.

She is the chief financial officer and strategy head at Telstra Corp. Ltd., Australia’s largest telecommunications company, but will step down from that company after a six-month notice period and work at Tesla full-time.

Elsewhere in the interview, Musk played down a video of him smoking marijuana earlier in the year which spiked investor and consumer fears in the company.

He said it proved he did not know how to smoke cannabis or any other type of drug. 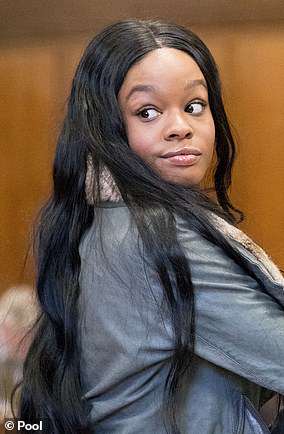 May 2: Musk holds an earnings conference call where he calls analysts’ questions ‘boring and boneheaded’

May 3: Musk expands his stake in Tesla to 20 per cent, acquiring $9.85million in shares

July 15: After offering up a team of engineers to rescue a group of Thai boys who became stuck in a cave, Musk launches an astonishing attack on a local diver who tried to save them. He calls the man a ‘pedo’ in retaliation for his criticism of Tesla’s failure to get to the children and save them

August 7: Musk tweets that he is taking Tesla private for $420-a-share. It leads to an increase in stock price which saw his individual net worth rise by $1.4billion that day

August 8: The Wall Street Journal reports the SEC has opened an inquiry into the tweet

August 13:  Banks takes to Instagram, angry that she apparently had to ‘wait around for Grimes to coddle her boyfriend’ when they were due to make music. She alleges that Musk spent the weekend ‘scrounging’ for investors after the tweet which she said he posted while high on acid. 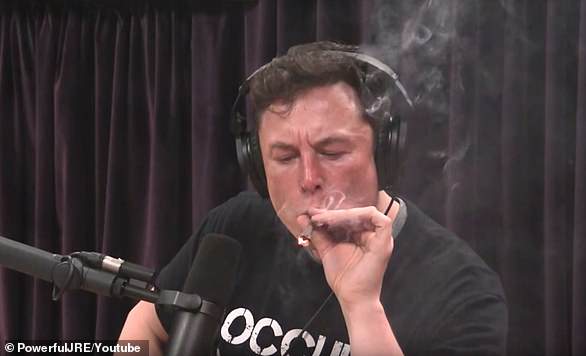 On September 7, Tesla shares hit a six month low after Musk smoked cannabis during a podcast

August 16: Musk admits in a New York Times article that Banks was at his house. Elsewhere in the article, he complains about the ‘excruciating toll’ of Tesla. Stocks react unfavorably

August 19: Banks sends Musk a letter saying she feels ‘terrible’ about everything

August 24: He vows to keep Tesla public and says he will remain at the helm

September 7: Musk drinks and smokes marijuana during a podcast. Shares tank by 11 per cent and Chief Accounting Executive Dave Morton’s resignation is announced. On the same day, the HR chief and head of communications also leave

September 18: The Department of Justice launches a separate investigation into Musk’s tweet

September  27: Musk is sued by the SEC after walking away from a deal which would see him pay $10million in fines, step down as chairman. Shares plummet by 14 per cent

September 29: Musk settles with the SEC

October 4: Musk refers to the SEC as the ‘Shortseller Enrichment Commission’ in a tweet

October 8: Tesla shares plummet to $250, its lowest in a year