A Muslim community leader says Covid has ripped through hundreds of immigrant families because they underestimated the Delta strain and didn’t stop visiting relatives until the outbreak spiralled out of control.

Zia Ahmad, publisher of the Australian Muslim Times, concedes many Muslims carried on visiting their extended families during lockdown, because doing so during the first wave did not cause a huge spike in case numbers.

Sydney’s Delta outbreak began in the eastern suburbs in June, but it quickly took hold in the west and south-west – and more than 80 per cent of Friday’s 882 new cases were confined to those areas.

Most of the 12 local government areas ‘of concern’ have large immigrant populations, including Fairfield, Canterbury-Bankstown, Campbelltown, Blacktown and Liverpool.

‘It is possible that some large families, who are very close and like to visit each other often, haven’t taken the Delta strain seriously enough,’ Mr Ahmad, 68, who lives with his four children and elderly parents, told Daily Mail Australia.

The Ahmad family at Bonyrigg has closed its doors to the usual Sunday family gatherings of up to 40 people in order to protect the health of grandmother Jamal Ara Ahmad, 89 (pictured second from left) and Qazi Ashfaq Ahmad, 91 (front, centre). Also pictured ( from left) are: Mehar Ahmad, 65; Zia Ahmad, 68; Mohinbah Ahmad, 32; and Rubinah Ahmad, 30 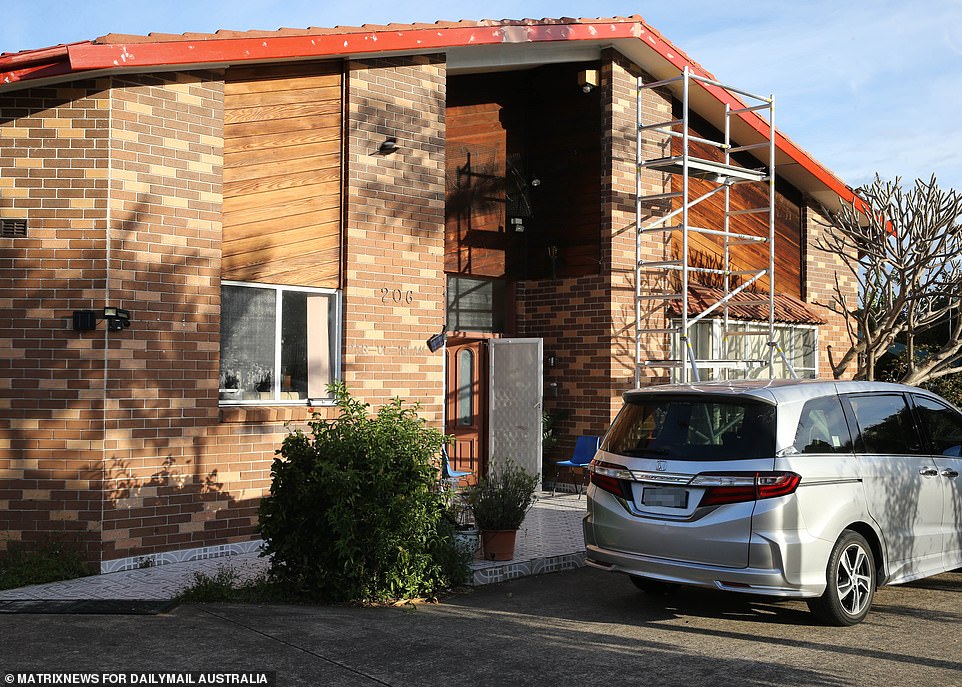 Mr Ahmad, a Muslim community leader says immigrant families were caught out by the viciousness of the Delta Covid strain and didn’t change their behaviour until recently, contributing to the virus spread. He used to entertain up to 40 members of his family at his Bonyrigg home (pictured) each Sunday until Covid struck, now the family connects on Zoom 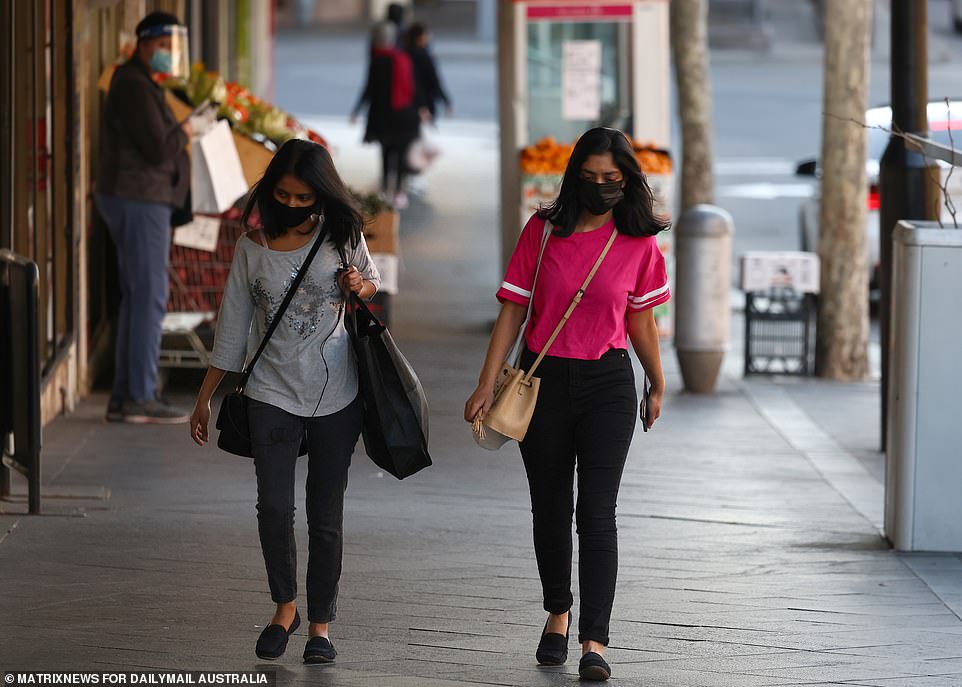 ‘Last year they still visited their families and there was no effect, so they are used to last year’s habits. That could have contributed because the Delta strain is very different.’

Mr Ahmad said spread through large extended families is a ‘cultural and not religious issue’.

‘For a lot of immigrant families from different backgrounds it’s part of life to stay in contact with their extended family. If you look at Indian people, it wouldn’t matter if it was Christians, Muslims or Hindus,’ he said. 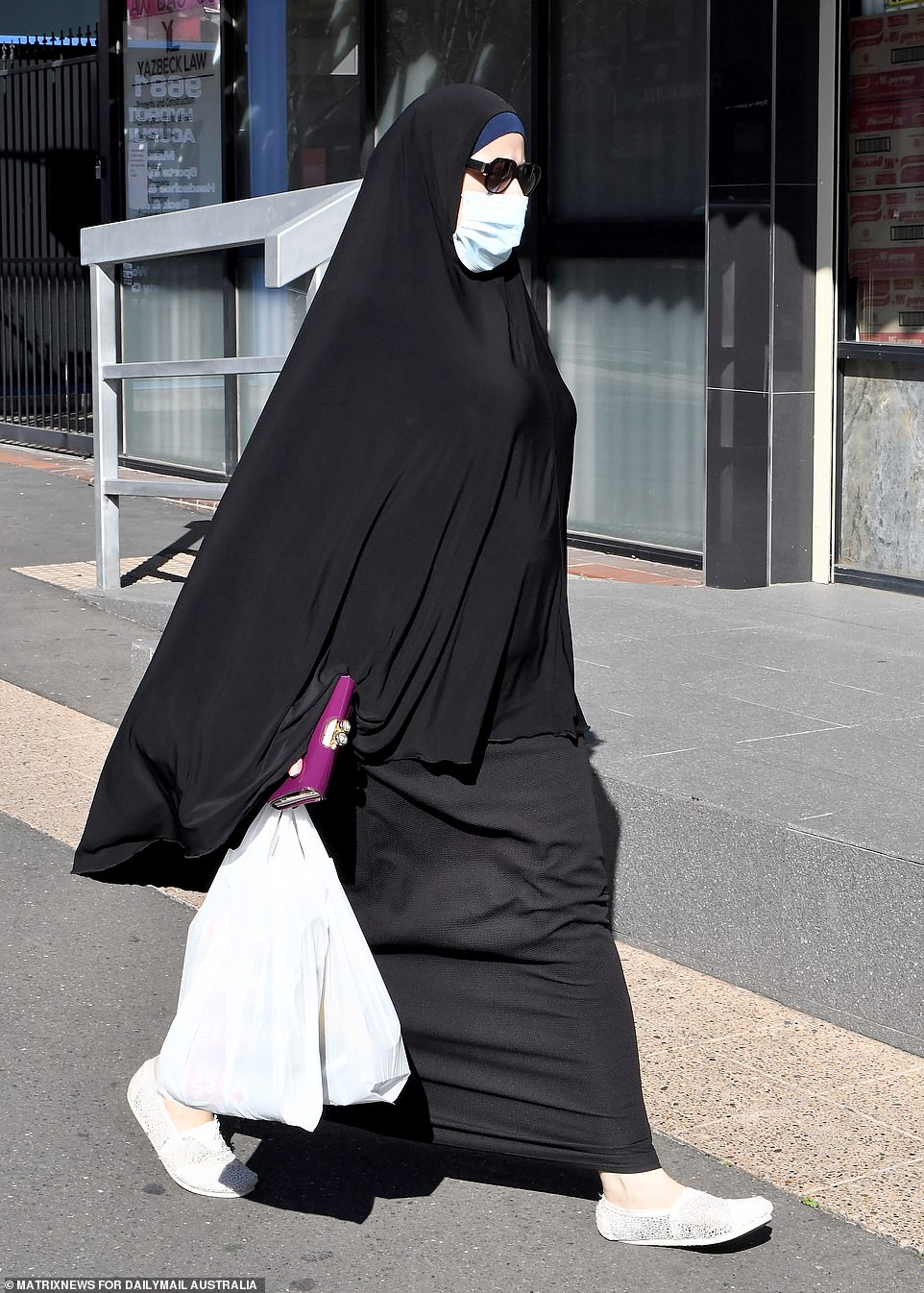 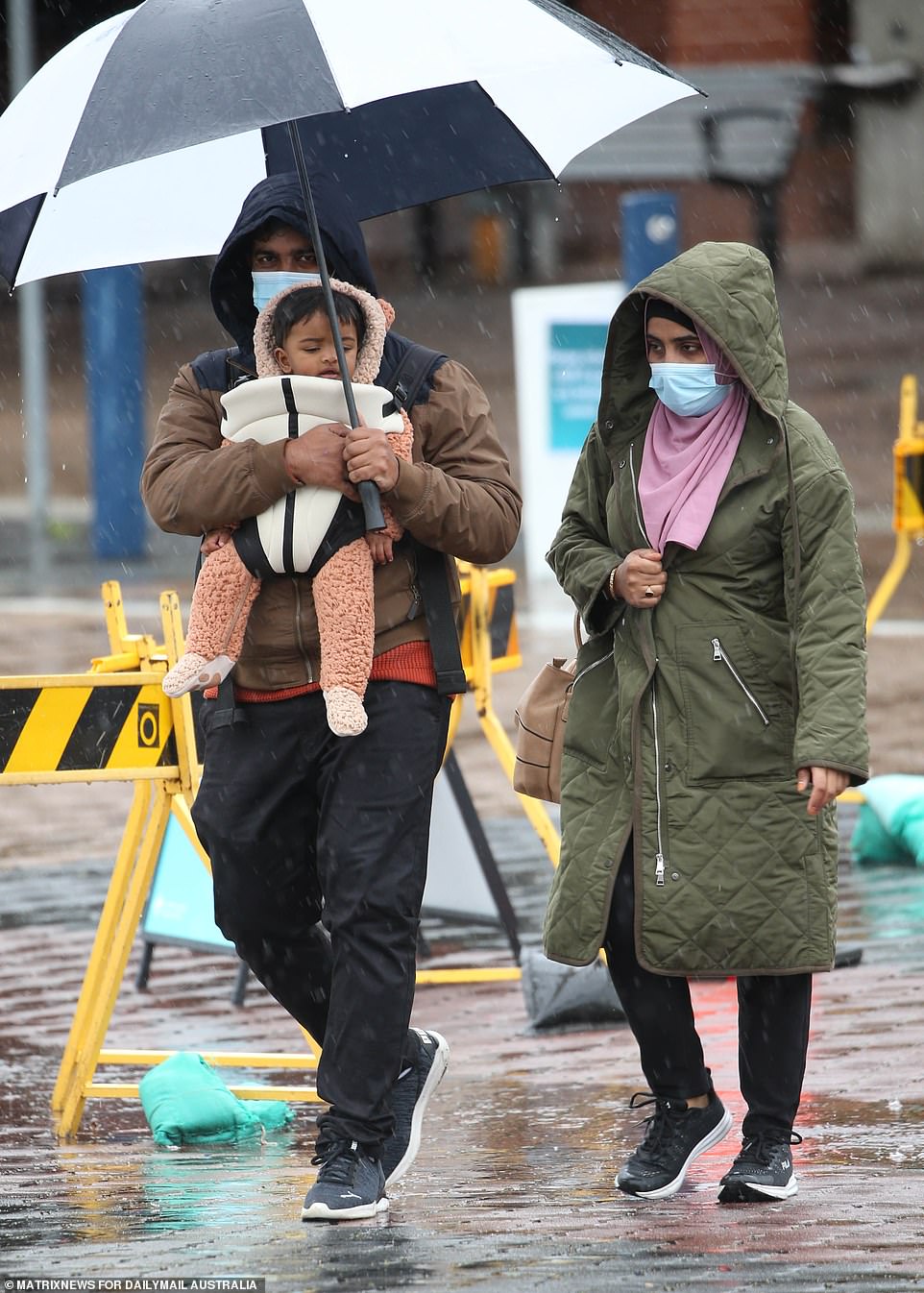 He added that it was ‘particularly sad’ that the some of the best qualities of immigrant families – their loyalty, support and commitment to one another – had been taken away from them.

In early August, AIaneta Isaako, 30, was found dead from Covid in her home in Blacktown. 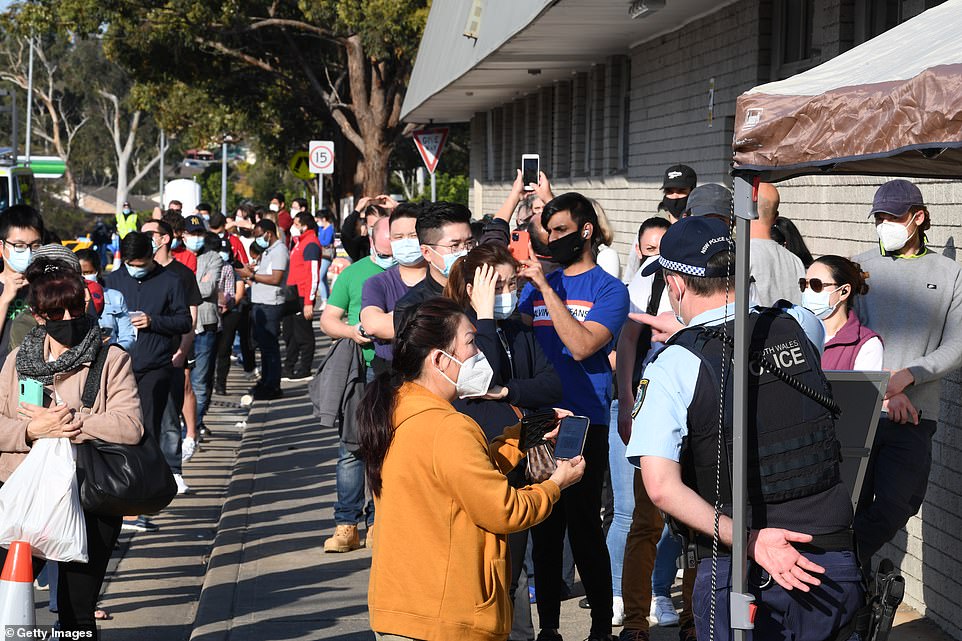 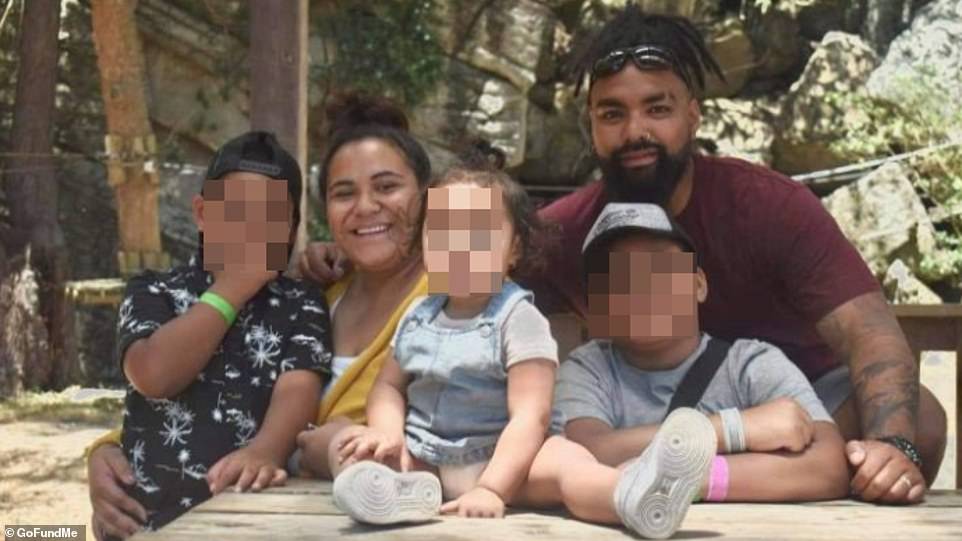 In early August AIaneta Isaako, 30, was found dead from Covid in her home in Blacktown. Her husband Sako was admitted to hospital soon after

Her husband Sako was admitted to hospital soon after.

Premier Gladys Berejiklian consistently pleaded with large migrant families to stop visiting relatives in many of her daily briefings.

Many community groups complained that NSW Health solutions did not make use of grassroots organisations to spread clear messages in recent months – such as youth groups, community centres and places of worship. 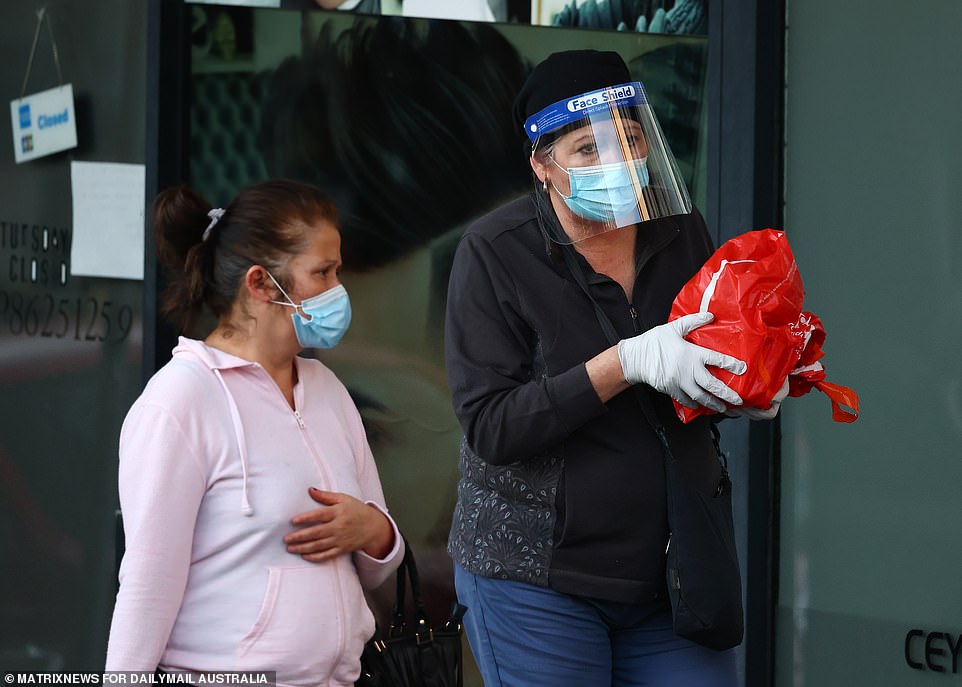 Two women walk together at Blacktown during lockdown

Mr Ahmad shut the doors of his family home at Bonyrigg to family visits partly because he was so worried for his 91 year old father, Qazi Ashfaq, and his 89-year-old mother, Jamal Ara.

Bonyrigg is in the Fairfield local government area, one of the LGAs of concern.

Instead the family connects via Zoom each week.

‘Before Covid we would have 35 to 40 family here every Sunday. We miss seeing our grandchildren terribly,’ he said.

‘But that is probably what saved us,’ he said, pleased that nobody in his extended family had tested positive for Covid and most were vaccinated at least once. 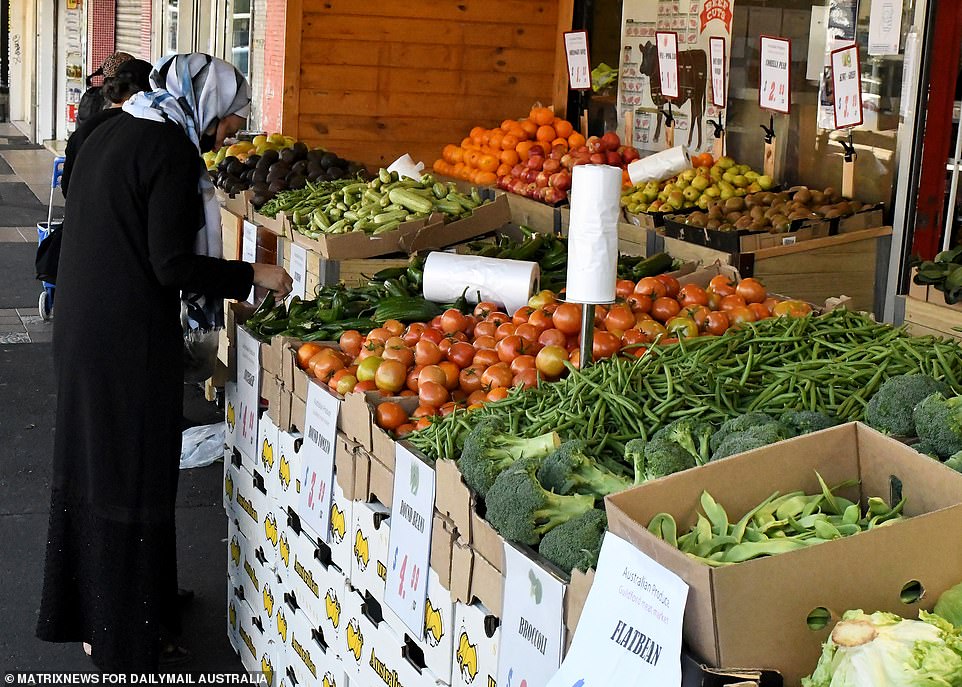 A woman shops for fruit at Guildford during lockdown 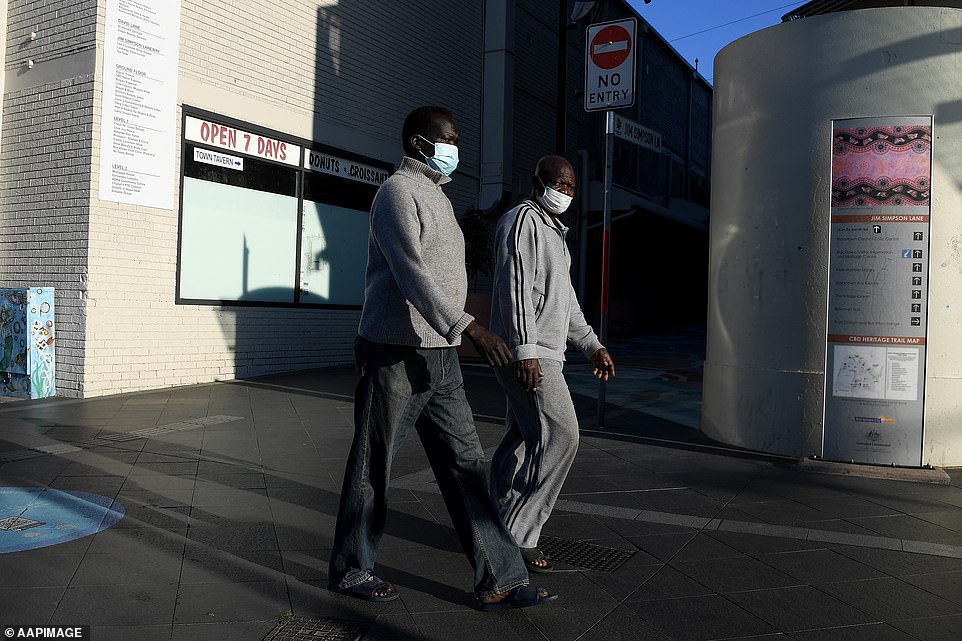 Most of the 12 local government areas ‘of concern’ have large immigrant populations, including Fairfield, Canterbury-Bankstown, Campbelltown, Blacktown and Liverpool. Two men are pictured walking at Blacktown

He and his wife, Mehar, and four daughters have stayed busy exercising, bingeing on Bollywood and ‘social movies’ on Netflix and also reaching out in their community via social media and their news website.

Mehar admitted Zia controls the TV remote control in their home, but joked ‘I am the neck, I can turn the head anytime I want.’

She said in her experience most Muslims are happy to comply with guidelines when they understand because ‘they are very happy to be living in this country’.

Mr Ahmad says the worsening Sydney outbreak prompted him to run webinars and articles in his newspaper encouraging people to get vaccinated and debunking myths.

‘There was a lot of misinformation out there, people saying the vaccine was non-halal or unsafe,’ he said. 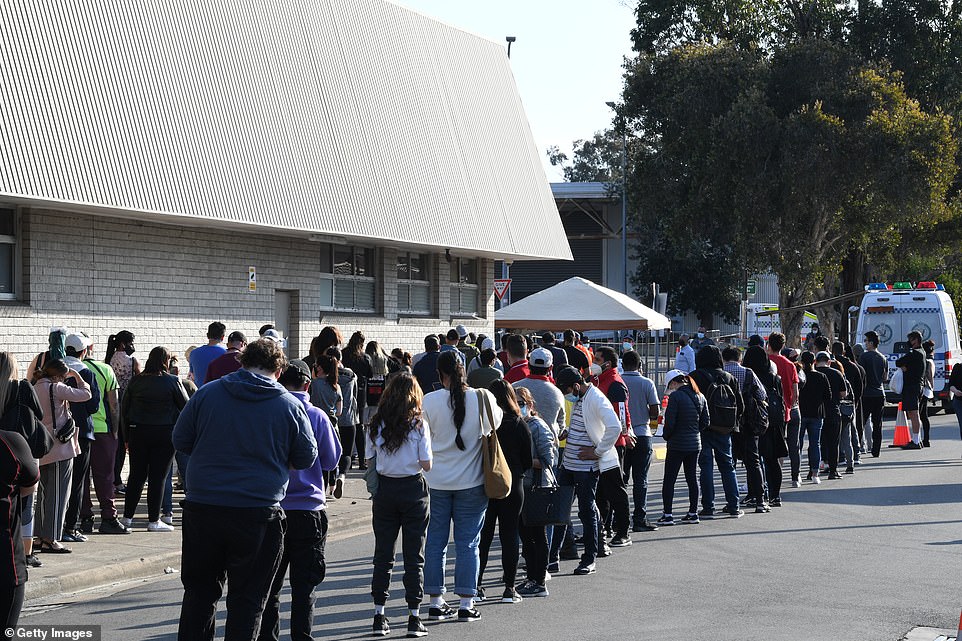 ‘We got respected Asian doctors talking about how the vaccine is permissible under Islam, that it is a life-saver and is in fact a gift from God and they should have no hesitation in having it.’

Shady Elriche, president of Rahma Mosque at Guildford said when meeting places were shut down, the ability of leaders to pass on clear messages was impacted.

‘Leaders were slower in getting the information out there, but the platforms for our leaders are things like community centres, PCYCs, youth clubs, Mosques – when those places are closed our tools were taken away and the messaging becomes more difficult,’ he said. 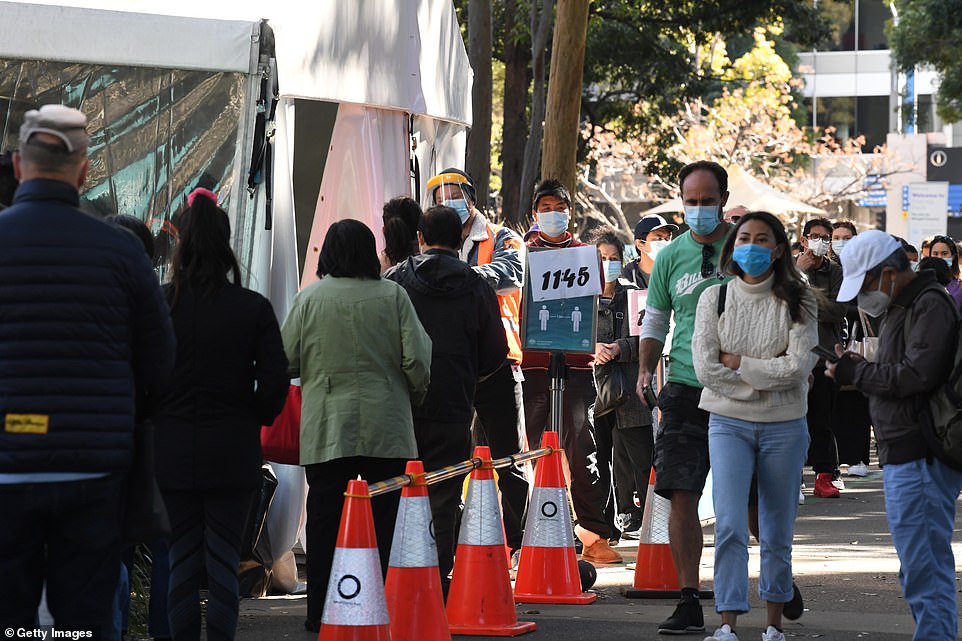 Mr Elriche said people ‘didn’t understand the severity of the virus’ for a long time and people were fearful of the AstraZeneca vaccine because of official advice – and clashing statements between states.

Queensland’s official health advice was for people under 40 to avoid AstraZenenca when the Prime Minister said it was a personal choice.

‘It doesn’t help when the government changes the narrative too, even now they have just moved away from the idea of eliminating Covid,’ Mr Elriche said.

‘The meaning of some of the health orders got lost when have one public health order after another overlapping, and you have set different sets of rules for different LGAs.

‘We understand the health orders, and we share that information but when they change five days later, it starts to get confusing.’ 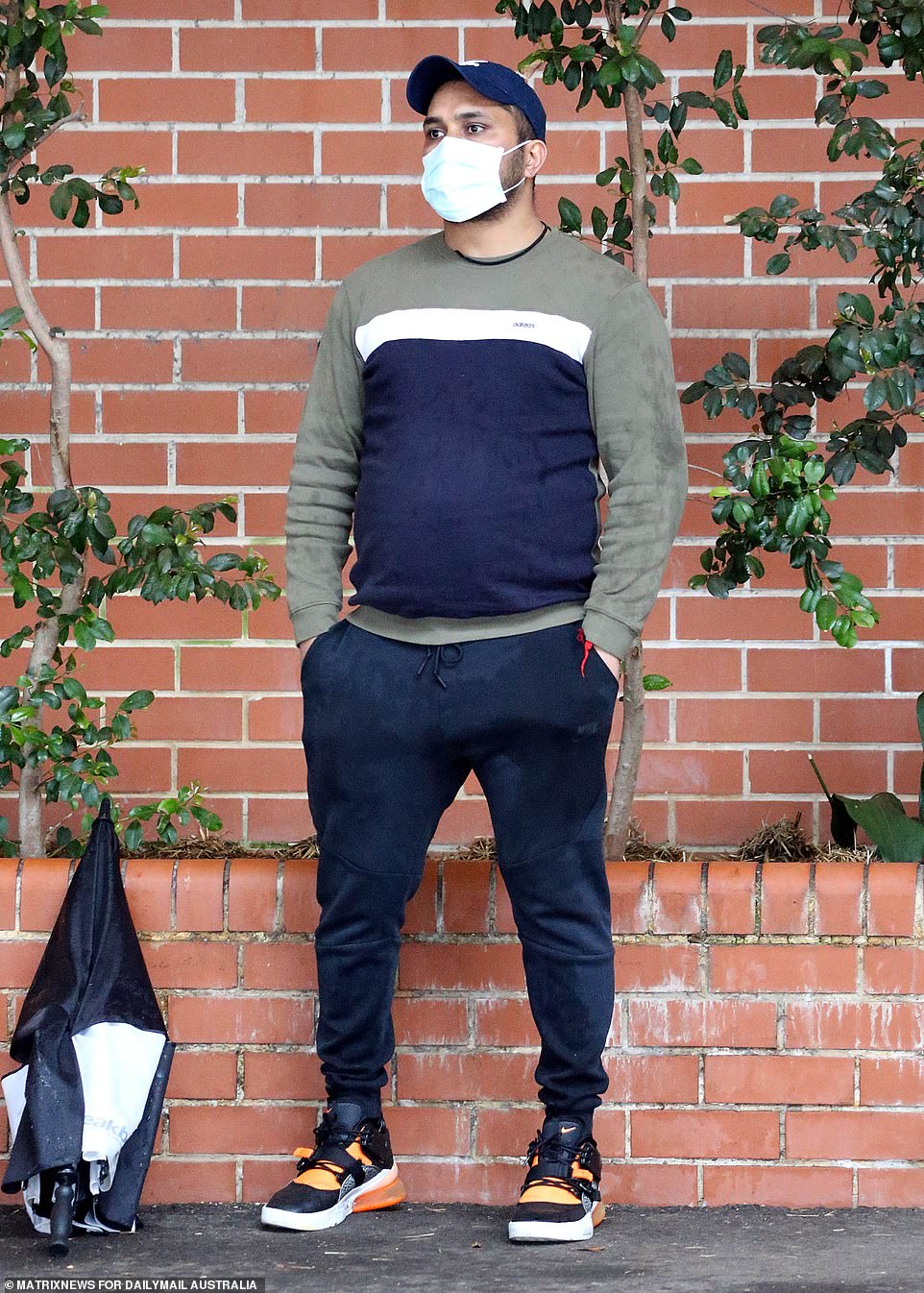 How Sydney’s Muslim battlers are coping

Poverty in south-western Sydney is increasing under the lockdown, said a prominent Muslim community leader.

Shady Elriche, president of Rahma Mosque at Guildford, said requests to the mosque for food parcels and assistance to pay bills are up about 30 per cent in the current lockdown compared to last year.

‘People that are living paycheck to paycheck who couldn’t work used up their savings in the first lockdown,’ he said.

‘The continued lockdowns and restrictions on earning income have increased the impacts and the financial stress.

‘People know their neighbours, and things have just gotten worse for the people living paycheck to paycheck.’

Mr Elriche says small business owners have been hit hard because they have had to continue paying overheads such as insurances and rents.

‘But when they get back to work they will recover because they have the capacity to earn.’

‘It’s the employees, the blokes with a backlog or rents and utility bills to pay who will take two years to get back on their feet.’