Muslim leaders call for polygamy to be legalised in Russia

Muslim leaders have called for polygamy to be legalised in Russia in order to ensure ‘women’s rights’ and reduce ‘sinfulness and fornication’ in the state.

Ildar Alyautdinov, the mufti of Moscow, told state-owned news agency RIA Novosti that allowing men to have multiple wives would help solve a number of social problems in Russia.

He added that there would be ‘much less sinfulness and fornication, which is spreading so rapidly’ if polygamous relationships were no longer illegal.

Alyautdinov also claimed that women are currently ‘completely unprotected’ in the social sphere due to the absence of Islamic Sharia law in the country.

Ildar Alyautdinov (pictured), the mufti of Moscow, said polygamy would ‘guarantee women’s rights’ and put a stop to ‘sinfulness and fornication, which is spreading so rapidly’

‘Legalising polygyny would guarantee women’s rights’, he said. ‘It’s important to create a legal mechanism of protection, so that women could become full-fledged second spouses.’

‘This will help solve many social problems. In addition, there would be much less sinfulness and fornication, which is spreading so rapidly’.

Alyautdinov made clear he only supported polygyny, in which a man has multiple wives, rather than polyandry, in which a woman has more than one husband.

He said this is because there are 10 million more women in Russia than men, according to the Federal State Statistics Service. Alyautdinov also claimed there are many women who remain single after becoming ‘widowed or divorced’. 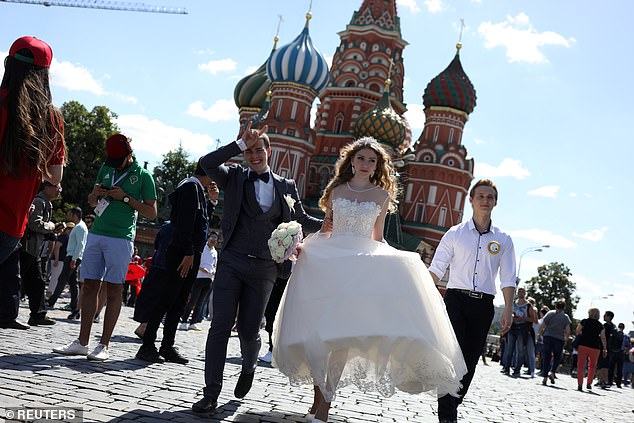 The mufti’s comments come after Sheikh Ravil Gainutdin, who is the head of the Spiritual Administration of Muslims in Russia, said he considered it ‘appropriate’ to legalise polygamy in Islamic regions.

Informal polygamy does already exist in some Muslim areas, including Tatarstan, Chechnya, Dagestan.

He said taking multiple wives was better than men ‘having 40 lovers and not taking any responsibility’ of them and any illegitimate children.

The Russian Orthodox Church, however, responded to insist ‘monogamy is associated with respect for the roles of man and woman and the recognition of their equal dignity in marriage’.

A spokesman added that the Orthodox Church believes relationships outside of marriage ‘jeopardise the dignity of man and woman, destroy families and devoid both spouses of happiness’, the BBC reported.