‘Murdered for no reason’: Sydney man may have been shot dead in a case of mistaken identity — as police release new footage

Police have released new footage of a luxury car of interest in a south Sydney shooting which left one man dead and another injured.

Mustapha Naaman, 29, and another man, 23, were gunned down in a Hurstville carpark on McMahon Street on January 30 after watching a boxing match with friends.

The pair were found by emergency services inside a white Mercedes with gunshot wounds.

They were treated at the scene before being rushed to hospital, where Mr Naaman later died.

Following extensive investigations, Homicide Squad detectives are exploring whether the shooting was a case of mistaken identity.

Mustapha Naaman, 29, (pictured) was fatally shot inside a car in a Hurstville carpark in Sydney’s south earlier this year

Strike Force Datos detectives have released CCTV vision of a grey 2018 Porsche Macan seen travelling near Macmahon Street around the time of the shooting as they urge anyone with information about the vehicle or incident to come forward.

‘Our inquiries suggest Mr Naaman was an innocent man who was murdered for no reason after attending a boxing event with friends,’ Det Supt Doherty said in a statement.

‘Detectives have established that a prominent member of an alleged organised crime network was also in attendance at the same event as Mr Naaman, however, had left the venue earlier in the evening.

‘We believe this is a case of mistaken identity – Mr Naaman had no connection to any feuds between criminal organisations.’

The Porsche, with Queensland registration, had been stolen from a home in Yowie Bay in November 2020 and was dismantled after the shooting.

‘Someone must know where this vehicle was stored from the time it was stolen to when it was used in the shooting,’ Det Supt Doherty said. 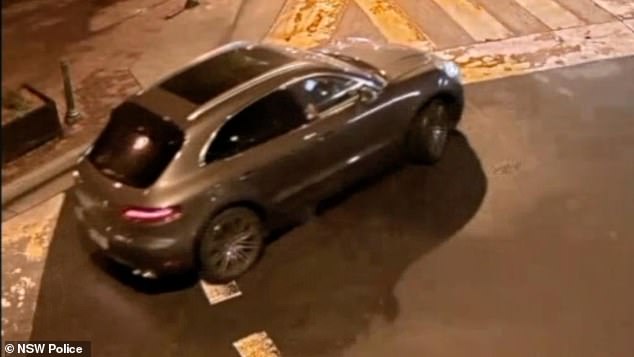 Three people are believed to have been in the Porsche, which was first detected travelling from Auburn to Hurstville, then back in the same direction after the shooting.

Parts of the Porsche were found at properties in Greendale and Liverpool in May.

Anyone with information or who attended the boxing event at the Hurstville Entertainment Centre that night and may have seen or heard something suspicious is urged to come forward.