My chest pains are terrifying – so why are tests all clear? DR ELLIE CANNON answers your questions

I keep getting severe pains in my chest. It happens when I’m quietly reading or in bed. Though it usually lasts for ten minutes at most, it’s often unbearable and frightening. I have seen a doctor who ordered tests, but they all came back normal.

Chest pain is a problem we GPs see a lot, but that doesn’t mean it’s straightforward to treat.

When it relates to the heart – known as angina – it’s a symptom of underlying coronary heart disease, which can lead to a heart attack.

Chest pain is a problem we GPs see a lot, but that doesn’t mean it’s straightforward to treat, writes DR ELLIE CANNON

You’re more at risk from Covid than a jab allergy

When the Pfizer jab was launched last month, two healthcare workers had a reaction after being vaccinated.

Both recovered fully after a short time, but regulators clamped down on giving the jab to anyone with a history of serious allergies.

I’ve since been inundated with letters from worried readers with all sorts of allergies wondering what they’re supposed to do. 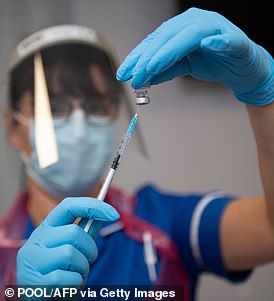 But now health chiefs have ruled that both the Pfizer and Oxford AstraZeneca vaccines are safe for most people with allergies.

Only those who are known specifically to have a reaction to any of the ingredients in the vaccines will need to avoid it, but how do you know if that’s you? I wish I could tell you.

At this stage, not even allergy charity Anaphylaxis UK seems to be able to give me specific guidance on this.

My best advice? A million people in the UK have had a jab now, and we’ve not seen anything worrying.

Covid is a killer and a far greater risk than the small possibility of a reaction.

Typically it is brought on by exercise or exertion and would confidently be ruled out as an issue with cardiac investigations when the heart is monitored while a patient exerts themselves, usually on a treadmill, as well as other tests.

But there are a huge number of other causes, including problems with the lungs, the stomach, the muscles between ribs, the breasts and even stress and anxiety.

We advise patients to keep a pain diary – write down when the pain happens, for how long, with as much detail, and which activities make it worse or better.

For example, a pain while you’re in bed is often related to the stomach and reflux as acid regurgitates up the gullet when lying down.

If breathing deeply makes the pain worse, it could indicate a lung or muscular problem.

Since reflux and other digestive conditions are very common, often GPs will suggest a trial of stomach medication to see if it helps the problem. This is an easy way to test the possibility without any hospital visits or invasive investigations.

Sadly, a few individuals live with intransigent chest pain for years, but these are the minority, as, in the main, investigations and trials of medication find the root cause.

Two weeks ago I discovered a swelling in my left armpit – there’s no lump I can feel, but it is painful and the pain extends slightly further up the inside of my arm and down the side of my left breast. It is so painful, I can’t lift a shopping bag. My GP asked for photographs, and prescribed antibiotics. When the pain continued, a few days later I got an appointment with a nurse, who told me it was a cyst and said I was on the right treatment. But the pain still hasn’t gone away.

Lumps and swellings are always a reason to consult your doctor. They can be a sign of cancer, no matter where in the body. It usually isn’t, but this needs to be confirmed by a GP.

A lump in the armpit is particularly important as this area contains glands called lymph nodes that usually can’t be felt but can become larger, hard or sore when fighting an infection.

The lymph nodes in the armpit can also become enlarged if there is a problem in the breast, including cancer. If breast cancer spreads, it first goes to those lymph nodes, which is why a lump must be checked. 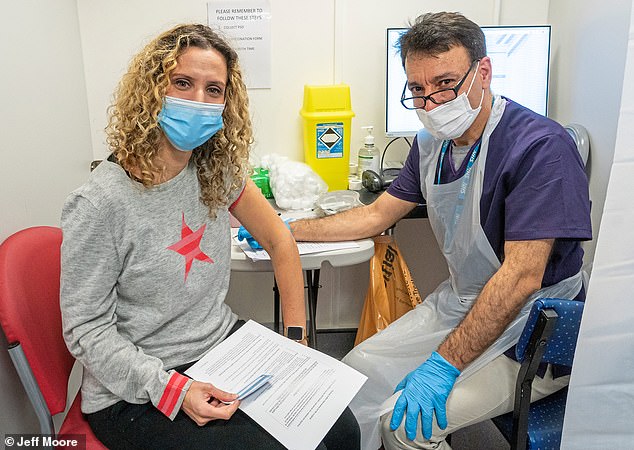 Dr Ellie Cannon, pictured being given the first of her two Covid jabs last month

It was a sensible decision to ban BOGOF (buy-one-get-one-free) deals on junk food in supermarkets and online.

It has been announced that from April 2022 these kinds of promotions, which only ever seem to be on fizzy pop, sweets and cakes, will be outlawed. It makes sense, to me, to ban them. We know the sugar tax worked, as it forced manufacturers to reformulate foods to be lower in sugar, and so less damaging.

Diets tend not to work because people ‘go back to eating normally’. The problems begin when ‘normal’ includes too many high-fat, high-salt and high-sugar foods. I believe that BOGOF deals normalise poor dietary choices by encouraging us to buy snacks and treats.

Here’s an idea: put these deals on fruit and veg, or staples such as bread and tins of beans.

Infections within the sweat glands and hair follicles of the armpit are very common and the most usual cause of a painful, enlarged lump. This would normally be treated with an antibiotic. If it doesn’t clear up, a stronger dose may be needed.

If the lump is particularly large and sore, an abscess has developed. This is a pocket of pus under the skin that appears as a painful, hard lump and may require a prolonged course of antibiotics, intravenous antibiotics or even a procedure in hospital to drain the fluid.

Any lump that doesn’t respond to treatment should always be physically examined by a GP.

In March, I came out in a rash all over my body: hives on my neck, chickenpox-type spots on my torso and limbs and what looked like blood blisters on the veins in my hands and arms. Blood tests suggested lupus. I was prescribed hydroxychloroquine and referred to a rheumatologist and dermatologist to get the diagnosis confirmed, but I have yet to be given an appointment. The rash has cleared up but I’m concerned at having to wait until the pandemic ends before getting a definitive diagnosis.

Lupus is an autoimmune condition, meaning that the body makes antibodies that attack healthy tissue rather than an infection as they should do. These cause inflammation within the skin, joints and other parts of the body, including the heart and kidneys. It also causes tiredness.

There are two types of lupus: discoid lupus causes only rashes, whereas the more common systemic lupus, or SLE, affects the whole body.

Lupus cannot be cured but medication can keep symptoms and complications at bay.

It is hard to make predictions for anyone with lupus as there is a huge spectrum among sufferers. In a small percentage of people it will be life-threatening due to organ damage such as kidney failure. For this reason, it’s important to see a specialist at the earliest opportunity.

Of course, there have been delays with some referrals because of the Covid pandemic, but it’s always worth politely persisting with the GP, and seeing if you can get in touch by phone or email with the secretary of the specialist you’ve been referred to.

Explaining that you are worried is a good start.