What a tragedy it is that the Irish maverick George Bernard Shaw, who once ruled the West End, is today considered such box-office poison.

The 1956 show is one of the most literate musicals ever written. Apart from being a satire on the Queen’s English, it also preserves Shaw’s socialist attack on the great English class divide — the thing that gives the show its bracing whiff of cordite. Rodgers and Hammerstein would have done a very different, much cheesier job. 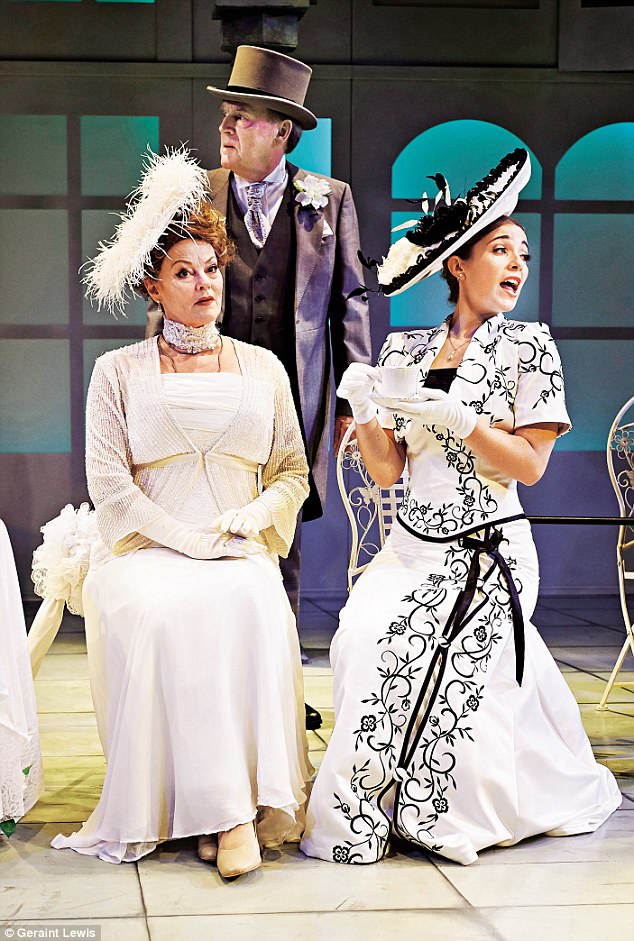 The 1956 show is one of the most literate musicals ever written. Above: Susan Kydd as Mrs Higgins, Eric Carte as Colonel Pickering and Bethan Nash as Eliza 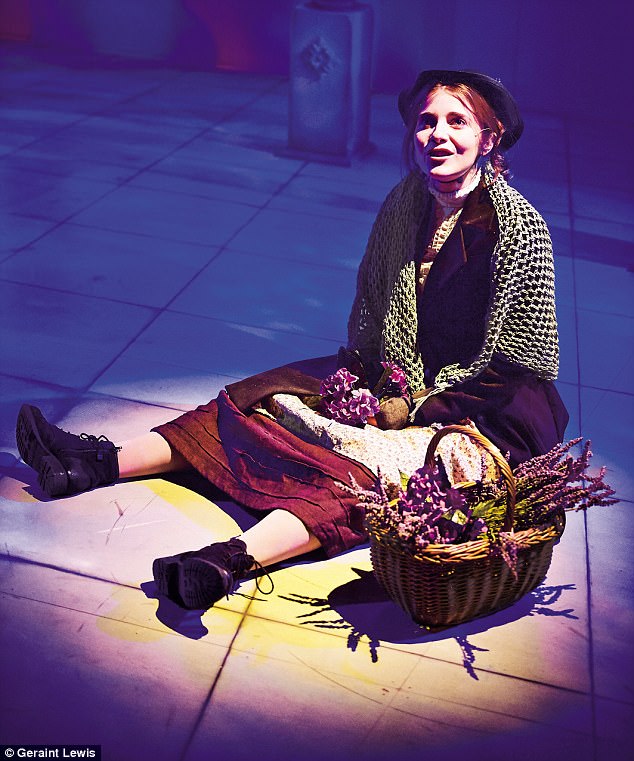 Bethan Nash is a fine-voiced, proud Eliza, who is the victim of such gross sexism and domestic abuse that you wonder why today’s right-on theatre police haven’t banned this show for good

Rex Harrison and Audrey Hepburn famously starred in the film version. Julie Andrews, who first played Eliza on stage, was cruelly snubbed for the screen part. Even if Hepburn had turned it down, next in the queue was Elizabeth Taylor.

But despite the huge, rather smothering reputation of the film, the musical here comes up fresh, even reinvigorated in this pocket production by Joseph Pitcher, who both directs and choreographs. This version has only 12 actors and (out of sight) four musicians, but it gets across the story with pace and panache.

Phonetics professor Henry Higgins discovers the cockney Eliza – ‘So deliciously low. So horribly dirty’ – selling flowers in Covent Garden. He bets his chum Pickering that he can pass her off as a duchess at the Embassy Ball within six months.

The story is as much a comedy about Higgins’s emotional journey – he’s all cold bachelor complacency – as it is about transforming Eliza’s guttersnipe vowels. Love – or at least mutual need – finally blossoms.

Bethan Nash is a fine-voiced, proud Eliza, who is the victim of such gross sexism and domestic abuse that you wonder why today’s right-on theatre police haven’t banned this show for good. Here, Higgins and Pickering clearly owe a debt to Holmes and Watson. Martin Fisher’s sprightly young Higgins even sounds a bit like Benedict Cumberbatch’s Sherlock. Eric Carte’s Pickering has the right demeanour of a retired military gent.

Phil Snowden is a wonderfully feisty geezer as Eliza’s dustman dad, doubling up as an interpreter. Felicity Duncan is both kindly housekeeper and stately monarch, and Alex Hammond a fine, silly-ass Freddy. I liked, too, Susan Kyd as Higgins’s acidic mother. You can see where he gets it from.

Sumptuously presented in 1912 style, with elegant costumes by Natalie Titchener, this version preserves Shaw’s combative, comic voice while allowing love to sweeten the professor’s nature. Or does it? The ending is ambiguous.

Not the biggest, swirliest production you’ll ever see, but it truly works because it has the right energy and polemical spirit. And of course all the songs – from Wouldn’t It Be Loverly to I’ve Grown Accustomed To Her Face – are simply irresistible.

Those who loved Shockheaded Peter – the 1998 awardwinning show based on the rather gruesome German Struwwelpeter children’s story – will warm to this off-the- wall, slightly disturbing but also uplifting tale. 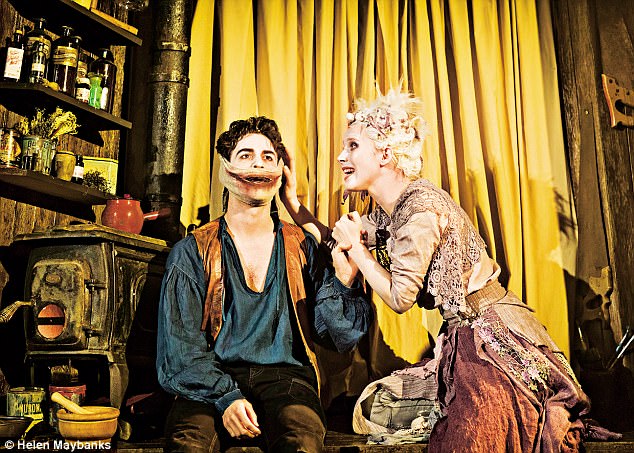 Tom Morris’s production creates a unique world that draws you in, and the puppetry is wonderful. Above: Louis Maskell as Grinpayne and Sanne den Besten as Dea

The Grinning Man is based on a novel by Victor Hugo, best known for Les Misérables, which was also turned into a musical (quite successfully, I believe).

This also shares the theme of one man’s journey to discover the truth and right a wrong, though is less epic in tone The score, by Kneehigh’s Carl Grose, Tom Morris, Tim Phillips and Marc Teitler, certainly has some of Les Mis’s belting, soaring quality in this story of Grinpayne, mutilated as a child and left with a rictus of a mouth, literally grinning from ear to ear.

After ending up in a freak show, he becomes a star not just because of his appearance but his transformative effect on others, notably the corrupt and hedonistic ruling royal family.

The only person who really loves him is a girl who cannot see his disfigurement, the blind Dea (Sanne den Besten). Tom Morris’s production, which uses puppets to tell parts of the story, creates a unique world that draws you in, and the puppetry is wonderful.

A large grey wolf is chillingly rendered – hardly surprising since Morris co-directed War Horse. As Grinpayne, Louis Maskell gives a haunting, powerful performance – even singing though a bandaged mouth – in this grim, Grimm-like tale but there’s humour and satire too as the squeaky-voiced new queen exclaims ‘A royal wedding and a nation at one!’ having vowed to mend her ‘broken’ country.

The production has been reworked since opening at Bristol Old Vic last year, and there are still places where it flags, but this is a quirky tale, ingeniously told.

The Hundred And One Dalmations

This show practically licks your face. It opens with a puppet parade including a scottie, pug, poodle and some cocker spaniels. But the stars are Missis and Pongo, the dalmatian couple who treat their owners, Mr and Mrs Dearly, as pets.

Debbie Isitt’s adaptation gets across the bare bones of the 1956 novel by Dodie Smith, who owned nine dalmatians. The plot is one of mass dognapping, masterminded by the story’s leading bitch Cruella de Vil (Gloria Onitiri – utterly psychopathic if lacking in comic relish) who pines for a spotty fur coat made from the skinned pups. 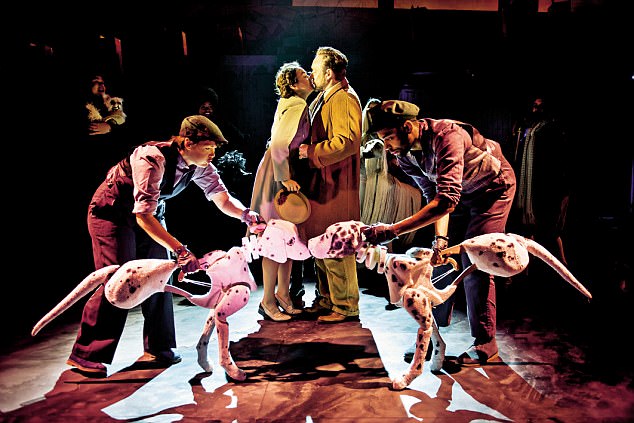 This show practically licks your face. It opens with a puppet parade including a scottie, pug, poodle and some cocker spaniels 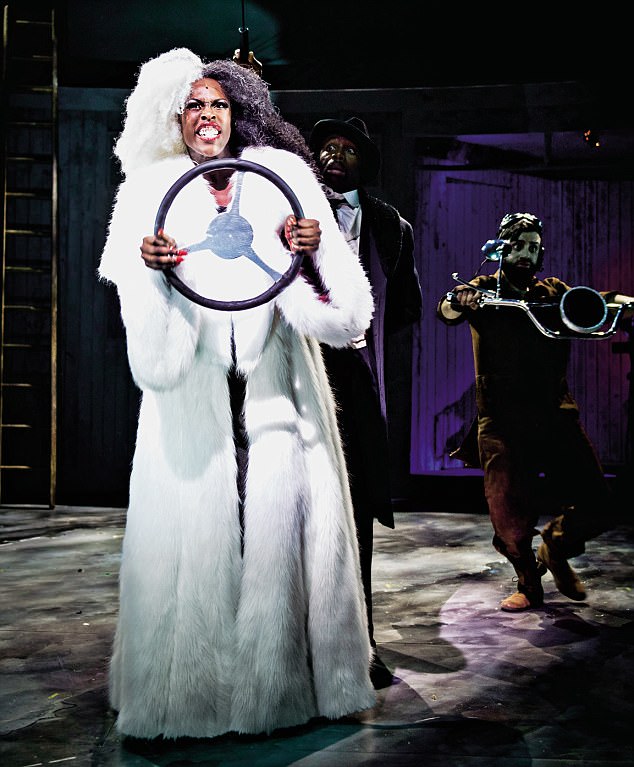 The plot is one of mass dognapping, masterminded by the story’s leading bitch Cruella de Vil (Gloria Onitiri – utterly psychopathic if lacking in comic relish)

Hats off to the puppetry director (Jimmy Grimes), whose stage litter knocks spots off the human cast. The dogs have only front legs, but they’re cute, uncannily canine and you hardly notice the handlers who voice them.

Jazzy songs (by James Frewer) do little more than pad out the action against a backdrop of a half-finished sketch of London.

The show is recommended for five-year-olds and up. But I suspect it’ll be the puppet pups, not the story, that kids will remember.