My haven, Hugo Vickers, 69, in the barn room of his country home in Wiltshire

My haven, Hugo Vickers: The royal biographer and broadcaster, 69, in the barn room of his country home in Wiltshire

Hugo Vickers, 69, (pictured) shares items of personal significance in the barn room of his country home in Wiltshire

I love St George’s Chapel, Windsor, and have been part of the chapel community since 1966 when I used to show tourists round on Sunday afternoons. I am now Captain of the Lay Stewards.

This mitre belonged to Bishop Eric Hamilton, Dean of Windsor from 1944 until his death in 1962 – and there are photos of him wearing it with George VI and Queen Elizabeth on the steps of the chapel.

When he died it was given to the Dean’s verger, whose daughter gave it to me.

In my teens, I spent long hours in the attic at home during the school holidays making models of people. I’m particularly proud of this one I created in the summer of 1968: Barbie’s boyfriend Ken, dressed up as a Knight of the Garter.

The ostrich plumes come from the Privy Councillor hat of Sir Samuel Hoare [the late politician]. I stitched the robes myself. He must be the best dressed of all the Kens in the world. 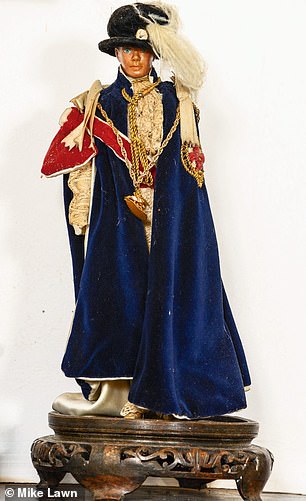 I campaigned in my teens for my late aunt Dame Joan Vickers when she became an MP – this is a portrait of her. On deciding to go into politics she asked Winston Churchill for his advice and he told her to wear a pretty hat.

She defeated Michael Foot in Plymouth, Devonport, in 1955 by 100 votes, and was the Tory MP for the seat for 19 years, then a life peer. She always campaigned in blue clothes, with blue hair for good measure.

I’ve been lucky enough to pick up a few coronation chairs over the years – the chair and stool on the left are from the Queen’s 1953 coronation, and the chair on the right is from George VI’s 1937 coronation.

Occasionally a friend will tell me about a chair they’ve spotted in a junk shop and I’ll snap it up for about £45.

I’d never buy one at auction because it would cost nearer £700. They make perfect dining room chairs as they were designed for people, wearing uncomfortable uniforms and robes, to sit on for hours on end.

5. EVER BRIGHT AND FAIR

I got to know Stephen Tennant – one of the socialites dubbed the ‘Bright Young Things’ for their bohemian lifestyle in 1920s London – while researching my biography of Cecil Beaton. This is a Maurice Lambert sculpture of him.

By the time I got to know Stephen, this once Adonis-like figure was an eccentric, reclusive old man living in a country house with his retainer, Mr Skull. He was slumped in bed with make-up on, but his brain was still razor-sharp.

The French-American aristocrat Gladys Deacon – the mistress and second wife of ‘Sunny’ Spencer-Churchill, 9th Duke of Marlborough – has fascinated me since I was 16.

This photo shows my son Arthur, now 22, the oldest of my three children, atop a Sphinx on which her head appears at Blenheim Palace, where she lived in the 1920s and 1930s. I tracked her down to a psychiatric hospital in 1975 when she was 94, and wrote her biography, called The Sphinx.

As told to York Membery. Malice In Wonderland: My Adventures In The World Of Cecil Beaton, by Hugo Vickers, is available now. Instagram: @hugovickers