My haven, John Caudwell, 69, in his Staffordshire manor house

My haven, John Caudwell: The billionaire and star of Ch4’s Britain’s Most Expensive Home, 69, in his Staffordshire manor house

By Angela Wintle For Weekend Magazine

John Caudwell, 69, (pictured) shared a selection of items of personal significance in his Staffordshire manor house

The goblet here was given to me by Karren Brady, then boss of Birmingham City FC, as a thank-you to my company Phones 4u for sponsoring the club. I started my mobile phone business while working as a used-car salesman and sold it in 2006 for £1.5bn.

The award next to it, from the Happy Hearts Fund, was given to me for my charity work. The cause closest to my heart is Caudwell Children, which gives care and support to sick and disabled children and their families.

Cycling is a passion of mine – and it was through cycling that I met my partner Modesta, who represented Lithuania in the women’s road race at the 2008 Olympics in Beijing. We met on a charity cycling event from Saint-Tropez to Monaco, fell in love and now have a ten-month-old son, William. 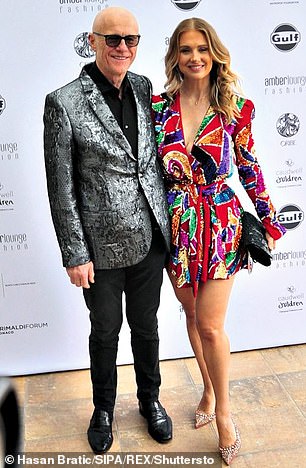 I wrote a poem for Margaret Thatcher when she attended a Conservative fundraising dinner at my home. We chatted all night. I tried to steer her away from politics but it was her whole life.

The week before, I’d heard someone give a superb speech about her. Knowing I couldn’t compete, I wrote this poem instead and presented it to her. She wrote this thank-you letter, joking I’d be the next poet laureate.

Broughton Hall is a manor house built in the 1600s – the Long Gallery is said to be haunted by the ghost of a boy shot by Oliver Cromwell’s soldiers in the Civil War. I bought the house in the 1990s.

Before then, it was a home to elderly nuns who used this room as their chapel. In front is one of my three Rolls-Royce Silver Ghosts – I see them as works of art.

I also own a 1902 Westfield, which I’ve driven in the London to Brighton Veteran Car Run. I finished third because I stopped for coffee and cake, though it isn’t strictly a race.

Here’s a model of the helicopter I fly around the country. It’s an expensive way to commute but it saves so much time – I can do what would otherwise be a four-hour journey in an hour.

I also pilot a plane, captain small yachts and own a 73-metre super-yacht, which I keep moored in the Mediterranean.

6. TRIBUTE TO THE FALLEN

This is me behind the Queen at the unveiling of the RAF Bomber Command Memorial in London’s Green Park in 2012. It commemorates the sacrifice of the 55,573 aircrew who died carrying out missions in World War II.

My philanthropy focuses on improving lives rather than building monuments, but I felt compelled to make a large contribution towards this memorial because the lack of one was an insult to the veterans and their families.

As told to Angela Wintle. Britain’s Most Expensive Home: Building For A Billionaire is available on All4. For information on John’s charity, visit caudwellchildren.com