She plays a hedonistic festivalgoer in summer’s hot British comedy, but Hannah Tointon is more geek than rock chick. She explains why she and her fiancé Joe Thomas – her co-star who she met on The Inbetweeners – are happy to be deeply unhip

Hannah Tointon has made her name playing the ‘hot girl’ every guy wants to hook up with in television shows from cult hit The Inbetweeners to teen soap Hollyoaks and ITV’s Mr Selfridge. And true to form, the 30-year-old actress is starring as yet another gorgeous sex-bomb in one of the must-see comedy movies of the summer, The Festival.

I’m so uncool. The music I play is Julio Iglesias, Disney songs and the soundtrack to the movie Chef

In the film, created by the team behind The Inbetweeners (writer Iain Morris and producer Damon Beesley), she is reunited on screen with her real-life fiancé, actor Joe Thomas – who she met eight years ago on the set of the multi-award-winning Channel 4 show.

‘What I love about The Festival is it goes against all the usual clichés,’ says Hannah, who is the sister of Strictly Come Dancing winner, actress Kara Tointon. ‘My character is this feisty, super-cool girl called Caitlin who’s been dating this square but sweet guy Nick [played by Joe] throughout university. He thinks they are going to leave uni and get married but she is not interested in being tied down and dumps him at their graduation. He’s broken-hearted and follows her to a music festival – which is her idea of heaven and his idea of hell. He thinks he can win her back by pretending to be the sort of hip guy she wants to be with. But things don’t quite turn out as either of them expect.’ 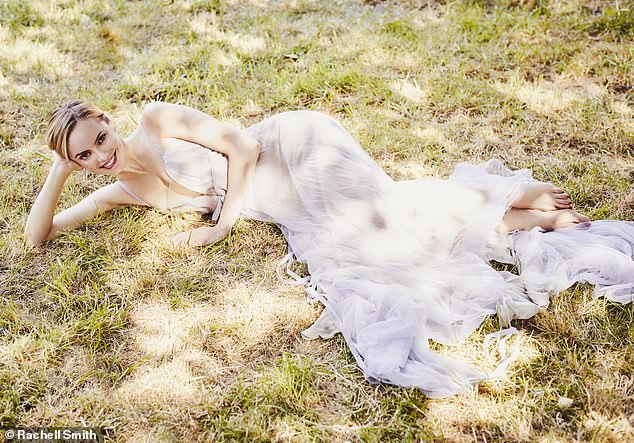 As Hannah speaks, you imagine that this striking young woman from Southend-on-Sea must have a lifetime’s experience of being too cool for school, not to mention hanging out with rock stars at festivals. But then she starts trying to answer questions about the two festivals (Leeds and Bestival) where parts of the movie – which also features Bake Off’s Noel Fielding and Hot Fuzz’s Nick Frost – were shot and that image starts to crumble. ‘Er, I wasn’t sure who any of the bands were when we were filming. All I remember is that it was very loud…’ 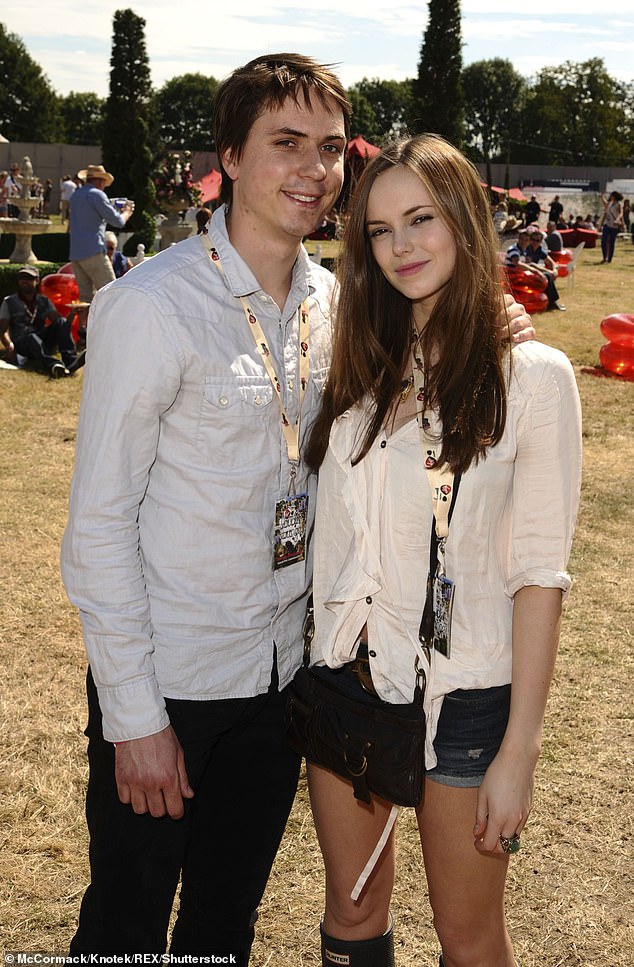 Hannah with fiancé Joe Thomas, who plays her boyfriend in new movie The Festival Hannah with Lizzy Connolly in The Festival

In the movie, her clothes are rock-chick hip, hair cut short and a dramatic white blonde. ‘Caitlin’s look was modelled on that famous female rock star with blonde hair,’ she says. ‘Her name completely escapes me.’ ‘Debbie Harry of Blondie?’ I say. ‘Yes. That’s her,’ she laughs. ‘I’m really showing myself up, aren’t I? I’m so uncool. The music I play is Julio Iglesias, Disney songs and the soundtrack to the movie Chef – largely Latin jazz. I’m so not a rock chick. Festivals are my idea of hell. I can’t think of anything worse than standing in mud or blazing heat and having to use really smelly toilets. The only festival I’d been to before was V. My friends had to pretty much kidnap me to go. It was very uncomfortable.’

I don’t even have social media. I have no idea what is on trend, I don’t care about hip parties

Hannah is a very different sort of girl to the types she endlessly portrays on screen. The youngest daughter of Essex accountant Ken and housewife Carol, ‘I was born with a cyst under my right eye,’ she says. ‘It was about the size of a button and stuck out from my face. My parents never made a big deal out of it and I didn’t get bullied at school, but it was always remarked on. I remember a girl saying, “We’d look alike if you didn’t have that thing on your face.” That has an effect on your character. I was very shy and felt safest and happiest at home with my family.

‘Kara and I were inseparable from the moment I was born – we still are. I only got into acting because when she was 11 [Kara is Hannah’s elder by four years] she wanted to go to the local acting group and I wanted to go because she was going.’ 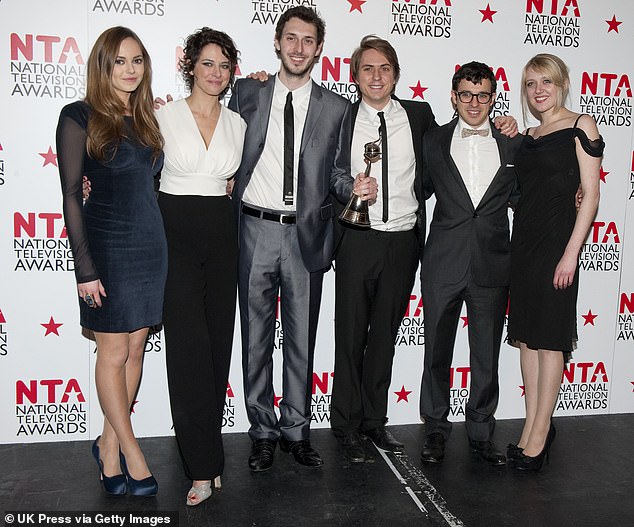 At the age of 12, two things happened that changed the course of Hannah’s life. Her GP advised her parents to have the cyst removed before it grew bigger (‘They were worried because it meant an operation under general anaesthetic, but we decided it would be for the best’). Then she was asked to audition for a part in the West End musical Whistle Down The Wind – and got it. ‘I pushed myself even though it was daunting. I loved performing. I had to sing, and the more I did it the easier it got.’

How did it feel after the operation? ‘I was pleased my cyst had gone, and it was obvious that people started to look at me differently. I was the same person underneath – you don’t change your personality because your face has changed. I was still shy and a little bit reserved.’ 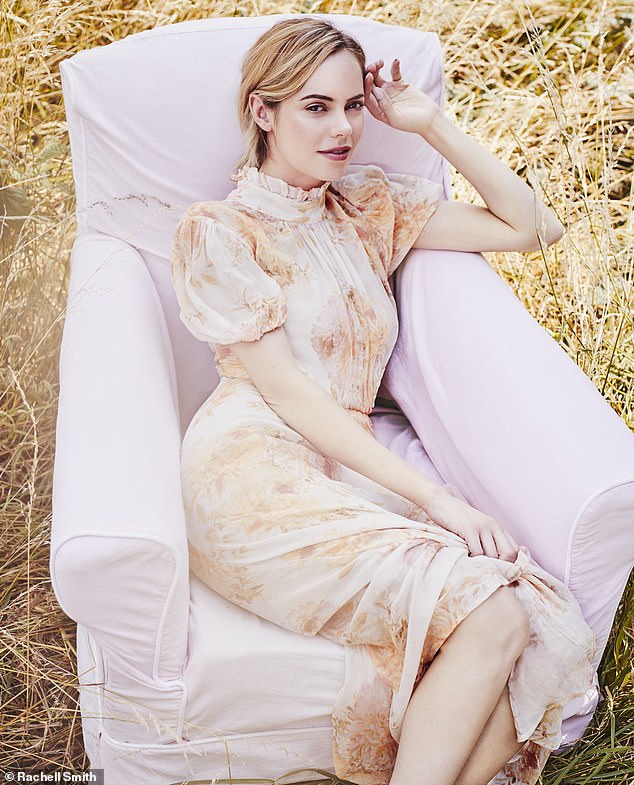 When she was 18 and studying for art A-level she was offered a part on the Channel 4 soap Hollyoaks. She moved to Liverpool and spent a year playing the younger sister of one of the show’s bad boys, Warren Fox (Jamie Lomas). ‘That year was like my university. I was thrown in with a crowd of really confident girls and guys who were so different from me, but I just had to get on with it.

‘I pushed myself out of my comfort zone but I was still the sensible one who had a tidy flat with milk in the fridge and no minidresses in my real wardrobe – as opposed to my Hollyoaks wardrobe. I would go to clubs, but at that point in the evening when everyone starts singing along to some big hit, I was just opening and shutting my mouth, hoping that no one would notice I didn’t know the words. I did have fun and I made some good friends, but I was really glad to get home.’ 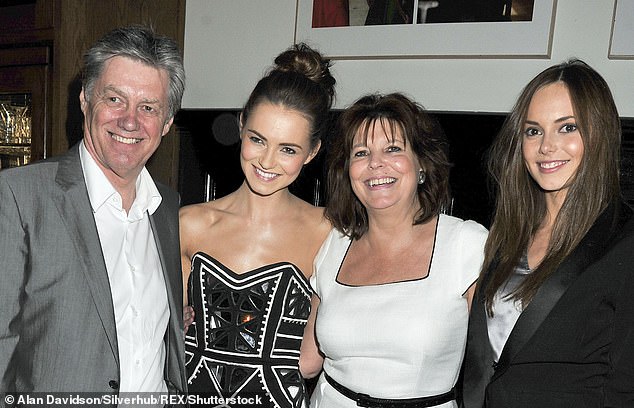 Hannah, far right, with her parents and sister Kara 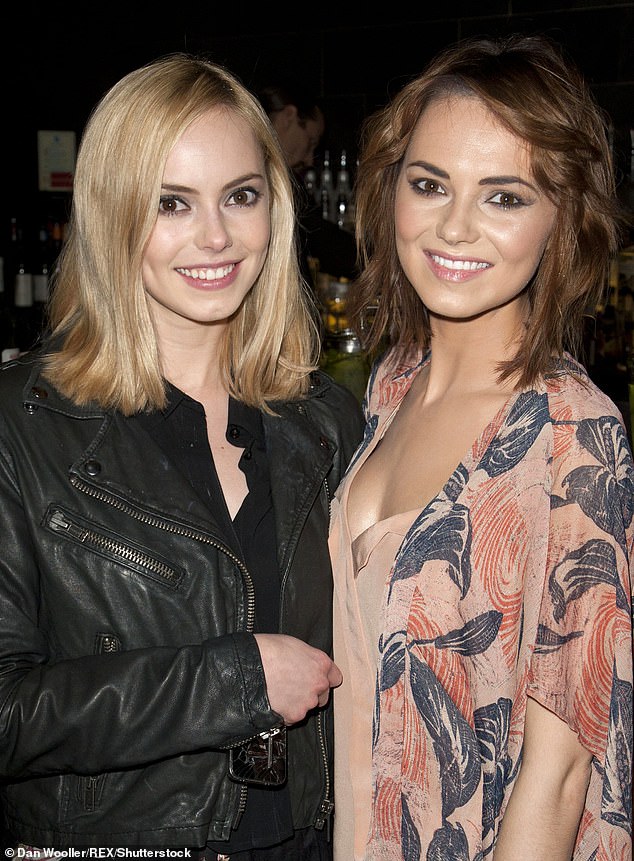 Hannah and her sister Kara

It was when she was cast as the love interest of grumpy teenager Simon Cooper (Joe) in The Inbetweeners that Hannah found her soulmates (and the love of her life) amid the super-clever, Cambridge-educated cast and writers who created the Bafta-winning series. Tara Brown (Hannah’s character) was a ‘hot girl’ but she was also as mad as a box of frogs, vomited at parties and her memorable ‘first proper romantic night’ with Simon turned into an unmitigated disaster due to his inability to perform.

‘The whole point about The Inbetweeners and The Festival is they are all about the uncool kids and the really awkward moments. When I first read the movie script I laughed out loud. It felt so much more real than anything else I’d been in,’ she says. ‘We live in this world where everyone is meant to be cool and look perfect on Instagram and always know what clothes to wear, what they should be listening to and what smart things to say. And not everyone is like that. I don’t even have social media. I have no idea what is on trend, I don’t care about hip parties. I’m never going to be someone who does. It is amusing because I often get cast as exactly the sort of girl who does.’ 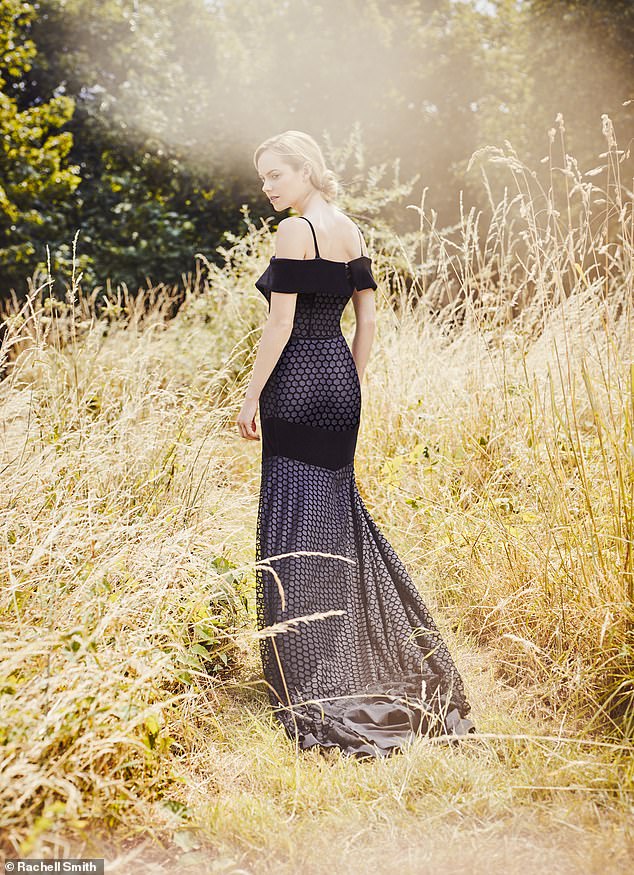 Eight years on from The Inbetweeners, she and Joe live in Central London. She wears a pale blue sapphire and diamond ring – she and Joe got engaged last year. Their romance had a suitably awkward start, with him offering to walk her to the tube station after filming finished one evening. ‘When he walked away he did this half turn and looked at me,’ she says. ‘I wasn’t exactly sure what he was doing. He told me later he was going for a “smouldering look” – which clearly passed me by.

What do you have for breakfast? I call it Mexican eggs, but it’s my own concoction of shakshuka with spicy black beans. Delicious.

Last book you read They All Love Jack by Bruce Robinson, who wrote Withnail & I. It’s his take on Jack the Ripper and it’s brilliant.

Secret to a happy relationship Communication.

Most treasured possession Home videos from when I was a little girl. There’s one of my mum telling me I can’t have sweets when I have a lolly stuck in my mouth, which makes me laugh every time I watch it.

Starstruck moment Meeting the Page Three girl Linda Lusardi, who was in a pantomime, when I was about five.

When you look in the mirror you see… A chin with a dimple.

Can’t leave home without… Running back in and making sure all the switches are turned off – my OCD kicks in.

Secret ambition To create a line of clothing that is comfortable and looks nice when you fly. I don’t like tracksuits.

Motto Don’t seek perfection. Be who you are.

‘We would talk to each other a lot on set. He also comes from Essex and is really family orientated – he has three younger brothers. He was totally fascinating and he would make me laugh and laugh. He knows about everything from astrophysics to football…but he wasn’t very good at picking up signs. Just before filming finished I told him I really liked him. We went on our first date and that was it.’

Joe has, she says, given her a lot of confidence. ‘I used to worry that I hadn’t been to drama school, which made me insecure, and was scared when I first walked on set, but I feel that less and less. Now I think, “I pushed myself; I worked.” I go to a dialect coach to work on accents and I work with acting coaches. I’ve also started to write, which I really enjoy. In my early 20s, I did feel like the girl who never fitted in. Now I don’t care. I’m comfortable being who I am – Joe is exactly the same.’

Just as Hannah is often cast as the girl all the guys want to date, Joe generally plays slightly obsessive, awkward guys. If she isn’t anything like that in real life, does it follow that Joe himself is a super-cool hipster? ‘Well, he’s super-cool to me but he’s not a hipster. He doesn’t go to festivals either. He’s massively into classical music. He’s always reading or writing and both of us spend a lot of time together with our families. He and Kara get on brilliantly.’

She hopes their future will include more comedy, children (‘maybe in a few years’ time’) and a life shared with family and friends. Unlike her sister Kara, who won Strictly in 2010, she has no yearning to do a reality show. ‘God no,’ she says. ‘I would be absolutely awful. I can act that girl but I can never be like that. Even the idea makes me break out in a sweat. I’m far happier cheering from the sidelines.’

The Festival will be in cinemas from Tuesday