My dad was hovering nervously in the hallway when I came home from school. A familiar knot of tension tightened in my stomach. What was wrong this time? Before I’d so much as removed my coat, he said: ‘Lady has been put down. But don’t cry, you mustn’t upset your mother.’

Lady was my six-year-old Cavalier King Charles Spaniel. She’d been sitting on my bed quite happily that morning. I’d noticed she had a bit of a weepy eye but … put down?

I couldn’t believe it. I ran around the house, screaming her name. Dad trailed after me, desperately trying to quieten me.

Mum was nowhere to be seen. My parents had taken Lady to the vet to do the deed — and then Mum had retired to her bedroom.

Clare Whitfield (pictured), who lives in Southampton, revealed how her mother’s death forced her to deal with her toxic childhood

I was 13, so why hadn’t they warned me? Why hadn’t I been given the chance to say goodbye? And how could they expect me not to cry?

The tears came regardless. My three older siblings were upset too, but she was my dog, my closest friend in an often hostile house.

When Mum appeared later that evening, she aimed her venom at me: ‘You never did anything for that dog. I loved her more than you did.’

Of all my mother’s crimes against me, a catalogue of rejection stretching back almost to my birth, this one stings the most — even now.

My mum, Brenda, was a complex character. She married my father, Gavin Riley, aged 20 and had my three siblings in close succession: my two sisters and brother were 11, seven and nine years older than me. They all now agree I was the straw that broke the camel’s back.

On more than one occasion Mum told me I’d ruined her life. Just as she’d got things back on track after having three children, I turned up.

One of my earliest memories is of clambering over her wanting a cuddle — only for her to push me, saying: ‘Get off! Leave me alone — you’re your father’s one. He can have you.’

In one photo, at a picnic, I’m a toddler holding a knife as my mother looks on, seemingly unconcerned. Now, as the mother of a 16-year-old daughter, I can’t see how anyone could be so cold towards a baby.

Ultimately, I think her behaviour stemmed from a desperate need to be the centre of attention. Nothing could threaten that; not a baby, not her child’s dog. 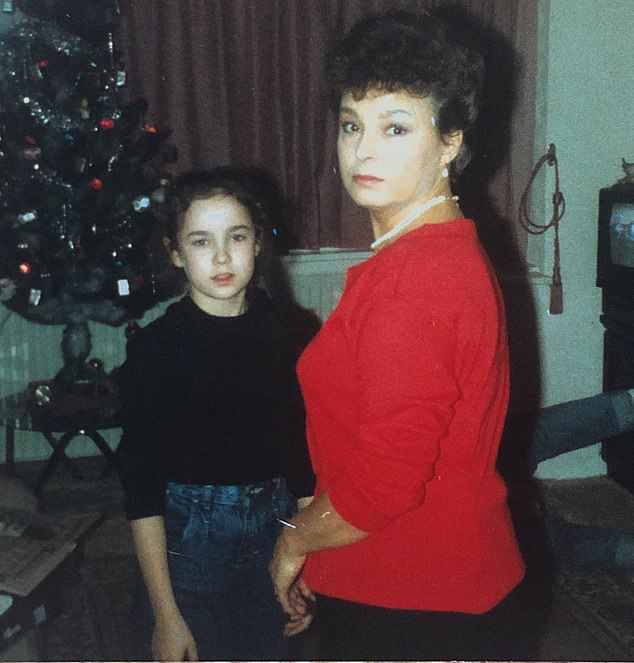 Clare said she hadn’t anticipated a fight, while playing the dutiful daughter when her mother (pictured) was admitted to hospital with stage four lung cancer

She was the star of the film and her children were nameless bit parts; insentient possessions rather than humans. If we dared to bring friends home, she would commandeer their attention — she could be charismatic — or provoke humiliating rows with my dad in front of them.

My mother was also prone to changing her story, so I’ll never know why my dog’s life was cut short. I have to assume the vet had good reason, that it wasn’t Mum’s request.

Years later, she denied having shouted at me that day. It was only the fact my nearest sister corroborated my version of events that stopped me from going mad.

In short, my mother was a narcissist whose constant attacks nearly destroyed me. So when she died, in January 2016, you might assume I felt some sort of relief. Instead, it was the trigger for a slow collapse — one that forced me to deal with the toxic legacy of my childhood.

When Dad died, it didn’t even cross my mind that I could grieve. It was all about Mum

Mum was 69 when she was admitted to hospital with stage four lung cancer, dying a month later. I played the dutiful daughter, making the three-hour journey from my home in Southampton to Ashford, Kent, to visit her several times a week.

By then, I was happily married to my kind, supportive husband Duncan, with an adored 12-year-old daughter, Caitlin, from a previous relationship. I had a good job as a buying manager, and told myself I had beaten my childhood demons.

Seeing mum in her hospital bed, wearing an oxygen mask, I was stunned by how someone I’d always found so frightening could seem so vulnerable. But she still had a bite. 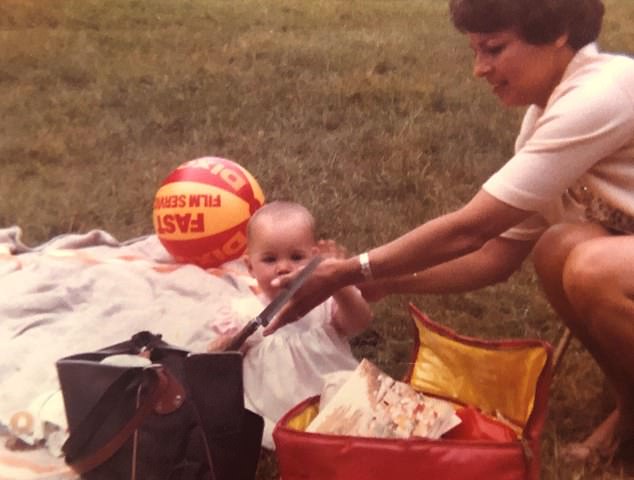 Clare, didn’t shed a tear when her mother died and claims the numbness of shock got her through the funeral. Pictured: Clare as a child with the mum

I didn’t expect a deathbed apology, but I hadn’t anticipated a fight.

On one occasion, I had been sitting with her for ten minutes — having driven all that way — when she dragged the oxygen mask from her face. ‘You can go,’ she said. Another time she attacked me for having given up piano lessons against her wishes: ‘I bet you regret that!’

Through it all, I stayed numb, as I had through years of intermittent contact and cruelty. Then 37 years old, I’d taught myself to live with the way Mum would cut me off for long periods without warning.

Near the end, there was only one sign that, perhaps, she felt something close to affection. She was excited at the thought of paying for me to have a new kitchen after she died. Looking back, scouring my memory, I really believe this was the closest she ever came to showing she cared about me.

When she died, we were all there. But as my siblings sobbed, I didn’t shed a tear. The numbness of shock got me through the funeral. It was a month before I felt anything.

First came freedom — she could never criticise me again. Then, an anger rose as I realised I’d never get any explanation for her behaviour.

Dark memories came into view, then I was deluged with decades’ worth of rage and frustration. Why had she treated me like that? Had she ever loved me? Freed from her influence, I started to fall apart. 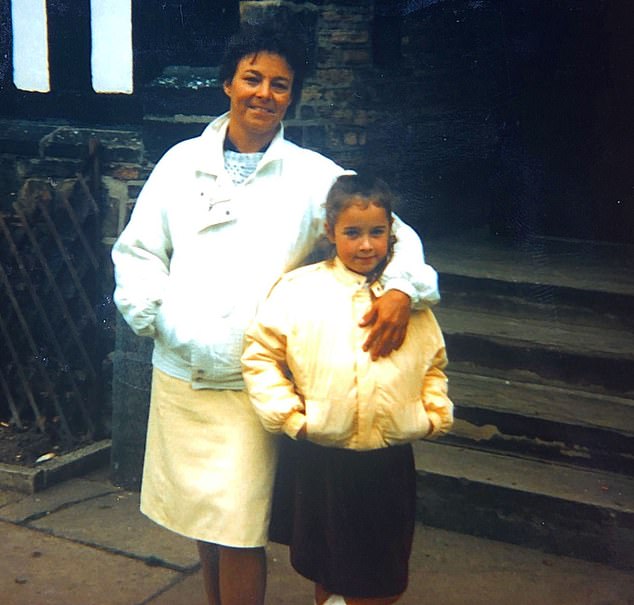 Clare said as a child, it was only when she started visiting friends and seeing their relationships with their parents that she realised her mother (pictured) wasn’t well

I became erratic and overcome with emotion. I felt unable to cope with the pressures of work and being a mother. I was also struggling with an undiagnosed health problem: Hashimoto’s thyroiditis, an autoimmune condition that affects the thyroid. I withdrew from friends, and drank each evening in a vain effort to relax.

I’d become a woman incapable of saying no, a hangover from never doing anything right in my mother’s eyes. Then, when things went wrong, I hated myself for failing.

So, as I wrestled with my feelings, I also lambasted myself for the way my relationship with my husband suffered. I lost count of how many times my daughter saw me cry.

I had internalised my mother’s hatred so completely that I heard her in my head. My inner critic was constantly standing over me, saying I’d never be good enough, that I was too fat, thin, or cowardly.

My mother thought pride was disgusting and confidence was another word for arrogance. Perhaps it’s no wonder I grew up incapable of feeling either emotion.

But it was only after her death that I realised how she had loomed large over me. When I was a child, she seemed glamorous and I wanted her attention. She’d do exciting things spontaneously, such as buy me a puppy when she went out to get curtains. She was attractive, and people were drawn to her.

It was only when I started visiting friends and seeing their relationships with their parents that I realised Mum wasn’t well. 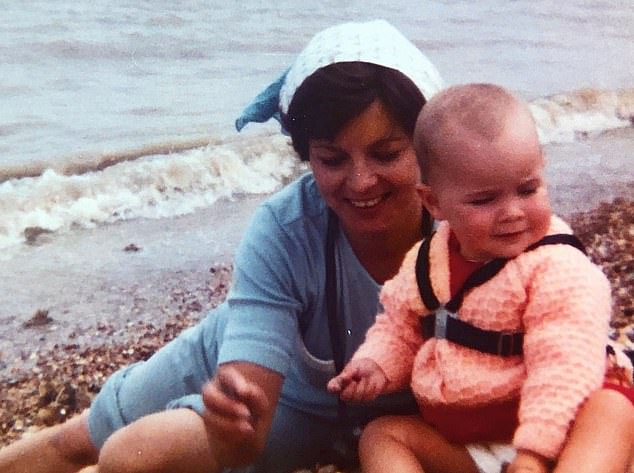 Clare said her mother (pictured) would mock her for crying and hit her if she showed anger, so the best approach was to go dead inside and stare blankly

Our father had left the Navy the year before I was born to work in the City, leaving my mother as a homemaker in our four-bedroom house in Morden, London. Looking back, she was clearly unhappy.

Dad, meanwhile, would do anything for a quiet life. How Mum would sneer if I ran to him: ‘Oh he’ll never do anything — all he wants is dinner on the table.’

She used to chide me for looking like him. She never overtly said I was ugly, but I felt it was implied.If she detected any dissent, she would slap me. I used to think, ‘One day I’m going to hit you back.’ Of course, I never even tried.

If I cried, she mocked me. If I showed anger, she hit me again. The best approach was to go dead inside and stare ahead blankly.

The only chink of light was that Mum encouraged my education, and I was the first in my family to go to university. She wanted at least one of her children to get a degree.

At Middlesex University, however, I felt lost. Used to being dominated, I found myself melting into the background, enduring relationships with men who treated me badly, just as my mother had.

When I told them about her, some used the information to attack me, saying I was ‘crazy like my mother’.

I got a job as a copywriter, and there I met my daughter’s father. He was kind to me, and we’d been together for two years when I became pregnant.

But three years later, our relationship came to an end. As a single parent, there was no chance of support from my family. 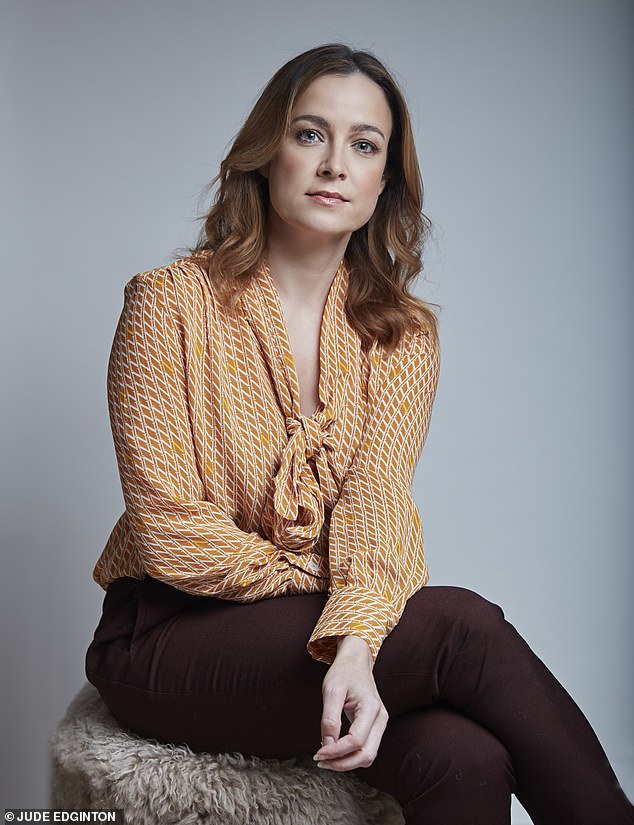 My life took a turn for the better when I met my now husband in 2007. Duncan is a fun, gregarious man and we built a life together that didn’t include my mother.

In fact, he had only met my parents twice when Dad was diagnosed with a brain tumour in 2011. Suddenly it felt petty to hold grudges and we resumed contact.

As always, I slipped into an acquiescent role, erasing my true feelings. I was so worried about Dad going to his grave in the midst of a blow-up between my mother and I that I kept the peace at all costs. The last thing he needed, I told myself, was for me to make a scene (after all, that was my mother’s role).

When Dad died six months later, aged 66, it didn’t cross my mind that I had a right to grieve. It was all about Mum. Again, I pushed my feelings down.

Perhaps that’s why my anger and misery came bursting out when my mother died. Luckily, after months of misery, I sought help.

First I was diagnosed with Hashimoto’s, and started taking medication as well as overhauling my diet. These changes gave me the energy to tackle the real problem by going to therapy.

Slowly I realised that now my mother was gone, I could be free. It was terrifying, but I needed to let my instincts come through without fear of someone telling me off.

Now, I make friends with people who give back, rather than those who find me useful, which is a more familiar feeling. Little by little, my stifled sense of self is beginning to blossom.

Oh, and mum never did get to pay for my kitchen. I used the money she left me to pay for a creative writing course, which led to my debut novel. It’s my way of finally regaining control.

People Of Abandoned Character by Clare Whitfield (8.99, Head of Zeus) is out now in paperback.