My sister is asking everyone to pay £20 for Christmas dinner

A woman has been left in disbelief after receiving her sister’s invite for Christmas Day dinner – alongside a request of £20 towards the meal.

Taking to the British parenting forum Mumsnet to explain the situation, a woman said that her colleague has been left stumped by the request and doesn’t know how to respond.

‘I can’t imagine charging a guest, especially family,’ the woman wrote. ‘I’d even go so far as telling them to just bring themselves if they asked if I wanted anything bringing.’

The response was mixed, with some saying they considered asking family for money ‘crass’, while others felt it was ‘actually quite fair’, given the cost of living crisis.

The thread’s author, who usually cooks on Christmas Day but goes to their family every third year, admitted they aren’t sure they’d attend if asked to bring cash.

She added: ‘Is this a common thing to charge family for dinner? I save through the year for Christmas gifts and food but am I the exception? Would you/do you charge and/or pay family?’

‘Twenty pounds really isn’t that much for Christmas dinner,’ one commenter wrote. ‘And given the rising costs of everything, I personally don’t think it’s unreasonable.

‘I go to my parents every year and we always plan out our shipping list in advance and divide and conquer.’ 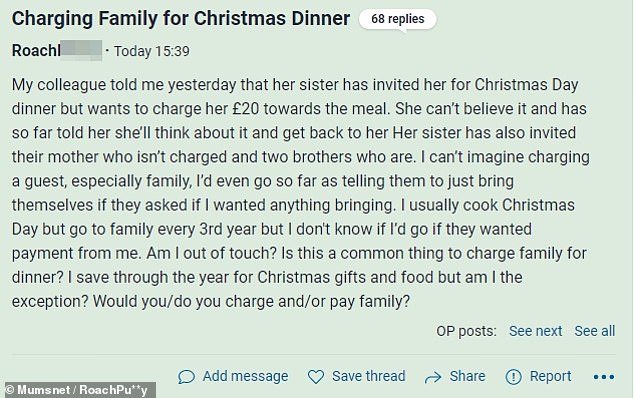 Their mother wasn’t asked for the money, but her other siblings were – in a depressing glimpse at the cost-of-living’s effects on the festive period

The response was mixed, as while some considered asking family for money ‘crass’, others felt it was ‘actually quite fair’

Some people said it’s totally fair to ask for cash, while others said that everyone bringing different dishes as a contribution is a better way of doing it

Another chipped in: ‘I wouldn’t think of it as being charged for Christmas dinner, more just throwing some cash into the pot to make the cost less eye watering.’

A third user admitted it’s ‘odd’ to ask for cash, revealing that their family simply splits the responsibility via dishes.

‘We usually take all the desserts,’ they explained. ‘And someone else brings some drinks etc so the cost is sort of shared out.’

One also added: ‘Charging is grim, asking for specific food and drink contributions is fine.’

Some pointed out that the request itself is very reasonable, but all depends on how it was framed and the tone used.

Elsewhere, a commenter wrote: ‘Never in a million years would I charge any guests for a meal at my house. If I couldn’t afford to host, I wouldn’t do it. Nobody has ever charged me either. People usually bring something as a token of appreciation or send on afterwards.

‘At Christmas most people buy more food than they can eat within a couple of days so if they share it, it helps.’

It comes as a fifth of families in the UK say they are going to ask their guests to pay towards their Christmas dinners.

New research from the household finances firm Nous suggests over half of those surveyed were worried about how they would afford to pay for things over the festive period.

And 36% said they would reduce spending on Christmas food and 34% will lessen how much cash goes on Yuletide drinks.

Combined with the soaring costs of Turkey amid a feared shortage of the birds this December, it could make for stressful meal around the dinner table.