My snakes are so charming – I could cuddle them all day! Man wraps himself in Burmese Pythons

My snakes are so charming – I could cuddle them all day! Man wraps himself in Burmese Pythons

This reveler gets a little tied up at celebrations in Manila to mark the coming of the Chinese Year of the Snake.

The man is pictured dangerously cavorting with pythons, including the renowned Albino Burmese Python.

These constrictors are recognised by their iconic patterned skin, and are a native species in the grassy marshes throughout Southeast Asia.

Knot fun: Filipino reveler flirts with danger as he plays with Burmese Pythons 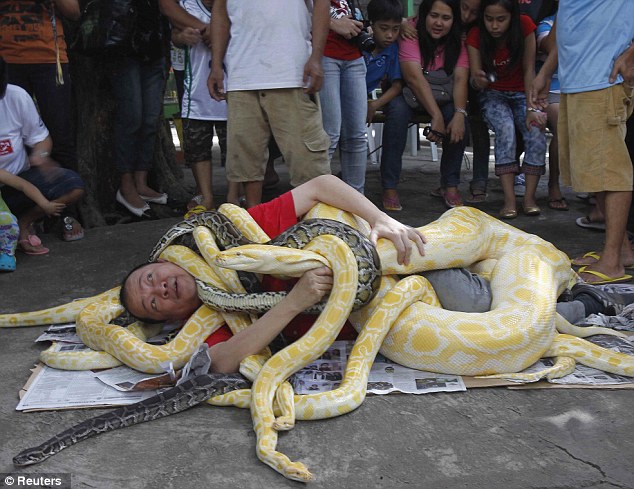 Tight spot: The Burmese Pythons are known to grow as long 23 feet and grow girths as large as telephone poles

Burmese pythons are among the largest snakes on Earth, and have been known to reach 23 feet or more in length. They can weigh up to 200 pounds with a girths the size of telephone poles.

The snakes start their lives mainly as the inhabitants of trees. As they grow into fully fledged adults, however, they become ground-dwellers. They are naturally excellent swimmers, sometimes able to stay under water for as long at 30 minutes.

Burmese constrictors feed largely on small mammals and birds. With poor eyesight, they rely on chemical receptors in their tongues and heat sensors in their jaws in order to track their prey.

They catch the prey with their teeth, wrapping their bodies around the victim in a deadly squeeze until suffocation.