‘My tattoo? It’s two fingers up to age’

Who says tattoos are just for rebellious kids? The women here have bucked the trend with designs that mark the ups and downs of a life lived in full. They explain the significance of their inkings

My tattoo, on the inside of my right arm, is of two feathers tied together with huayruro seeds – from a tree that grows in the Amazon and represents good fortune and protection in Peruvian culture.

I had it done when I was 35 after my focus had turned towards my wellbeing in my early 30s. I realised I was carrying suppressed emotional pain and sadness from my childhood and 20s; I felt numb, disconnected and insecure. When I discovered shamanic healing practices life grew brighter and began to improve.

I made extended trips to South America, staying with shamans [spiritual healers] and indigenous tribes in the Peruvian, Brazilian and Colombian Amazon. I was freelancing so I had the freedom to go away then return to work between trips.

The main feather in my tattoo is from a macaw. In shamanism feathers are an important tool used to energetically cleanse people, spaces and objects. The smaller feather is a magpie’s as I’ve been drawn to them since I was a child. Both birds are about communication and being brave and bold – generally I can be quiet, so for me they symbolise stepping out of my comfort zone.

The feathers represent my healing journey through shamanism. It hasn’t been an easy path but I’m grateful to have a better sense of who I am now and to enjoy my life more fully, so it’s been worth it.

I had mixed feedback from my family about my tattoo, but I always receive positive comments from friends and even strangers. It didn’t hurt even though it’s on a sensitive part of my arm and took about two hours. I’m open to getting another tattoo at some point but, until I feel moved to by a profound experience or event, I’m happy as I am. 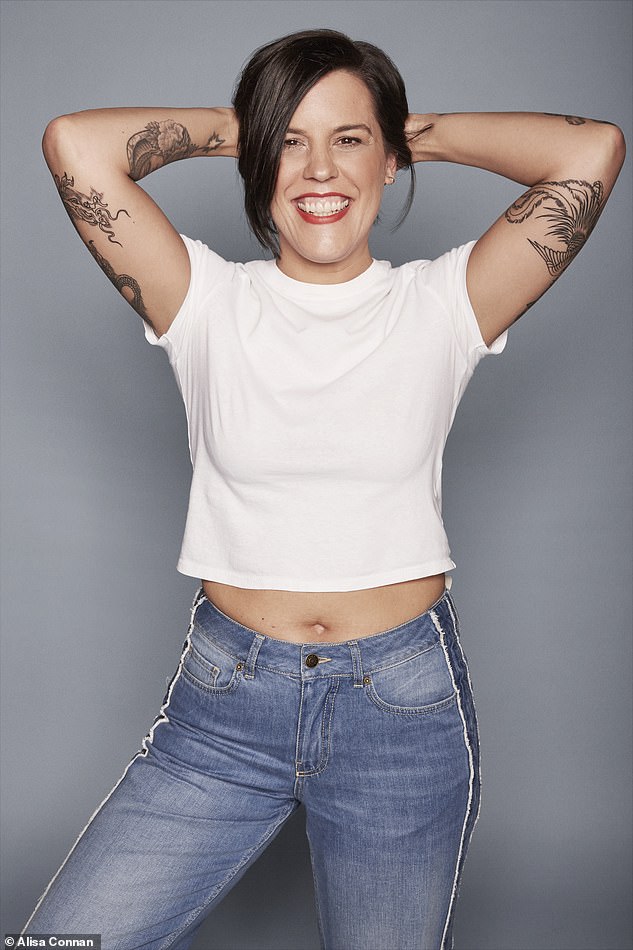 I had a Buddha tattoo on my right forearm when I was 35 as I’d been meditating for five years and it had changed my life. I’m a different person now; I almost never get angry.

There are also three peonies that sit underneath the Buddha, representing my mum, my dad and my brother Elliot; the idea was that the Buddha was watching over us. We have always been a close family and I was heartbroken when Elliot [who had type 1 diabetes] passed away suddenly in January, aged 41. He was my best friend and we spoke every day.

I wanted to have tattoos in memory of him, but they are also about me and what I learned from him. The phoenix, on my left upper arm, and the dragon, which I got last September on the right, symbolise the yin and yang of life. The lesson I learned from losing Elliot was that you have to take the rough with the smooth; you can’t appreciate the good without accepting the bad.

I had the tiger on my left forearm done just before I moved to New York three years ago. It was my dream to live there, but it also felt like a big, bold move going on my own. The tiger symbolises the strength that enabled me to make my dream come true.

Each one of my tattoos marks an experience that I’ve learnt and grown from. That takes time, which is why I haven’t rushed into them. I didn’t want just pretty tattoos so having them done has never been something I’ve taken lightly.

I have had nothing but positive feedback about my tattoos and I think that is to do with the artistry and detail that have gone into them.

My parents appreciate my reasons for having them – my mum had one done too, at the age of 65, after Elliot died. My next tattoo will be one that he was booked in to have at the time of his death. He was a big skateboarder, so that’s the theme. 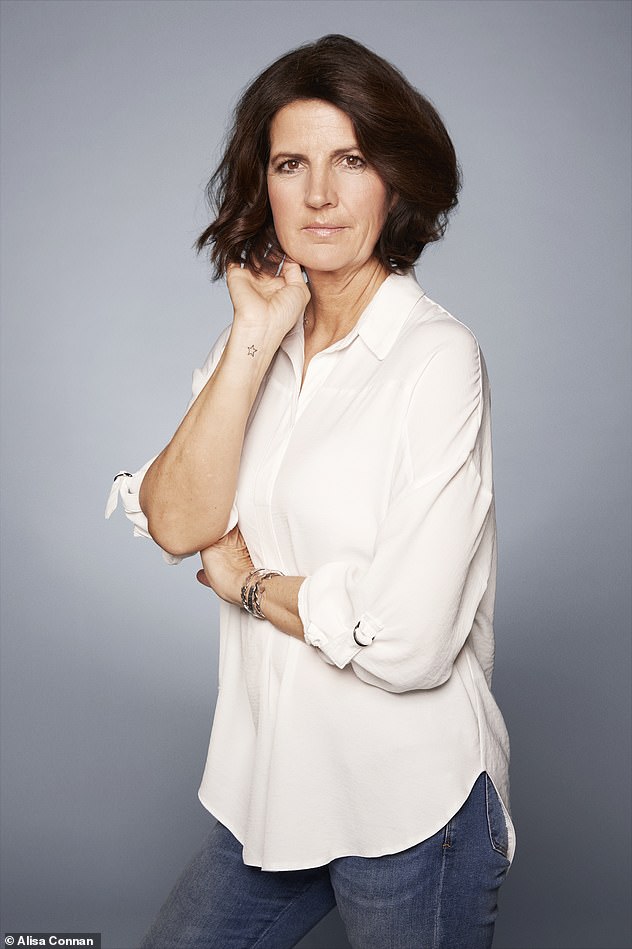 Two years ago my mum was diagnosed with lung cancer and I felt as though my world had been turned upside down. I thought, ‘Sod it. Go on and do the things you want to do because who knows what’s around the corner.’

I wanted a tattoo that reflected my family and also my mum. A star came to mind because it’s twinkling up in the sky and the five points represent my five children.

It’s small, as I wanted something quite discreet that I could cover up if need be, but there’s a lot of emotion in it.

The five points also represent my five decades as I had it done when I turned 50. There’s something about a tattoo that is two fingers up to age and something liberating about doing it later in life. When you’re younger, people always say, ‘Don’t! You might regret it.’ But by the time you’re 50 you know yourself pretty well and I’m excited by the permanence of it.

I didn’t tell my husband for a few days. Then, when I slid my arm across the table, he said, ‘Really?’ but now he quite likes it – though he doesn’t want me to start a collection.

Having said that, they’re very addictive. I might get another one to represent cancer – such as the breast cancer awareness pink ribbon in support of my mum and a friend who is also battling the disease. 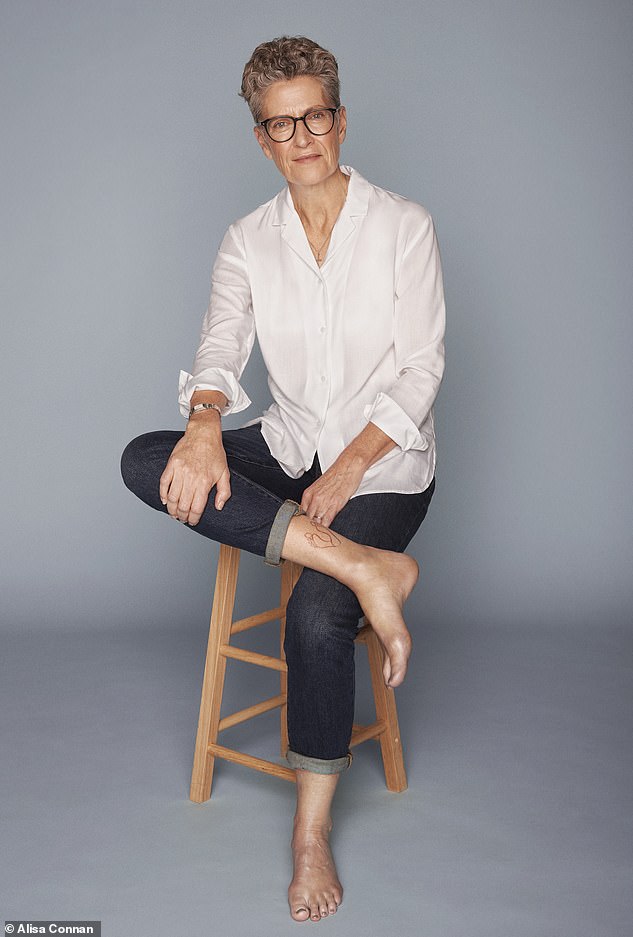 ‘It shows how I overcame depression’ says Susan Kennedy, 57, works for an office service company

I got a tattoo of feet above my right ankle on my 50th birthday after some friends persuaded me. It felt like a way to not just be run of the mill but, mainly, it was about wanting to mark my commitment to running.

The feet are very symbolic for me because running has always been a huge part of my life. I had postnatal depression after having my second son, so I started running again following a long break and that’s what got me over it. I am convinced it’s also the only thing that gets me from Christmas to April without going insane (I suffer from seasonal affective disorder).

I’ve completed 16 marathons and my running club has made me a mental health champion, as part of the England Athletics #runandtalk initiative, to promote mental wellbeing through running.

I always fancied the idea of a tattoo but I probably still wouldn’t have had the courage to get one if they hadn’t become more popular. I also think as women get older we become more independent and liberated – we move beyond being the wife or mother.

My husband [actor Gordon] was a bit surprised, but not bothered by it. My younger son, who is 24, probably thought I was a bit mental but the older one, who is 25, thought, ‘Marvellous. Now I can get one too.’

I can see how tattoos might become addictive but I think it’s something that looks nicer when you stick to one. 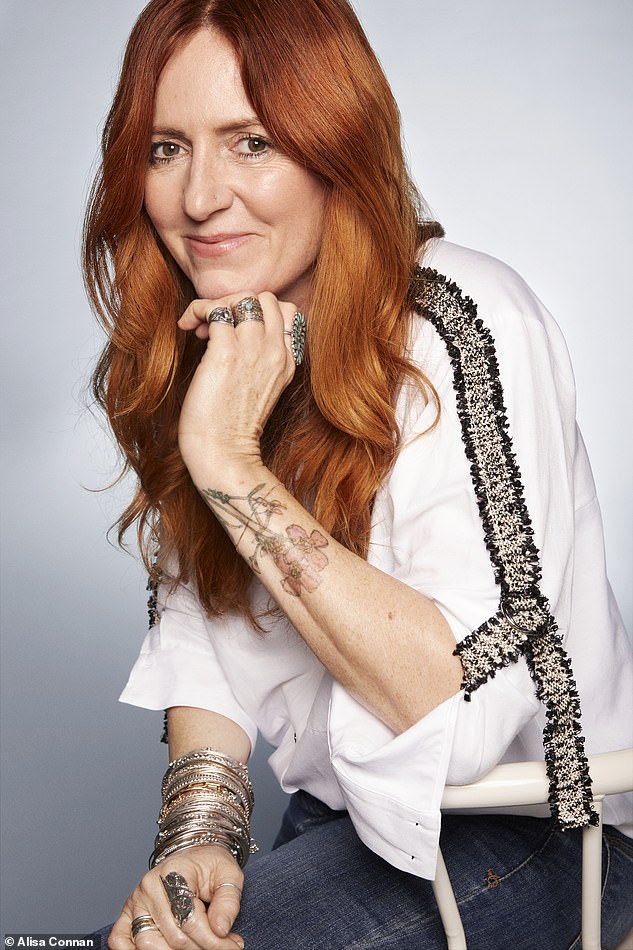 I had my first, a dragonfly on my back, when I was 35 after working with a model who had incredibly arty tattoos. It was at a time when things had changed dramatically for me and I had split from my husband.

A dragonfly was the perfect symbol of having left my marriage and getting my wings as an independent woman, plus I’m a bit of a hippie.

As I got older, I wanted ones that I could see, so I had another at 39, and have had them regularly ever since. My last one was this summer.

Of my six tattoos the anemone on my left wrist is my favourite – it’s inspired by a watercolour by [artist] Charles Rennie Mackintosh and a print in my house that I adore. I spent time with the tattooist making it work for my arm and was irritatingly pedantic about the colours and how sketchy the lines were. It makes me happy every time I look at it and it pays homage to my love of nature. I also have my horse’s name, Prophet, on my arm. I bought him after the disappointment of being unable to have children and he’s lifted me through the bad times. My cats did too – so I had their names done a year after they died.

Until I saw that model, it had never occurred to me to get tattoos. I always thought of them as ugly and heavy, with chunky lines in red and black, but hers were fine-lined and delicate, with subtle colours. I felt it was the right time, being old enough to take a step back and know what I wanted.

I never thought my parents would understand my tattoos, but they were surprised by how beautiful mine are and I was amazed when my mother said, ‘I’ve always fancied one of those.’ People comment on the floral ones – it gives them a different opinion of tattoos.

The tattoos I have are special to me. I’ve never regretted any of them – they’re a part of me now.