‘We’ve still been growing, but it’s been turbulent,’ says co-founder of eco-tech firm Myenergi Jordan Brompton, assessing how one of Britain’s fastest-growing businesses has fared in 2022.

Brompton’s co-founder and CEO Lee Sutton agrees: ‘Demand is stronger than ever, especially since [the war] in Ukraine – we’ve now got lots more people thinking about energy security.’

Founded in 2016 by former electrical engineer Sutton and marketing specialist Brompton, Myenergi initially came to market with a solar power diverter, ‘eddi’, which allows energy generated from solar and micro turbines to be retained rather than exported back to the grid.

It soon followed up with what has now become the best-selling British-made domestic electric vehicle (EV) charger, zappi, as well as a suite of other products deigned to create an ‘ecosystem’ whereby homeowners can use and store energy more efficiently while minimising their bills.

When it comes to zappi, for example, the group claims that even with electricity prices high, petrol prices would need to fall to just £1 a litre to match the cost of running an EV charged at home, with the average cost for fully charging an EV just £20 – or 10p per mile driven.

Six years later, with the help of a £1.2million investment from former Tesco boss Sir Terry Leahy and Bill Currie, Myenergi has grown from a staff of six to employing 350 workers and is one of a handful of profitable eco-tech firms operating in the UK. 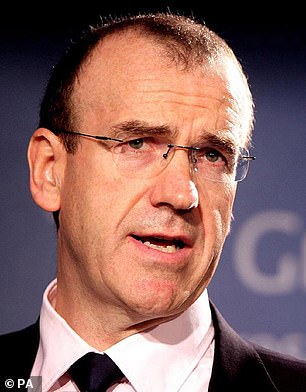 And, while 2022 has meant Myenergi tackling problems familiar to businesses across the country, trade has boomed as Britons face up to ever higher energy bills.

The group is forecasting a bumper 218 per cent year-on-year increase in revenues to £53million for 2022, and is now in the process of building a 65,000 sq ft manufacturing facility in Lincolnshire.

Chief marketing officer Brompton says: ‘We now operate in multiple markets – Belgium, Australia, Ireland – and we have a big market share in the UK.

‘We’ve now shipped and manufactured over 400,000 products, and [the new factory] will enable us to keep up with the growing demand our business has seen.’

Neither co-founder hides their surprise at the pace of Myenergi’s growth.

Sutton says: ‘When we started, we wanted to build products that really make a difference, with the ambition of contributing to the future of energy and delivering flexible loads for the grid with residential properties.

‘It’s a big dream of mine, but I wasn’t really thinking that we would get in that position in this sort of timeframe.’ 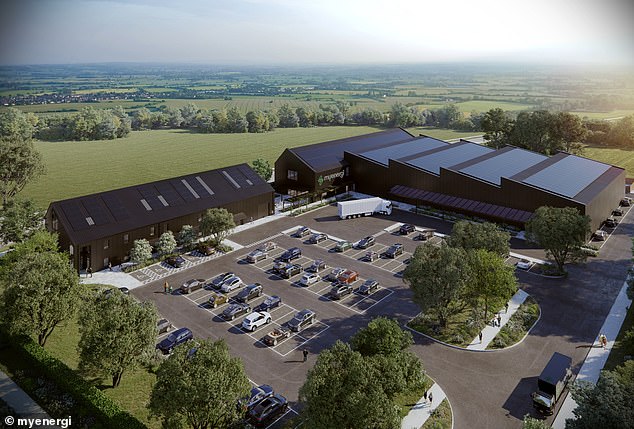 The design for Myenergi’s 65,000 sq ft manufacturing facility in Lincolnshire. 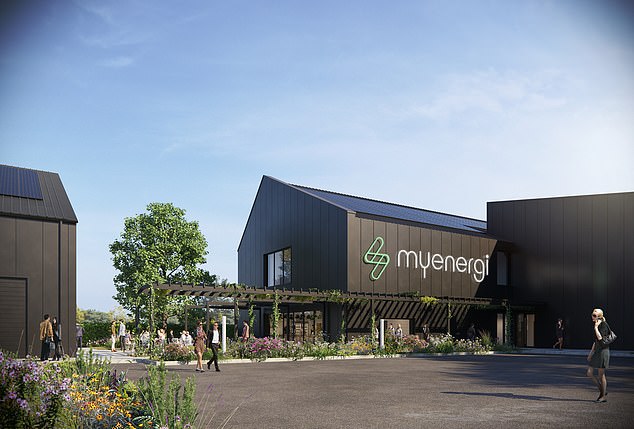 But how to account for this pace of growth?

Brompton says that Myenergie has been first to market on a number of products but, she accepts, energy efficiency-driven eco-tech ‘is a fast growing market anyway’.

She explains: ‘There are other macro factors, obviously – The drive to net zero, the [2030] ban on diesel and petrol cars, for example.

‘The energy crisis has now played into that in terms of people wanting more energy independence.

‘We’ve seen the solar market just go through the roof, essentially. We’ve worked in the renewable industry for a long time, and [solar demand] is at least on par with when it was subsidised.

‘People want to be that little bit more independent, have self-control and more autonomy.’ 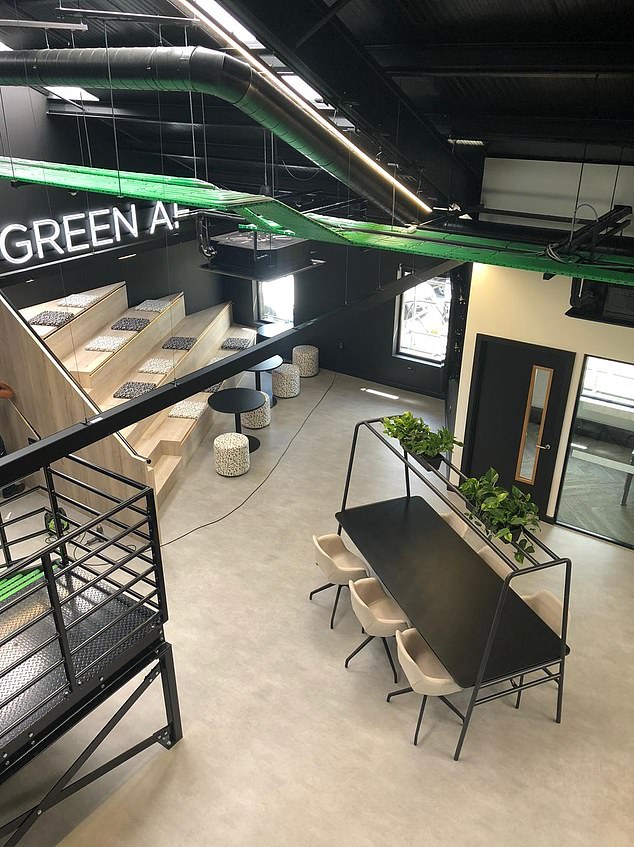 The group says demand is now so strong for solar, it is doing roughly double the number of installations as this time last year – around 4,000 a month.

Sutton adds: ‘I think what set us apart from competitors is our understanding of our consumer. Those buying an EV are likely to be considering solar and vice versa – the same follows with electric storage and battery storage in the home.

‘We’re focused on creating that ecosystem of technology that works as one system, which you just can’t really get when you’re buying individual products from different vendors.’

Myenergi’s success has proven to be a boon for Sutton and Brompton’s hometown of Grimsby, providing the area with employment and a much-needed economic boost.

Brompton says: ‘I think it’s quite rare what we’ve done. We’ve kept the business in the UK and it’s something that we’re really proud of, especially being from Grimsby, because there wasn’t a lot of opportunity growing up in this area.

‘To be able to offer this much employment to a previously deprived area, somewhere that was predominantly known for fishing is now like a tech hub – they’re calling it the “energy estuary”!’ 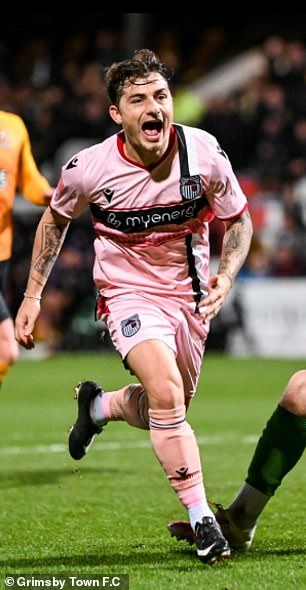 Myenergi is the sponsor of Grimsby Town FC

The group has been active in building its brand and presence in the local community, and is working with local schools and colleges to train potential employees of the future.

Myenergi now even backs its local football club, Grimsby Town FC, with the Mariners switching its main kit sponsor from Young’s Seafood at the beginning of this season.

Brompton says: ‘We’ve made an effort to get into the hearts and minds of the local area to show them that there is an opportunity in a very fast-growing green market space.

‘We’re seeing some real careers come out of it and the knock-on effect of that is huge. There’s a real buzz in this part of the country – we’ve got [Danish energy group] Orsted on the riverbank too.

‘We personally get a lot of messages from companies all over the North as well, inspired by what we’re doing and thinking about cheaper, more local business, which can only benefit us all.’

But how can this eco success be replicated in other areas of the country in need of revitalisation?

For both founders, part of the answer is in stability and continuity, having suffered much ‘chopping and changing’ in government policy in recent years.

We get a lot of messages from companies all over the North as well, inspired by what we’re doing and thinking about cheaper, more local business, which can only benefit us all.

‘In 2015 when they just totally slashed the PV Feed in Tariff rate to virtually zero, about 50 per cent of installers went out of business,’ Sutton explains, adding that Britain consequently faces a shortage of the tradespeople it will need for the energy transition.

‘Just like with EVs, if you want a solar system installed, you’re looking at a long time to get it because demand is so high. We need more installers, so anything the government can do to encourage people to enter the industry and become installers is welcome.’

Brompton adds: ‘We need to upskill as a nation to be able to decarbonise. We need to look at the education system.’

The pair believe decarbonisation and the energy transition are both a necessity and a foregone conclusion, leaving Myenergi with the potential to continue its growth trajectory in the years ahead.

‘There’s huge demand for renewable energies and huge demand for EVs, and we feel like we’ve got a real responsibility now to make sure that we play our part in that and to do it as sustainably as possible,’ Brompton says.

‘Every market wants to decarbonise and that is an opportunity [for Myenergi] for international expansion and reaching into other markets.’ 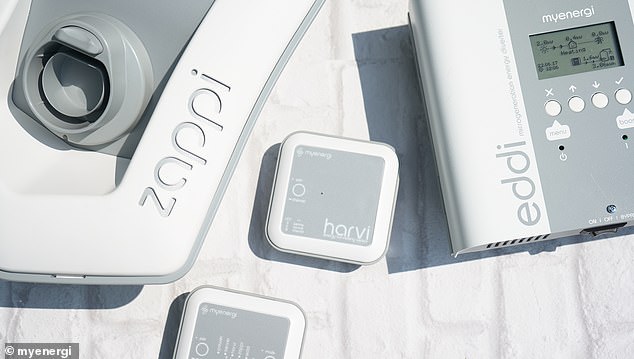 A collection of the firm’s various domestic energy products