She’s been indulging in a sun-soaked trip in Croatia.

And Myleene Klass didn’t take long to work on her tan as she hit the deck of a luxury boat for some sunshine on Tuesday – sharing a sultry selfie from on-board.

The songstress, 40, put her eye-popping cleavage on full display as she posed in a striking yellow bikini top while throwing a coquettish smile at the camera.

Myleene drew attention to her washboard abs with a glittering body chain, leading down to her pastel blue bikini bottoms.

The former Hear’Say singer ditched all make-up for a fresh-faced glow, and shielded her eyes from the sunshine in black tinted shades.

Myleene’s sea-dampened locks fell past her shoulders, while sweet name plate necklaces added some extra shimmer to her ensemble. 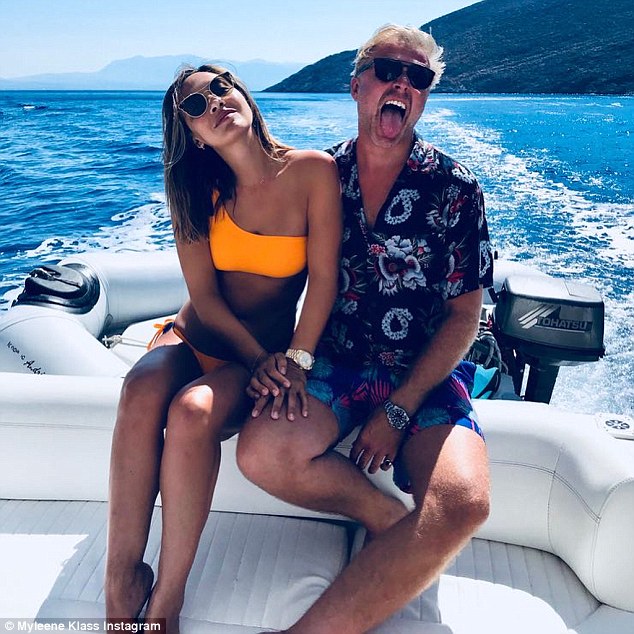 Must be love: When she’s not at work she spends with her kids and boyfriend Simon Motson, who Myleene went public with in May last year’

The star has been working non-stop for her afternoon show on Smooth every day, while continuing to front her weekend morning show for Classic FM.

When she’s not at work she spends her time with her daughters Ava, 10, and Hero, seven, whom she shares with her ex-husband Graham Quinn.

She has also been inseparable from boyfriend Simon Motson, who Myleene went public with in May last year, and the brunette recently raved of their romance: ‘He is so hot. It’s lovely. I’m enjoying myself.’

Myleene’s ex walked out on her 34th birthday in April 2012 putting an end to their decade-long relationship. The former couple finalised their divorce in 2013.

Discussing her devastation, she admitted to Woman magazine: ‘I thought I’d never smile or trust anyone ever again.’

Simon has been married before but is also divorced and is a father-of-two.

The pair met in 2015 shortly after Simon had split from his wife, but kept a low profile until Simon’s divorce was finalised.