Klass was only 12 years-old when she first met the former Countdown presenter, 57, and the pals delightedly came together for a snap at RAF’s consecration parade for 617 Squadron’s new standard in Norfolk on Friday.

‘Have known her for forever…since back in the day when I wanted to be an engineer,’ Myleene, 40, captioned the snap, before adding: ‘Today we’re at RAF Marham for something very special.

‘Back in the day’: Myleene Klass and Carol Vorderman joined forces nearly two decades after they first met 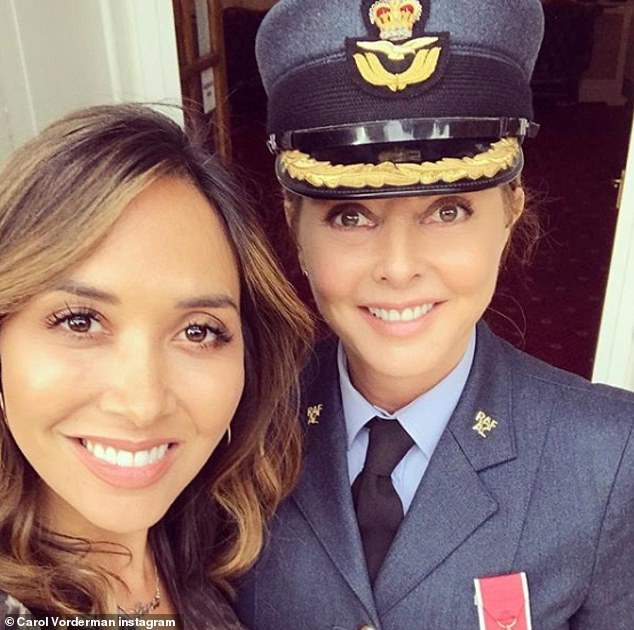 Myleene added a slew of photos chronicling their friendship over the years and the oldest image saw the former Hear’Say star as a school girl as an adult Carol towered over her.

A slew of further images saw them through the years as they were frequently reunited at events.

Meanwhile, Vorderman ensured all eyes were on her at RAF Marham in Norfolk thanks to her incredibly smooth visage and her sharp pilot uniform.

The Dambusters got their nickname after embarking on a night-time raid on three heavily defended dams deep in Germany’s industrial heartland. 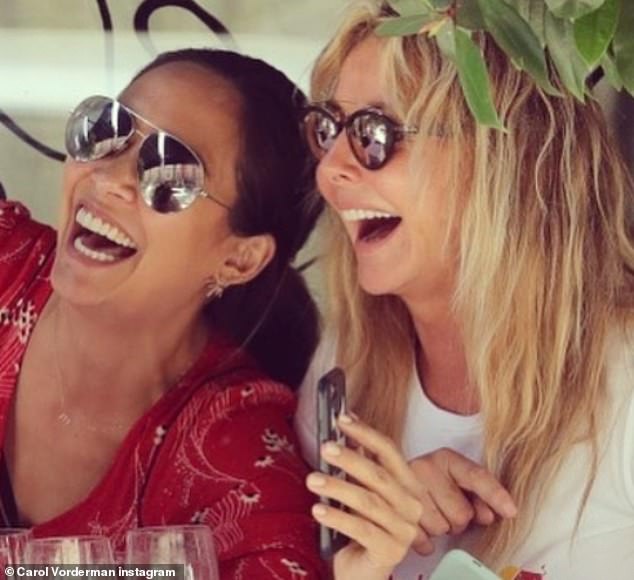 They flooded the Ruhr valley and delivered a crucial blow to the Nazi war machine.

Their success was immortalised in the classic 1955 film The Dambusters, its thrilling theme tune and gung-ho script evoking the best of British.

The glittering event takes place every 25 years and this is the first standard since the squadron reformed in April.

At the event, the Countdown host discussed how she was left disappointed when she couldn’t join the RAF during her university days.

She said: ‘I wanted to join up as a fighter pilot when I was in my teens. I went to Cambridge University and I did an engineering degree.

‘But I wasn’t allowed to join the university squadron because I was a girl, back in the seventies. But I don’t bemoan this fact.

‘My daughter went to Cambridge University and she was allowed to join up.

‘She was in her squadron for four years. It’s a celebration for me that things have changed so much.’

Meanwhile, in another snap, Myleene went on to reveal her day with the RAF had ‘blown her mind’ and she shared why she had attended the event when she took to her Instagram platform.

‘I love the #RAF. They flew me out to Afghanistan where I was entertaining the troops, ditto Norway where they managed to land on a mountain top, in the dark, in the thickest of snow in -40 conditions. They’ve always brought me home safely.

‘They are incredible and today has absolutely blown my mind. #forces #navybrat #f35 #raf #royalairforce.’ (sic)