Myleene Klass has hit back at a troll who claimed her boyfriend Simon Motson will cheat on her.

The broadcaster, 42, posted a gallery of sweet images with the PR executive, 45, on Wednesday to celebrate five years since they had met.

The troll wrote underneath: ‘Not long before this one cheats on you. Dear oh dear, heading for the lawyers are we?’

Myleene clapped back: ‘He wishes! Cheating exes usually get a house, a car and a fat pay-off.’

‘Cheating exes usually get a house, a car and a fat pay-off’: Myleene Klass has hit back at a troll who claimed her boyfriend Simon Motson will cheat on her 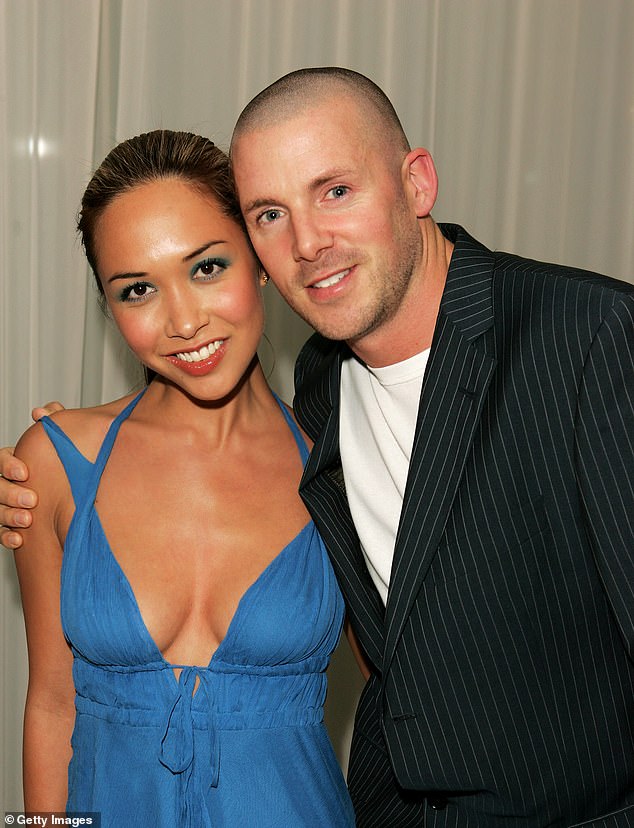 Dig: The mother-of-two’s words appear to be a pointed dig at her ex-husband Graham Quinn, who left her on her 34th birthday in 2012 (pictured in 2005)

The mother-of-two’s words appear to be a pointed dig at her ex-husband Graham Quinn, who left her on her 34th birthday in 2012.

The heartbreaking incident came just six months after the couple’s wedding, but they had been together for 11 years at the time, after meeting when Graham became the bodyguard for Myleene’s pop group Hear’Say in 2001.

The former couple are parents to two daughters, Ava, 13, and Hero, nine. It has never been confirmed that Graham was unfaithful.

Myleene was then devastated to learn that he had secretly bought a bachelor pad for himself – meaning that he must have been planning his departure for some time. 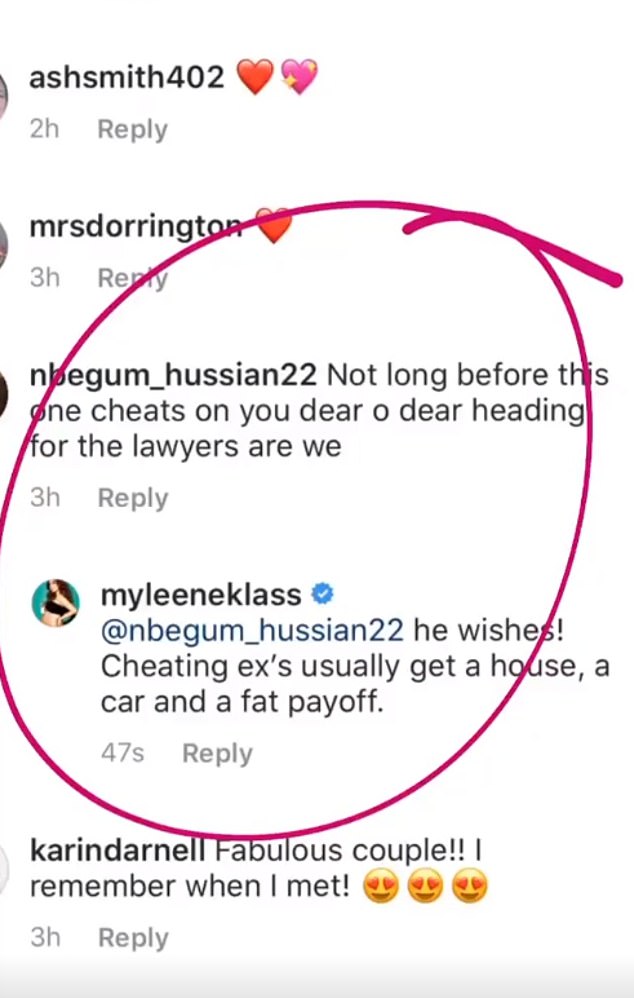 Something to say: Myleene’s words came in a response to a troll and she posted them on her Instagram Stories on Wednesday 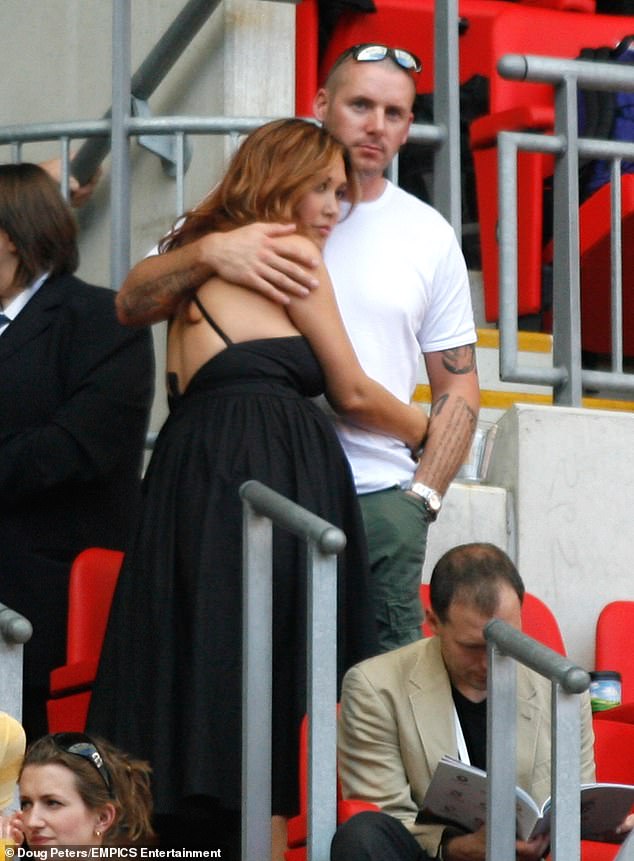 Former flame: Myleene and Simon began dating in 2015 after she split from Graham (pictured in 2007) and they welcomed their first child together, son Apollo, in August last year

The broadcaster was said to be blindsided by the split after supporting Graham, who had a drugs conviction.

Speaking in an interview with Woman magazine in 2015, Myleene said: ‘I felt so betrayed and so crushed. But I couldn’t wallow in it. I said to my mum and dad, “I’m broken, but I will not sink”.

‘I just had to keep going because my girls would be up every morning asking me to make breakfast or fetch their recorders. My girls saved me.’

Multi-millionaire Myleene also admitted those close to her begged her to sign a prenuptial agreement when she married Graham to protect her assets.

‘I married a convicted drug dealer and didn’t sign a pre-nup’, she previously told the Mirror. ‘What was I thinking? When I say that sentence aloud, I realise how stupid it was.

‘I just wish I had listened to my dad, my friends and everyone in the papers. Everyone could hear the alarm bells except me. I should have just opened my eyes.’ 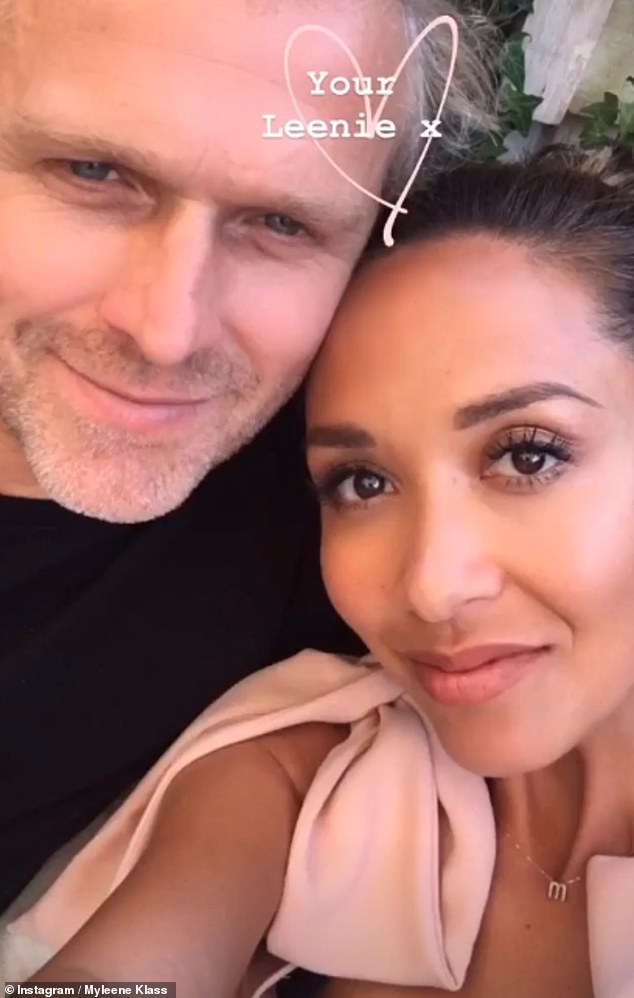 Cute: The broadcaster, 42, posted a gallery of sweet images with the PR executive, 45, on Wednesday to celebrate five years since they had met

Myleene and Simon began dating in 2015 after being introduced by two mutual friends and they welcomed their first child together, son Apollo, in August last year.

The presenter, took to Instagram on Wednesday to share a selection of photos from her relationship with Simon, gushing she ‘loved him forever and always.’

Myleene shared several snaps to her Stories accompanied by the ever-romantic Your Song by Elton John, including one from a recent holiday as they sped across the ocean in a boat.

Another showed the couple on a bike ride together, while one image showed them cuddling together in a hammock. 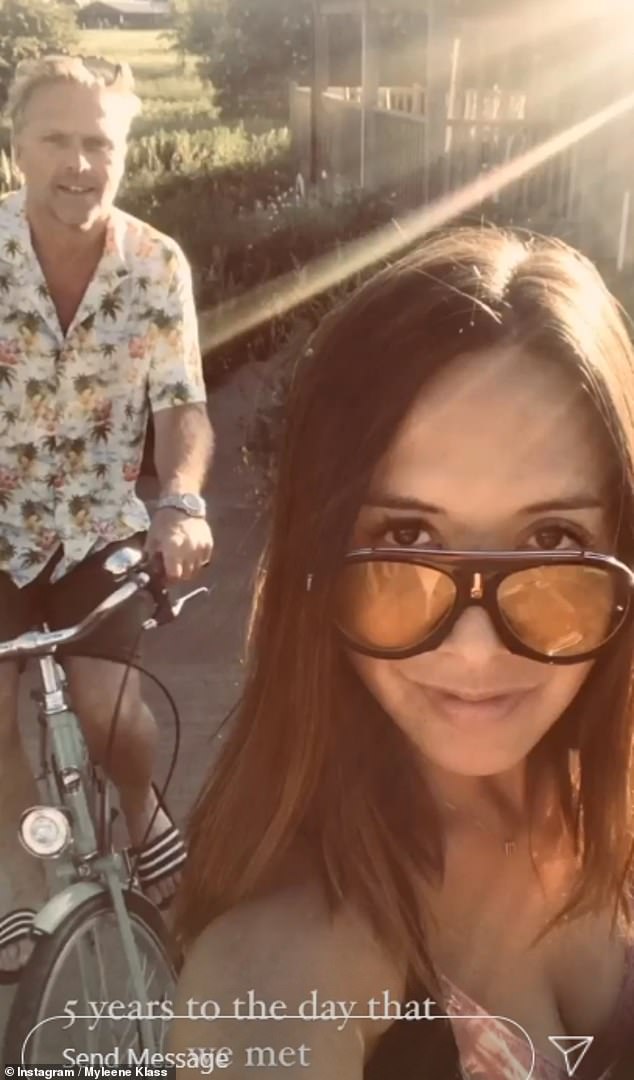 Loved-up: The presenter took to Instagram Stories to share a selection of photos from her relationship with the PR guru gushing she ‘loved him forever and always.

Across the five posts she wrote: ‘5 years to the day that we met… Happy Anniversary… Can’t wait to do the next 5 and the 5 after that and, and, and… I love you Always and forever… Your Leenie x.’

Simon is also divorced and has a son and a daughter who are the same age as Myleene’s girls, making a blended family of seven.

Although the star previously ruled out getting married again after what happened with her first husband, she recently said she would be open to having another baby and tying the knot with businessman Simon.

Myleene said in an interview with Hello! magazine: ‘I would not say no to another baby. I don’t want to tempt fate. Who knows what life has got planned for you? 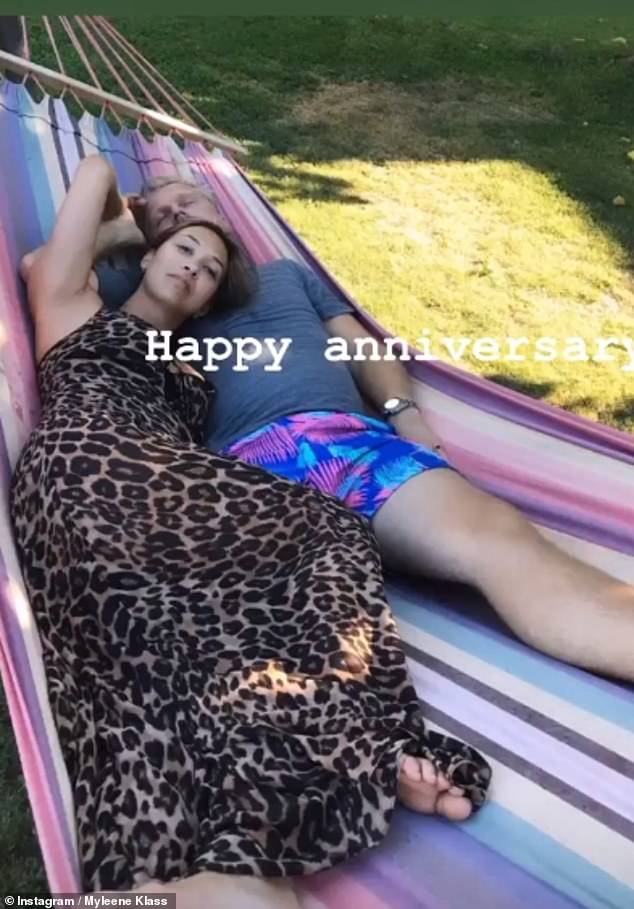 Sweet: One snap showed Myleene and Simon relaxing together on a hammock as she shared a collection of snaps documenting their romance

‘We didn’t know we would even get him [Apollo]. The kids would love it if we had another baby. Simon is raring to go.’

Myleene also joked that her daughters have been ‘on Simon’s case’ to propose and said they’ve already got a wedding ‘all planned out’ for the couple.

She added: ‘My girls are definitely on Sim’s case about it [marriage]. I suppose it’s just children’s way of solidifying what’s around them. The kids just want a party.

‘Sim doesn’t get a say in it either. It’s genuinely down to the children. They’ve got their own conflab going on between them and have planned it all out.

‘They have even decided the baby will be the ring bearer! There are no weddings this year. But 2021? They would love that!’ 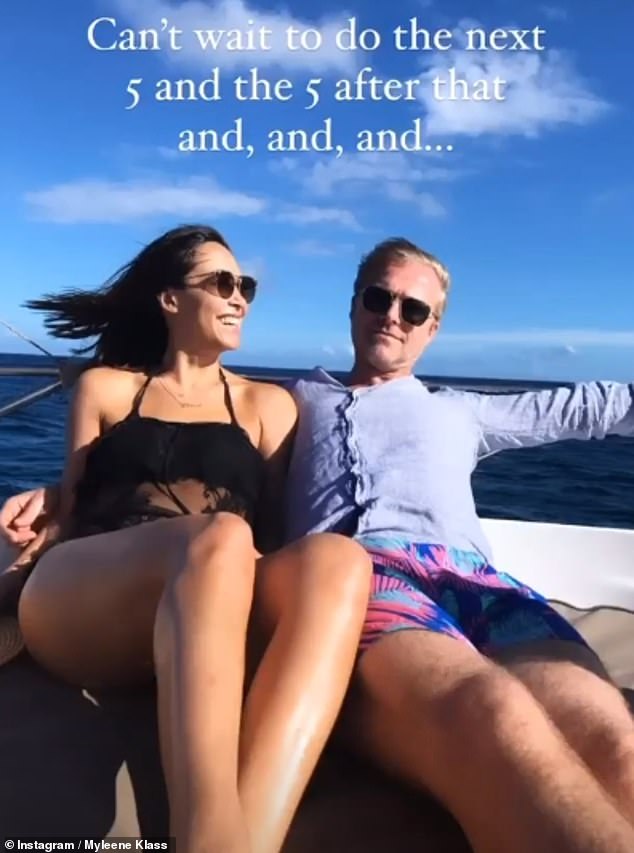 Adorable: One image showed Myleene and Simon enjoyed a boat ride during a recent romantic getaway

Myleene recently admitted she feared she would be a single mum to her girls forever before she met Simon.

Speaking to Sophie Ellis-Bextor on her podcast, Spinning Plates, last month, she said: ‘I thought I was going to be a single mum forever. The first shock of being a single mum was horrible.

‘It’s not a blueprint I recognised, when I got into the role of a single mum, I had the fear of, “How am I ever not going to be a single mum?” I really like how this flows. I really love me and my girls, it feels like it’s us against the world.

‘I love that we go everywhere together, I love that they’re my three amigos, it’s a really lovely feeling.’ 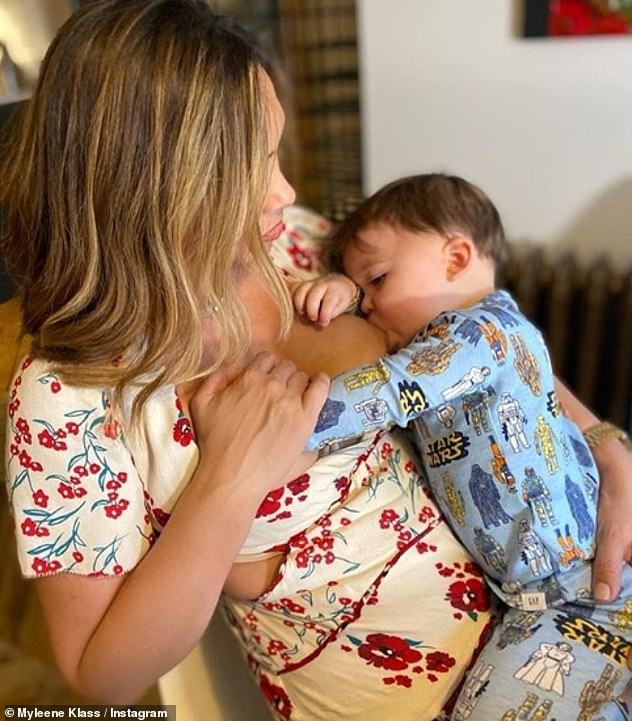 Candid: Since giving birth to her son Apollo last year, Myleene has been doing her bit to normalise breastfeeding and recently shared another picture of herself feeding her little boy