Well if ain’t broke… Myleene Klass, 44, recreates THAT famous I’m A Celebrity bikini moment as she models white swimwear from her Next collection – 16 years later

She hit the headlines when she posed in a white bikini under a waterfall when she appeared on I’m A Celebrity… Get Me Out Of Here in 2006.

And it looks as though Myleene Klass has drawn inspiration from that moment with one of the swimwear looks from her new Next collection.

In a video of the collection shared on Instagram on Monday, the 41-year-old looked incredible in the busty two-piece along with a selection of other looks. 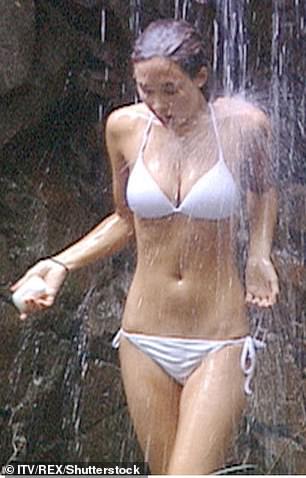 16 years later…  Myleene, 44, has created a white bikini from her Next collection, which is similar to the one she wore on I’m A Celebrity (right), back in 2006 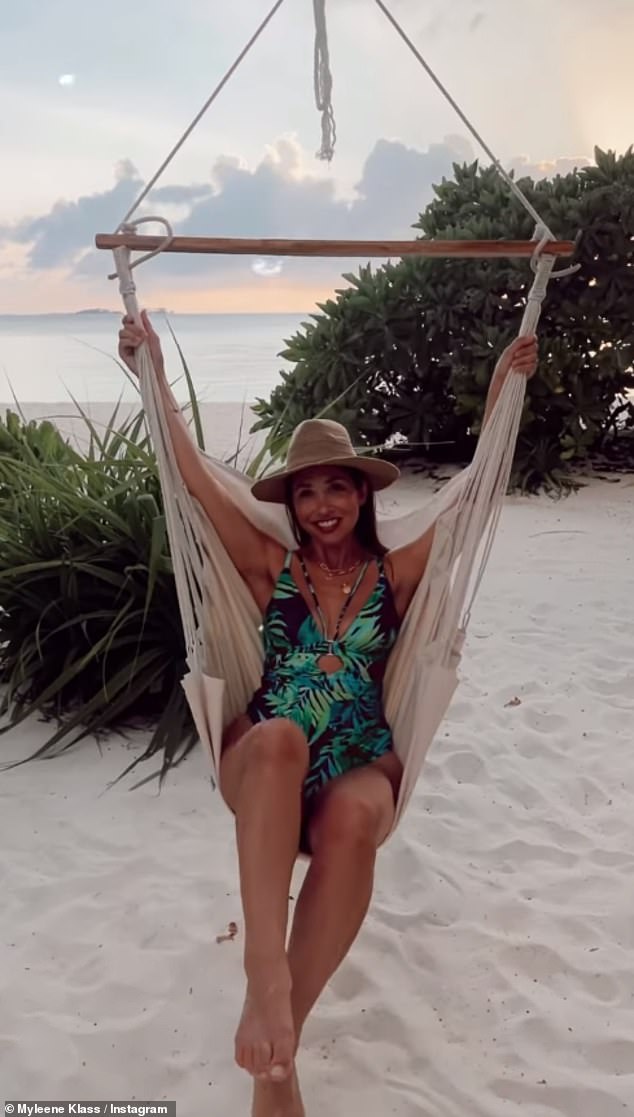 Looking good: Myleene also looked incredible as she posed in a hammock wearing a palm-print number from a tropical location

Back in 2020, she reflected on the swimwear that helped to make her a househoel name.

She penned: ‘I can’t believe that @imacelebrity started again tonight. It feels like I was in the jungle only yesterday! Every time I see this pic pop up, I can’t believe how fate handled it all.

‘I remember one of the shows producers looking at my bikinis in the hotel before I went to camp. One was covered in stripes. ”We’ll have to stop at the shops as that’s probably going to strobe on camera”.

‘I ran into the shop en route to the jungle, asked the shop assistant for the plainest bikini she had. 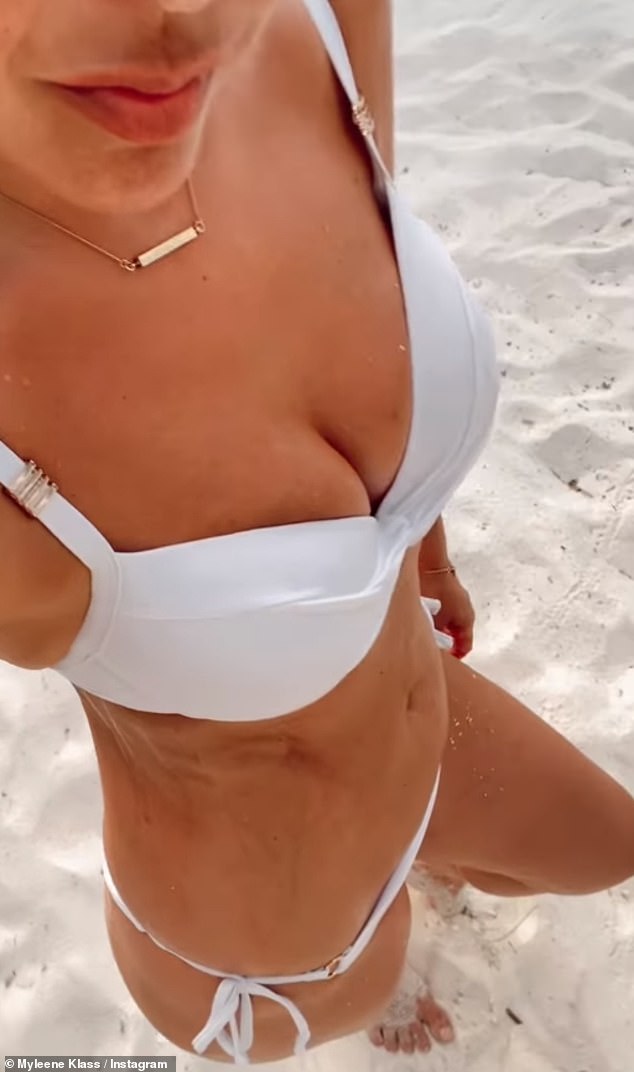 Incredible: She shared a sizzling video on Instagram which saw her pose up a storm in several pieces as she promoted the new collection that recently launched

‘Best $40 I ever spent….especially as it raised so much for charity afterwards. Goodluck to the contestants. Hope the new outdoor shower isn’t too cold!!!’

Myleene looked sensational with her slicked back as it was drenched with water while opting for a fresh face.

She accessorised with several chunky gold necklaces and a straw hat while laying on a hammock living her best life.

The singer then looked red hot as she showed off her ample assets in a plunging swimsuit while going for a relaxing swim in the pool. 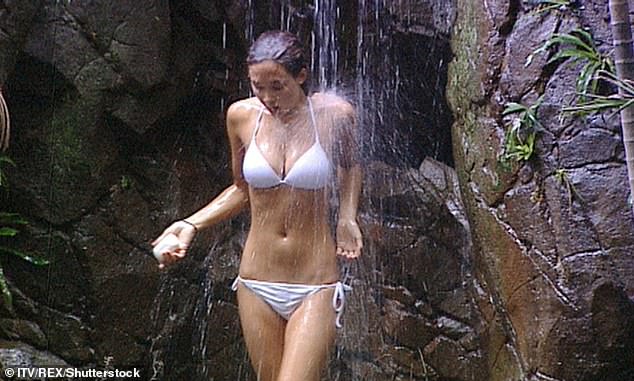 ‘Best $40 I ever spent!’: Myleene previously reflected on the success of her white bikini and shower scenes on I’m A Celebrity (pictured in 2006 show still)

The leaf print seemed to be a staple in her collection as she donned a swimsuit, bikini and mesh wrap all with the same design.

She posed up a storm during the beach shoot to promote the new Next collection after working with them on several other projects.

It comes after she took to Instagram to show off her daughter Hero’s 11th birthday celebrations last weekend. 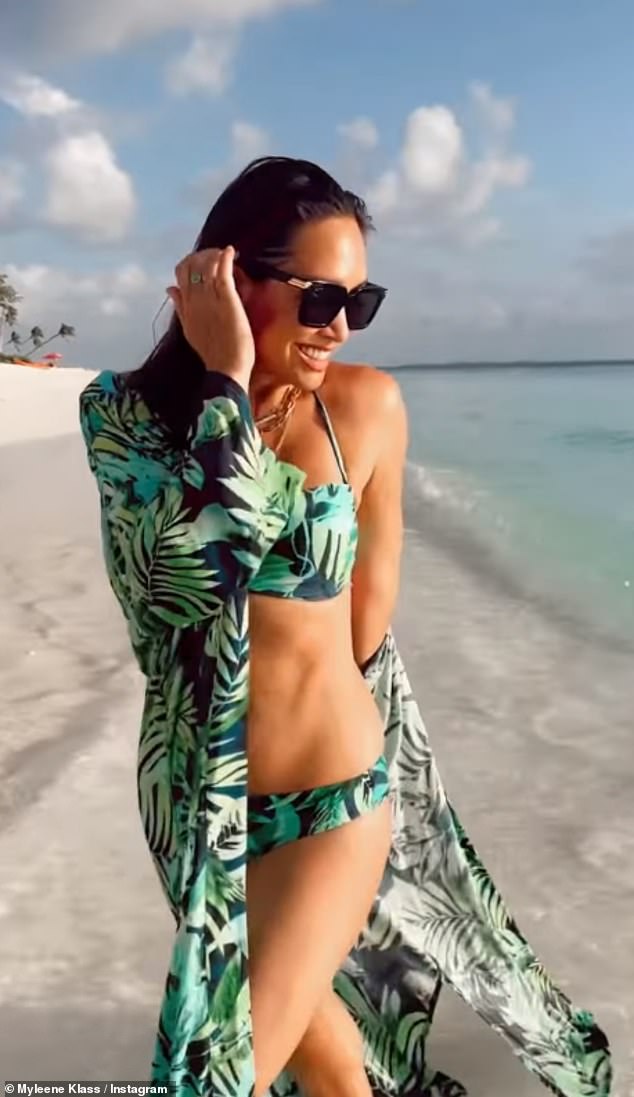 Stunning: The leaf print seemed to be a staple in her collection as she donned a swimsuit, bikini and mesh wrap all with the same design 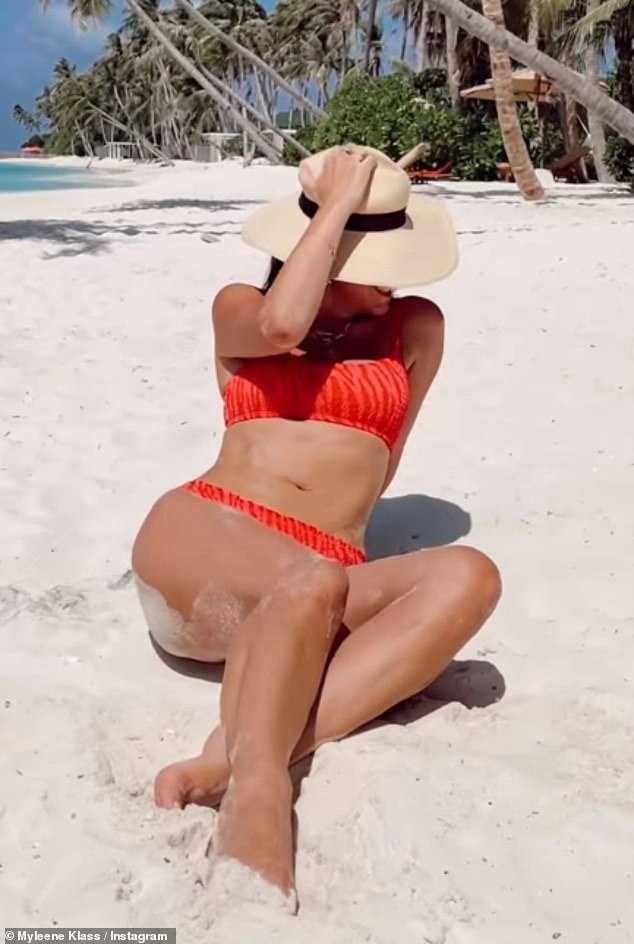 Soaking up the sun: She posed up a storm during the beach shoot to promote the new Next collection after working with them on several other projects

The spectacular birthday party was full of decorations and snacks from balloon arches to a doughnut wall.

With a glamping theme throughout the family’s garden was recreated with glamorous tents set up by Sleepy Teepee who specialise in luxury teepees.

Myleene shared a sweet video showing the preparation before the big event where everyone was having a great time.

She captioned the post with ’11 yo bdays are the best! Hero we adore you. Happy Birthday x’. 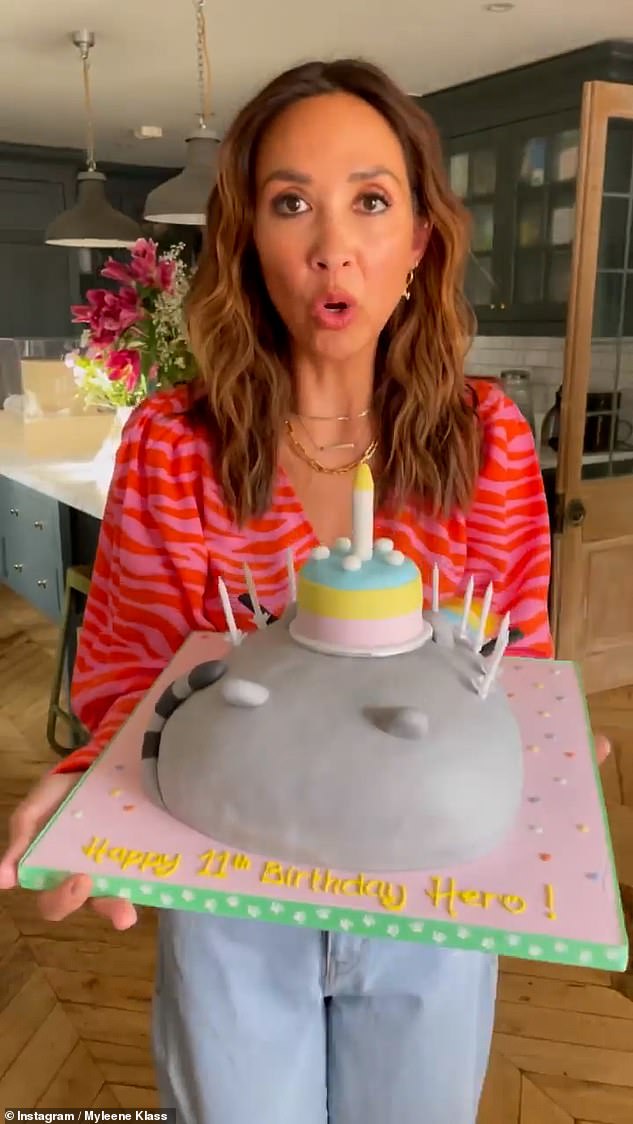 The enormous teepee tent housed a row of relaxing pamper beds with faux fur rugs at one side, while a T-shirt rack which hung ‘Klass of 2022’ printed T-shirts sat at the other corner.

A perspex donut wall also graced the tent, with iced donuts hung up in neat rows on a sheet of material which read ‘Treat yourself’

Hero’s cake was personally designed into the shape of cartoon character Pusheen – with her little brother Apollo helping his mum make the finishing touches as he stuck candles into the side.

Celebrity friends such as Kate Garraway and Susanna Reid commented on the post sharing birthday wished to the birthday girl. 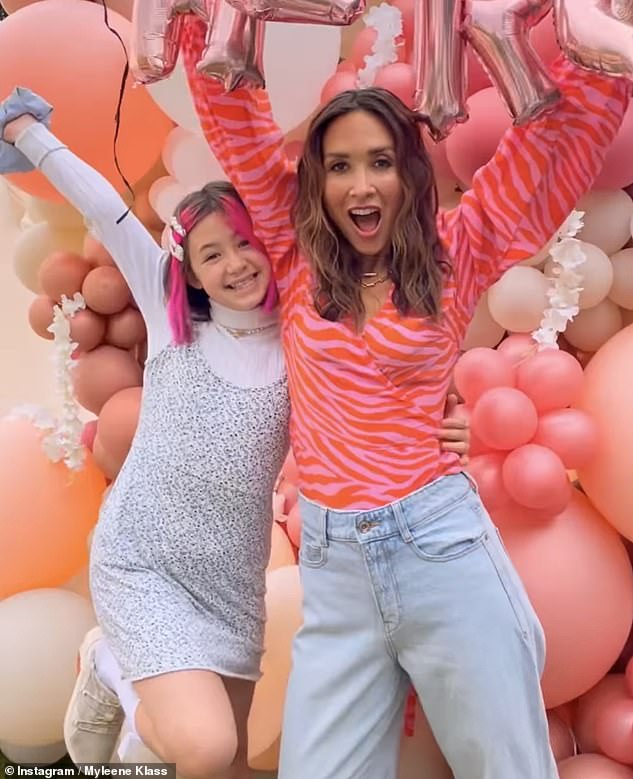 Wooh: Myleene  captioned the post with ’11 yo bdays are the best! Hero we adore you. Happy Birthday x’