Mysteries of the senses: The boy who broke almost every bone in his body – but didn’t feel any pain

Most young siblings spend their summer holidays building dens together, or imaginary castles out of cardboard boxes. But playtime for Paul Walters and his sister Vicky, from Essex, was somewhat more dangerous – usually landing them in hospital.

Those of a faint disposition may want to stop reading now.

They’d often be found attempting to pull out their own teeth, burning their hands on an open fire or, a particular favourite, sitting directly in front of a swing before it pelted them in the face.

The reason for this shocking behaviour: neither Paul nor Vicky can feel physical pain.

They were born with the disorder congenital analgesia, in which, for a variety of reasons, the messages that normally carry the ‘warnings’ of pain from one place in the brain are somehow interrupted.

Playtime for Paul Walters and his sister Vicky as children, pictured, was dangerous – usually landing them in hospital

Why the condition occurs isn’t fully understood. Sufferers’ other sensory perceptions are completely normal – they perspire when hot and are sensitive to touch. But when it comes to pain, be it a burn or injury, they feel nothing.

It is so rare, just a few hundred people across the world are believed to suffer from it.

And although it may sound like some kind of superpower, it’s far from it. Those with the condition commonly suffer horrendous, disabling injuries.

One reason it’s so rare is that few people with congenital analgesia reach adulthood as, unconstrained by pain, they do ever more dangerous things.

Now 35, Paul, a retail supervisor, says: ‘I’ve broken just about every major bone in my body.’

Their father, Bob, adds: ‘As children, they would place their hands in front of the fire just to listen to their skin sizzling – almost like a steak in a frying pan. Their hands would blister but it only made them laugh. They both broke their nose, had black eyes and needed stitches in their heads. Yet all the time they thought it was funny.’

Paul says that the constant litany of bone-shattering injuries he endured throughout childhood has stunted his growth. Today, he stands under 5ft tall.

‘Psychologically, the biggest effect of the condition has been on my height – I hate being short,’ he says. ‘It happened because I used to do stupid things like jumping down the staircase, or off a roof. There was no downside because I never felt the pain of breaking a bone. All I noticed was that I was getting loads of attention.’

At the end of this month, Paul’s exceptional story will be heard for the first time, along with several other medical mysteries, in a fascinating new BBC radio series.

Presented by leading neurologist Dr Guy Leschziner, it reveals the weird and wonderful things that happen when our senses go haywire. Dr Leschziner travels the breadth of the country meeting those plagued by bizarre conditions that affect how they smell, taste, touch and hear. There are those who can ‘hear’ their eyes moving inside their head, a man who can ‘taste’ words and a woman who sniffs roses and detects a repugnant smell of sewage. 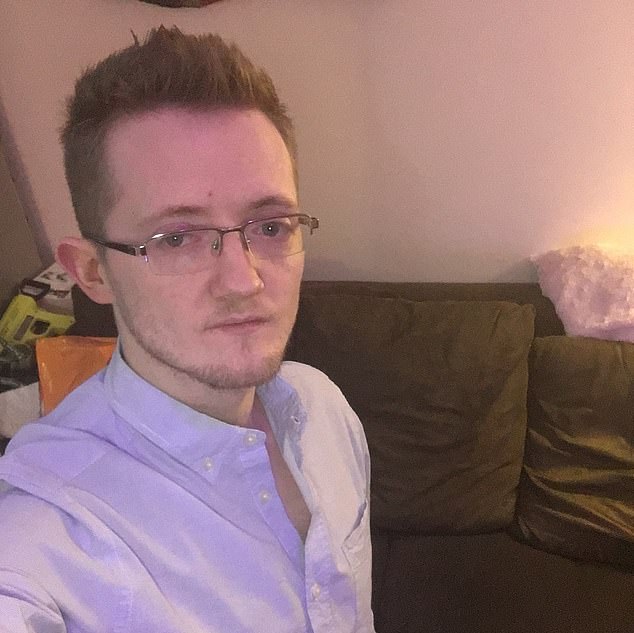 Paul says that the constant litany of bone-shattering injuries he endured throughout childhood has stunted his growth as today, pictured, he stands under 5ft tall

‘Our senses can be surprisingly strange,’ says Dr Leschziner, who treats patients with these types of problems at St Thomas’ Hospital in London. ‘Especially when they malfunction due to injury, disease or genetic abnormalities.’

The reason for Dr Leschziner’s investigations, documented in the upcoming five-part series, is not merely entertainment.

‘These rare cases are vital for helping us to improve our fundamental understanding of how our senses work,’ he says. ‘They may pave the way for new treatments for these and other conditions.’

In the case of congenital analgesia, experts hope one day to create new painkilling medicines by studying the condition.

During the series, Dr Leschziner also meets 61-year-old James Wannerton, from King’s Lynn in Norfolk, who since early childhood has been able to ‘taste’ words. Doctors first dismissed James’ claims as the product of a young imagination. But brain scans showed areas associated with taste become more active when he reads words. Certain sounds even make him feel hunger pangs.

‘My name tastes like chewing gum that’s lost most of its flavour,’ says James. ‘My father’s name, Peter, tastes like processed peas, while my sister’s is blackcurrant yogurt and my grandmother’s was creamy, thick, condensed milk.

‘As a young boy going to school with my mum on the train, I’d read the names of the stations out loud, as we passed through.

‘A particular favourite tube was Tottenham Court Road because Tottenham had the taste and texture of sausage, Court was like a lovely crispy fried egg and Road was like toast. So it was almost like a full English breakfast.’

James’ condition is called synaesthesia – where the senses become jumbled. And it’s not too uncommon, affecting roughly one in 2,000 Britons, to some degree. The stimulation of one sense can cause an involuntary reaction of another – seeing colours when you hear certain words, for instance. 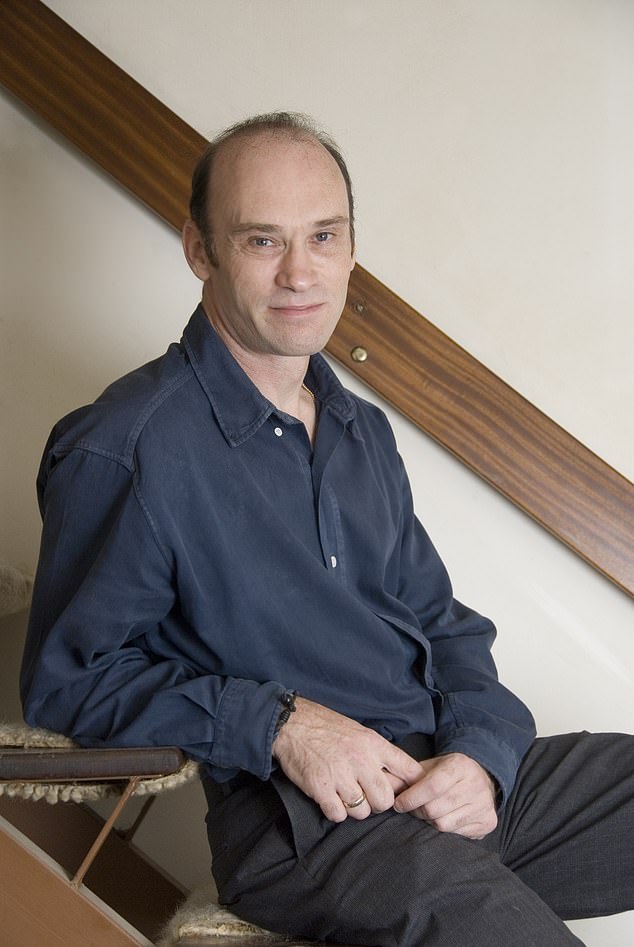 Paul’s exceptional story will be heard for the first time in a fascinating new BBC radio series, along with several other medical mysteries, including James Wannerton, pictured in 2008, who has been able to ‘taste’ words since childhood

Doctors don’t yet know the specific process that causes this but it is thought to involve the misfiring of brain cells, akin to the phenomena experienced by many of feeling physical reactions, such shivers or goosebumps, when hearing rousing music.

For James, not every word evokes a pleasant taste or smell. ‘I was at a social function once where a woman called Maureen asked me to describe how her name tasted,’ he says. ‘I had to break the news to her that it was, sadly, like vomit.’

While this is, ultimately, harmless – if bizarre – other problems can be simply terrifying for the sufferer. Imagine chatting with friends over dinner, and suddenly being deafened by the sound of your own lungs, heaving up and down in your chest. It may sound like a scene from a horror film. In fact, it is 50-year-old Mark Buschhaus’s reality.

The toy shop owner from Crawley in West Sussex first noticed a strange change in his hearing during his 40s.

While in the pub with friends, conversation would be drowned out by one specific bodily noise, such as the sound of his teeth crunching a crisp, or, more disturbingly, the squelching movement of his eyeballs as he glanced around the bar.

‘It was as if someone had turned up my internal volume control to 100,’ says Mark.

‘I felt like I was in a bubble. Every time I took a step, my footsteps sounded like a big bang that sent echoes through my skull. I could even hear my lungs breathing.

‘It got to the stage where I didn’t want to go out and was making excuses about going to the pub.

‘I’ve never felt so low – I was really struggling.’

After years of misery, Mark finally got a diagnosis – superior canal dehiscence syndrome.

The condition, which affects one to two per cent of Britons, is caused by tiny holes inside the inner ear which affects the way internal sound is processed by the brain. Doctors are unsure what causes the holes, but they are thought to be present from birth. 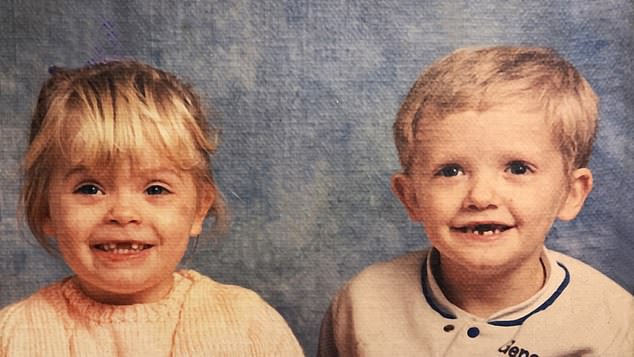 Bob Walters, father of Vicky and Paul, pictured as youngsters, said his children ‘would place their hands in front of the fire just to listen to their skin sizzling – almost like a steak in a frying pan’

Bodily sounds can leak through the small openings in the inner ear and reverberate in the brain, making them appear louder than usual. Some sufferers can hear the blood flowing through their veins, while others are haunted by the thumping sound of their heart beating.

Thankfully, following pioneering surgery to repair the hole, Mark saw an ’80 to 90 per cent improvement’ – and was able to enjoy going to the pub again.

Elsewhere, Dr Leschziner explores the devilish brain tricks that affect all of our senses – those that occur with age.

A quarter of Britons over 65 suffer some form of hearing loss. But, for a small number of these people, the world doesn’t only get quieter, it sounds stranger, too.

It is estimated that roughly three per cent of those in their 60s suffer auditory hallucinations.

In other words, they hear sounds that aren’t there.

Dr Leschziner explains that when we start to lose our hearing, the auditory cortex, part of the brain that processes sound, can become overactive because it is being starved of the input it normally gets from the ears.

This hyperactivity then interacts with memory circuits in the brain – which explains why the phantom sounds are often based on long- held memories.

‘I was in the house and I thought somebody next door was playing music very loudly,’ the ex-Goodies star tells Dr Leschziner.

‘It sounded like a brass band, with a lead trumpet player and occasionally some male vocals, and even an announcer. But as I went towards the wall it faded. This went on for weeks.’

These bizarre symptoms often lessen if hearing improves, so patients are encouraged to try hearing aids – which Bill plans to do.