Mysterious hepatitis outbreak in children will continue ‘throughout the summer’, expert warns

America’s outbreak of mysterious hepatitis will continue ‘throughout the summer’ and many cases are already undiagnosed, a top virologist warned Friday — as the global death toll hit 12 with five fatalities in the United States.

Scientists are puzzled by the cause, but leading theories suggest a type of adenovirus spread by touching feces-contaminated surfaces is behind the illness.

Dr Matthew Binnicker, the director of clinical virologist at the Mayo Clinic in Minnesota, told DailyMail.com cases will continue to crop up throughout the year as its transmission does not ‘tend to be seasonal’.

He warned schools and day care centers — where many children mix — were major hubs for spreading the virus.

Dr Binnicker also warned many hepatitis cases among children remain undiagnosed in the U.S. because, in some cases, children will not have been unwell enough for their parents to take them to a doctor or hospital.

The majority of children with the mysterious hepatitis in the U.S. have tested positive for adenovirus, but it is not clear whether the virus itself is causing the illness or the infection alongside another factor such as a previous Covid diagnosis.

Adenoviruses are relatively common among children, but until this year were rarely associated with hepatitis. The common causes of the illness — hepatitis viruses A, B, C, D and E — have all been ruled out.

At least 12 children have now died from the mysterious hepatitis worldwide, with five fatalities also reported in Indonesia and one each in Ireland and Palestine.

More than 110 cases across 26 states have been registered so far, with 15 children becoming so severely ill they needed a liver transplant.

Globally, there have been 450 cases reported across 21 countries mostly among children under 10 years old. Most are in the UK (160), which first spotted the outbreak. 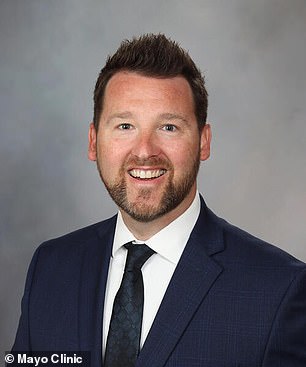 Dr Matthew Binnicker, a clinical virologist at the Mayo Clinic, warned cases would continue to crop up this year

Speaking exclusively to DailyMail.com, Dr Binnicker said: ‘I would not be comfortable saying this outbreak has peaked.

‘This type of adenovirus we don’t tend to think of as seasonal, we will continue to see cases throughout the year.’

The adenovirus most children with mysterious hepatitis have tested positive for is scientifically termed type 41.

This infects the gastric system, sparking symptoms including diarrhea and vomiting.

It is spread via the fecal-oral route, or when someone touches a surface contaminated with feces and later touches their own mouth.

Asked whether many more cases would be spotted in the U.S., Binnicker warned many were likely still to be diagnosed because they were more mild.

Q&A: What is the mysterious global hepatitis outbreak and what is behind it?

Hepatitis is inflammation of the liver that is usually caused by a viral infection or liver damage from drinking alcohol.

Some cases resolve themselves, with no ongoing issues, but a fraction can be deadly, forcing patients to need liver transplants to survive.

They may also suffer from jaundice — when the skin and whites of the eyes turn yellow.

Why are experts concerned?

Hepatitis is usually rare in children, but experts have already spotted more cases in the current outbreak than they would normally expect in a year.

Cases are of an ‘unknown origin’ and are also severe, according to the World Health Organization.

What are the top theories?

Experts say the cases may be linked to adenovirus, commonly associated with colds, but further research is ongoing.

This, in combination with Covid infections, could be causing the spike in cases.

Around three-quarters of British cases have tested positive for the virus.

British experts tasked with investigating the spate of illnesses believe the endless cycle of lockdowns may have played a contributing role.

Restrictions may have weakened children’s immunity because of reduced social mixing, leaving them at heightened risk of adenovirus.

This means even ‘normal’ adenovirus could be causing the severe outcomes, because children are not responding to it how they did in the past.

Other scientists said it may have been the adenovirus that has acquired ‘unusual mutations’.

This would mean it could be more transmissible or better able to get around children’s natural immunity.

UKHSA officials included ‘a new variant of SARS-CoV-2’ in their working hypotheses.

Covid has caused liver inflammation in very rare cases during the pandemic, although these have been across all ages rather than isolated in children.

The CDC has noted environmental triggers are still being probed as possible causes of the illnesses.

These could include pollution or exposure to particular drugs or toxins.

‘Hepatitis can occur on a sliding scale of causing an individual to be hospitalized to the other end where it is much more mild,’ he said.

‘In [the mild] cases, it may not prompt parents to take their child for investigation, or to the hospital.

‘Many of these children will experience gastroenteritis symptoms such as vomiting, diarrhea and nausea, with some also facing an upper respiratory illness so a cough or sore throat that’s preceding hepatitis.

‘Those who then develop hepatitis will see changes in skin color, so some develop symptoms of jaundice or yellowing of the skin… ranging from very very noticeable to very very subtle changes.

‘A yellowing white of the eye is also something that is very apparent and parents get very shocked some times, but other times it is very very subtle and may not be noticed.’

He said that with about 90 percent of children who went to see a physician being hospitalized it would mean there is just a ‘small percentage’ who were not sick enough to go to the doctors.

He added it was still too early to say whether the U.S. would detect the most cases in the world, with it currently ranking in second.

But he said that because the country has such a large population it would suggest there are ‘far more here than in other countries’.

The UK — which is home to 67 million people — has recorded the most cases in the world so far at more than 160.

But the U.S. — where nearly five-times more people live or 329 million — has registered the second highest case count at more than 110.

Both countries have detected more hepatitis than others because of stronger surveillance systems for the diseases.

He said hepatitis cases that have not been diagnosed but have got better on their own should not worry parents, as they will be unlikely to have any long-term effects.

But any parents who are concerned about their child should take them for a check up.

He has contacted the Centers for Disease Control and Prevention (CDC) to offer to help test samples from patients for adenoviruses.

But at present he said the offer had not been taken up, likely because there was only a relatively small number of cases to date.

And North Carolina more than quadrupled its tally from two cases to nine.

Both states were previously known to have hepatitis cases, although they have now provided updated figures.

It is not clear how many of these were already included in the CDC’s count of mysterious hepatitis cases.

Most cases in the U.S. have been reported from around October to March.

But this week Hawaii said it had a case that had been hospitalized for a few days at the end of April.

At least one case has also been reported in the territory of Puerto Rico.

The CDC has refused to reveal where the five U.S. deaths occurred, citing ‘confidentiality issues’.

But at least one was in Wisconsin, where the Department of Health confirmed last month it was probing a fatality linked to the illness. 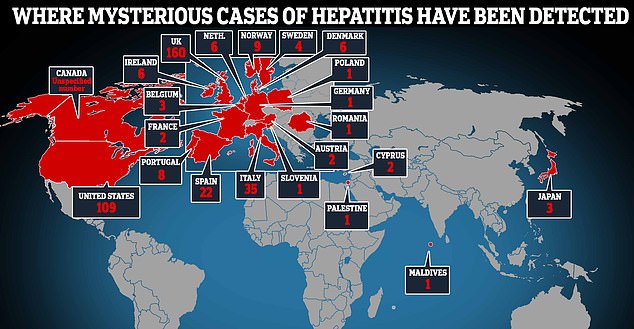 In a press conference last week, the CDC’s deputy director for infectious diseases, Dr Jay Butler said most of the youngsters had ‘fully recovered’ following the illness.

He said scientists were still probing cases to establish a cause but that adenoviruses were ‘top of the list’.

Scientists are puzzled as to what is causing the unusual illness, but the main theory is that it is triggered by a group of viruses that normally cause the common cold.

The common viruses that cause hepatitis: hepatitis viruses A, B, C, and E; have not been detected in any of the cases reported worldwide.

Scientists are probing whether a mutated strain of adenovirus has evolved to become more severe, or if a lack of social mixing during the pandemic weakened children’s immunity.

They also have not been able to rule out an old Covid infection being involved.

In a bizarre twist, health officials are also investigating whether exposure to a ‘pet dog’ could be to blame for the illness.

The UK has said it is looking into this as a cause after finding more than half of patients for hepatitis were exposed to canines or had them at home.

But experts have warned this seems a bit ‘far fetched’ because dog ownership is so high in the UK.

Covid vaccines have been ruled out as a potential cause of the illness because the vast majority of ill children were ineligible for the jabs.

In new guidance this week, the CDC in the US has told doctors treating children with hepatitis to take liver samples for analysis.