With less than a month to go until the NBA playoffs, the struggling Cleveland Cavaliers will be forced to make do without head coach Tyronn Lue for the indefinite future.

Lue has been battling an unknown illness during a difficult time for the third-place Cavs – a team many expected to cruise to a first-place finish in the Eastern Conference. Exacerbating matters is the fact that franchise cornerstone LeBron James is a free agent this summer, and Cleveland’s ability to win a second NBA title in June could ultimately determine whether or not the Akron, Ohio native decides to stay or go.

The Cavs beat the Chicago Bulls 114-109 Saturday, but had to finish the game without Lue, who stayed in the locker room after halftime because of the illness.

Coach Tyronn Lue (right) has been battling an unknown illness during a difficult time for the third-place Cavs. Franchise cornerstone LeBron James (left) is a free agent this summer, and Cleveland’s ability to win a second NBA title in June could ultimately determine whether or not the Akron, Ohio native decides to stay or go. The Cavs previously won a title under Lue in 2016

‘After many conversations with our doctors and [general manager] Koby [Altman] and much thought given to what is best for the team and my health, I need to step back from coaching for the time being and focus on trying to establish a stronger and healthier foundation from which to coach for the rest of the season,’ read a statement from Lue.

‘I have had chest pains and other troubling symptoms, compounded by a loss of sleep, throughout the year,’ Lue continued. ‘Despite a battery of tests, there have been no conclusions as to what the exact issue is. 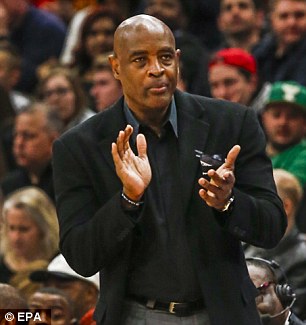 Cavs assistant Larry Drew will fill in for Lue. Drew previously coached the Atlanta Hawks and Milwaukee Bucks, so he has experience

‘While I have tried to work through it, the last thing I want is for it to affect the team. I am going to use this time to focus on a prescribed routine and medication, which has previously been difficult to start in the midst of a season. My goal is to come out of it a stronger and healthier version of myself so I can continue to lead this team to the Championship we are all working towards.’

James weighed in on the coach’s absence, the third time this season he’s missed all or part of a game, reportedly for the same reasons, and the effect on the team.

‘I mean he’s the captain of the ship, so absolutely,’ James said, per Cleveland.com. ‘We worry about his health, obviously. That’s way more important than this game of basketball. We know he’s been doing everything he needs to do to stay healthy – [Maybe he should] take even more measures to get himself right.

‘Everything that’s been going on with our year, it’s just another one.’

James also said the Cavaliers have become accustomed to the uncertainty.

‘[It] doesn’t catch us off guard because he’s been dealing with it for so long now,’ James said. 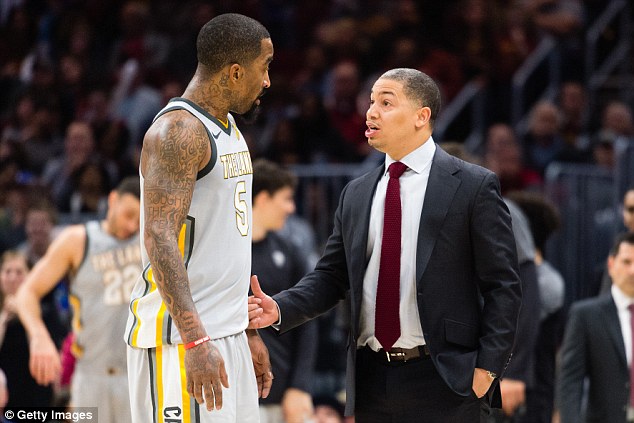 Altman, too, emphasized that Lue remains the unquestioned coach of the Cavs, who won their first title under the former NBA journeyman point guard in 2016.

With Saturday’s win, the Cavaliers finished up their road trip at 3-3.

They currently sit third in the East standings, but are just a half-game ahead of the Washington Wizards and Indiana Pacers.

The NBA Playoffs begin on April 14. 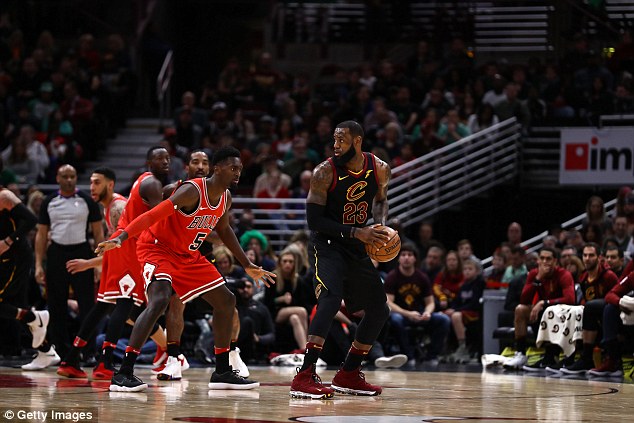 If LeBron James fails to secure a second title in Cleveland, he could opt out of his contract and pursue a new deal with a third NBA team. He previously won two titles in Miami as well