The US Navy has revealed that the spiked mine found floating on the surface of Washington’s Puget Sound was a remnant of a training exercise that took place 13 years ago.

The Navy said that the mine was a training object created for and used during a Naval Undersea Warfare Center-Keyport exercise in 2005, the Kitsap Sun reported.

The rusty device, which looked like a naval contact mine — typically placed underwater and used to damage ships and submarines in wartime — was first spotted floating on the Puget Sound surface, between Brownsville Marina and Bainbridge Island, Washington, on Tuesday at about 2pm.

When first spotted, the corrosion on the device led to some concern that the training mine might have been an actual explosive military device.

After the water surrounding the device was cordoned off by the US Coast Guard, the Navy sent in an explosive ordnance disposal team, which towed the mine back to nearby Port Orchard Bay.

Initial investigation of the device revealed that it had ‘decades of marine growth’ on it, according to a Navy news release.

The Navy then detonated the mine at 8.15pm, dramatic footage of which was caught by KIRO-TV. The news station reported at the time that the Navy said that the lack of a second explosion following the detonation indicated that the mine was not active.

The device was ultimately detonated ‘out of an abundance of caution,’ the Navy said.

A Naval Undersea Warfare Center-Keyport spokesperson confirmed Thursday that the training object device did not contain explosive materials and had been safe for public detonation. 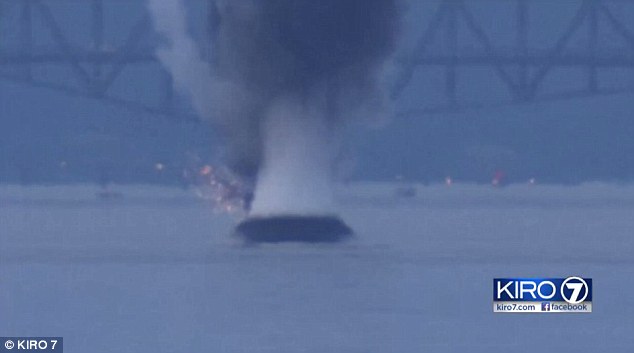 The Navy investigated the device and determine it was inert, but detonated it anyway 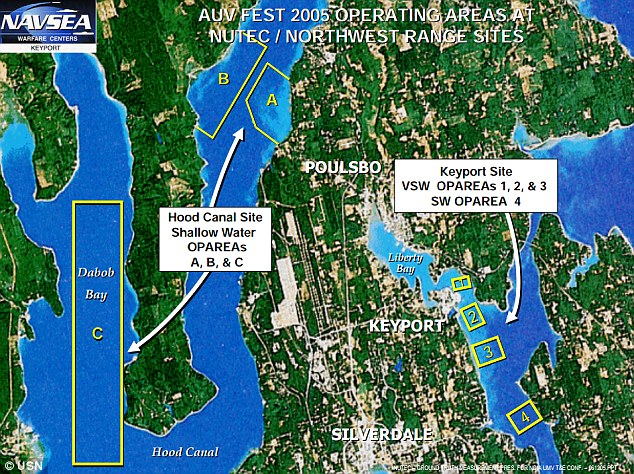 ‘Training objects, they’re made to look like a foreign mine. They themselves are not mines,’ the spokesperson told the Kitsap Sun. ‘They’re all inert. They don’t have any ordnance in them.’

The recently surfaced mine was said to be one of four, inert, mine-like devices which were anchored six feet above the seabed and used during the sixth annual Autonomous Underwater Vehicle Fest in 2005.

Various Navy commands, industry partners and academics participated in the festival, which was aimed at testing how capable the more than 40 unmanned, undersea vehicles and their technology were at detecting underwater objects.

The other three training mine devices had been recovered, the Naval Undersea Warfare Center-Keyport spokesperson said.

It’s been speculated that the steel cable and shackles which had been used to keep the device in place had corroded and broken after being underwater for the past 13 years, allowing the fourth mine to breach the surface.

Those objects — along with the mine that surfaced and was exploded — were left in place to be used in routine training exercises throughout the years.

However, the Navy has said that it is planning to survey those training minefield areas to locate and recover any objects that seem like they could become unmoored and resurface.