Mystery of ‘monster’ planet that should not exist

A ‘monster’ planet, which should in theory not exist, has been discovered orbiting a faint dwarf star far, far away, surprised astronomers have revealed.

The existence of the gassy giant challenges long-standing theories that such a big planet – about the size of Jupiter – cannot be formed around a star so small.

The star has a radius and mass about half that of the sun.

Artist’s impression of the planet NGTS-1b, the first to be found using the NGTS system at ESO’s Paranal Observatory. This planet is a hot Jupiter, at least as large as the Jupiter in the Solar System, but with around 20% less mass.

NGTS-1b is about 25 percent the radius its host star.

For comparison, Jupiter is only about 10 percent the radius of our sun

Theory had predicted that small stars can form rocky planets, ‘but do not gather enough material together to form Jupiter-sized planets,’ Britain’s Royal Astronomical Society said in a statement.

Planets are thought to form as gas and dust left over from massive galactic explosions, and swirling in disks around newborn stars, clump together to form bodies.

The project gave its name to the star – NGTS-1 – and dubbed the planet NGTS-1b. The ‘b’ signifies it is the first planet found around this star.

The survey uses an array of 12 telescopes to scour the sky and identify dips in light emitted by stars – a sign that a planet is moving in front of the star as perceived from Earth.

‘The discovery of NGTS-1b was a complete surprise to us — such massive planets were not thought to exist around such small stars,’ said Daniel Bayliss from the University of Warwick, a lead author of the study accepted for publication in the science journal Monthly Notices of the Royal Astronomical Society. 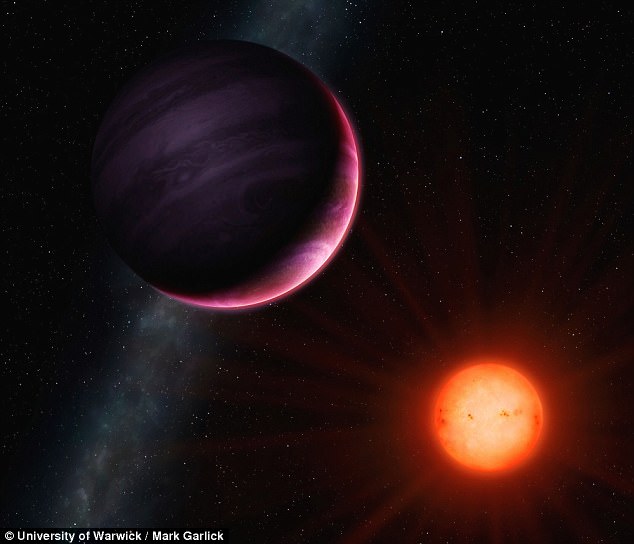 ‘The planet is about 25 percent the radius its host star.

‘This makes is very large compared to its host star! For comparison, Jupiter is only about 10 percent the radius of our sun,’ Bayliss told AFP.

Once they found it, astronomers measured how much the planet’s gravitational impact caused its parent star to ‘wobble’, so as to determine its size, position and mass.

HOW THEY FOUND IT

The NGTS uses an array of twelve 20-centimetre telescopes to search for the tiny dips in the brightness of a star caused when a planet in orbit around it passes in front of it (‘transits’) and blocks some of its light. 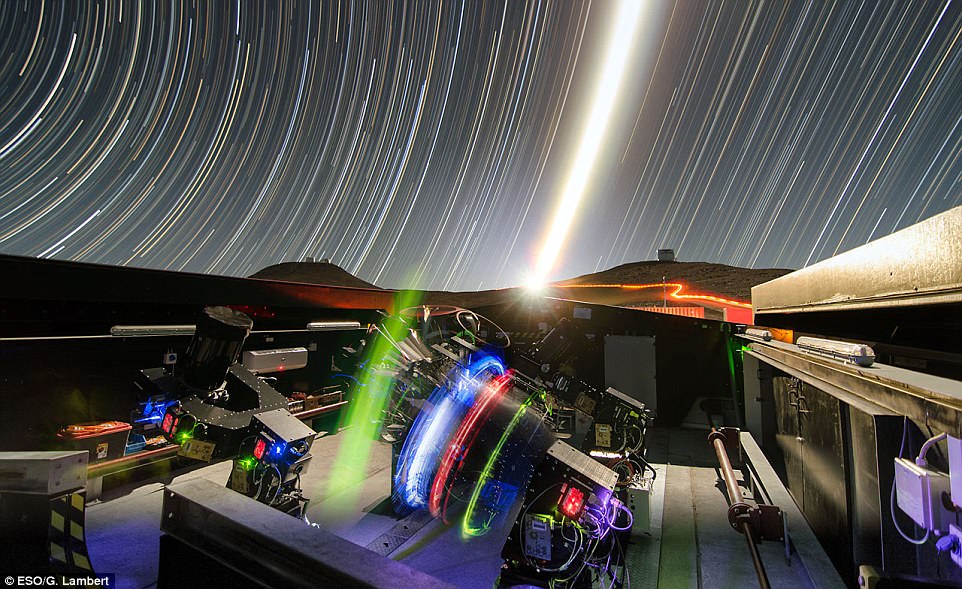 The Next-Generation Transit Survey is made up of an array of twelve 20cm telescopes, and will focus on discovering Neptune-sized and smaller planets, with diameters two and eight times that of Earth.

Once NGTS-1b had been discovered its existence was confirmed by follow-up observations at ESO’s La Silla Observatory: photometric observations with EulerCam on the 1.2-metre Swiss Leonhard Euler Telescope; and spectroscopic investigations with the HARPS instrument on ESO’s 3.6-metre telescope.

The planet orbited very close to its star, the team found – just three percent of the distance between the Earth and the sun, and completes an orbit every 2.6 days, ‘meaning a year on NGTS-1b lasts two and a half Earth days.’

The planet and star are about 600 light-years from Earth in a constellation called Columba.

‘Despite being a monster of a planet, NGTS-1b was difficult to find because its parent star is so small and faint,’ said Bayliss’s colleague Peter Wheatley.

The planet’s parent star is described as an M-dwarf — the most common type in the universe, which means there may be many more unpredicted giant gas planets to be found, the team said.

‘I’m looking forward to seeing what other kinds of exciting new planets we can turn up,’ Wheatley said.