The death of a Texas mother found dead last week has been ruled a suicide but authorities will not reveal if they believe that she killed her two daughters who were found murdered next to her in the $1million mansion where they lived with the mother’s boyfriend.

Nichol Olsen, 37, was found dead on Thursday along with her daughters London Bribiescas, 10, and Alexa Montez, 16.

They were found by Nichol’s 31-year-old boyfriend, Charles Wheeler, who told police he had returned home at 9am after spending the night elsewhere and found all three of them shot to death.

He lived with them in a $1million home he bought last year in a gated community in San Antonio, Texas.

Bexar County Sheriff Javier Salazar said at the time that the girls were undoubtedly victims of foul play but he could not confirm whether Nichol,a hairdresser, had also been murdered or if she had taken her own life.

On Monday, he revealed that the medical examiner had determined that Nichol killed herself but said his office is still investigating what happened.

It coincides with disbelief from Nichol’s many friends and relatives who have spoken out to say she would ‘never’ have harmed herself let alone the two girls. 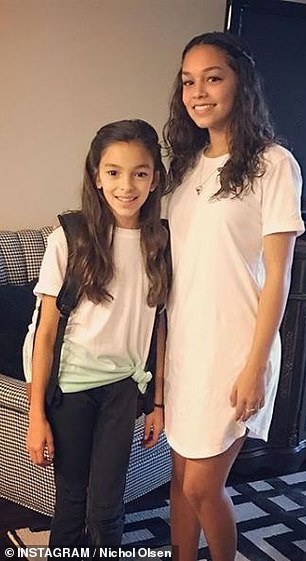 The medical examiner has ruled mother Nichol Olsen’s death a suicide despite friends, family and even the police casting doubt on the idea that she would take her own life. Her daughters London and Alexa, right, were murdered but police do not know who killed them and are hunting suspects. All three were found together in their home on Thursday morning 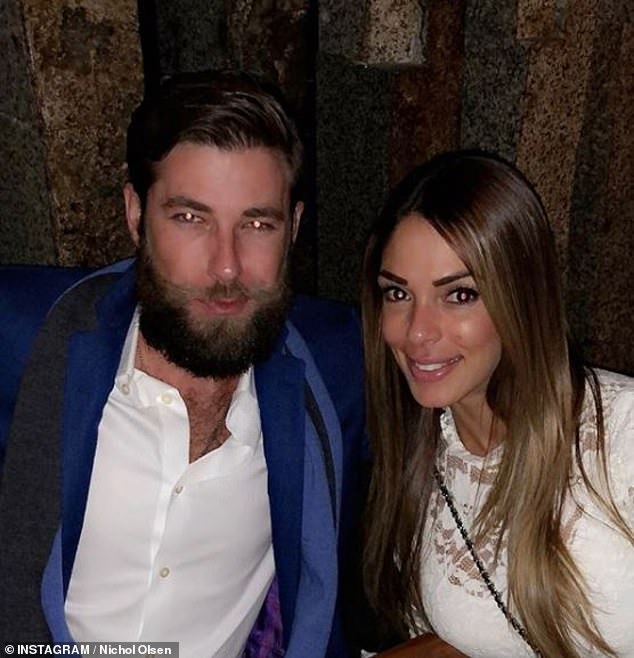 Nichol’s boyfriend Charles Wheeler, left, told police he returned to the $1million home where they lived at 9am and found the bodies. He has not been arrested and is being ‘extremely cooperative’

‘We owe it to the public, to continue this investigation and so we can’t just say well this is what the medical examiner says case closed.

‘The fact that Nichol Olsen’s death has been ruled a suicide, we can’t just say “well she must be the one who did this to these little girls.”

‘We have to go out and find out who it was that killed these two young ladies.

‘The evidence my leads us back to somebody in the house but it may not,’ Sheriff Salazar said.

Later, he said there were ‘way too many unanswered questions’ and that the department ‘absolutely’ had people they considered persons of interest – but he would not say who those people are.

‘This case is far from over,’ he said.

Police recovered a weapon from the house but they will not say who it belonged to.

As part of their probe, police are looking into cell phone usage and the towers they pinged from.

No one has been arrested for the killings and Bexar County Sheriff’s Office did not answer DailyMail.com’s multiple questions about the case on Monday morning. 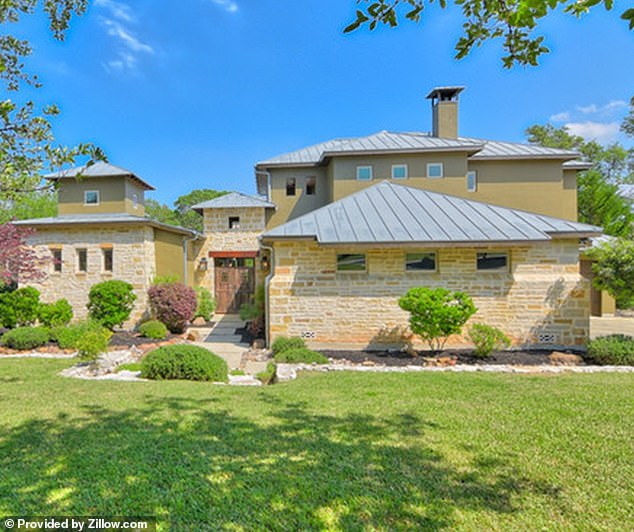 The bodies were found inside the $1million mansion Wheeler bought last year and where they all live. He told police he returned home, found the bodies and called 911 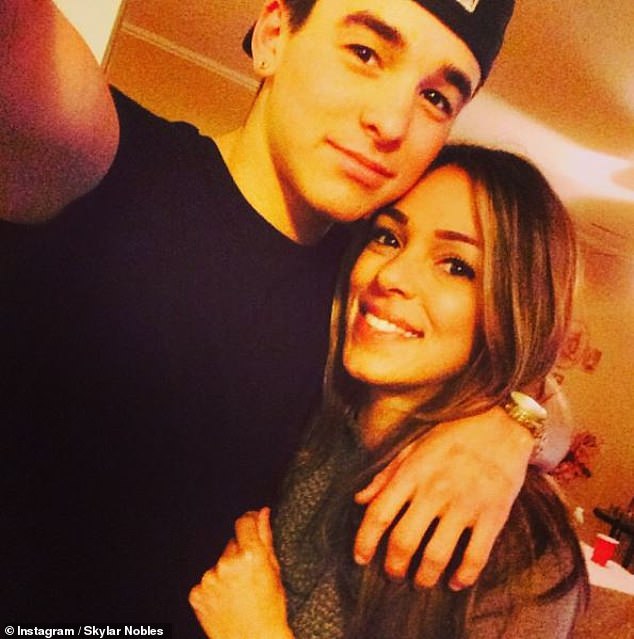 Nichol (pictured with her 22-year-old son Skylar who was not involved in the killings) has been described as a ‘fiercely protective’ mother and loving friend. It remains unclear what led up to her death or what made the medical examiner believe that she killed herself

Police will not say where Wheeler spent the night before he found the bodies.

Shortly after the bodies were found, authorities from the Bexar County Sheriff’s Homicide Division spoke with him but he has not been arrested nor has any evidence emerged to suggest he is responsible. 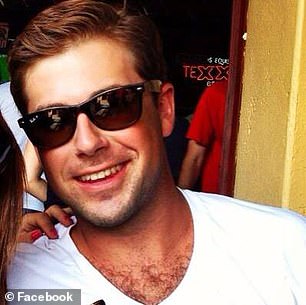 His Ford 2013 pick-up truck was seen being removed from the street but there have not been any other developments.

He did not immediately respond to DailyMail.com’s inquiries on Monday morning but police say he has been cooperative throughout the investigation.

‘[He] has been very cooperative from the onset. Understandably, he’s upset.

‘He has someone he was in an intimate relationship with and two children that by all accounts he cared for [who] have all passed in a very violent fashion.

‘I can tell you with regard to the information that we have that he was at another location, we’re still investigating that,’ Sheriff Salazar said.

Now, friends of the mother-of-three tell DailyMail.com that she too must have been killed and her grieving relatives are begging for answers.

‘Nichol was a loving mother who cared deeply for her children.

‘They were her entire world, and there was nothing she was more proud of than her kids. 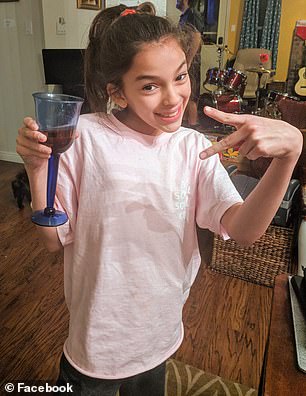 London (shown left on New Year’s Eve) and Alexa have different fathers. Alexa’s father said her death had destroyed his life. London’s father is yet to comment

‘Everyone close to Nichol knows that she put her children above all, loved them with all her heart, and there’s no possible way Nichol would ever hurt her children,’ the friend, who wished to remain anonymous, said.

They added that she was preparing to enter London, who was in the fifth grade, in America’s Got Talent when they were both killed.

‘Nichol was a very caring woman, had so much love in her heart, and too much to live for to ever hurt anyone including herself.

‘We pray that whoever did this will be brought to justice soon,’ they said.

Others, including Alexa’s grieving father, have told how she was a loving mother who would never have brought harm to her children.

One friend said: ‘She was an amazing mother who guarded her children like a hawk. 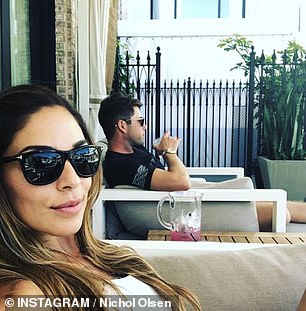 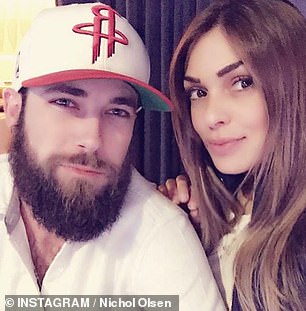 The couple, shown above during a recent trip to San Diego, appeared happy on social media.  Wheeler owns an oil rigging and maintenance business

‘There was nothing she wouldn’t of done for her children…I hope we get justice very soon for this horrible crime & they catch this monster who took life from you and your beautiful girls.’

Another wrote on Facebook: ‘She was so beautiful. She would never hurt herself or her girls. Domestic violence is real.’

Carlos Montez, Nichol’s estranged husband, said they had a good relationship for the sake of their daughter.

‘I remember the day I met Nichol Olsen. We were both so young that we rushed into marriage thinking we had it all figured out.

‘…We tried as best we could to keep things together but life gets messy every now and then.

‘Through our differences and divorce we both agreed on what was best for our daughter. Nothing ever changed from then on.

‘My mother and sister loved Nichol and she never kept Alexa from us and vice versa.

‘We always did what was best for our baby,’ he said.

Before their marriage, she was briefly married to James William Nobles. The pair have 22-year-old son together.

She did not marry London’s father, Hector Bribiescas. He has not commented publicly since his daughter’s death.