N-Dubz rapper Dappy’s former partner is engaged to a triple-murderer she has never met.

Kaye Vassell, the mother to two of the singer’s children, has moved to Missouri to be closer to new beau Deandra Buchanan, as reported by The Sun.

The 29-year-old, from Hammersmith, West London, has even started campaigning for the release of Buchanan who was jailed for life after shooting and killing his stepfather, aunt and girlfriend at a party in November 2000.

The murderer has appeared in Netflix true crime series I Am A Killer and has claimed he was in a paranoid rage due to ‘spiked’ drugs.

Kaye Vassell with Dappy, and one of their children, pictured in April 2010

His girlfriend, Angela Brown, was holding his five-month old baby when he shot her in the back. The couple also had another child together.

Miss Vassell, who contacted the murdered two months ago, has left her two children she has with Dappy, who are aged 9 and 10, in the UK.

She has written to Buchanan who is currently at Jefferson City Correctional Centre.

Miss Vassell told the newspaper:  ‘I was just intrigued by the story. I didn’t expect it, but he got back straight away.

‘It was five or six letters before I gave him my number. We speak on the phone up to three times a day.

Deandra Buchanan was jailed for life after shooting and killing his stepfather, aunt and girlfriend at a party in November 2000

‘I get how people might think, ‘She’s crazy, what is she doing?’ But once you talk to him and know his heart, you understand that he is not a bad person.’ 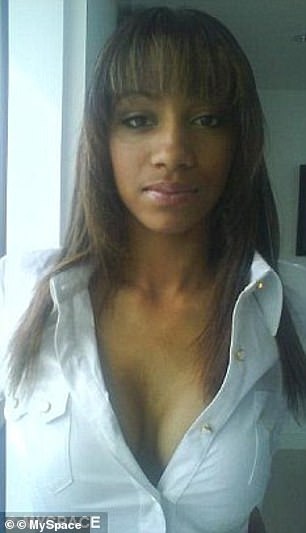 Kaye Vassell has started campaigning for the murderer’s release

It comes a few months after N-Dubz star Dappy attacked one of his fans by direct messaging her to brand her a ‘fat ugly pig’, a ‘tramp’ and a ‘b***h’.

This, however, prompted Dappy – real name Costadinos Contostavlos – to slide into Jade’s DMs and launch into a bizarre attack on her, demanding she ‘stop taunting him’ and pelting her with unkind remarks.

A month prior to that he sent another recorded message to a fan who also told him his music is her ‘guilty pleasure’.

The fan was Ellana Prior, 21, and he ranted to her in the voice note: ‘Do you know what guilty pleasure means you little b***h? It means something that you like that you’re embarrassed about.

‘I don’t make music for it to be called that, do you understand? So f*** off man, you stupid little cow man.’

The fan sent the message to Dappy back in September last year but he only replied in January, two days before Splash was released.