Nadine Dorries to tell BBC: Your Leftie days are numbered

Nadine Dorries to tell BBC: Your Leftie days are numbered following rows over the impartiality of journalists

New Culture Secretary Nadine Dorries will use her speech to the Tory Party conference to throw down the gauntlet to the BBC following rows over the impartiality of its journalists.

Sources said Ms Dorries, who was promoted to the Cabinet in Boris Johnson’s reshuffle last month, hoped to use the speech to tell the corporation ‘what was expected of it if it wanted to keep the licence fee’.

The Mid-Bedfordshire MP, a best-selling novelist who appeared on ITV’s I’m A Celebrity…, has previously described the BBC as a ‘Left-wing’, ‘hypocritical’ and ‘patronising’ organisation which had too many ‘dull, boring, male and ageing wig-wearing men’ on presenting duties.

A source said: ‘The plan is to put the BBC on notice that its days as the voice of the Islington Left are numbered.

Sources said Nadine Dorries, who was promoted to the Cabinet in Boris Johnson’s reshuffle last month, hoped to use her Tory conference speech to tell the BBC ‘what was expected of it’

‘Nadine appreciates that it has a global reputation for the quality of many of its programmes, but the woke-infested news output needs addressing.’

The BBC, which receives £3.52 billion a year from the licence fee, reacted with dismay to Ms Dorries’s appointment after it emerged she had once described state-run television as ‘more in keeping with a Soviet-style country’, and backed a campaign to decriminalise non-payment of the licence fee.

The Corporation’s Royal Charter is due for renewal in 2027.

As recently as last year, when she was outside the Cabinet as a Health Minister, Ms Dorries said: ‘The BBC favours strident, very Left-wing, often hypocritical and frequently patronising views that turn people away.’

BBC director-general Tim Davie was drawn into a row over the appointment of Jess Brammar to a senior role in BBC News, despite her having posted tweets critical of Brexit and the Government in the past – after Mr Davie claimed to have made ‘some progress’ in delivering impartiality since he arrived a year ago. 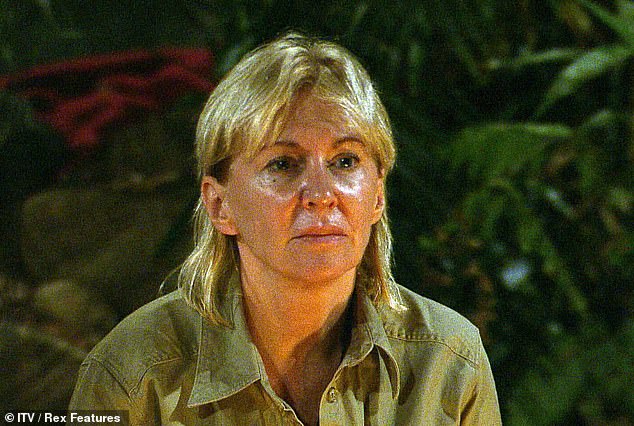 The Mid-Bedfordshire MP, who appeared on ITV’s I’m A Celebrity… (pictured in 2012), has previously described the BBC as a ‘Left-wing’, ‘hypocritical’ and ‘patronising’ organisation

Ms Brammar’s appointment was defended by a virulent collection of Left-leaning activists on Twitter who said her opponents were ‘misogynistic’.

Mr Davie defended the appointment by saying he thought the BBC would be ‘in dangerous territory if previous political positions, tweets, goodness knows what else, rule you out from BBC jobs’.

When Ms Dorries was appointed, Defence Secretary Ben Wallace said: ‘What’s great about Nadine Dorries is that she produces culture that people buy and actually want to see, rather than some of the more crackpot schemes we’ve seen being funded in the past by taxpayers’ money. I think she’ll bring realism to it.’

Ms Dorries is the tenth culture secretary to have been appointed in just a decade, a rate of turnover which has dismayed BBC executives.

Mr Davie says that while he expected a ‘bit of theatre’ from Ms Dorries, he hoped they could have a ‘really serious, grown-up dialogue’.

‘There’s some good quality people in government and we’ll have constructive conversations,’ he said.