Nadiya Hussain has revealed that her first ever spa day left her feeling ‘self-conscious’ about wearing modest swimwear.

The 2015 Bake Off star, 33, who’s just enjoyed her own cookery show airing on BBC2, said what should be a relaxing treat was fraught with minor worries about how their Islamic bathing suits would be perceived by fellow spa-goers.

Sharing a photo to her 159,000 Instagram followers of herself and two female family members enjoying aday at Champneys Spa in Tring, Hertfordshire, the mother-of-three said ‘we’re all too aware that we looked different.’

The television star shared a photo of herself enjoying a spa day at Champneys in Hertfordshire; Nadiya, 33, pictured with two family members on her day out, revealed that she felt ‘self-conscious’ and apprehensive about her modest swimwear ahead of the treat 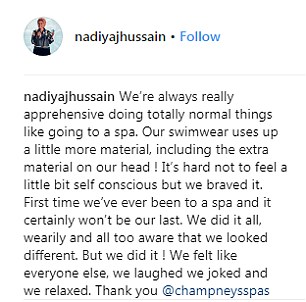 ‘Our swimwear uses up a little more material, including the extra material on our head ! It’s hard not to feel a little bit self conscious but we braved it.’

Hussain, who has now written several cookery books, added: ‘First time we’ve ever been to a spa and it certainly won’t be our last.

‘We did it all, wearily and all too aware that we looked different.

‘But we did it! We felt like everyone else, we laughed we joked and we relaxed.’

She added the hashtag, #wereallthesame. Many of her fans posted words of encouragement in response.

Tracycowan01 wrote: ‘We are all women… No matter of our culture…. You are a good role model to all.’

Tessfoy82 agreed, saying: ‘I’m sad you felt this way Nadia but glad you had a great time. It hurts my heart to think we live in such a judgmental society.’ 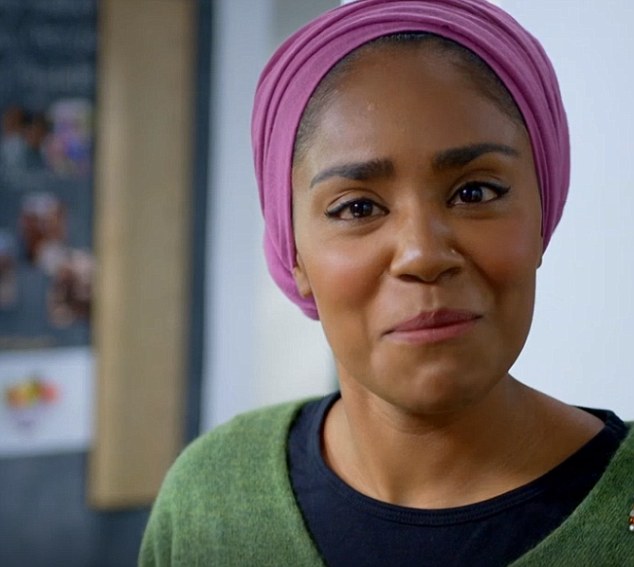 ‘We were all too aware that we looked different’: Nadiya’s huge fanbase on Instagram praised her decision to post the photo of herself at the spa and reassured her that she should enjoy the the day and not worry about what she was wearing

Claireybell100 wrote: ‘Paving the way @nadiyajhussain I’d like to see more diversity in spas like this. I bet you all rocked your outfits. I hope you left feeling pampered and confident. And full!’

Nita.patel1905 penned ‘It’s good to be different! Don’t follow anyone be the one that people want to follow!’

Earlier this month, the mother of three, who is originally from Luton and is of Bangladeshi descent, said she had no desire to be a role model after winning Bake Off, but has learned that her presence helps pave the way for others like her.

She told The Guardian: ‘After Bake Off I just wanted to bake, I had no intention of being a role model or a representative. 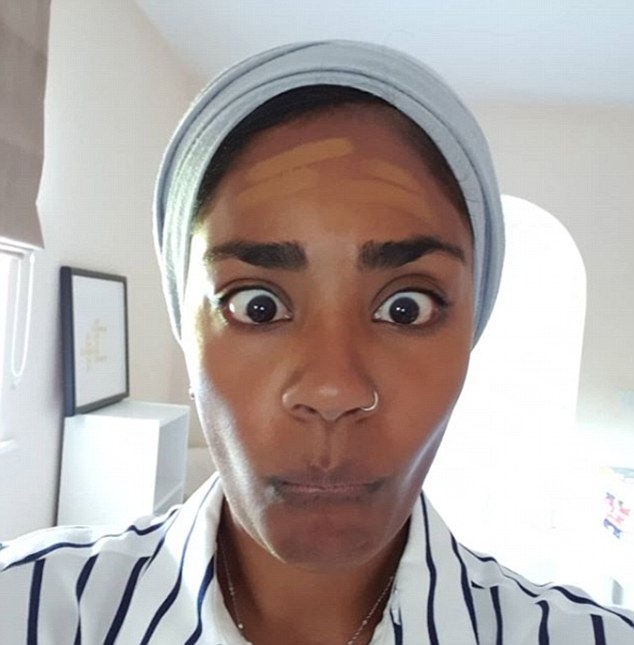 Last month, Nadiya revealed that she used to ‘hate being brown’ as a teenager and would stay out of the sun for fear of her skin getting darker

The television cook has enjoyed more success with her own show, Nadiya’s Family Favourites, which sees the Bake Off winner cooking recipes for her family including husband Abdal 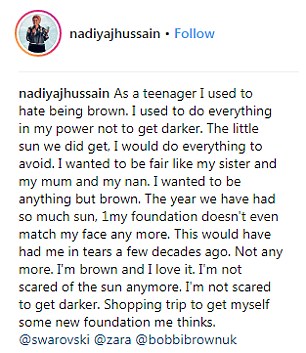 ‘Why did it matter that I’m brown, a woman and Muslim?

‘But now I understand – I need to be here, and it’s important for me to stay: to make space for people like me in this industry.’

Ahead of her own show starting on BBC2 last month, Nadiya revealed she  ‘wanted to be anything but brown’ in her younger years.

Posting alongside a photo of her face recently tanned in the UK summer heatwave, she said her usual foundation currently doesn’t match her skin, something she would have feared in the past.

Hussain wrote: ‘As a teenager I used to hate being brown. I used to do everything in my power not to get darker. The little sun we did get, I would do everything to avoid.’

She said she dreamed of having lighter skin like her sister, mother and grandmother.

Comparing how she feels about her skin colour now, Nadiya said: ‘The year we have had so much sun, my foundation doesn’t even match my face any more. This would have had me in tears a few decades ago. Not any more. I’m brown and I love it. 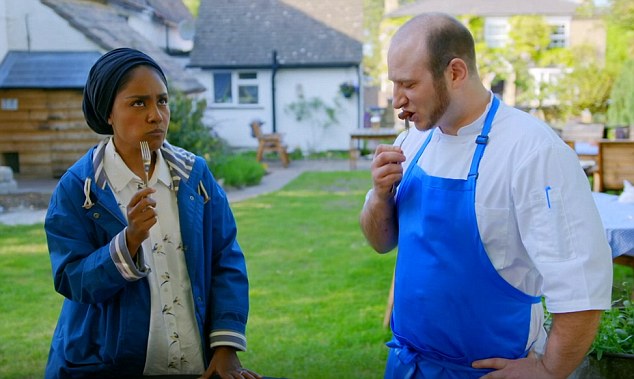 The first episode of Nadiya’s Family Favourites saw her visiting the amateur cornish pasty-making champion and trying to differentiate between sunflower, olive and rapeseed oils (pictured above)

While Nadiya has hosted other shows for the BBC, fronting her own cookery programme seems to have seen her strike television gold, with viewers and critics, including the Mail’s Christopher Stevens, declaring the first episode a hit.

The 33-year-old has consistently addressed racist trolls on social media and slammed down one when they asked her yesterday why she thought she had her own show.

While the troll’s original tweet has now been deleted, Nadiya replied: ‘Would you ask the same question if I was a middle aged, middle class, white man?

‘Why do you think I have my own series etc? I’m sure you have your own theories and I can guess exactly what they are. There is enough room for all of us, stop speculating and just accept it.’

The food also did the talking in the first half-hour episode, with chai spiced vermicelli, samosa pie and a prawn biriyani all going down well with viewers. 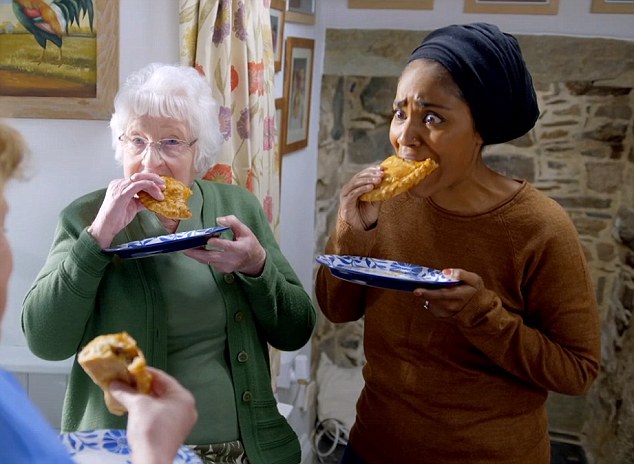 The mother-of-three, who recently revealed she only eats one meal a day when not working to avoid piling on the pounds after spending hours in the kitchen, pictured trying Cornish pasties during the first episode of her new show

@iamstg64 wrote: ‘Confession time Nadiya, have never had a samosa in my life! But I am going to give the samosa pie a go, looked absolutely gorgeous.’

@Berryliz8 added: ‘Definitely going to try that Samosa Pie, everything we like wrapped up in gorgeous pastry. Yummy.’

Despite the pastry-laden recipe, the Great British Bake Off champion recently revealed that she only allows herself to eat one meal a day at 5pm – as well as going for a daily five kilometre (3.1 mile) jog.

The star says it’s how she keeps her weight under control in between filming her cooking shows.

She will drink tea, coffee and eat fruit, but otherwise will just have one meal with her children at 5pm each day when not working.