Munchetty repeatedly challenged Mr Zahawi over a swathe of people ‘excluded’ from the extraordinary packages announced by the government.

Chancellor Rishi Sunak announced yesterday that 80 per cent furlough is being extended to the end of March, after England was plunged into a new national lockdown.

A separate scheme for the self-employed will also hand out grants of 80 per cent of previous profits between this month and January – double the level previously on offer.

However, a sizeable chunk of those who are self-employed, ranging from those who have earned more than £50,000 to freelancers and first-time entrepreneurs, are not elligible.

Limited company directors who employ themselves through their own firm – something often demanded by clients – are also not covered.

Whilst it is a grey area if limited company directors are technically self-employed, they have made up an increasing element of the UK’s self-employed workforce in recent years. 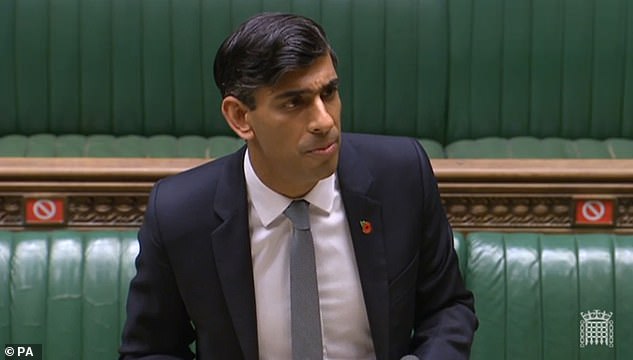 Chancellor Rishi Sunak announced yesterday that the furlough scheme is being extended to March, and bolstered support for the self-employed

Some have been able to furlough themselves but have found their income drop substantially as they paid themselves through dividends – a tax move that is legally allowed.

How much more cash has Rishi splashed?

Rishi Sunak has confirmed that the furlough scheme will be extended until the end of March, with employers only having to contribute national insurance and pension costs.

The Bank of England has estimated that 5.5million people could be placed on furlough.

As the Treasury has pencilled in costs of a billion pounds a month for every billion workers on the scheme, that would suggest a bill of £5,5billion a month – or £27.5billion to the end of March.

The Resolution Foundation think-tank says the monthly cost could be even higher at £6.2billion a month – implying a total of £31billion.

Grants for the self-employed are being increased from 40 per cent of average previous profits to 80 per cent between November and January.

The Treasury says the grants are expected to cost £7.3billion over that period – with another round to come between February and April.

Up front funding for the devolved administrations will increase by £2billion, calculated based on central government spending.

Mr Sunak said the scheme offering a £1,000 bonus for firms who bring back furloughed workers beyond February will ‘fall away’ because of his other announcements.

That could potentially save the Treasury £8billion. However, Mr Sunak promised that another scheme will take its place later.

During an interview with Mr Zahawi this morning, Munchetty pointed out that many such people could be without income for a year due to the draconian coronavirus curbs.

‘They are called the excluded. What are you going to do about them?’ she demanded.

Mr Zahawi, himself a multimillionaire entrepreneur, insisted that small business owners could access the support if they paid themselves salaries rather than dividends.

‘They have clearly had a really difficult time, and I completely understand that. But we have also put £9billion into the welfare system to try and help those people who have found it very difficult to get any other income over and above the dividends,’ he said.

‘Of course they can pay themselves some wages, and if they are paying themselves wages they are able to take the furlough scheme.’

But Munchetty broke in: ‘They are not working, they are not earning. What are they going to pay themselves wages from?’

She went on: ‘The money only lasts for so long. You know as well as I do that if you have a business, a small business, you’re self-employed, you live from months to month.

‘Everyday people don’t have a year’s worth of money ready to top up their income in case they lose it.’

When presented with figures that 2.9million workers had ‘dropped through the cracks’ and were not getting the support they needed, Mr Zahawi again stressed that most self-employed would be entitled to grants.

‘The people who have taken dividends because they don’t take a salary from their business, my estimate is about 600,000-700,000 people who are in that category,’ he said.

‘We have put £9billion in the welfare system to help people get through this period. It is tough… We can’t save every job.’

Mr Zahawi also said he was not going to be ‘presumptuous’ when asked whether the extension of the furlough scheme to March indicated more lockdowns could be on the way.

He told BBC Breakfast: ‘This intervention (the four-week England lockdown) will end on December 2. We will then review how well it is working. I think there are some good signs, early, cautious but good signs. 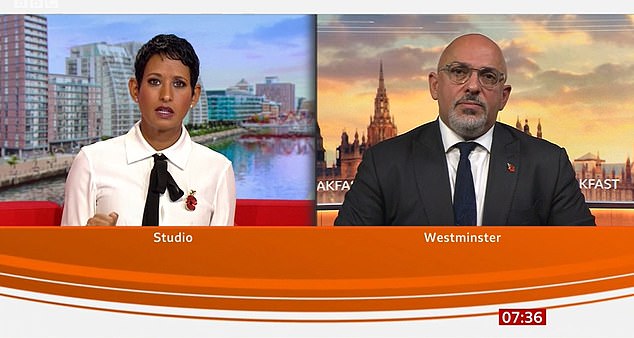 ‘If you look at the regions that moved into Tier 3 – Liverpool, for example, the case rates have fallen by 50 per cent between the time they moved into Tier 3, and this extra intervention was introduced. Nottingham (has) fallen by 60%.

‘So I think that if we all come together, do the right thing over the next four weeks, we can bring the R number down to 1 or below and go back to a tier system.

‘But of course, you know, I’m not going to be presumptuous in any way, I will come back on your programme.

‘The Prime Minister will come back to Parliament and look at the data, review the data, demonstrate hopefully that it has worked and then we can move back to a tiered system.’