A female tourist has sparked anger on a holiday island in Thailand, after ‘disrespecting’ a sacred rock shaped like a penis.

The blonde woman was seen undressing next to the the Hin Ta – or Grandfather Rock – on the island of Koh Samui yesterday.

She was photographed rubbing herself herself against the 12ft high sacred rock – which locals believe is imbued with the spirit of an old man.

Disrespect: The unidentified blonde woman was seen stripping naked and rubbing herself against a 12ft rock shaped like a penis which is sacred to the people of Koh Samui, Thailand

Furious residents are now demanding that police arrest the unidentified woman and make her publicly apologise for her disrespect.

Food seller Sutida Wongyai said: ‘The rock is very special and represent our island. It is an insult to do this to it.’

‘The police need to find her and prosecute her. It will warn other people not to disrespect the island.’

Resident Niwin Suksan, 34, who runs a stall near the stone, added: ‘I felt very uncomfortable after seeing the picture. I want the police to take appropriate action to avoid this happening again. The grandfather rock has a long history and the people of Samui are proud of it.’ 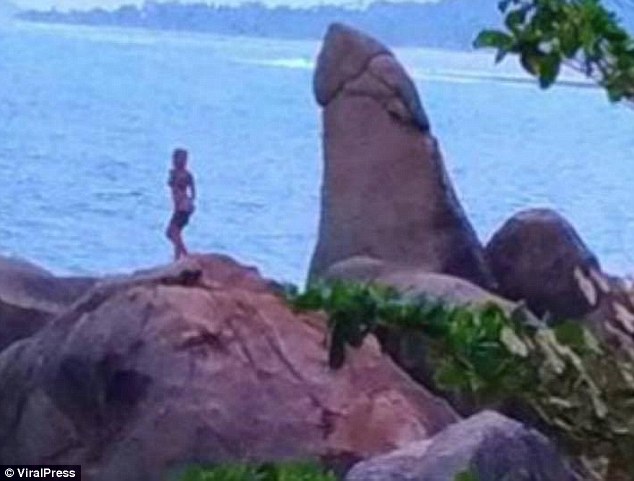 Caught out: The young woman appears to me looking at someone behind her as she undresses by the 12ft tall rock 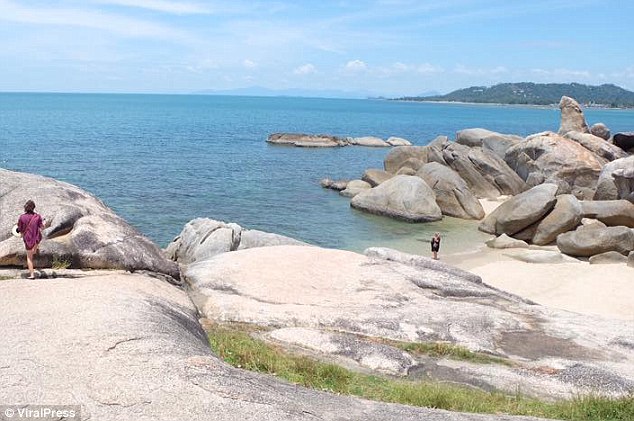 Sacred: The Hin Ta rock, seen far right, is considered sacred by the residents of Koh Samui, and many are now demanding that the woman is arrested and made to apologise

The Hin Ta rock, a tourist attraction in the island, is found next to a smaller Hin Yai rock – the first resembles the male genitalia and the second female. 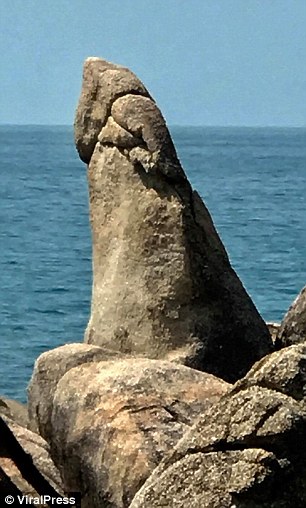 Spiritual: Locals believe Hin Ta, which translates to ‘Grandfather Rock’ is imbued with the spirit of an old man

Locals believe that an elderly couple sailed to the island to propose a marriage for their son but their boat was capsized in a storm causing them to lose their dowry.

Fearing the shame of turning up penniless, they are said to have leapt into the sea, before being reborn as two male and female rocks on the island.

Despite warning signs on the beach, the unfortunate phallic shape of the rock regularly attracts pranksters who cause offence by climbing on it or posing next to it.

In August 2016 local authorities launched an unsuccessful manhunt for a tourist who went rock climbing on rock the posing on top of it. While in February a model sparked anger with a cheeky photo in front of the landmark.

Police on the island today confirmed they had received a complaint about the naked tourist and were investigating.

A spokesman said: ‘This is not acceptable and officers will investigate the images and try to find the woman.’