Nana Mouskouri  on Adele, Amy Winehouse and and Bob Dylan

Move over Madonna, step aside Adele. In global terms, Greek singer Nana Mouskouri may well be the best-selling female recording artist of all time.

Universal Music Group, which owns almost all the labels under which Mouskouri has recorded, claims she has sold close to 350 million albums worldwide, more units than Madonna’s estimated 300 million. ‘Many people have bought my records all over the world,’ the bespectacled superstar, currently in the middle of a global tour, acknowledges modestly. ‘But I don’t feel as if I’m in competition with anybody.’

The precise figures are hard to verify as the multilingual chanteuse has made more than 200 albums in ten languages, including Mandarin, Hebrew, Japanese, even Welsh, securing sales in the furthest-flung corners of the planet.

She was an international name when Madonna was still, like, a virgin. Asked if she is a Madonna fan, Mouskouri laughs airily and says she likes a lot of modern music, particularly ‘Adele’s wonderful voice’.

During the Seventies, it was a struggle to find a British home that didn’t own a Nana LP. Her 1969 album, Over And Over, stayed in the UK charts for almost two years. The single The White Rose Of Athens sold more than a million vinyl copies. At home in Geneva, where she has lived for over 50 years, Mouskouri is in a light-hearted mood. She has a voice like a meadowlark and the demeanour of a slightly naughty nun, and exudes a youthful exuberance, belying her 83 years. ‘Love is all that matters’ becomes her familiar refrain this morning.

Mouskouri has been married to French record producer Andre Chapelle since 2003. Her first marriage, from which she had two children, ended in 1975.

She fronted the popular BBC show Presenting Nana Mouskouri from 1968 to 1976, her thick-framed glasses, shy drapes of dark hair and floating cheesecloth tops making her easy prey for impressionists. Ronnie Barker gave us his ‘Nana Moussaka’. Not that the subject was remotely offended. ‘I didn’t mind at all,’ Mouskouri croons. ‘The Two Ronnies were such witty and clever men. 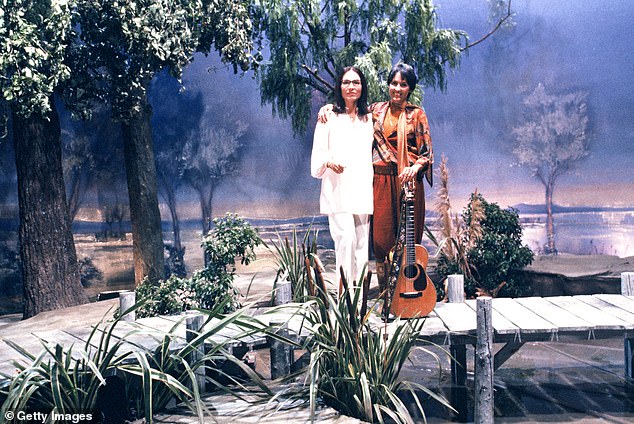 Mouskouri with Joan Baez. Mouskouri suffers from a throat condition where one vocal cord is thicker than the other and this has created a tenderness in her singing

Even Dame Edna Everage had Mouskouri on the chat-show sofa, referring to her as ‘a talented little Greek hippy’ and delivering a high-risk gag about the German occupation of Greece, a deeply traumatic period Mouskouri lived through as a child. ‘Some of the Greek islands are still occupied by the Germans,’ Dame Edna informed her slightly stunned guest, referring to more recent towel-wielding tourists. ‘She also said, “I love your face furniture,” ’ Mouskouri hoots. ‘I’d never heard that expression before.’

In 1978, Bob Dylan declared her to be one of his two favourite singers. ‘I was touched profoundly by that,’ she says. In 1979 Dylan presented her with a demo of his song Every Grain Of Sand, and asked her to record it.

‘Leonard Cohen then took me to see Dylan,’ she recalls. Cohen died in 2016 and Mouskouri still sings Hallelujah live in his honour. ‘He made me laugh so much,’ she says. ‘We stayed friends until the end.’

Dylan, it turns out, still keeps in touch. ‘Every now and then I get a few words from him on the email,’ she reveals.

This year Mouskouri has returned the favour with her Forever Young album and tour named after another Dylan song. She recently covered Amy Winehouse’s Love Is A Losing Game. ‘I felt I had to sing that song,’ she says. ‘Amy went too young, you could hear the hurt she was feeling, like Billie Holiday, but she had a beautiful voice.’

Mouskouri’s own voice is just as unique. She suffers from a throat condition where one vocal cord is thicker than the other and this has created a tenderness in her singing. ‘There has been sadness in my life, the war,’ she says softly. ‘That leaves a certain pain, perhaps people hear that in my voice.’ 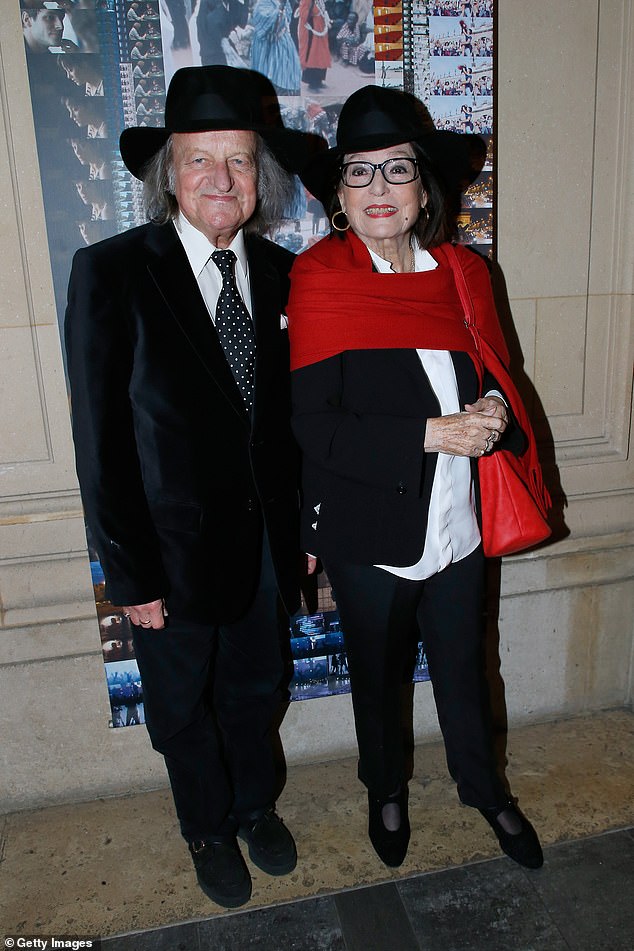 Mouskouri and husband Andre. Universal Music Group, which owns almost all the labels under which Mouskouri has recorded, claims she has sold close to 350 million albums worldwide

People also see an iconic pair of specs. ‘They say I look like a bad teacher, or a mean secretary. But it’s not me, it’s just the glasses.’

Mouskouri has ‘hundreds of pairs, all over the house. I’m always losing them. That makes me sound old’, she shrugs, but she is far from an ancient Greek. ‘I’m young in my heart. I know I’m not 20 any more, I have to remind myself of that sometimes, but I feel ageless.’

She misses her friend and countryman Demis Roussos, who died in 2015 aged 68. ‘He was such a communicative man with an extraordinary voice, almost like a girl’s!’

Still, she is philosophical about the final curtain. ‘When my moment comes, it will come,’ she sighs sweetly. ‘Let it be, just like The Beatles say.’