House Speaker Nancy Pelosi called President Trump on Friday night and asked him to delay the planned deportation of thousands of illegal immigrants scheduled for Sunday, it has been reported.

The president on Saturday announced that he would delay the Immigration and Customs Enforcement deportation raids by two weeks during which he and the Democrats will try to hammer out a negotiated agreement on the contentious issue of undocumented migrants.

A source familiar with the matter told CNN on Saturday that Trump and Pelosi spoke by telephone in a conversation that lasted 12 minutes.

Pelosi publicly urged Trump to hold off on the planned raids, which she called ‘heartless.’ 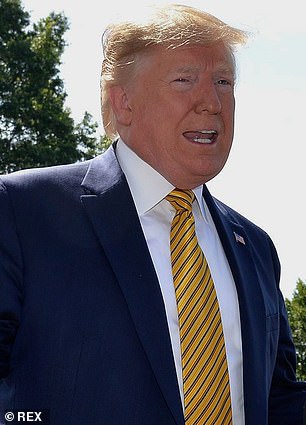 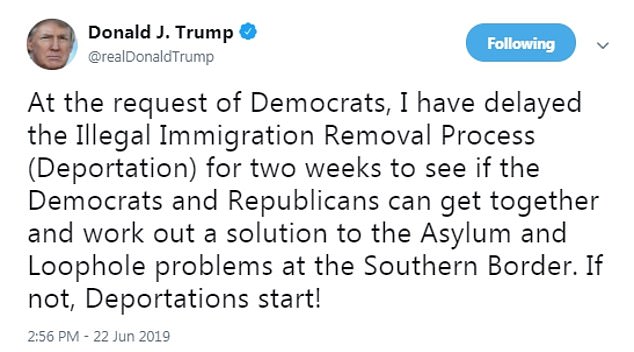 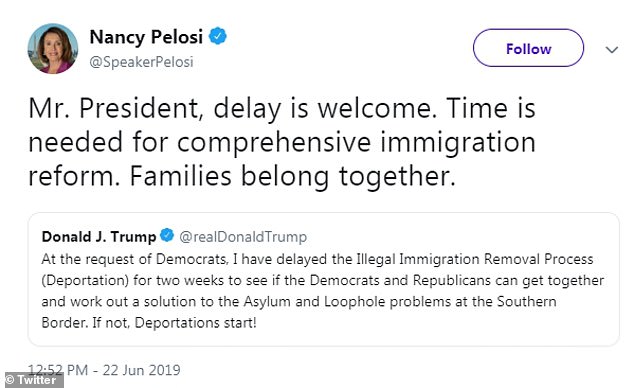 ‘It is my hope that before Sunday, leaders of the faith-based community and other organizations that respect the dignity and worth of people will call upon the President to stop this brutal action which will tear families apart and inject terror into our communities,’ the California Democrat said in a statement on Saturday.

‘Families belong together. These families are hard-working members of our communities and our country.

‘The president’s action makes no distinction between a status violation and committing a serious crime.

‘It is important that the President and our immigrant communities know that they have rights in America.’

Trump has said that the planned enforcement actions by ICE are aimed at removing thousands of illegal immigrants who have court orders for deportation. 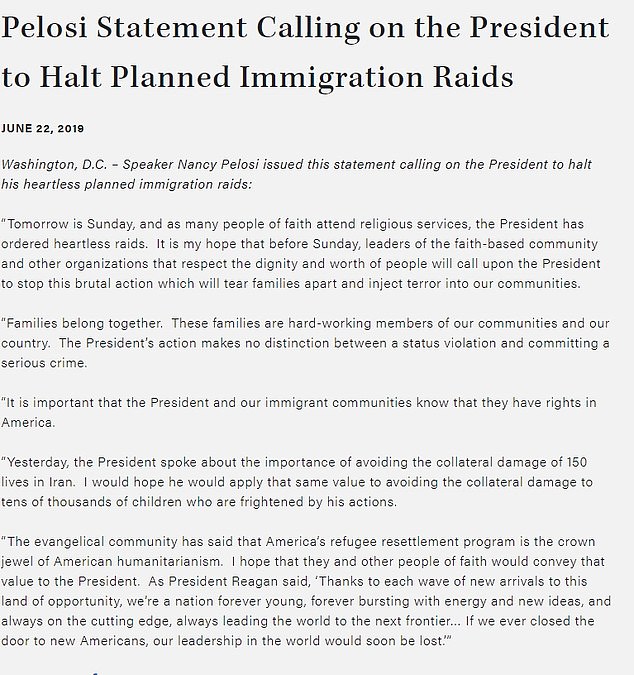 Pelosi publicly urged Trump to hold off on the planned raids, which she called ‘heartless’

‘At the request of Democrats, I have delayed the Illegal Immigration Removal Process (Deportation) for two weeks to see if the Democrats and Republicans can get together and work out a solution to the Asylum and Loophole problems at the Southern Border. If not, Deportations start!’ Trump said in a tweet on Saturday afternoon.

Enforcement raids had been scheduled to begin at dawn on Sunday in at least 10 major cities, drawing furious protests from local Democrat officials who vowed to fight the deportations.

Trump had been adamant that the raids would go forward as recently as Saturday morning, and his stunning reversal on the ICE raids comes amid a tumultuous week in which it was revealed that he pulled back on a planned strike against Iran at the last minute after learning the casualty projections.

In announcing the delay, Trump gave Congress an ultimatum to fix ‘loopholes’ in the asylum process, likely referring to the patchwork of legal restrictions which allow many Central Americans to cross the border illegally and quickly walk free if they arrive with a child.

Just hours earlier, Trump had been adamant that the enforcement action would move forward – even insisting that it would have a deterrent effect that would help the situation at the border, where illegal crossings have skyrocketed.

‘Everybody that came into the country illegally will be brought out of the country, very legally,’ he continued.

‘Some cities are going to fight it, but if you notice they’re generally high crime cities. If you look at Chicago… many of those cities are sanctuary cities and they’re high-crime cities,’ Trump said, referring to vows from several Democratic mayors to fight the enforcement action.

Trump said the enforcement action would have ‘a very big effect on the border’ and deter further illegal immigration. 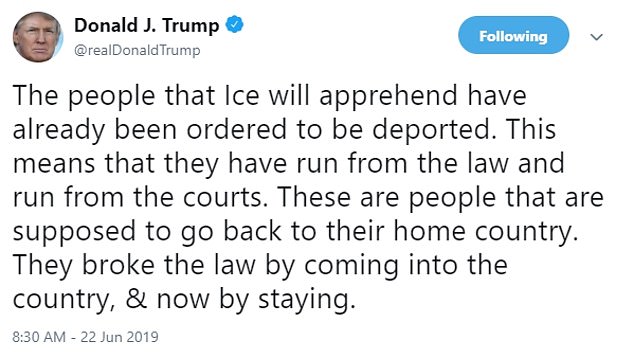 Earlier Saturday morning, he tweeted: ‘The people that Ice will apprehend have already been ordered to be deported. This means that they have run from the law and run from the courts.’

‘These are people that are supposed to go back to their home country. They broke the law by coming into the country, & now by staying,’ he wrote.

‘When people come into our Country illegally, they will be DEPORTED!’ Trump continued.

Cities that were to be targeted in the raid included New York, Los Angeles, San Francisco, Chicago and Houston – all Democratic controlled and many of which forbid local law enforcement from helping ICE.

In a call with reporters earlier this week, Mark Morgan, the acting director of the ICE, said the agency would target for deportation families that have received a removal order from a U.S. immigration court.

The action targeted 2,040 families, sources said. The other cities on the enforcement list are Miami, Baltimore, Atlanta, Denver, and New Orleans.

The sweep had been expected to be similar to operations that authorities have regularly done since 2003. They often produce hundreds of arrests.

This one was different because Trump announced Monday on Twitter that it would be the start of an effort to deport millions of people in the country illegally, a near-impossibility given limited resources of ICE, which makes the arrests and carries out deportation orders.

It’s also slightly unusual to target families – as opposed to immigrants with criminal histories – but not unprecedented. The Obama and Trump administrations have targeted families in previous operations. 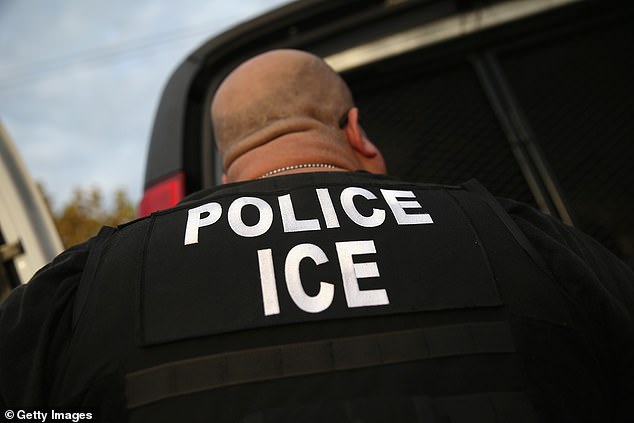 An ICE agent is seen in a file photo. The anticipated sweep is expected to be similar to operations that authorities have regularly done since 2003

Many of the mayors of the Democrat-controlled cities in line for enforcement sweeps have vowed to do everything in their power to stymie federal immigration enforcement.

In New York, Mayor Bill de Blasio, who is seeking the Democratic presidential nomination, tweeted his opposition to the enforcement action, calling it ‘a sick plot to tear families apart and force immigrants into the shadows.’

‘We will fight back at every turn to protect our immigrant families,’ Cuomo vowed.

‘New York will continue to be the beacon of inclusion and diversity that the nation and the world looks to.’

‘I have also personally spoken with ICE leadership in Chicago and voiced my strong objection to any such raids. Further, I reiterated that CPD will not cooperate with or facilitate any ICE enforcement actions,’ Lightfoot said in a statement. 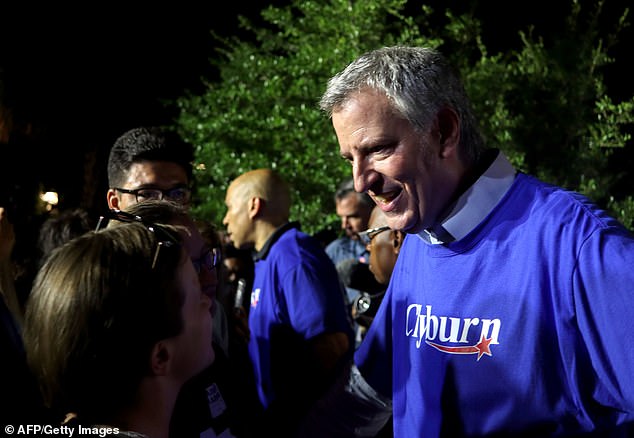 New York Mayor Bill de Blasio, seen on Friday night at a South Carolina Fish Fry, is among the local officials who are vowing to do everything in their power to stymie enforcement

The Los Angeles Police Department said in a series of tweets it would not participate or assist in the immigration enforcement actions.

Los Angeles Mayor Eric Garcetti in a statement called the enforcement efforts ‘inhumane, disgraceful, and dangerous,’ adding ‘we won’t stand for it in Los Angeles.’

Houston’s Mayor Sylvester Turner noted in a statement the ‘rich cultural contributions’ of the city’s immigrants, and said: ‘The city does not try to do ICE’s job, nor does it try to impede ICE.’

The number of migrants apprehended crossing the U.S.-Mexico border surged in May to the highest level since 2006.

Most of the migrants are from Central America, and are seeking asylum, a process that can take years.

Many families are released into the United States for the duration of the process because of limits on how long children can be detained.

Last fiscal year, ICE’s Enforcement and Removal Operations unit arrested over 158,500 individuals in the country illegally, an 11 percent increase over the prior year and the highest number since 2014. The agency says 66 percent of those arrested are convicted criminals.