House Speaker Nancy Pelosi lashed out at President Trump for his handling of the coronavirus crisis while saying she wished she could be working with any other former Republican president.

‘Observing his behavior I have concluded he is like a man who refuses to ask for directions,’ Pelosi announced at the top of the weekly press conference Thursday.

The California Democrat implored Trump to fully utilize the Defense Production Act to increase the country’s COVID-19 testing capacity and also provide frontline responders with more personal protective equipment, as there are still shortages, she said.

House Speaker Nancy Pelosi said Thursday that she believed President Trump was like a ‘man who refuses to ask for directions.’ She implored that the president listen to the scientists and also fully utilize the Defense Production Act to boost testing and PPE production 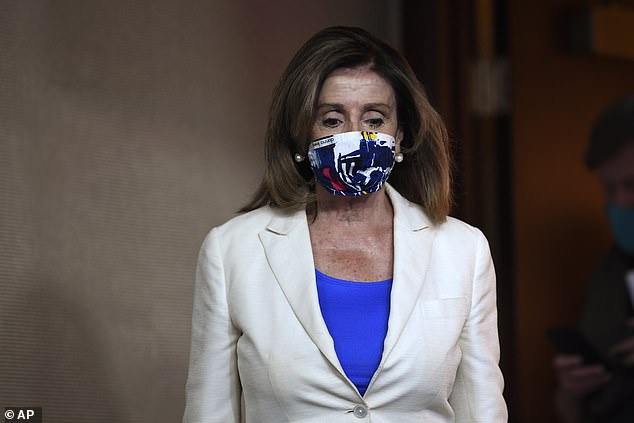 House Speaker Nancy Pelosi, photographed wearing her mask as she entered her weekly press conference, said she ‘yearn[ed] for other Republican presidents’ because they ‘had a shared commitment to the governance of our country’ 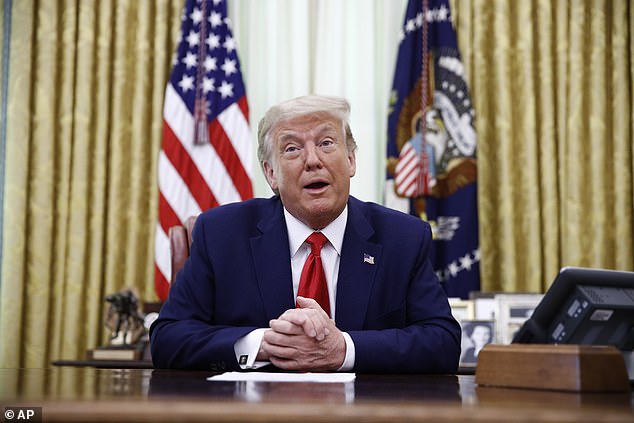 House Speaker Nancy Pelosi also ripped President Trump (pictured) for his insistence that schools reopen while a majority of the country is seeing coronavirus spikes. She said the least he could do is get the schools proper equipment

She pointed out that ‘all of the answers are there.’

‘The scientists have the answers,’ she continued. ‘We know that testing, tracing, treating, distancing, masking, sanitation can stop the spread of this virus.’

‘And yet the president continues to go down the wrong path and refuses to ask for directions from scientists who know better than any of us,’ she added.

She said the testing delays – with some Americans not receiving COVID-19 test result for one or two weeks – and continued PPE shortages amounted to a ‘massive dereliction of duty’ at the hands of the president.

Pelosi also ripped Trump for his insistence that children head back to school, while the outbreak is ticking up in a majority of states.

She said it was personal because her youngest grandchild attended public school in San Francisco.

‘Instead of threatening schools, instead of the secretary of Education saying children should take risks, astronauts take risks. Oh really? Oh really? … the very least the president could say is we’re going to have the equipment necessary.’

She knocked the broader Republican Party and Trump for suggesting things like the $600 extra a week in unemployment benefits were too pricy for the country.

‘Two trillion dollars that’s what they added to the deficit to pass their tax scam a copule years ago, which gave 83 per cent of the benefits to the top 1 per cent,’ Pelosi pointed out. ‘They’re in like a caste-system mode.’

And when she was told that Trump was hosting a White House event Thursday afternoon focused on cutting more regulations, she went after him for his recent decision to roll back part of the National Environmental Policy Act.

‘I’ll tell you this, he’s done a lot of bad things,’ she said. ‘What does he do but say, “I’ve got beans on my desk” and people cover that,’ she said, a light smack at the media.

She was referring to Trump posing with cans of Goya beans after liberals called for a boycott for the CEO being complimentary of the president.

‘He’s going to rise up people from poverty by making them breath foul air. I don’t get it,’ Pelosi also said.

The House speaker mentioned that NEPA was a Richard Nixon-era law.

‘I yearn for other Republican presidents,’ she said. ‘While we may disagree on many points, at least we had a shared commitment to the governance of our country.’

Pelosi arrived in Congress in 1987, meaning that she served in Washington alongside GOP Presidents Ronald Reagan, George H.W. Bush and George W. Bush, prior to Trump.

And as she previewed some of the bills Democrats planned to pass in the coming weeks, she taunted Trump again at almost a whisper – as the president has broadly objected to the removal of monuments, including Confederate statues.

‘We’re going to be passing bills next week or the next about removing statues from the capitol of people who have committed treason against the United States of America,’ Pelosi said.