Nancy Pelosi defies Democrats calling on her to quit

Nancy Pelosi is the chief villain of Republican campaign ads. The leader some Democrats promise to vote against. The subject of much speculation that her grip on power is coming to an end.

Nevertheless, she says she’s not going anywhere – and certainly not while President Donald Trump is in the White House.

‘This is not anything to make a big fuss over, it’s politics,’ Pelosi said in a 35-minute phone interview with The Associated Press. ‘I can take the heat and that’s why I stay in the kitchen.’

Pushing back on those who say her leadership position is in jeopardy, Pelosi all but dared her doubters to envision any other House Democrat sitting across the table to negotiate with Trump.

‘I have a following in the country that’s unsurpassed by anybody, unless they’re running for president,’ Pelosi said.

Trump and the Republicans are eager to see her go, she said, ‘and I’m just not going to let them do that.’

No goodbye: ‘This is not anything to make a big fuss over, it’s politics,’ Pelosi said. ‘I can take the heat and that’s why I stay in the kitchen.’ 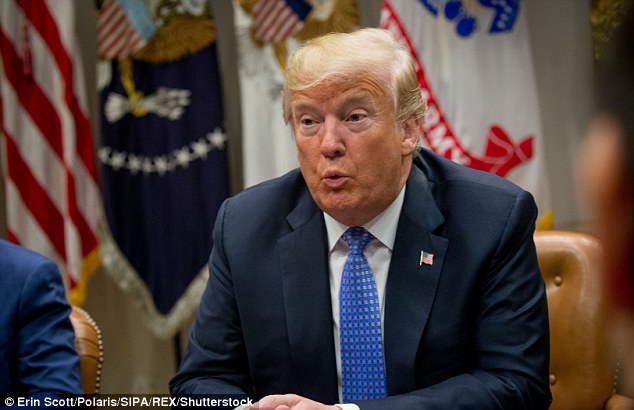 Me v him: Pelosi says Trump and the Republicans are eager to see her go, she said, ‘and I’m just not going to let them do that.’

With Democrats bullish about winning back the House majority, Pelosi is already beginning to lay out a detailed early-days agenda that could be set in motion come January.

Beyond cleaning up corruption, lowering health care costs and providing bigger paychecks, Pelosi told AP the Democrats would push forward legislation on background checks for gun purchases and legal status for young immigrants brought to this country illegally, often referred to as ‘Dreamers.’

Yet Pelosi’s return to the speakership, if Democrats triumph, is far from assured.

Dozens of Democrats – candidates and a few lawmakers – are saying they may not back her, creating an unprecedented groundswell for new leadership.

‘I think we’re in different territory now,’ said Rep. Tim Ryan, the Ohio Democrat who won about one-third of the Democrats during a private caucus vote when he mounted a symbolic challenge against Pelosi two years ago. ‘It’s time to turn the page.’

But Pelosi has faced uprisings from the ranks before, most notably after Democrats lost control of the House after the tea party Republican wave of 2010. Anyone who is counting her out – and many are trying to show her to the exits- may be underestimating her staying power.

‘It’s immodest of me to say, but I say to women now, ‘Just go for it.’ Tell them why you think you’re the best person to do this job,’ she said.

‘I want to be an example to them, just to say, ‘Don’t run away from a fight.’ If you think you’re the one that should be there, you make the fight.’

It’s not that other Democrats haven’t tried to replace her. Pelosi’s top lieutenant, Democratic Whip Steny Hoyer of Maryland, has long coveted the top job, waiting out Pelosi for his moment to hold the gavel. He has been promoting himself to colleagues as a ‘bridge’ to the next generation of leadership.

Assistant Democratic Leader Jim Clyburn of South Carolina let it be known recently that he, too, is willing to take the helm if Pelosi falls short, lawmakers said. That prospect is appealing to many Democrats, as he would be the first Africa- American speaker.

And younger lawmakers, including Ryan, have not shut the door on running. Some say it’s time for a clean sweep, and that replacing 78-year-old Pelosi with 79-year-old Hoyer or 78-year-old Clyburn is not the generational change that the Democratic caucus wants.

‘A lot of new people have come in and said, ‘Look, do I have to be here 30 years before I insert myself into the leadership group?’ ‘ said Rep. Emanuel Cleaver, D-Mo., who sees Clyburn’s potential bid as particularly influential in putting votes from the Congressional Black Caucus in play.

The chairman of the CBC, Rep. Cedric Richmond, D-La., is likely to support Clyburn if he runs for speaker.

The complaints against Pelosi do not necessarily stem from her firm grip on the caucus – she is known for being direct with lawmakers, using what she has called her ‘mother-of-five voice.’ But her long tenure has left little room for up-and-comers, and her visibility has become a liability for some Democrats. 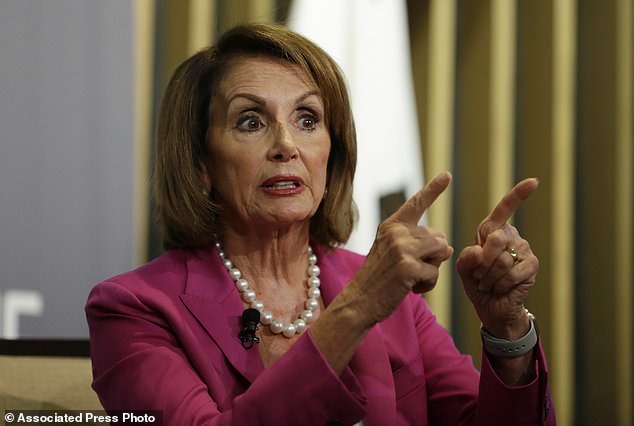 I’m a trailblazer: ‘It’s immodest of me to say, but I say to women now, ‘Just go for it.’ Tell them why you think you’re the best person to do this job,’ Pelosi told the Associated Press

Republicans have poured millions into vilifying Pelosi in ads, some $13 million so far this election cycle, and the House GOP’s campaign arm says Pelosi provides ‘a top argument’ for electing more Republicans.

As more and more Democratic candidates and lawmakers stare down campaign ads linking them to Pelosi, some are pledging to vote against her. When the cameras turn on them during the speaker vote once the new Congress convenes in January, it’s hard to see how some of them will be able to belt out the name, ‘Pelosi.’

Rep. Linda Sanchez, D-Calif., a vocal proponent for new leadership, envisions more of a changing of the guard than an insurrection. ‘I didn’t say you grab the torch out of their hands and kick them down the stairs,’ she said in an interview.

The missing piece in the furious behind-the-scenes chatter over Pelosi’s future is an obvious successor. Several leaders-in-waiting having moved on, and one lawmaker who had been seen as a possible replacement, Rep. Joe Crowley, recently lost his New York primary to newcomer Alexandria Ocasio-Cortez.

‘There can’t be a race when no one has declared their candidacy,’ said Rep. Sheila Jackson Lee, D-Texas, who joined Pelosi for a ‘Moms’ Summit’ in her Houston district this month that drew 600 people.

Some of them lined up for the chance to snap selfies with Pelosi. ‘She was not an unhappy camper; she was a happy camper.’

Democrats are loath to start the new Congress in January with a floor fight over the speakership if they are newly in power.

And many Democrats say that, with an unprecedented number of women are running for office, ‘it would be very unceremonial to have the first woman speaker of the House win back the house – to lead us to victory – and then not to have her be speaker,’ said first-term Rep. Ro Khanna, D-Calif.

‘If we win the House, I think Nancy stays, but there’ll be a transition at some point,’ the Silicon Valley congressman said.

Pelosi acknowledges she will not lead House Democrats forever and that if she retakes the gavel it will be as part of a transition to a next generation of leadership.

Two years ago she was prepared to retire if Hillary Clinton was in the White House. But once Trump won, she felt compelled to stay – ‘a four-year extension,’ as she puts it – to protect the Affordable Care Act, banking reform and the party’s other accomplishments.

‘We think the fate of the nation is at stake,’ she said.