The video was shot by the charity World Animal Protection at three farms which allegedly supply the popular high street restaurant chain.

Footage shows chickens unable to stand fluttering on dirt floors, thousands of birds in cramped sheds and dead birds being discarded with a digger. 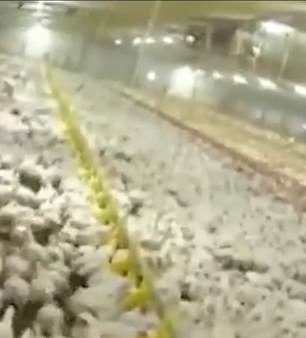 Undercover footage shot at three farms which allegedly supply Nando’s shows chickens unable to stand fluttering on dirt floors, thousands of birds in cramped sheds and dead birds being discarded with a digger

Many of the birds appear to have have poorly-formed feathers and World Animal Protection claimed in their video that the ‘fast-growing’ birds struggled to ‘cope with growing so big, so quickly.’

The charity claimed the farms in question, in Hertfordshire and Shropshire, supply Nandos.

They also said that birds seen with their legs splayed beneath their bodies was a result of skeletal and joint disorders called dyschondroplasia, which affects the growth of bone and cartilage.

Also shown in the video are chicks being thrown into buckets after being killed because they are sick or not growing quickly enough. 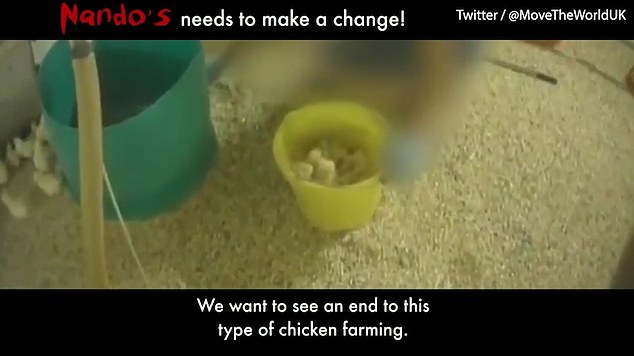 Workers from the farm can be heard in a separate video saying the farms supply Nando’s.

In reference to thousands of birds which have recently left the farm, one says, ‘they are likely to go to Nando’s.

‘Don’t know if you’ve been there [Nando’s] before, but they have like whole chicken and sort of smaller, so they’ll take these ones.’

At another farm, a worker was asked if the small chickens were going to Nando’s and he responded: ‘Yes.’

He continued: ‘It’s a thing because obviously Nando’s like the smaller chickens so pretty much all of them will go to Nando’s.’

World Animal Protection also claimed their investigators witnessed workers swinging birds by their necks to kill them and said many were suffering from multiple health problems because of their cramped and overcrowded pens. 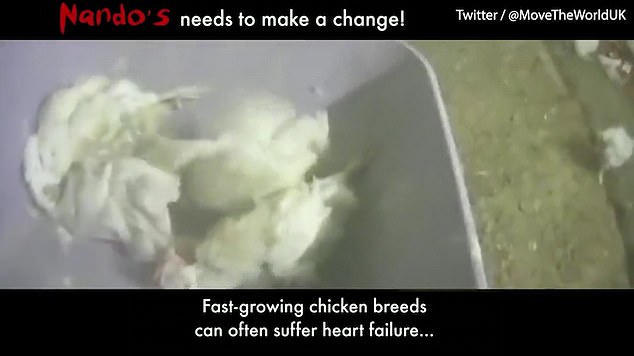 The restaurant chain is part of the Red Tractor scheme, which meant to guarantee high standards.

World Animal Protection have set up a petition calling for the firm to ‘improve their chicken welfare’.

They said:   ‘Nando’s is loved for its tasty PERi-PERi and cheeky banter. But in reality, it’s actually selling you chickens that grew so quickly they suffered terrible health problems during their short, miserable lives.

Many Nando’s chickens live with painfully deformed legs and hearts and lungs that struggle to keep up with growing too big, too fast.

‘This often means they cannot walk and die prematurely.

‘Chickens are also kept in cramped conditions with little space to move, preventing them from behaving naturally.’ 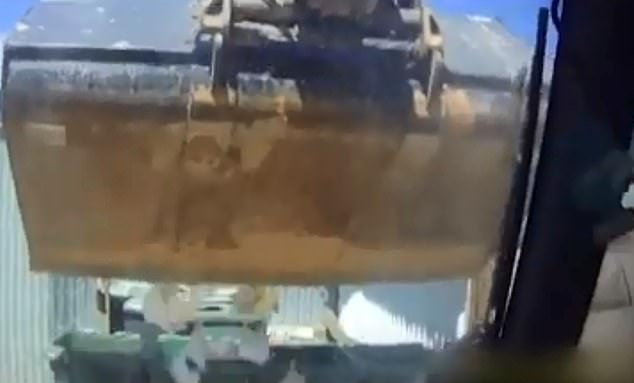 In the clip, filmed by charity World Animal Protection, dead birds are seen being tipped by a digger into bins

A spokesman for the charity told Mail Online: ‘This distressing footage showcases the harrowing conditions that fast-growing chickens endure on farms which supply Nando’s restaurants.

‘This is hard to watch and our research shows that Nando’s customers expect better from the chain.

‘We’ve asked to meet Nando’s to discuss the footage but they have refused, so we now feel it’s important for Nando’s customers to see the truth about the chickens it uses. 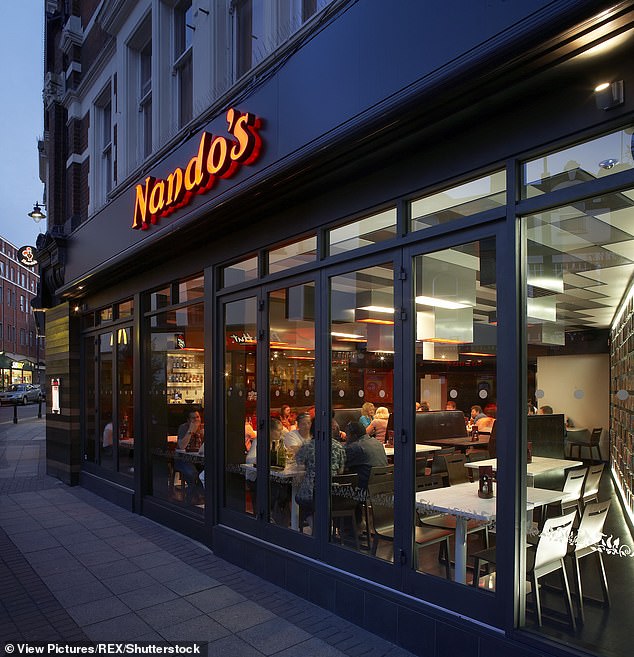 ‘Although extremely uncomfortable to watch, we hope this investigation will galvanise Nando’s customers into signing #TheRealCheekyNandos petition, calling on Nando’s to stop using fast-growing chickens from these types of farms.

‘If not, Nando’s chickens will continue to suffer from catastrophic health issues and live their short lives in unnecessary pain.’

A spokesman for Nando’s said: ‘We take animal welfare very seriously, knowing it’s as important to our customers as it is to us.

‘We are extremely shocked by this footage and have started a full investigation with the supplier to find out what happened and to ensure it doesn’t happen again.’