Naomi Campbell commanded attention as she attended the opening of Forever – Valentino, an exhibition held at M7 art centre in Doha, Qatar, on Thursday night.

The supermodel, 52, looked incredible in a pink gown while wowing onlookers with an elaborate head piece with coordinating ribbons as she walked the red carpet in the Middle Eastern country.

The event comes just weeks ahead of the Qatar World Cup, with the country facing growing criticism over its treatment of women, migrant workers and LGBTQ+ people.

Striking: Naomi Campbell commanded attention in an unmissable pink gown and an elaborate head piece as she attended a Valentino exhibition in Qatar on Friday – as the country faces growing human rights criticism

Meanwhile Sabrina Elba, 33, commanded attention in a billowing green gown for the event where she was joined by Janet Jackson, 56, who wore a brown dress.

The floaty number featured statement oversized sleeves and a flattering two-tier design and was teamed with white heels to boost her height.

She had her dark tresses styled into a sleek choppy bob and opted for a radiant makeup look to show off her pretty features. 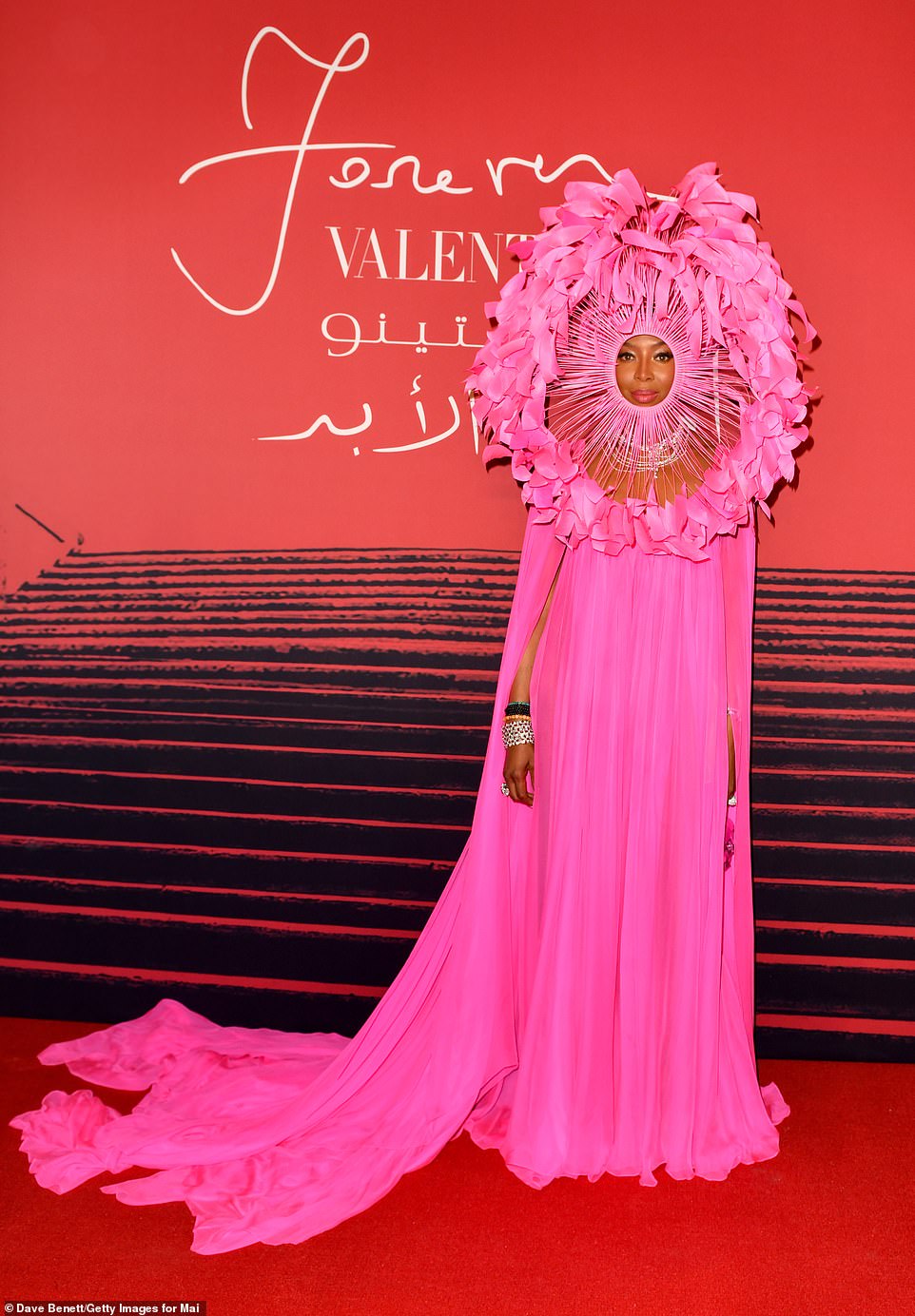 Wowzers: The supermodel, 52, looked incredible in a pink gown while wowing onlookers with an elaborate head piece with coordinating ribbons as she walked the red carpet in the Middle Eastern country

The event comes just weeks ahead of the Qatar World Cup, which has faced growing criticism over its treatment of women, migrant workers & the LGBTQ+ community.

The decision by FIFA to hold the World Cup in Qatar has been surrounded by controversy – particularly in relation to migrant workers and the LGBTQ+ community.

Qatar has faced intense scrutiny of the physical and contractual conditions for hundreds of thousands of migrant workers in the tiny emirate since the World Cup hosting rights were won 12 years ago. 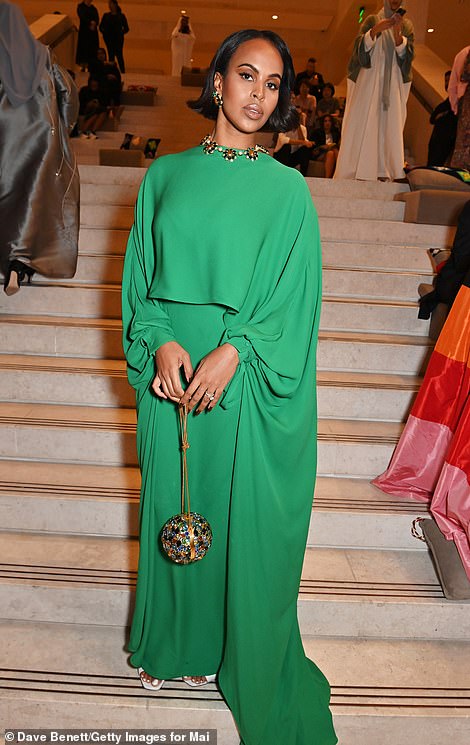 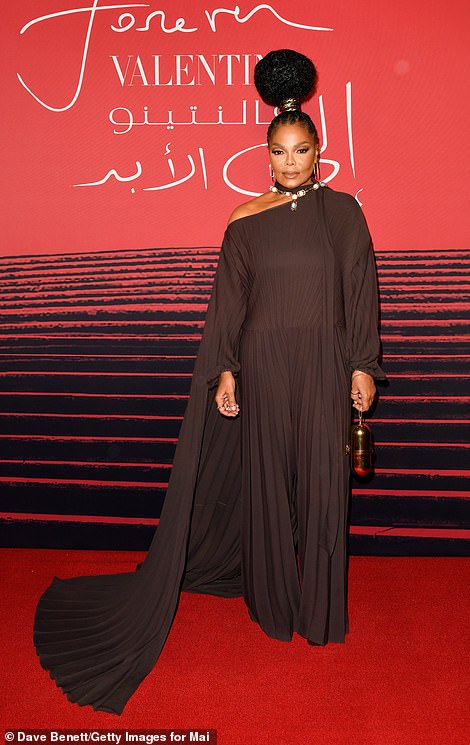 Stunning: Meanwhile Sabrina Elba, 33, (left) commanded attention in a billowing green gown for the event where she was joined by Janet Jackson, 56, (right) who wore a brown dress 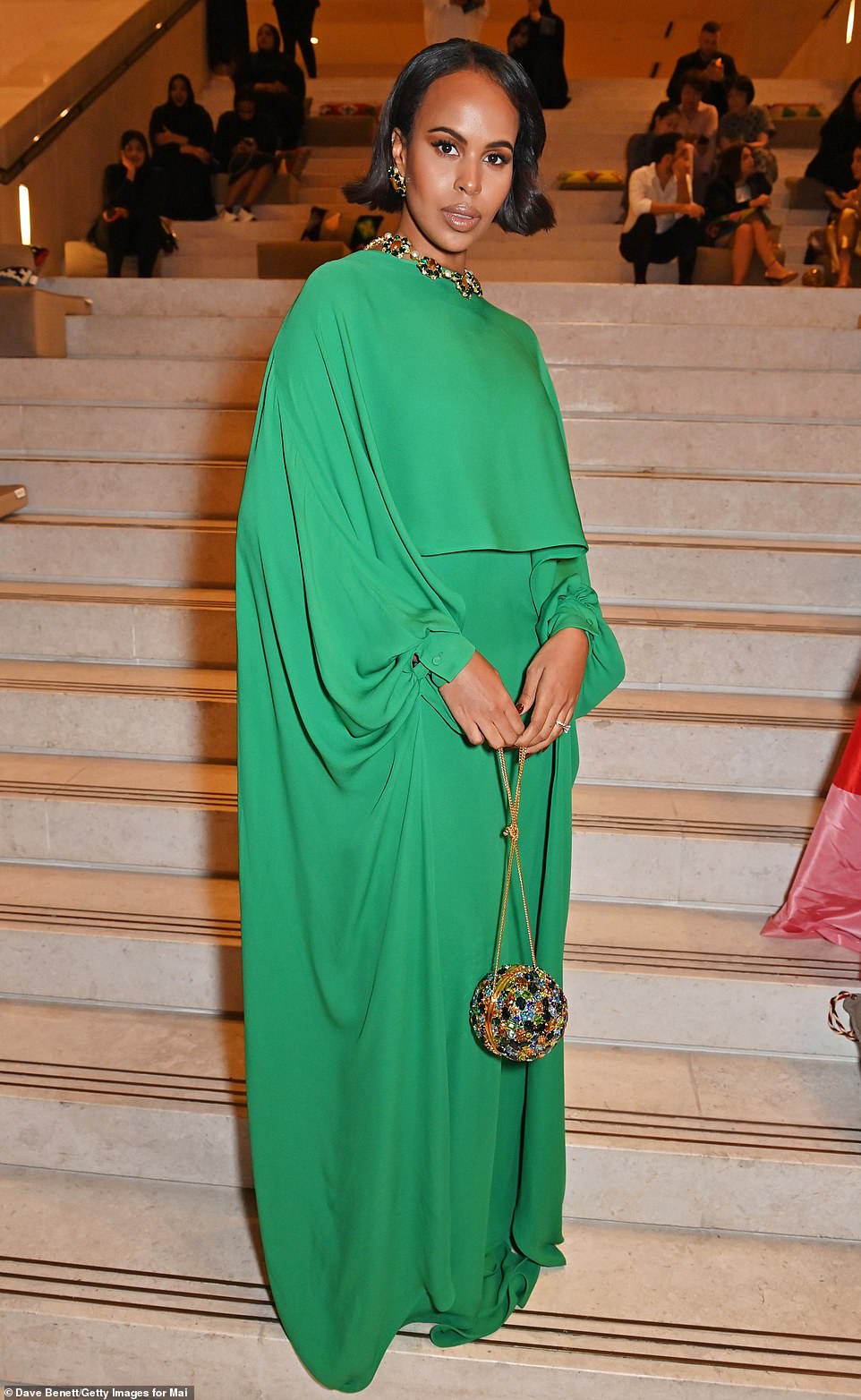 Beauty: The floaty number featured statement oversized sleeves and a flattering two-tier design and was teamed with white heels to boost her height 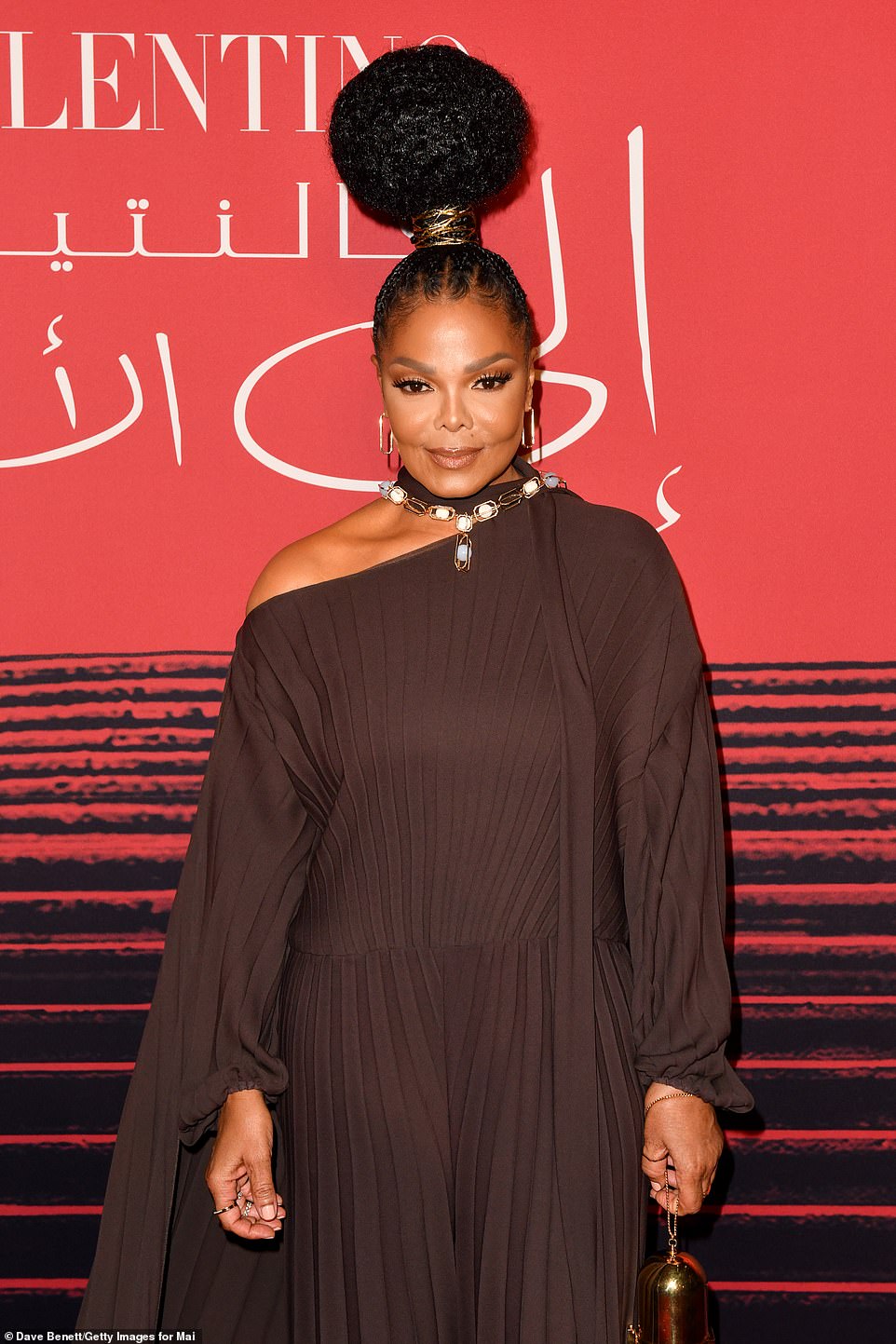 Here she is: Janet looked great in her brown dress which she teamed with a statement gold bag

It is yet to be seen how much time World Cup broadcasters will spend highlighting the allegations against the Qatari government, which include 2013 claims by The Guardian that workers were denied food, water, and were stripped of their passports.

Some allege they were not paid, or if they were, the payments were minimal and long overdue. A 2019 Daily Mirror investigation found that 28,000 workers were paid roughly $1 an hour over a 48-hour week.

Most damning, The Wall Street Journal reported in 2015 that over 1,200 workers died building the infrastructure for the tournament. Last year, The Guardian put that figure at closer to 6,500. 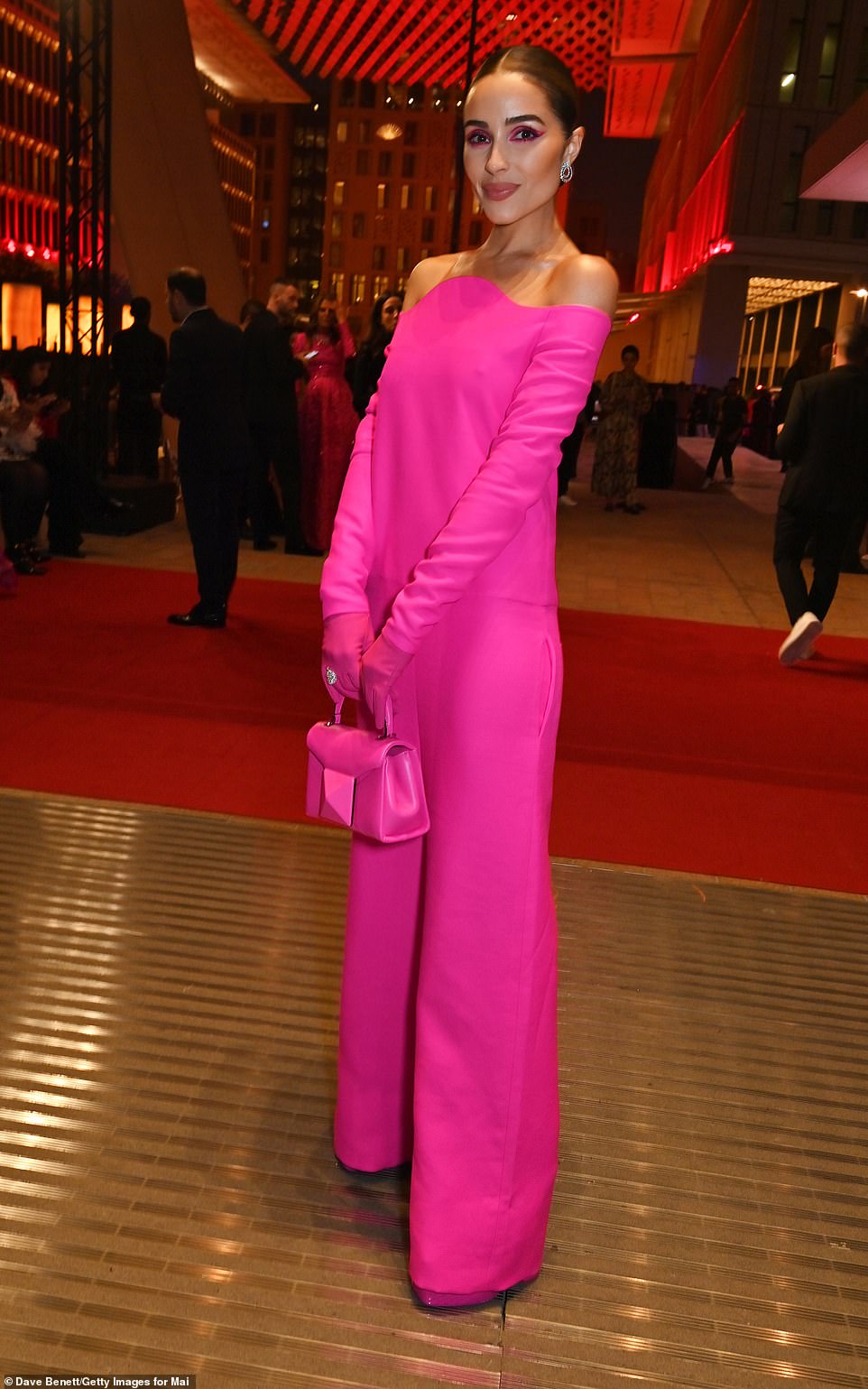 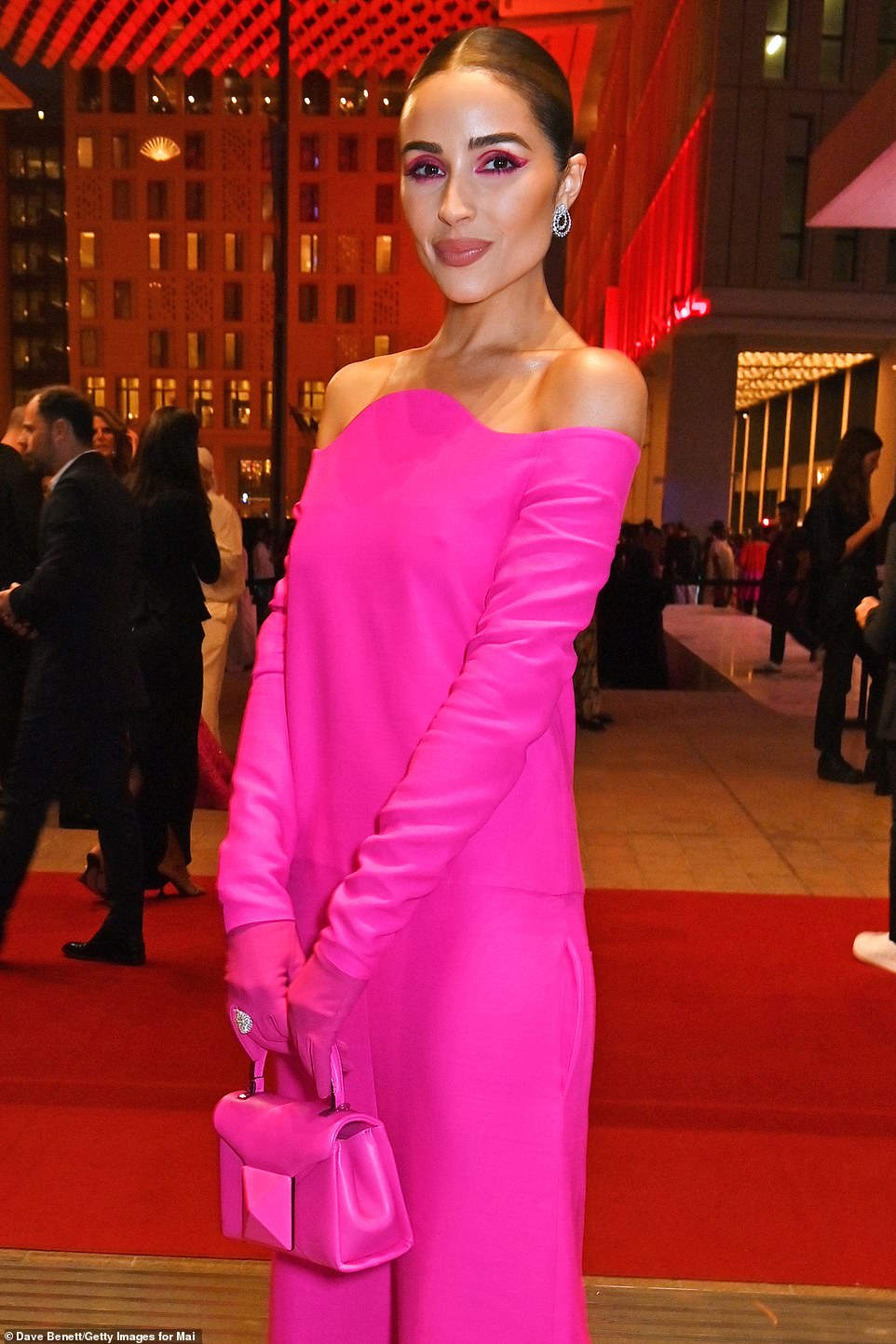 All pink! Olivia even sported matching eye makeup to complete her look 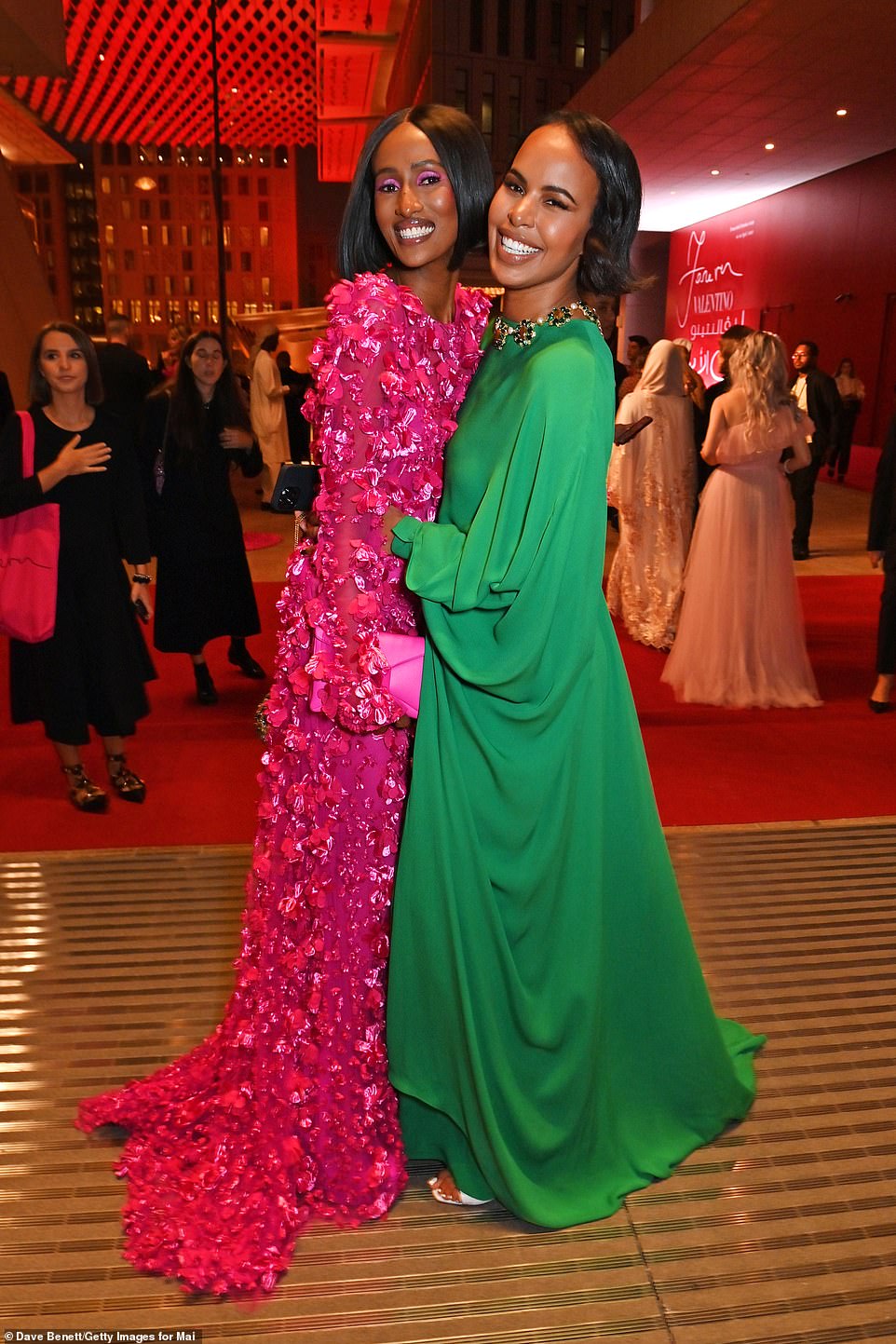 Pals: Chanel Ayan and Sabrina posed together for a sweet photo at the fashion event in Qatar on Thursday

Qatar also punishes homosexuality with imprisonment and considers men to be the guardians of their female relatives.

In March, FIFA president Gianni Infantino claimed Qatar has been progressive on labor rights: ‘I am pleased to see the strong commitment from the Qatari authorities to ensure the reforms are fully implemented across the labor market, leaving a lasting legacy of the FIFA World Cup long after the event, and benefiting migrant workers in the host country in the long term.’ 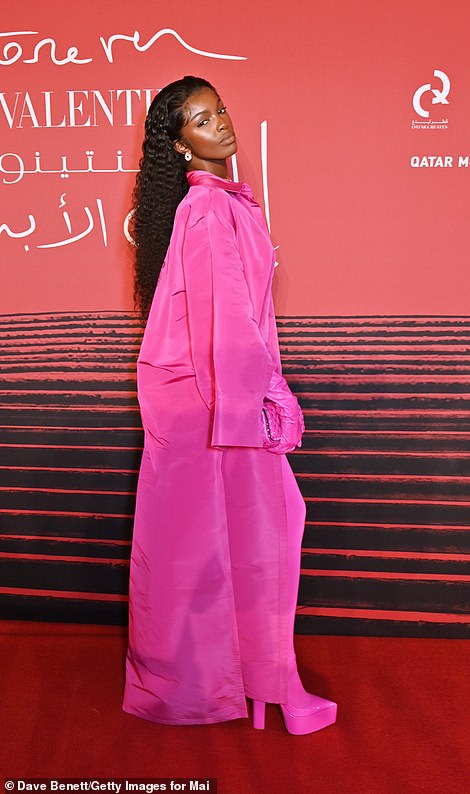 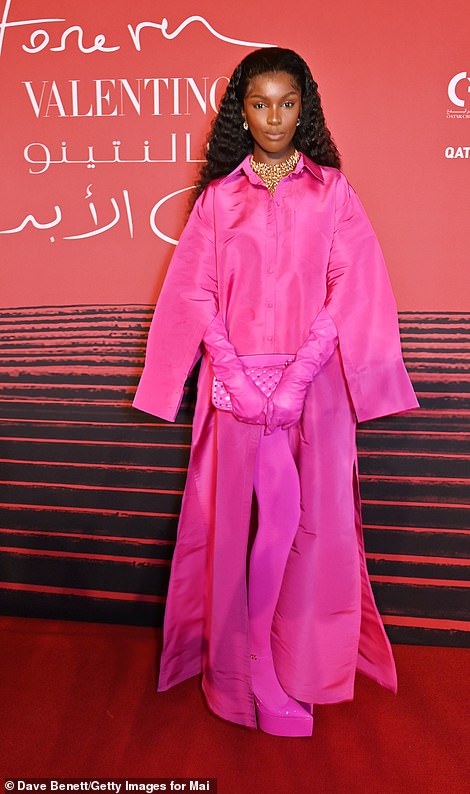 Bright: Leomie Anderson attended the opening of the exhibition as well and kept to the pink theme 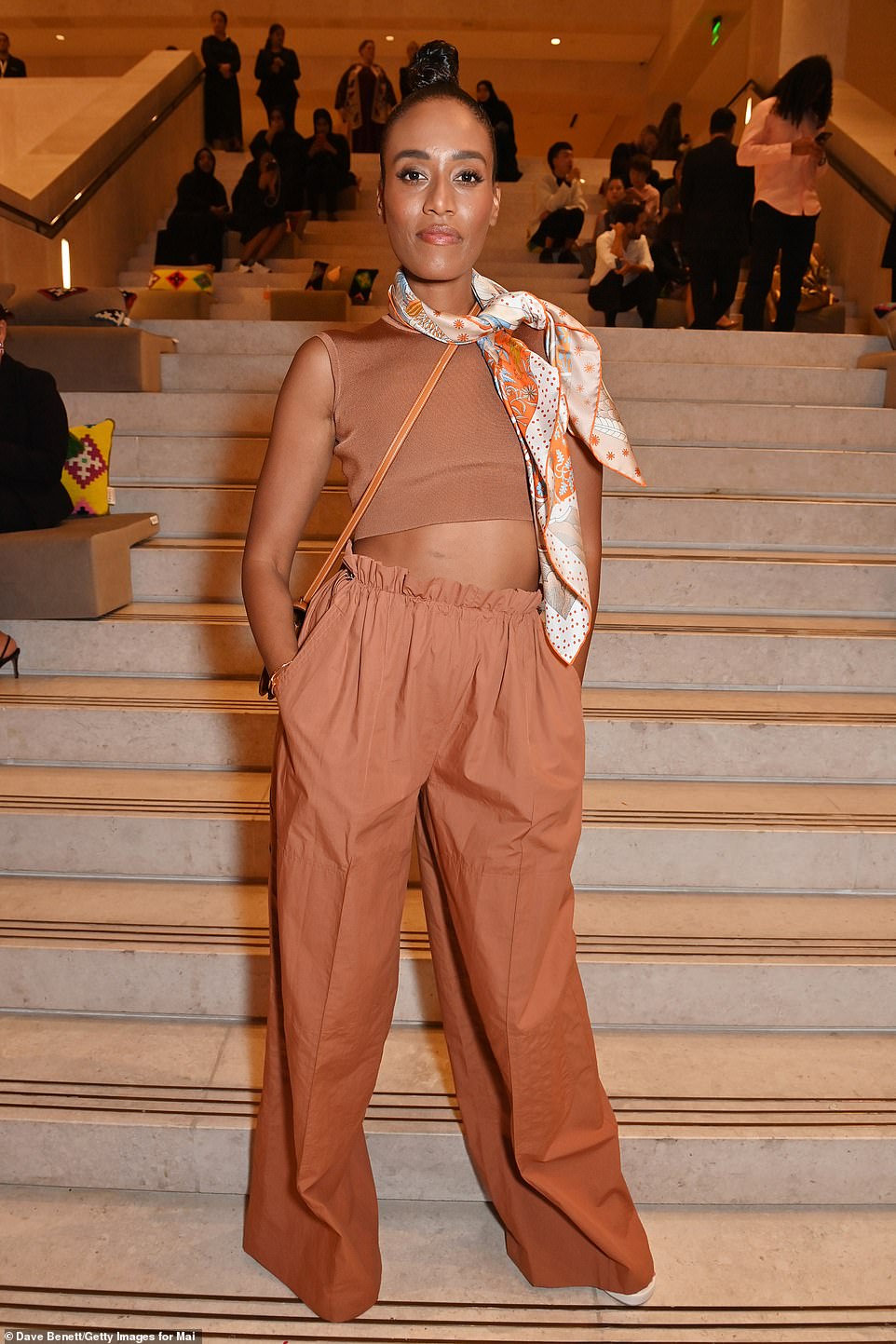 Figure: Adrienne Everett showed off her physique in a brown crop top and wide leg trousers at the event

Some campaigners have urged celebrities to boycott the World Cup, with Robbie Williams and David Beckham both coming under criticism for associating with the competition.

Robbie was recently unveiled as one of the music acts set to play at the Qatar Live concerts during a press conference in Doha.

Meanwhile, David agreed a £10million deal to become an ambassador for the country over a decade, which has resulted in him being the face of the World Cup 2022. 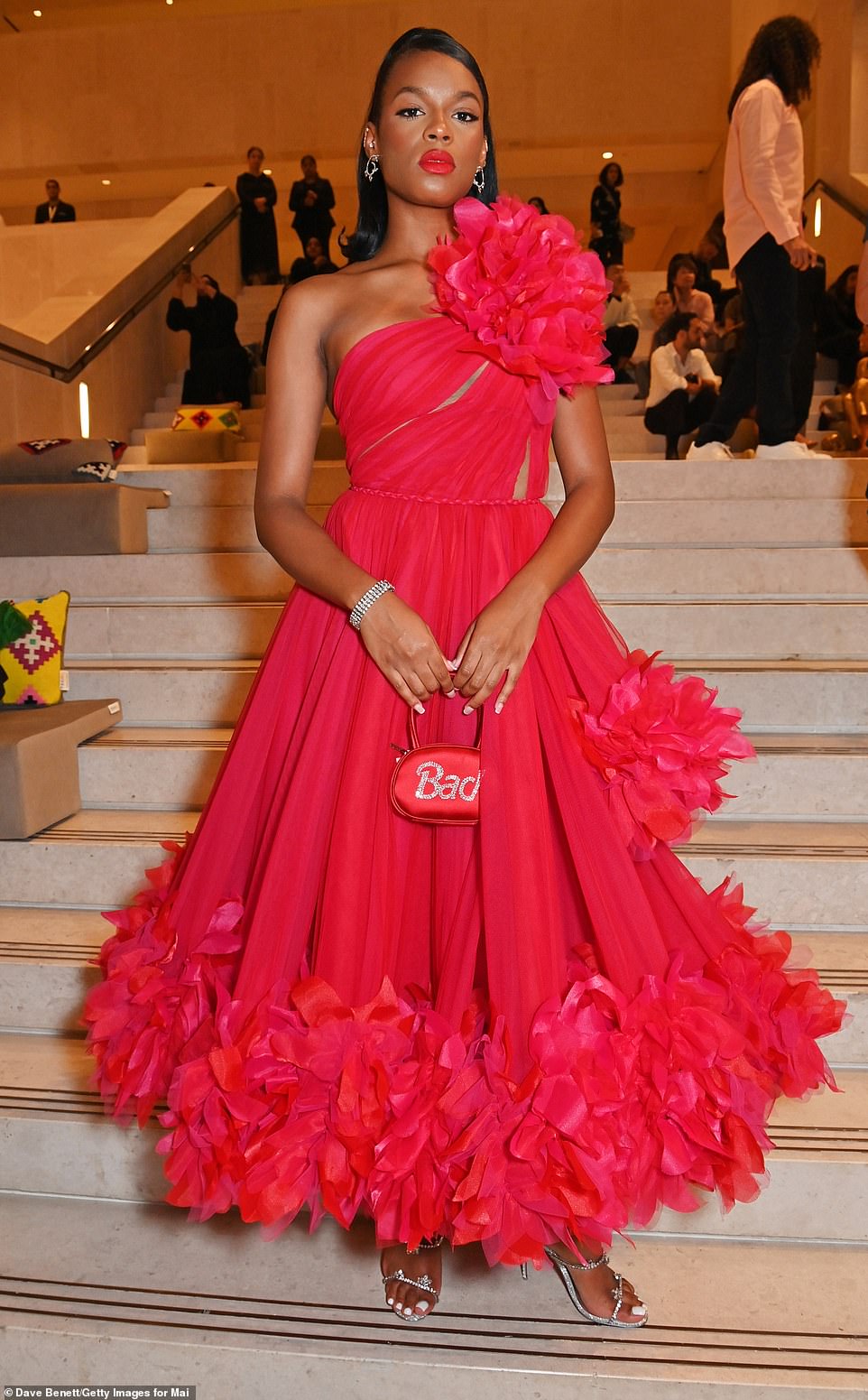 Wow! Model Didi Stone looked incredible in a feathered red dress which she teamed with silver heels to boost her height 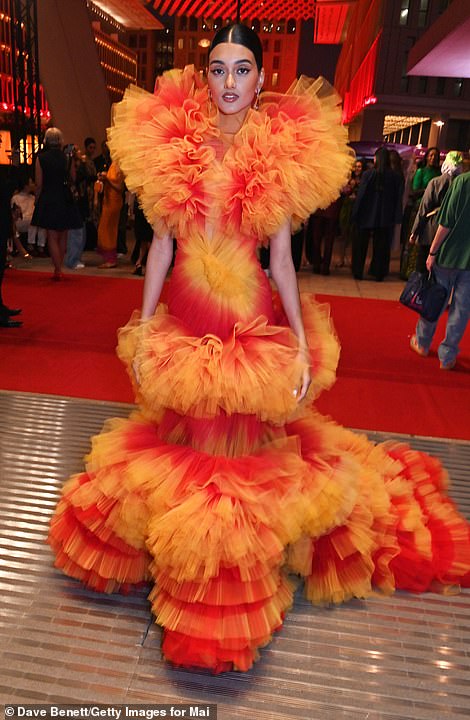 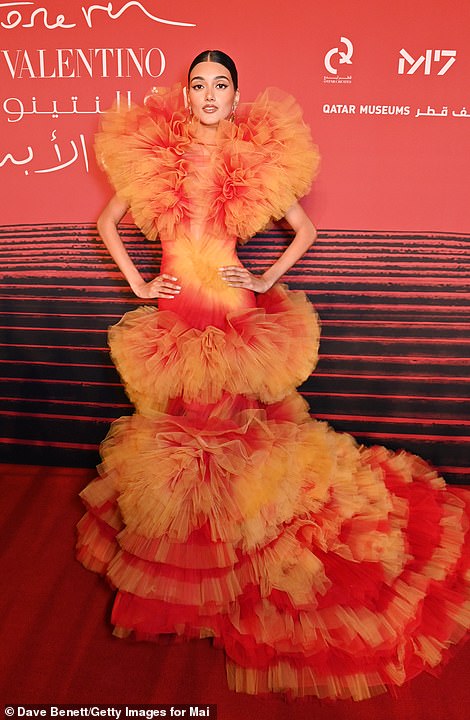 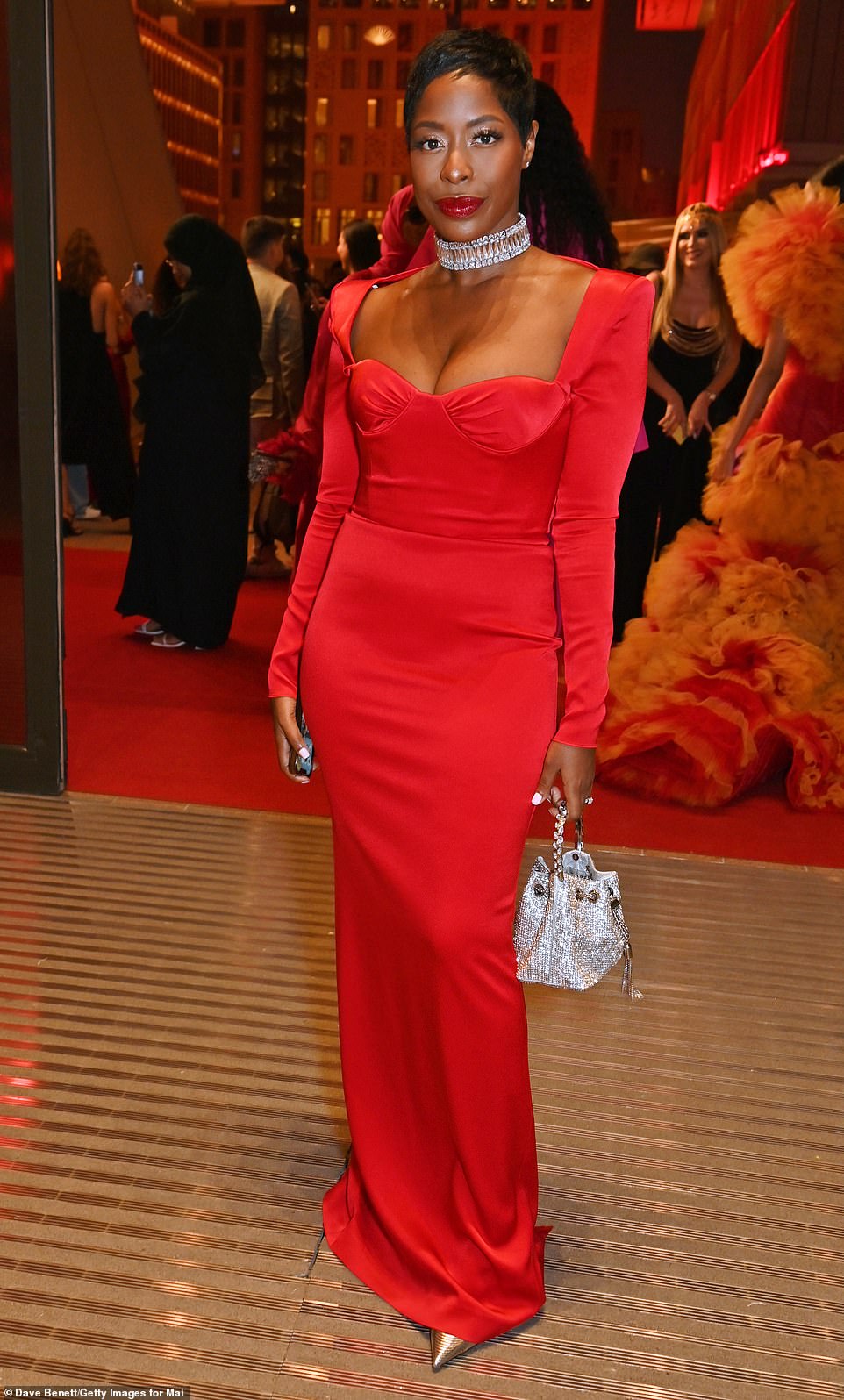 Sophisticated: Jenee Naylor wore a glamorous red dress with a sweetheart neckline for the event 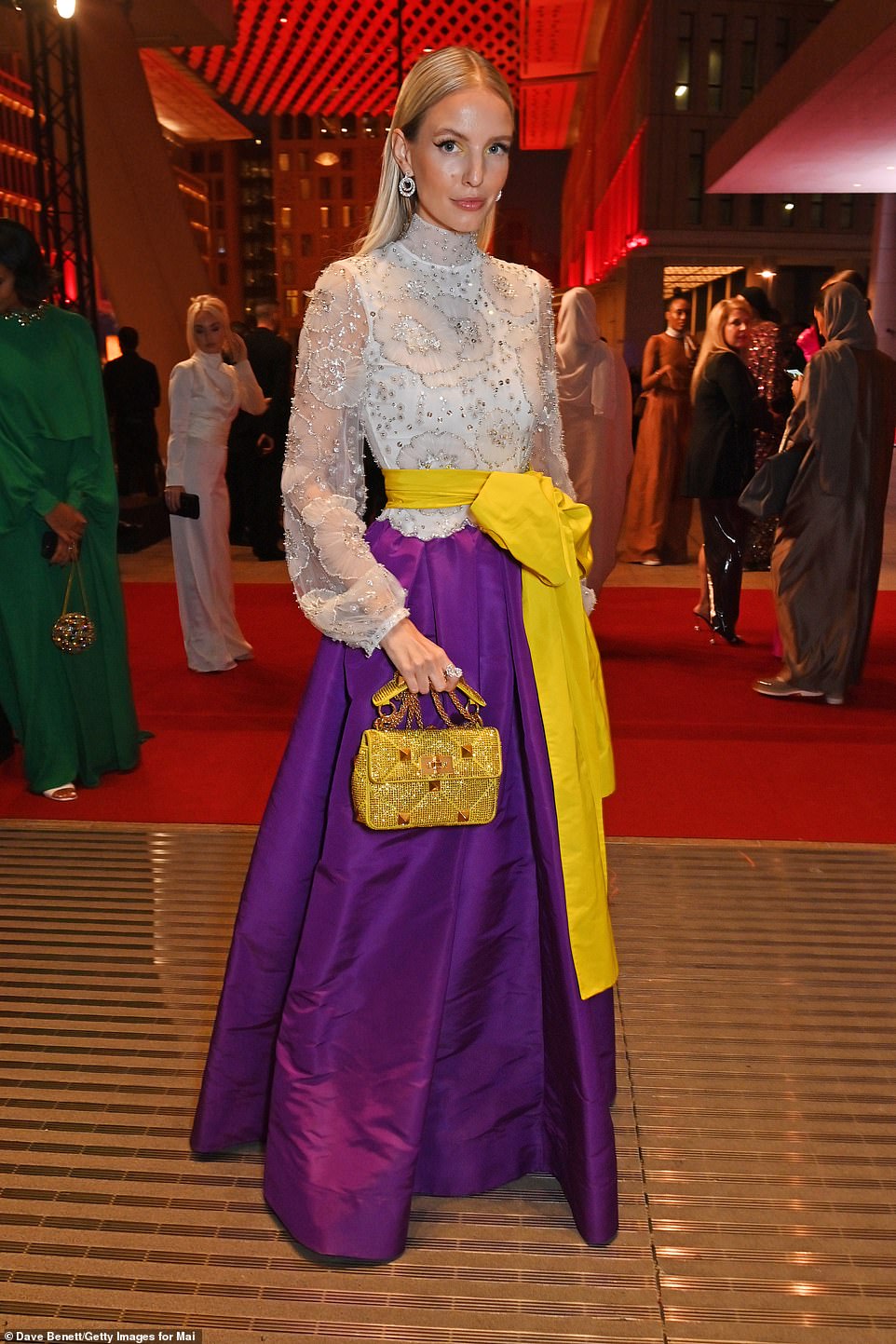 Opulent: Leonie Hanne attended the event in a gold and purple dress