Naomi Judd killed herself using a gun as she lost her battle with mental health, daughter reveals

‘Mom used a weapon’: Ashley Judd chokes up as she reveals her mother Naomi ‘used a firearm’ to kill herself last month after battling mental health issues aged 76

Country Music Hall of Famer Naomi Judd killed herself with a gun, her daughter has revealed.

‘She used a weapon…a firearm,’ heartbroken Ashley Judd shared in an interview with Good Morning America. ‘So that’s the piece of information we’re very uncomfortable sharing.’

Naomi, the Kentucky-born singer of the duo The Judds – mother of Wynonna and Ashley – died aged 76 on April 30 after a longtime battle with the disease of mental illness.

Ashley, who was visiting Naomi’s Tennessee home on the day she died, recalled her last moments with her mother.

‘It was a mixed day,’ Ashley revealed. ‘I was at the house visiting, as I am every day, and mom said to me “will you stay with me?” and I said: “Of course I will.”

The actress stepped outside to greet a family friend. When she went to notify her mother that their guest had arrived, she found her dead.

‘I went upstairs to let her know that the friend was there and I discovered her,’ Ashley shared. ‘I have both grief and trauma from discovering her.’

The actress, sharing the details of her mother’s death before the release of her autopsy report, reiterated that Naomi was ‘entitled to her dignity and her privacy’ and they will not be disclosing anything else.

Country Music Hall of Famer Naomi Judd (right) killed herself with a gun, her daughter has revealed. Naomi is picture wither her daughters Wynonna (left) and Ashley (center) 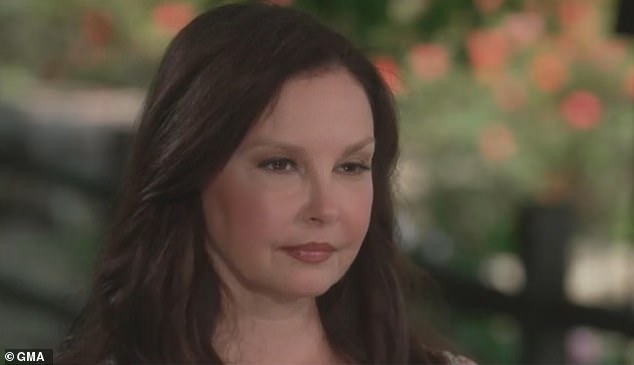 ‘She used a weapon…a firearm,’ heartbroken Ashley Judd shared in an interview with Good Morning America. ‘So that’s the piece of information we’re very uncomfortable sharing’

‘When you’re talking about mental illness, it’s important to make the distinction between the loved one and the disease,’ Ashley said. ‘My mother knew that she was seen and she was heard in her anguish and she was walked home.’

‘Our mother couldn’t hang on until she was inducted into the hall of fame by her peers,’ Ashley said. ‘That is the level of catastrophe of what was going on inside of her, because the barrier between the regard in which they held her couldn’t penetrate into her heart and the lie the disease told her was so convincing.’