The 21-year-old toasted her victory by popping open a bottle of champagne and took in her moment in the sun with her father Leonard Francois.

Osaka posed for several pictures and was seen walking along the sandy shores with the trophy tightly grasped in her hands. 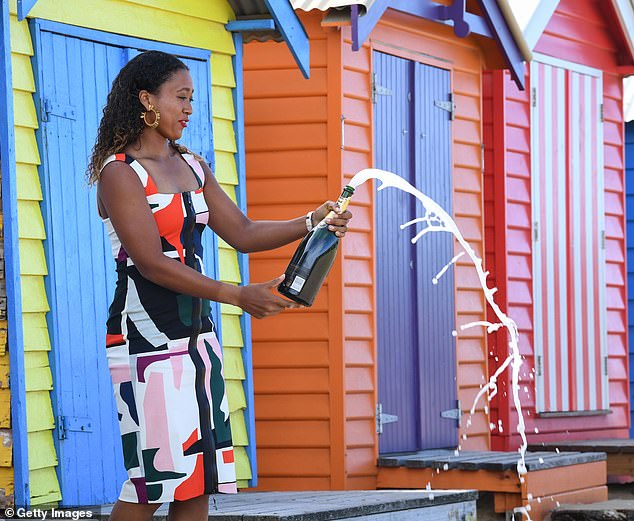 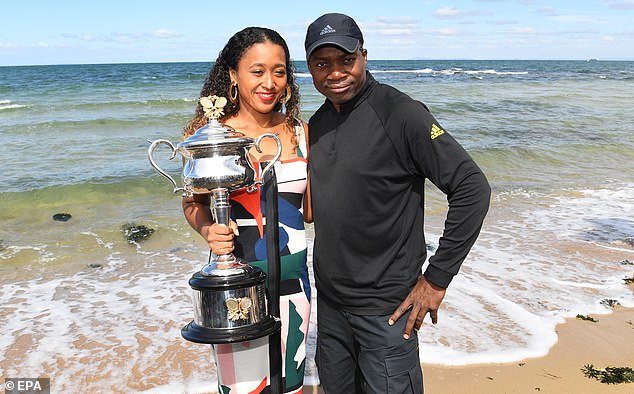 The Japanese star admitted her mind has already wandered to the possibility of a ‘Naomi Slam’ after she won her second consecutive major title at the Australian Open on Saturday.

Osaka followed up her US Open triumph by beating Petra Kvitova in a dramatic final at Melbourne Park.

The victory also earned Osaka the world No 1 ranking and, after two years of unpredictability, it appears the women’s game finally has a new star it can rely on.

So could Osaka follow in the footsteps of her idol Serena Williams by holding all four slam titles at the same time?

‘You guys know the French Open’s next, right,’ she said with a chuckle. ‘I love that clay court. 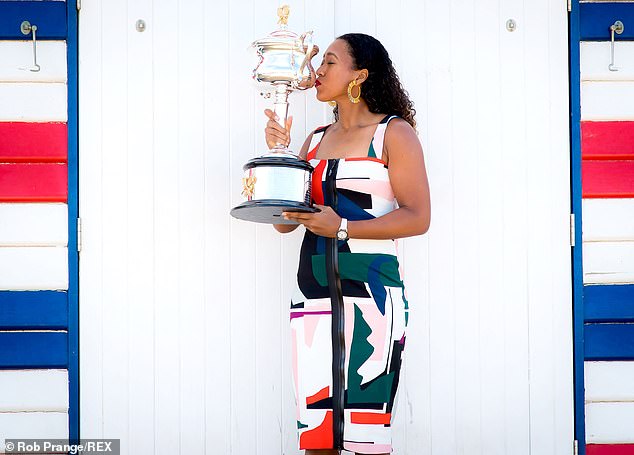 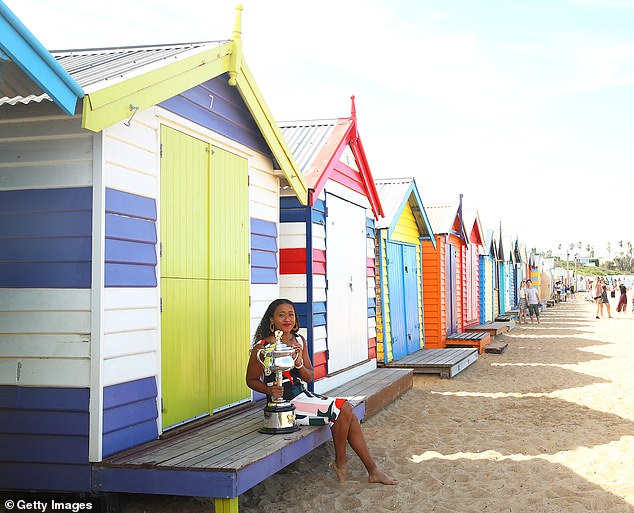 By lifting the Daphne Akhurst Memorial Cup, Osaka was literally fulfilling a dream having found her subconscious predicting the moment during the tournament.

‘But definitely I had some very vivid dreams. It was intense. I take it as a sign. For example, I was practising on Rod Laver one day and right before that they were doing some sort of movie shots with the trophy and I was able to see it for the first time in person. I was like, ‘I really want this’.’

The frightening thing for the rest of the field is that Osaka did not even find her best tennis for much of the tournament but showed a champion’s ability to fight through the difficult moments, not least when three match points slipped through her fingers in the second set against Kvitova. 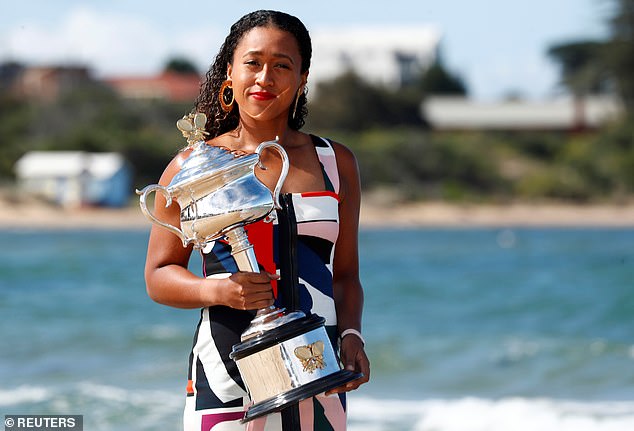 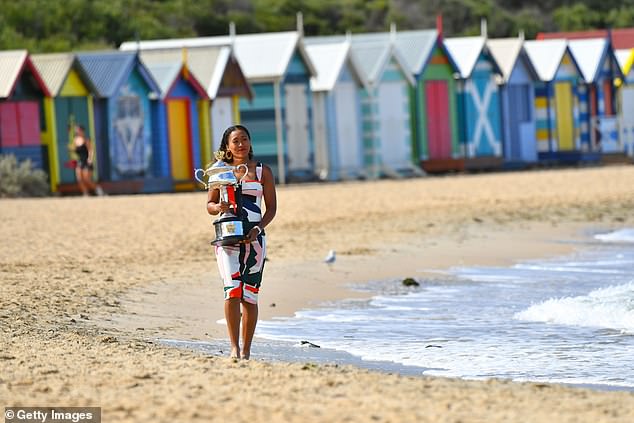 ‘I always hear stories that the best players win matches even when they’re not playing their best and I always wondered how they did that so I feel like this tournament for me was that,’ said Osaka. ‘It’s a new skill, and something I didn’t know I could do but, when the moment came, I was able to do it.’

Coach Sascha Bajin, with whom Osaka began working ahead of the 2018 season, has been a key influence in adding to her game, and he was thrilled with the way she turned the match back in her favour.

He said: ‘There’s not many words. But Naomi didn’t do anything wrong, Petra played just really unbelievable on those points. I was sweating a little bit, I have to admit it.

‘I think that was a huge effort from her. There’s nothing harder than to change the way you feel about things in an instant, especially on a stage like this, and she really showed maturity in getting her emotions under control and finding another way to win again. I’m really proud of her for that.’ 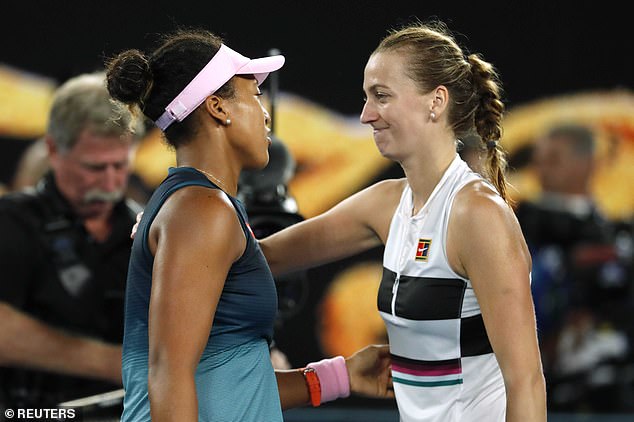 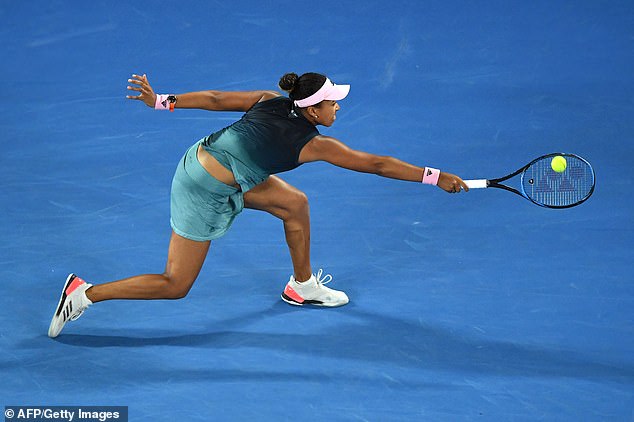 Bajin was also pleased to see Osaka given her moment in the spotlight after her maiden slam title was overshadowed by Williams’ New York meltdown and the reaction that followed.

‘It was good, she deserved it by going through so much,’ said the German. ‘It happened at the right time.’

Given how well she handled the transition to being a grand slam champion, there seems little chance of this triumph negatively affecting Osaka.

Bajin added: ‘I always say there’s two types of people in the world: one who gets satisfied after the little bit of success they have and the other person is the one who just wants to work harder, wants to get better, and that’s her.

‘We’re just here to help her achieve all those dreams. She’s amazing.’