A penalty given up by Andrew Robertson, a sloppy mistake by Virgil van Dijk, of all people. Liverpool became the first European champions to lose their next game out in this competition since AC Milan in 1994.

True, the Milanese went on to the final that year, as did Ajax, the team that beat them. And Liverpool also lost away to Napoli in the group stage 12 months ago, and eventually won the tournament . It’s the earliest of early days. Nobody reads too much into these group games anymore.

Even so, this was a crashing disappointment, given Liverpool’s current domestic form and their pedigree and growth in this competition. European champions usually get to bask in the glory a little longer than this. Instead, it is sleeves up and here we go again, given that one of the group, RB Salzburg, opened by putting six past Genk. Now this may be because the Belgians are hopeless and Salzburg may have been greatly flattered. Yet Liverpool cannot presume. Next month, when they play the Austrians at Anfield, there can be no slip-ups. 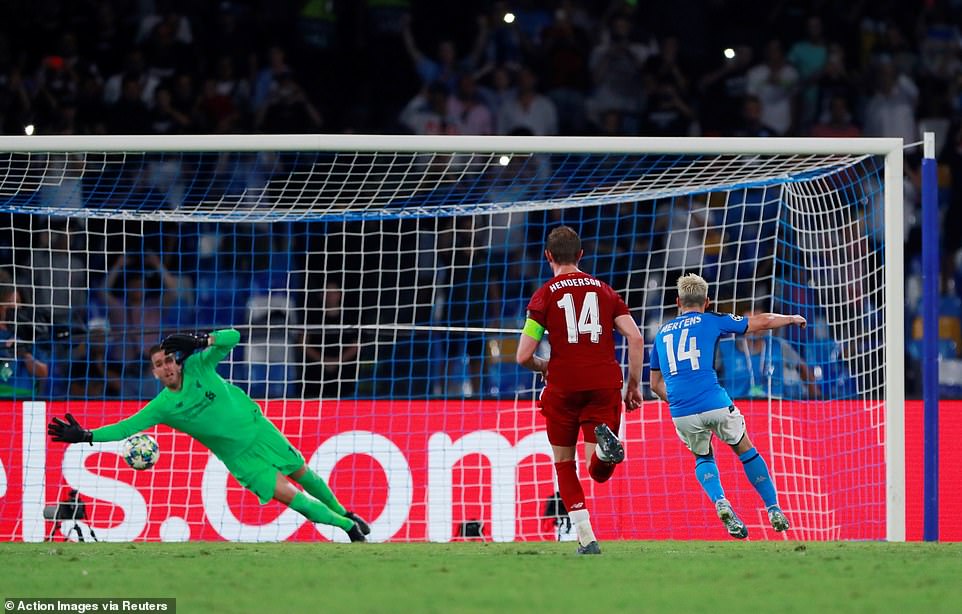 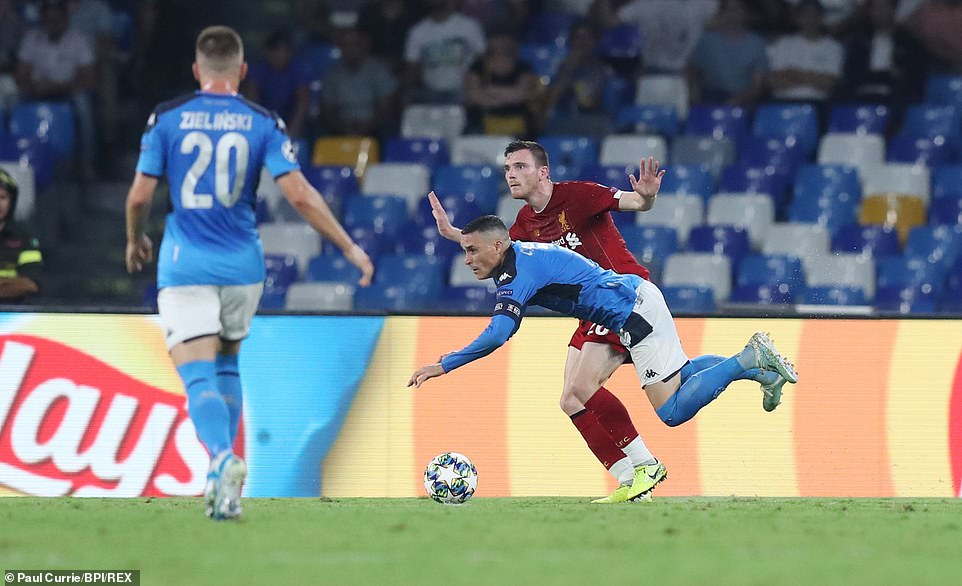 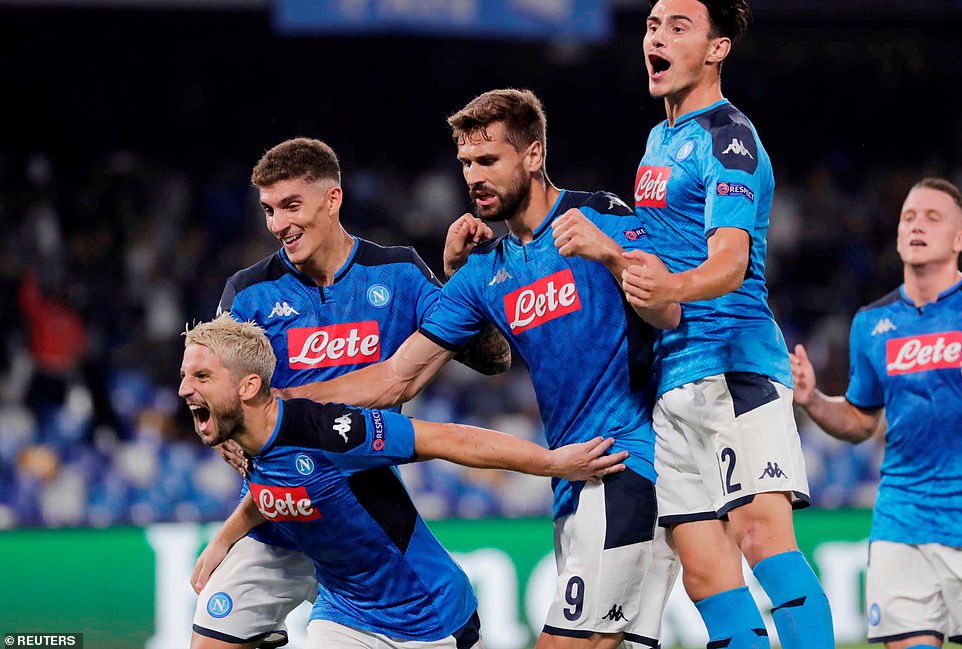 It took a superb piece of goalkeeping from Alex Meret to stop them taking a lead in the second half when the otherwise excellent Napoli defence made a hash of a simple clearance. To be fair, it was not the fault of Kalidou Koulibaly. He was outstanding all game and it is easy to see why he was on Liverpool’s shortlist had their move for Virgil van Dijk – who was quite magnificent, as ever – had not come to fruition.

So Koulibaly did his job on this occasion, too, a deep centre repelled with an equally forthright header which fell to his defensive partner Kostas Monolas, who was farther advanced. He made a complete mess attempting to push the ball on, however, and sliced his kick, sending it backwards and into the path of Mohamed Salah. It was a gift and Salah looked certain to take advantage, had Meret not been equal to his low shot, pushing it around the far post.

It meant Liverpool remained vulnerable to a random occurrence and with eight minutes remaining, one arrived: a blunder from the usually faultless Andrew Robertson. Jose Callejon, moved from a wide position in support of the attack in a smart move by Carlo Ancelotti, stuck out a leg in the manner of David Luiz, sent his man tumbling and gave referee Felix Brych no choice but to point to the spot. Adrian, who had been excellent all night, got a hand to Dries Mertens low shot, but it was not enough to keep it out.

Yet worse followed. Van Dijk was in possession, a state in which he is usually so calm, so precise, when he inexplicably turned and attempted to pass back to Adrian without seeing the lurking danger of Fernando Llorente. The former Tottenham man accepted the present gleefully, van Dijk put his head in his hands, his veneer of invincibility gone. Liverpool’s too. 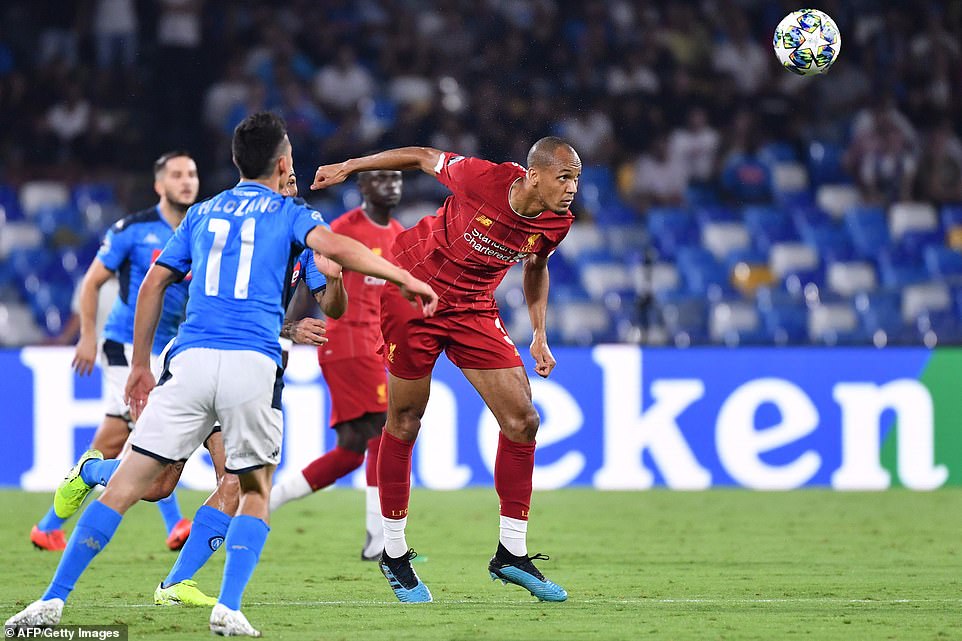 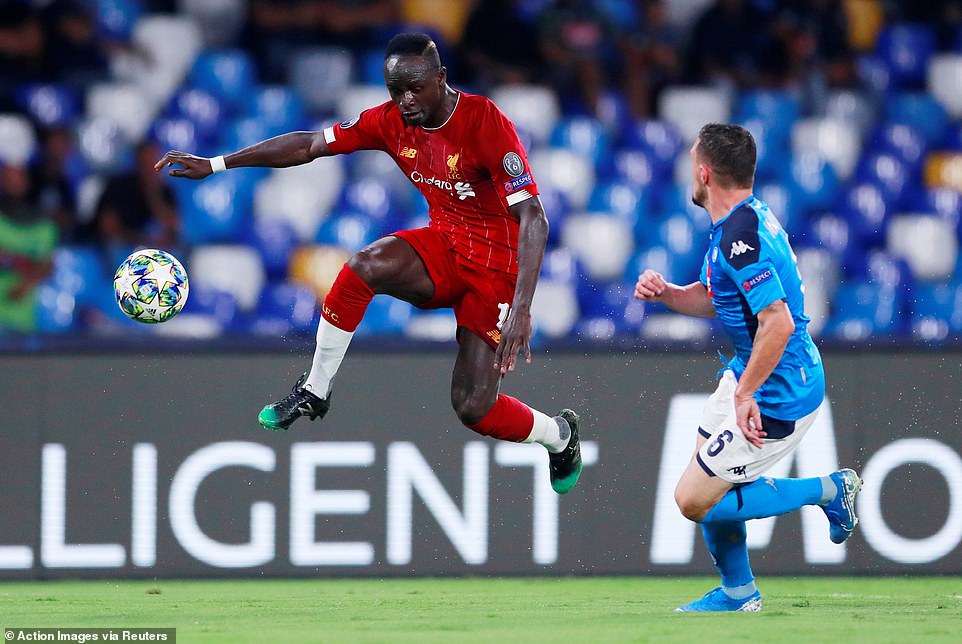 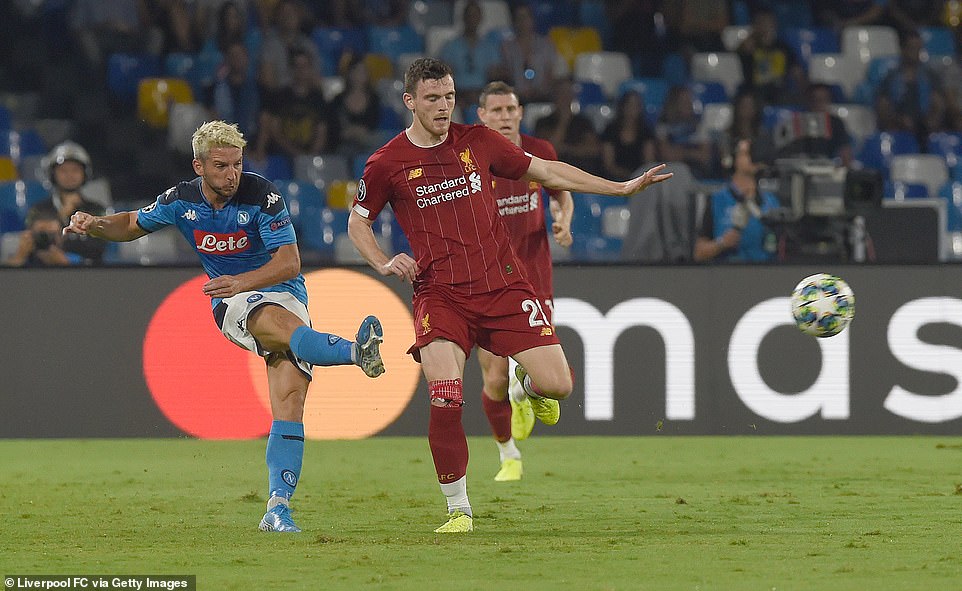 For a team with such talent in recent years it comes as something of a surprise that Napoli have won just four of their last 12 Champions League games. No surprise, however, that each of those victories has come at the Stadio San Paolo. Even with the bottom tier largely empty, it is a ferocious, inhospitable place, foreign in a way few grounds are these days. A crumbling, concrete bowl with a running track that is supposed to be an atmosphere killer and a moat that offers a clue to the mood within, it is a throwback to the days when European away fixtures were genuine steps into the unknown.

It hardly matters that a visit to Naples is not uncommon for English clubs, that Liverpool were here in the group stage last year, or previously in 2010. Every journey has an edge. Traffic in the centre was kept at bay for what seemed an age to allow Liverpool’s coach to get to the ground in time – yet the sirens of the police escort wailed forlornly as the bus found no easy passage through. The docile, day-tripper crowd that gathered outside the team hotel were replaced by hundreds of speeding scooter boys who travelled in the coach’s slip stream, taking advantage of the opportunity to beat the gridlock. On every corner, locals gathered to greet the European champions with jeers. It made for quite the spectacle.

The game, too, had plenty of energy. Carlo Ancelotti is not the cliched defensive Italian coach. He gambles, he attacks and Napoli were often set up 4-2-4 in an attempt to negate Liverpool’s marauding full-backs. In the first-half, at least, it was largely successful and while Liverpool had two more pops at goal than they did on their last visit – when they had none in possibly the most disappointing performance of their 2018-19 European campaign – it was Napoli who seized the early initiative. 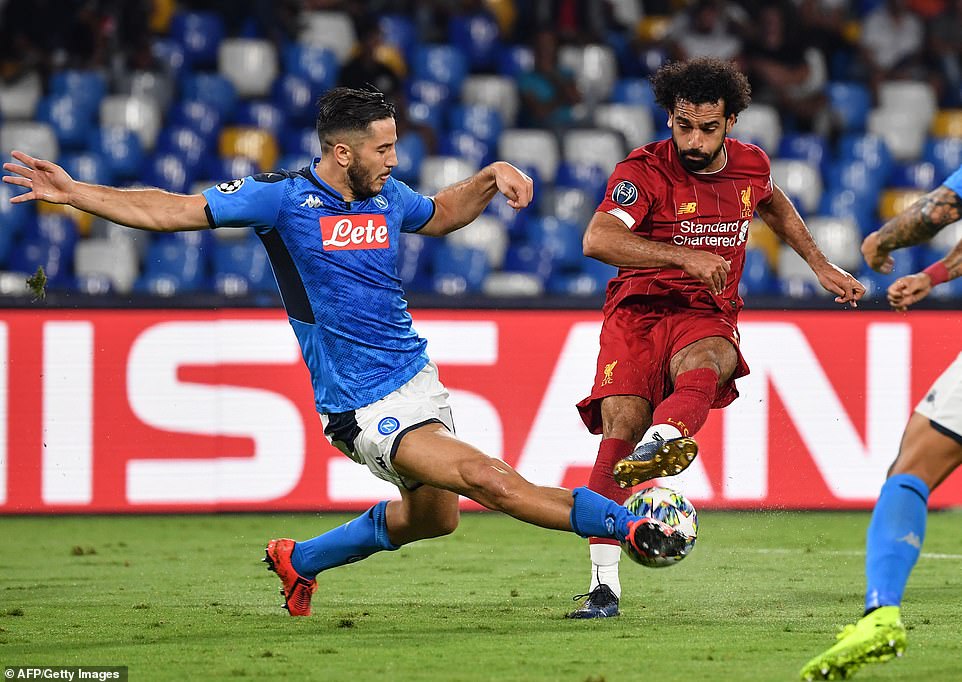 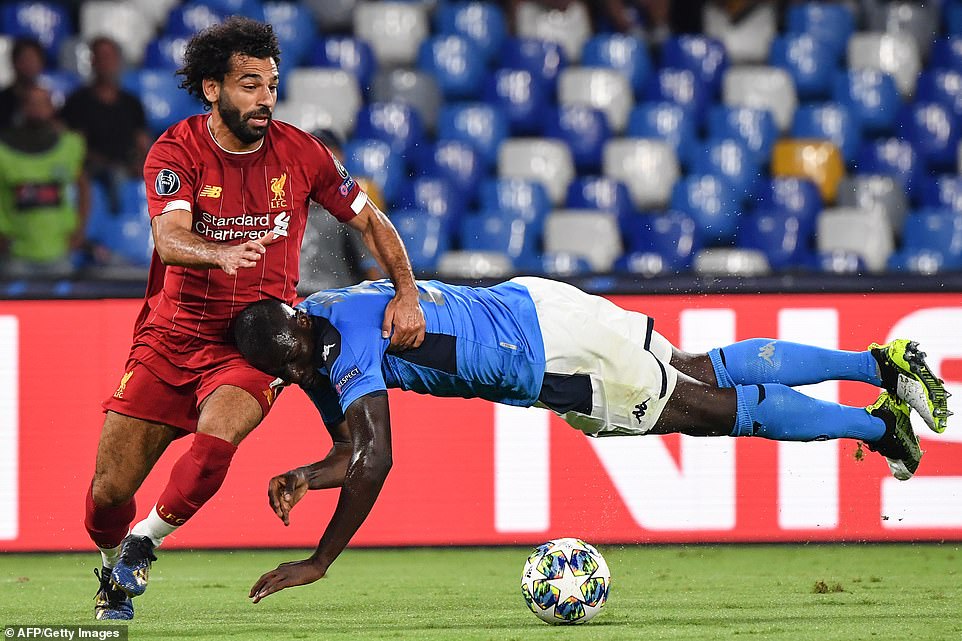 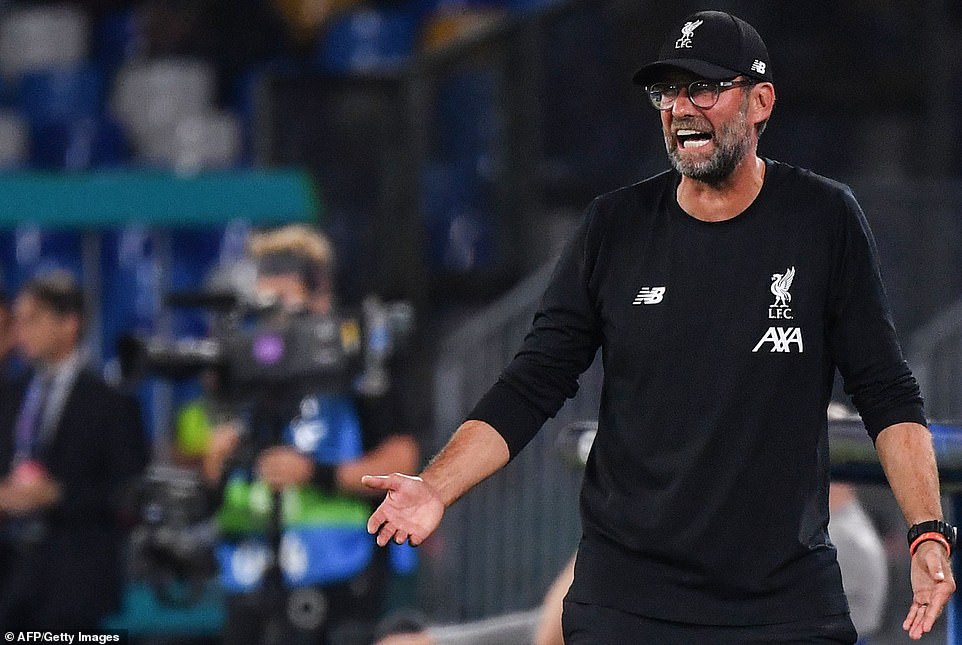 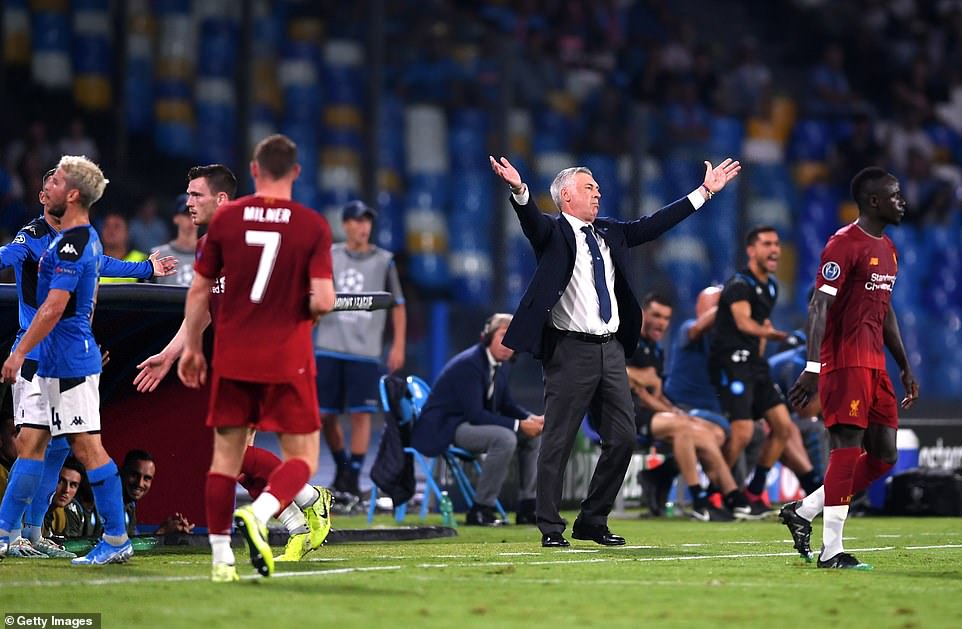 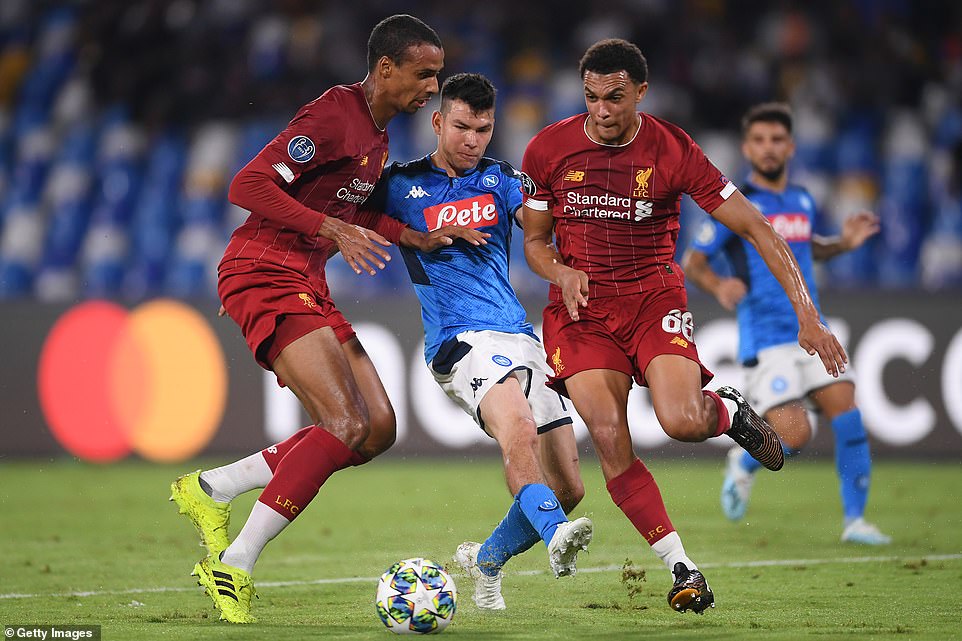 Indeed, they had the ball in the net after just seven minutes, having forced an excellent double save from Adrian, still deputising well for the injured Alisson Becker. Both stops came from shots by midfielder Fabian Ruiz, bought from Real Betis for £30m two summers ago. His first was kept out by Adrian, but the ball returned to the feet of the Spanish international, who tried again. Adrian was equal to it once more, but this time the deflection bounced up and was headed in by Hirving Lozano, late of PSV Eindhoven and too much of a handful for Tottenham in previous Champions League campaigns. He headed in to the unguarded net with Adrian stranded, but a flag was instantly raised and play had restarted before VAR even completed its cursory check.

Soon after, another opportunity for Ruiz when Callejon struck a deep cross which should have found the target. Instead he volleyed it back across the penalty area, in what was either a miskick or a misread of the best plan. After half-time, Adrian was needed again, making an excellent save from Mertens at the far post.

Liverpool took longer to get into the game but, when they did, forced a save from goalkeeper Alex Meret. Possession was lost cheaply by Napoli in midfield, and Jordan Henderson picked out Sadio Mane with a neat pass, Meret to the rescue at the near post. He would have been powerless, however, had Roberto Firmino been a little more accurate with a header four minutes before half-time. James Milner – who ran farther than any other player in the first-half, on a very sticky night in Italy’s south – played the ball in, and Firmino had a free header which he steered the wrong side of the far post. Meret wouldn’t have been able to reach it, with a tad more precision. 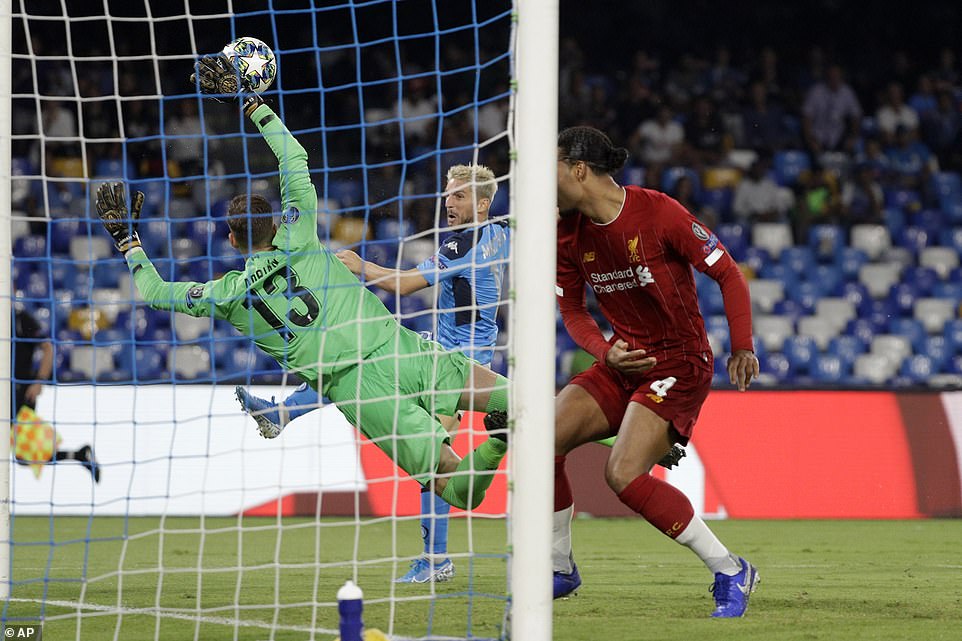 Shortly after the start of the second half, Napoli thought they had taken the lead but Adrian did brilliantly to deny Mertens 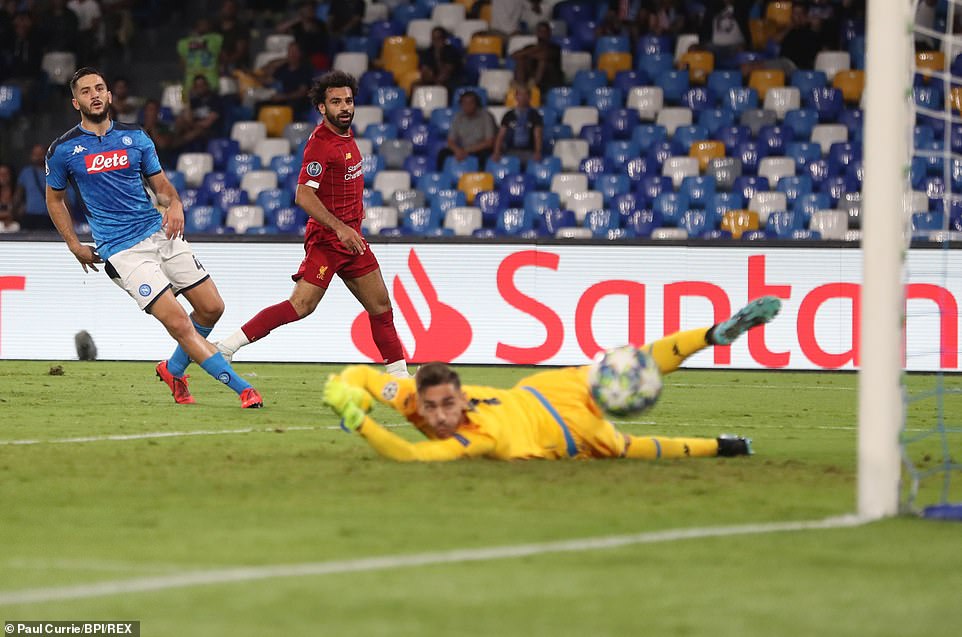 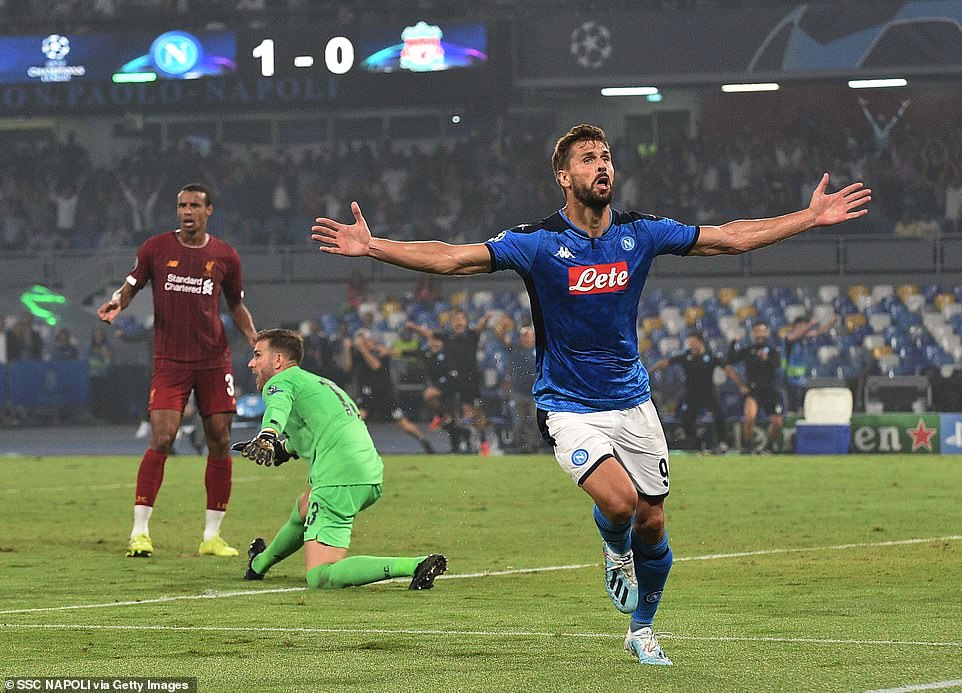 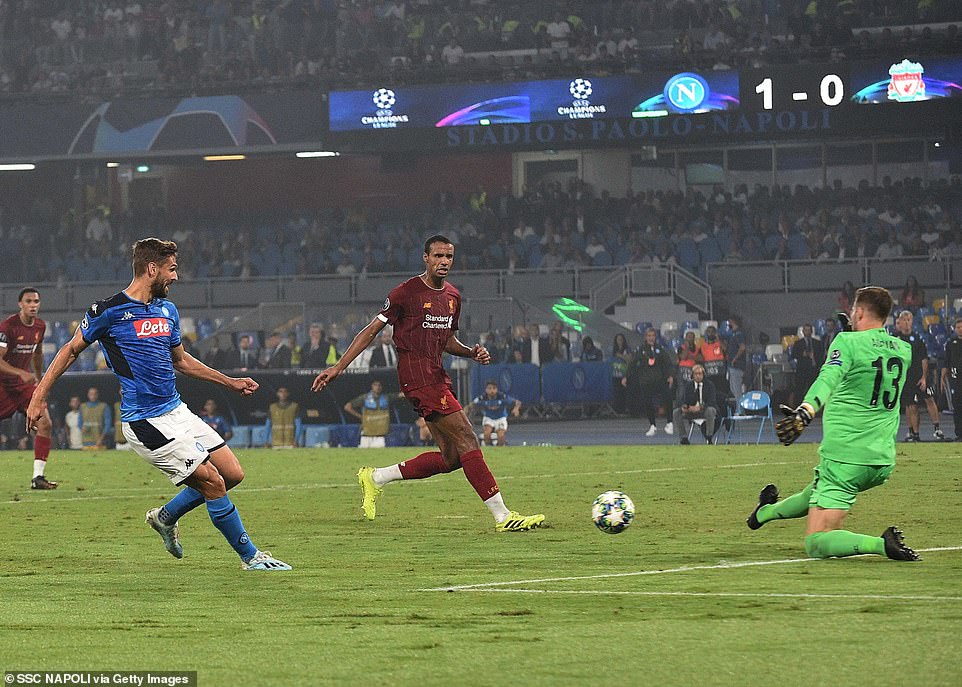 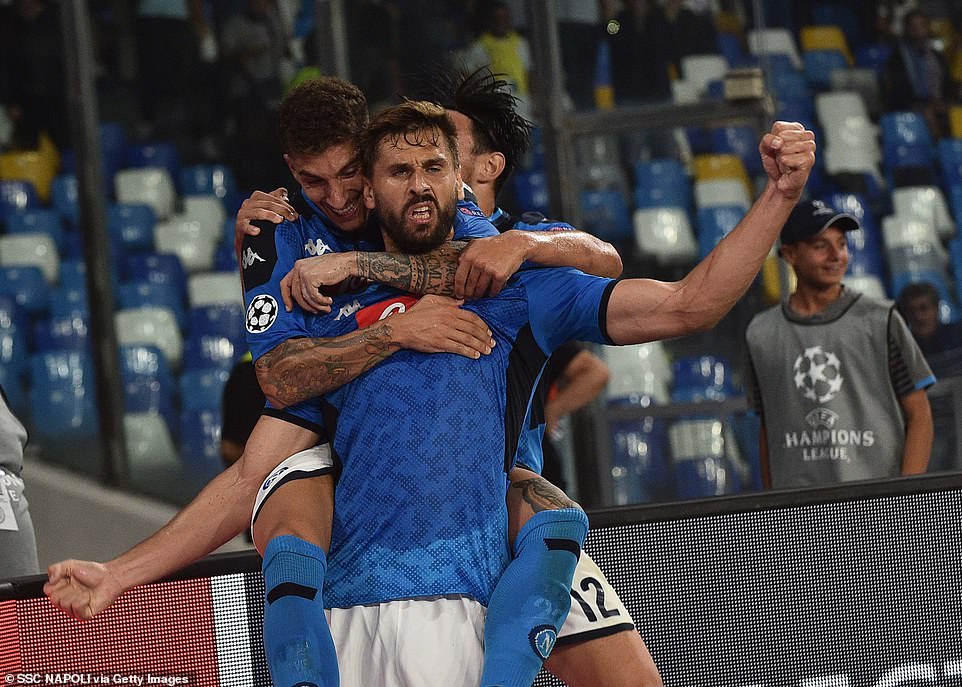