Narcissistic people are more likely to be viewed positively by their bosses due to their high energy levels and tendency to take on leadership roles, new study finds

Calling someone a narcissist is generally insulting, but a new study suggests the label could be desirable for employers.

Researchers at Huazhong University of Science and Technology in Wuhan, China have linked narcissistic personality traits to higher energy levels in the work place and were more well regarded by their supervisors.

People with more narcissistic personality traits also tended to take leadership roles more readily than other workers, whether asked or not, according to the researchers, led by Huazhong University’s Kong Zhou.

‘We argue that narcissistic employees usually have stronger internal motivations to release the potential energy stored in their bodies as to prove they are better than other employees,’ the team writes.

‘Hence, we predict that narcissistic employees may be more energized to exhibit taking-charge behavior in the workplace,’

The team based their research on interviews with 312 employees at a Chinese manufacturing company, according to a report in PsyPost.

The employees were each given a survey that asked them to rate how relevant a series of statements were to their own lives.

These included statements like ‘I have been compared to famous people,’ and ‘When I am at work I feel vital and alive.’ 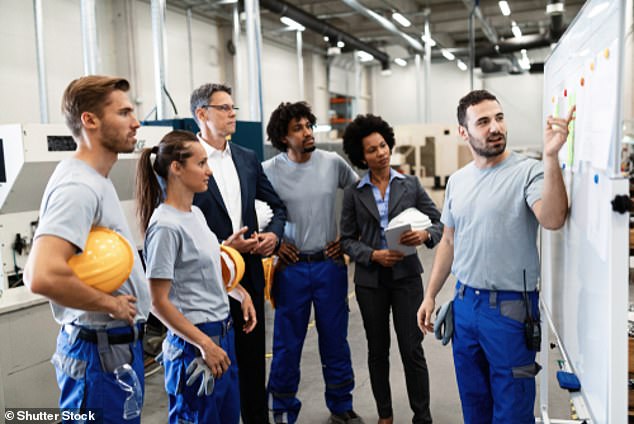 Work place narcissists also tended to seek out leadership roles, which the researchers claim could be motivated by their need to be seen as esteemed people by their peers

The researchers assigned varying degrees of narcissism to each employee based on their answers, and compared their responses to how their work supervisors viewed them.

Surprisingly, they found that people who exhibited more narcissistic personality traits tended to be more highly regarded by their superiors, and were more likely to be seen as taking the initiative in the work space.

According to the team, this dynamic could be fueled by the desire for status and esteem that many narcissists have.

TOP TIPS FOR DEALING WITH NARCISSISTS

1. Always remark on what they are doing well. Give them compliments without mocking them as it avoids them making demeaning comments.

2. Everything you say to them must include something positive. If you need to remind them about a deadline remember to add something like ‘I can’t wait to read what you’ve done’.

3. Pay them attention. If you don’t give them enough they will think you are criticising them. Remember to always respond to their emails and correspondences quickly as it makes them think you respect them.

4. Don’t act out of anger. You risk being bullied by them if you get on their bad side. Catering for them is a necessity because the alternatives are even worse.

5. Reflect the person’s emotions back to them. Remember that narcissism is based on insecurity. Remind them that work is challenging for everyone and don’t single them out as struggling with something.

The researchers suggest narcissistic employees ‘might have more psychological resource (e.g., perceptions of superiority over others and excessive demand for admiration) to make themselves feel energized at work.’

Past research has shown narcissists are also less likely to experience depression and exhibit higher levels of mental toughness.

A 2019 study from Queen’s University Belfast claimed narcissists were ‘horrible but happier’ people.

‘If a person is more mentally tough they are likely to embrace challenges head-on, rather than viewing them as a hurdle,’ Dr Kostas Papageorgiou of Queen’s University Belfast said in a 2019 interview.

‘While of course not all dimensions of narcissism are good, certain aspects can lead to positive outcomes.’

People who doubt the moon landings are more likely to be selfish and attention-seeking, according to a recent study.

Over the course of three online-based studies, researchers at the University of Kent showed strong links between the belief in conspiracy theories and negative psychological traits.

Writing in the journal Social Psychological and Personality Science, the team explained: ‘Previous research linked the endorsement of conspiracy theories to low self-esteem.’

In the first study, a total of 202 participants completed questionnaires on conspiracy beliefs, asking how strongly they agreed with specific statements, such as whether governments carried out acts of terrorism on their own soil.

Alongside this, they were asked to complete a narcissist scale and a self-esteem assessment.

The results showed that those people who rated highly on the narcissism scale and who had low self-esteem were more likely to be conspiracy believers.