A teenager collapses with sudden muscle paralysis when she laughs as a complication of narcolepsy.

Jordan Coomer, 15, is at risk of crumpling to the ground for around half a minute any time she giggles. Her body is frozen but her brain is still conscious.

The unusual ailment, called cataplexy, was discovered shortly after her narcolepsy, a brain disorder which causes a person to randomly fall asleep multiple times a day.

Doctors have recorded Jordan having 20-minute naps every two hours, which can happen during classes or when she is eating.

Narcolepsy can be onset by a viral infection – and Jordan remembers having a week-long throat infection in February 2016, a year before her diagnosis.

The two conditions have taken their toll on Jordan, whose persistent napping was initially brushed off as part of puberty.

Jordan Coomer, 15, collapses when she laughs, a condition called cataplexy 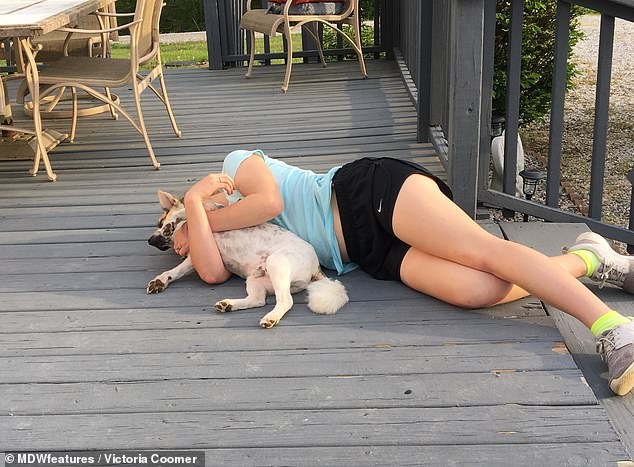 Cataplexy is a complication of narcolepsy, a brain disorder which causes a person to randomly fall asleep multiple times a day. Pictured, Jordan sleeping on her patio 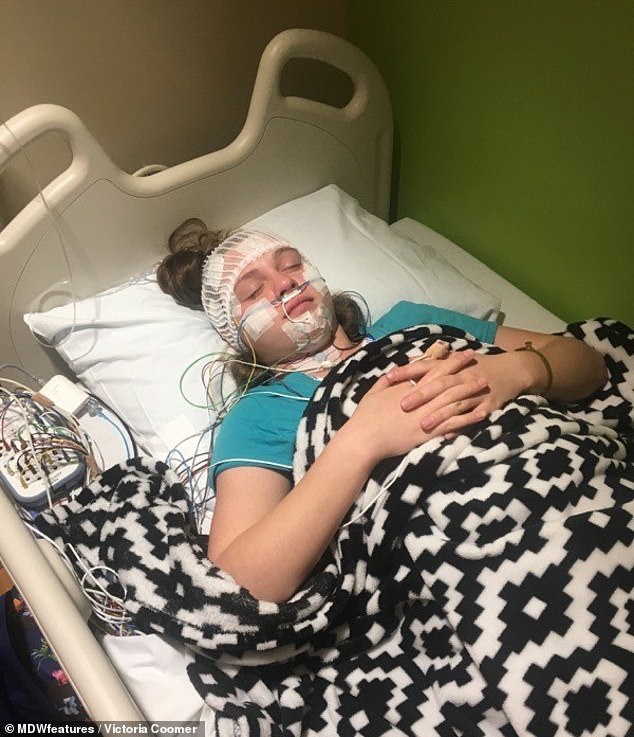 Jordan was taking to different doctors for months, who run all kinds of tests on her. Nobody could figure out what was wrong with her. She is pictured having a test for sleep apnoea

Jordan, from Indiana, said: ‘Adjusting to the disease has been hard; at first I was very upset and just couldn’t figure out why it had to be me.

‘I have dreams and want to do so much, and to learn that you have a disease that will ultimately affect the rest of your life and what you do was extremely hard.

‘Over time, though, I’ve come to accept it and embrace it.’

Jordan’s problems started in the summer of 2016 when she started sleeping more often than normal.

Her mother, office assistant Victoria Coomer, 50, said: ‘We attributed it to just growing up, but it continued to get worse.

‘She was falling asleep in class, at the table when I was talking to her and when she was doing her homework.

‘Any time that she was still, or it was quiet she would fall asleep. Her face would get droopy, she would slur her words and her jaw would go slack and she was having hallucination and nightmares.’

People with narcolepsy have excessive, uncontrollable daytime sleepiness because they cannot control their sleep-wake cycles. 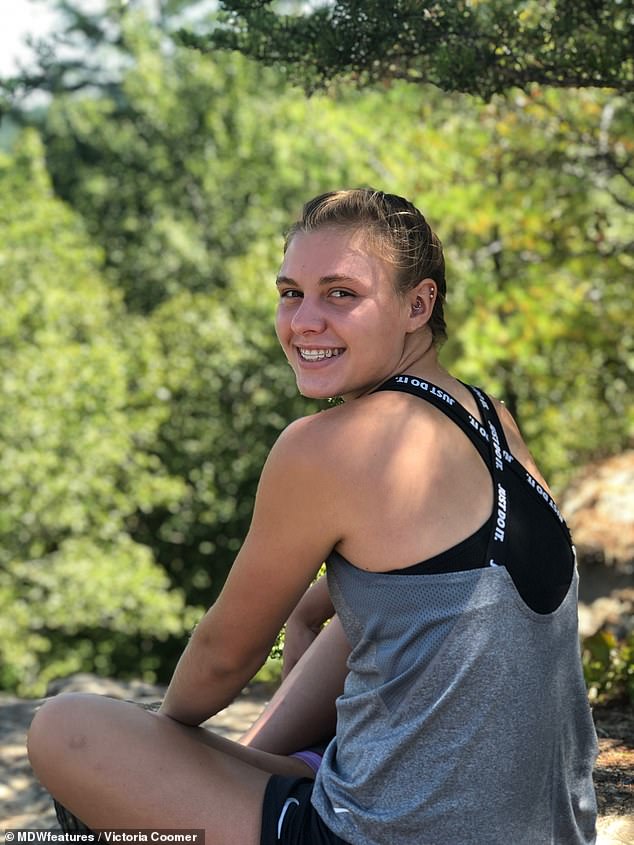 Jordan is at risk of crumpling to the ground for around half a minute any time she giggles. Her body is frozen but her brain is still conscious 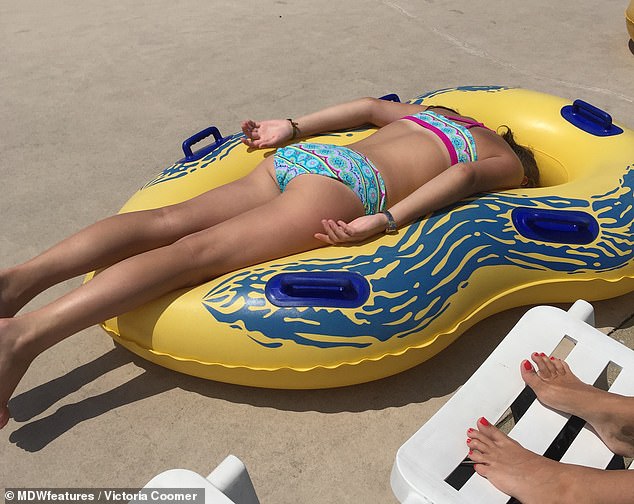 Doctors have recorded Jordan having 20-minute naps every two hours, which can happen during classes or when she is eating. She is pictured asleep on the beach 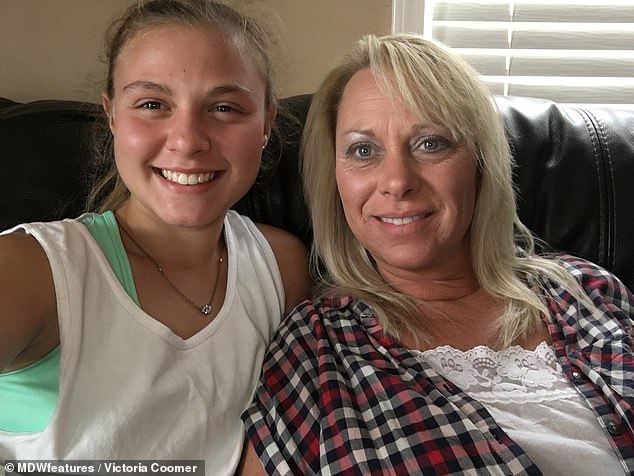 Jordan’s mother, office assistant Victoria Coomer, 50 (pictured), said: ‘We attributed it to just growing up, but it continued to get worse’

Narcolepsy is caused by lack of the brain chemical hypocretin, which regulates wakefulness.

This is thought to occur due to the immune system attacking cells that produce hypocretin or receptors that allow it to work.

It can also be triggered by hormonal changes, stress and infections.

Sufferers are advised to have frequent naps throughout the day and stick to a strict bedtime routine.

Medication can help to reduce daytime sleepiness and prevent loss of muscle control.

The exact cause of narcolepsy is unclear. The NHS say an infection, such as swine flu, hormonal changes such as in puberty and major stress are linked to the onset.

Ms Coomer said: ‘It continued to get worse as time went on, to the point where she would fall asleep during her classes at school, at the table while they were eating their dinner and while she was doing her homework.

‘She would cry sometimes because she wanted to do things, but she just did not have the energy to do it. She was sleeping her whole life away.’

Mrs Coomer continued: ‘The spells would vary; she would sleep from the time she got home from school until it was her bedtime and then go back to sleep if I would let her.

‘I would have to wake her up to eat or do her homework and then she would fall asleep while doing her homework or eating. If we were in the car for even five minutes she would go to sleep.’

Jordan was taken to different doctors for months, who ran all kinds of tests on her. Nobody could figure out what was wrong.

Ms Coomer said: ‘They kept telling us she would outgrow it and it was just because she was growing.

‘I finally decided to take her to a sleep doctor but because of her age, nobody would see her, so I had to find a paediatric sleep specialist.

‘There was only one where we live, and he was still fifty minutes away, so it took us two months to see him.’

In January 2017, Jordan saw a paediatric sleep specialist, who told her to wear a watch-like device that would monitor her sleeping patterns. 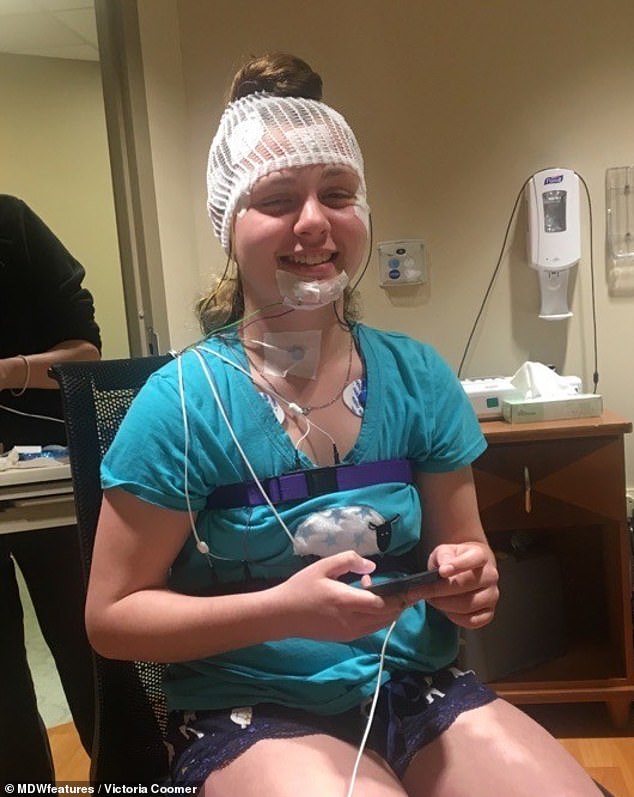 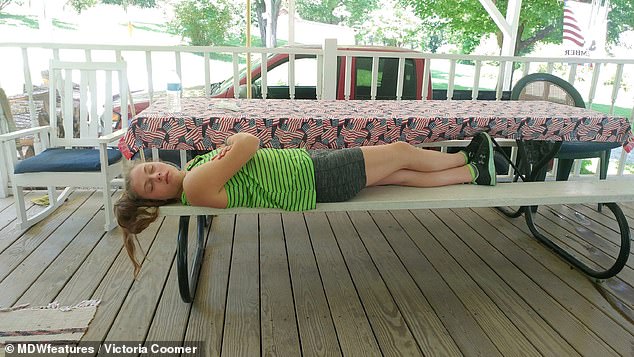 Ms Coomer said: ‘She also needs to nap when she can even if it is for five or ten minutes’ 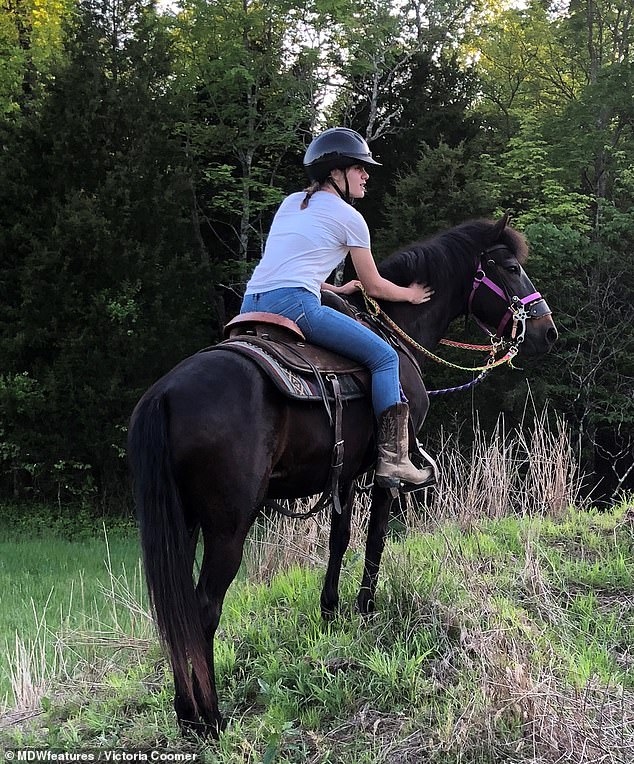 Jordan, who manages her conditions with medication, said: ‘I play sports, I ride horses, I’m a straight-A student, I hang out with friends, and I live how I want to. I’m not ashamed of my disease and I never will be. It’s a part of me and it’s who I am’

Cataplexy is a symptom of narcolepsy, a long-term condition causing problems with normal patterns of sleeping and waking.

Cataplexy is the sudden, temporary muscle weakness or loss of muscular control.

Cataplexy attacks are usually triggered by an emotion, such as excitement, laughter, anger or surprise.

Attacks can last from a few seconds to several minutes.

Some people with narcolepsy have cataplexy attacks once or twice a year, while others experience them several times a day.

In an attempt to avoid attacks, some people may become emotionally withdrawn and socially isolated.

She wore the watch 24-hours-a-day for a month and re-visited the doctors in March 2017.

The doctors was shocked by the results and decided to do a sleep study, where Jordan was hooked up to wires that would monitor her sleeping patterns throughout the night.

The next morning, she did a daytime study. Jordan was having 20-minute naps every two hours over an eight-hour period.

Three days later, the family got a phone call from the doctor who told them that Jordan has narcolepsy, a long-term neurological disorder that involves a decreased ability to regulate sleep-wake cycles.

Ms Coomer said: ‘It took almost ten months from the time the symptoms started before we actually got the diagnosis of what was wrong with her.

‘When we received her diagnosis, we were both scared and relieved; we were relieved that we finally had a diagnosis for what was wrong but also scared because we didn’t know what this would mean for her in the future.

‘My emotions overcame me, and I started crying. The doctor told us that it is manageable and that she could still lead a normal life.’

In June 2017, Jordan and her family were all laughing about something when suddenly she collapsed on the ground and lay there for 20 to 30 seconds before bursting into tears.

She has had other similar occurrences when she would laugh, and her muscles would go weak.

The doctors then diagnosed cataplexy, a medical condition in which strong emotion or laughter causes a person to suffer sudden physical collapse though remaining conscious. 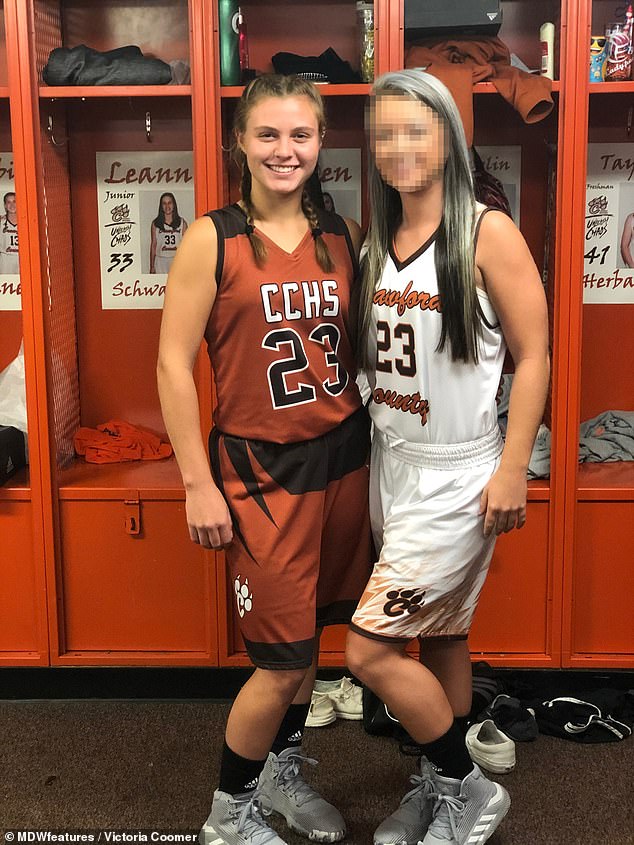 During attacks of cataplexy, the person stays fully conscious but often feel ‘locked’ inside their body. Jordan is pictured with a friend during a basketball game

Ms Coomer said: ‘He told us she definitely had narcolepsy with cataplexy and there is no cure for it and that she would have it for the rest of her life.’

Cataplexy attacks range in severity, with mild episodes resulting in drooping of facial muscles or eyelids, slurred speech and double vision. More severe attacks may involve a total collapse of the body.

They generally last less than two minutes, and they may only last a few seconds, though some people have repeated attacks of cataplexy which persist for up to 30 minutes.

During both mild and severe attacks, the person stays fully conscious but often feel ‘locked’ inside their body.

Jordan now manages her conditions with medication, which has reduced how much she has to sleep.

Ms Coomer said: ‘It is a process of trial and error to get the correct dosage that works the best. She also needs to nap when she can even if it is for five or ten minutes.

‘If she is taking a test, she sometimes falls asleep but now her teachers and friends know if they see her nodding off to just touch her shoulder lightly and she will wake up.

‘They know not to yell at her or startle her. Some teachers will let her sleep until she wakes up if she isn’t missing anything.’

Jordan is an excellent student; she makes straight As and is number four in her class, Ms Coomer said.

She added: ‘I am so proud of her; she could have just given up and used it as an excuse to not do well in school or not play sports, but she didn’t, she works hard and does everything she wants to do.

‘Every year at the beginning of school, I personally talk to each one of her teachers and let them know about her diagnosis and what to do if she nods off.

‘They all have been wonderful with her and have never made her feel embarrassed or held it against her.’

It is not clear yet if Jordan will be able to drive, but she said up until now, she hasn’t let her condition affect her life.

She said: ‘There are still so many things I can’t even explain or understand, but with time I’ll get it. One of the most important things to me is not letting the disease control my life and what I do.

‘I play sports, I ride horses, I’m a straight-A student, I hang out with friends, and I live how I want to. I’m not ashamed of my disease and I never will be. It’s a part of me and it’s who I am.’