By Shive Prema and Rebecca Spellman For Daily Mail Australia

A second shark sighting in a Sydney lagoon has sparked fears that a monster great white has been flushed into the popular swimming spot during a wild storm.

The Northern Beaches Council announced a shark had been sighted at Narrabeen Lagoon on Wednesday morning.

‘This morning we received a report of a shark in Narrabeen Lagoon near the bridge at Pittwater Road,’ council CEO Ray Brownlee told Daily Mail Australia.

‘Our Beach Services Team is investigating and warning signs are being erected at key points around the lagoon as a precaution. We ask the community to be aware.’

One of the ominous signs read: ‘Shark sighted today. Enter water at your own risk.’

It comes just three days after an ominous fin was spotted in the same lagoon as the city endured its heaviest downpour in 22 years.

A ominous shark fin was captured on video swimming through Narrabeen Lagoon in Sydney’s Northern Beaches on Sunday. On Wednesday, there was a second shark sighting, prompting the local council to erect warning signs around the popular swimming spot

Despite the warnings, young families and holidaymakers from a busy caravan park across the road have been seen swimming in the water every day.

One group was filmed using a homemade slip and slide to drop into the water on Monday, just metres away from where the fin was spotted on Sunday. 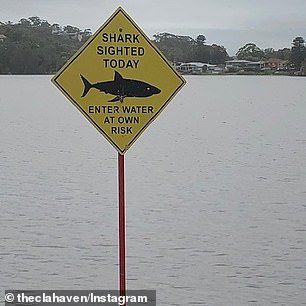 Several signs have been erected around the lagoon. One read: ‘Shark sighted today. Enter water at your own risk’

Young children were also filmed surfing waves formed at the

The original shark footage, which appeared to show a dorsal fin breaching the waters in the lagoon just metres from the shore, sparked debate online.

Most viewers were convinced it was indeed a shark, but others were sceptical and claimed the fin was more likely a floating tree branch or surfboard.

It’s not the first time a shark has been spotted in the area.

There have been 12 sightings in the Narrabeen/North Narrabeen area in the last four years, according to the Dorsal Watch website dedicated to shark sightings.

Among them was a one metre bull shark reportedly spotted at the entrance of Narrabeen Lagoon in April 2016.

‘I saw its dorsal fin chasing a school of what looked like poddy mullet from where I was fishing on the sandbank,’ they told the Dorsal Watch website at the time.

The department stated at the time aerial contractors spotted ‘a large figure’ in deep water near Narrabeen shark nets but were unable to identify it, the website stated. 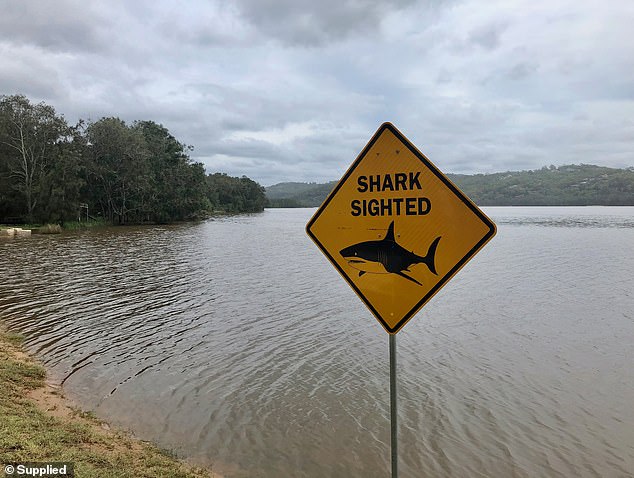 Another sign warning swimmers that they may be sharing Narrabeen Lagoon with sharks. Despite the warnings, young families and holidaymakers from a busy caravan park across the road have been seen swimming in the water every day

Fisherman Stephen Burleigh claimed he spotted a shark dragging a duck under the water in the lagoon in 2007.

‘There were half a dozen ducks in the water. I saw four of them moving very quickly to the side but the shark got one and dragged it under the water, five metres under,’ he told The Sydney Morning Herald at the time.

‘I was worried if there were any children in the water. I stepped back and said ”I’m not fishing here any more”.’

The lagoon is opened up to the ocean during heavy rainfall in a bid to reduce the impact of flash flooding on waterfront properties in the suburb. 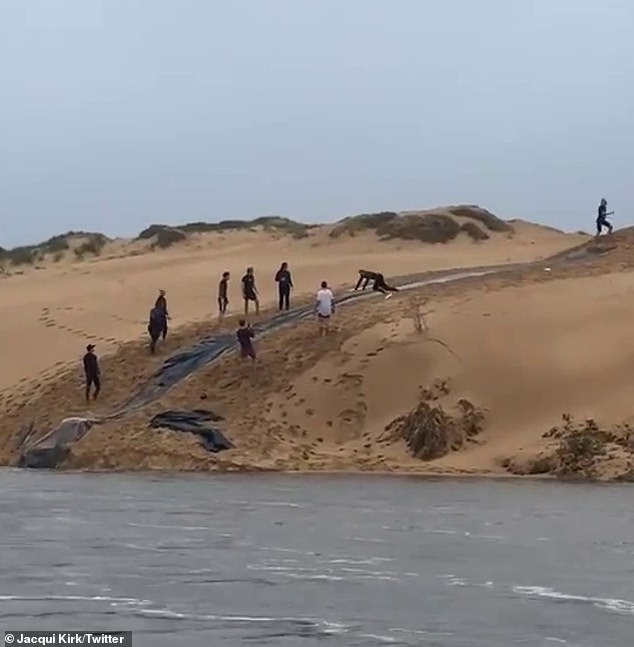 One group was filmed using a homemade slip and slide to drop into the water on Monday, just metres away from where the fin was spotted on Sunday