Immigration raids touted by President Trump as ‘very successful’ are enjoying majority support from the public, as the president looks to use immigration issues as a wedge issue once again in 2020.

Trump touted ICE raids that were to begin last Sunday, after earlier hyping a nationwide enforcement push that got delayed.

The raids are supported by Trump’s base, with 85 per cent supporting, them, according to a Politico / Morning Consult poll. They also won narrow majority support in the poll – with 51 per cent in favor, and 35 per cent against.

Of supporters, 21 per cent backed them ‘strongly’ with 19 per cent somewhat supportive. Thirteen per cent didn’t know or had no opinion.

51 per cent of Americans favored immigration raids, according to a new poll

However even among Democrats, the raids enjoyed 29 per cent support.

The show of support for the controversial raids come as the Trump campaign is investing heavily in online ads focusing on immigration.

The president has hyped several instances of planned deportations – in the case of Sunday’s raids using language that exceeded what was readily noticeable from outside the field.

Media stories in advance of the weekend focused on families planning to deal with a sudden deportation, and included warnings from prominent Democrats including Hillary Clinton and Nancy Pelosi instructing not to answer the door if law enforcement lacks a judicial warrant. 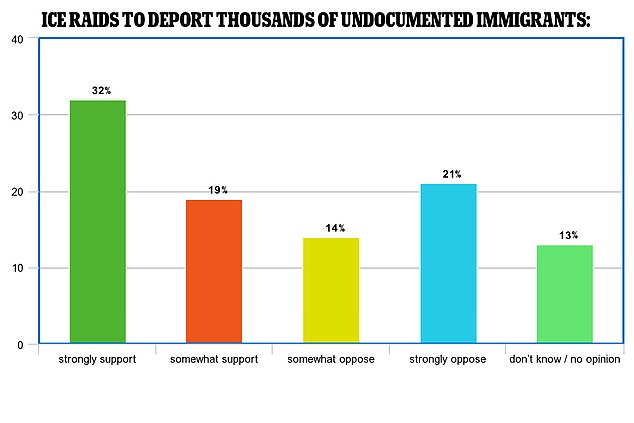 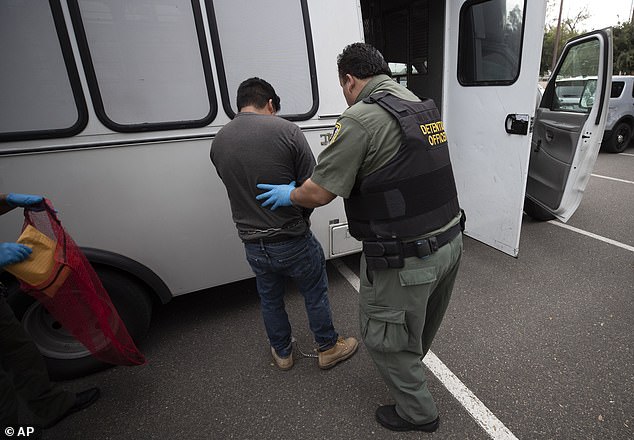 In this July 8, 2019, photo, a U.S. Immigration and Customs Enforcement (ICE) officers transfer a man in hand and ankle cuffs onto a van during an operation in Escondido, Calif. 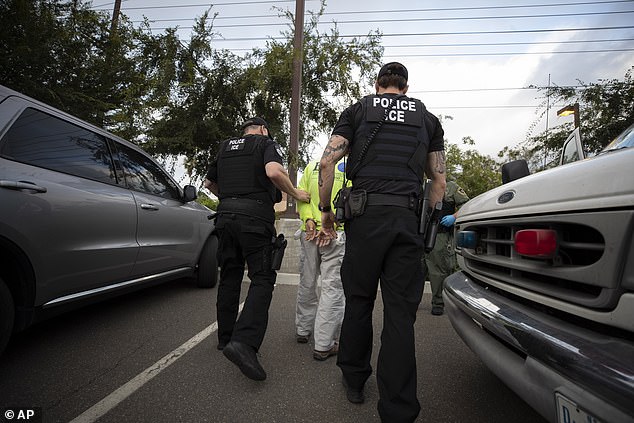 According to the poll,  34 per cent registered hearing ‘a lot’ about the planned ICE raids, with another 33 per cent hearing something about it.

Trump indicated Monday he had spoken to ICE officials Monday for an update. ‘We had many people, it was a very successful day,’ he said. Then he added that ‘you didn’t see a lot of it,’ but indicated more would be coming. ‘I’m not sure they should be telling you, but it was a lot,’ he said.

‘Many, many were taken out on Sunday; you just didn’t know about it,’ he said.

The New York Times reported that many of the planned raids on 2,000 immigrants may have been foiled by targets failing to answer the door, online postings, and other methods.  Immigration advocates did not report getting word of large-scale raids.