NASA and the European Space Agency are teaming up on a $14 billion project to bring a piece of Mars back to Earth.

The agencies outlined the ambitious plan in a virtual meeting this week that involves sending up three different spacecraft – two of which will rendezvous in Mars orbit.

The first step in July will involve NASA launching its Perseverance rover, which is set to land on the Martian surface’s Jezero crater next February.

Perseverance, as it was finally christened last month, will roam the surface of the planet, collecting dust and rock samples in test tubes.

The agencies will then launch a pair of spacecraft to Mars in 2026 – one of which will collect the sample from Perseverance on Mars when it lands in 2028.

This spacecraft will then launch the samples into Mars orbit for the third spacecraft to collect and return to Earth in 2031.

If the plan works, scientists will finally get the very first hands-on analysis of samples of the planet in around 11 years’ time.

When Perseverance lands at Jezero Crater on February 18, 2021, it will be the first spacecraft in the history of planetary exploration with the ability to accurately retarget its point of touchdown during the landing sequence

‘This is by no means a simple task,’ said Jim Watzin, head of NASA’s Mars exploration programme in Washington DC. ‘But we have kept it as simple as possible.’

‘What we can learn about Mars in our own laboratories is going to be fantastic,’ said Michael Meyer, lead scientist for the Mars exploration programme at NASA headquarters in Washington DC.

The full plan, as reported by Nature, begins when Perseverance lands in the Jezero crater, which is home to an old river delta that could reveal signs of ancient life.

As the six-wheeled lander Perseverance drives around for miles, it will scoop up enough material to fill around 30 geological sampling tubes. 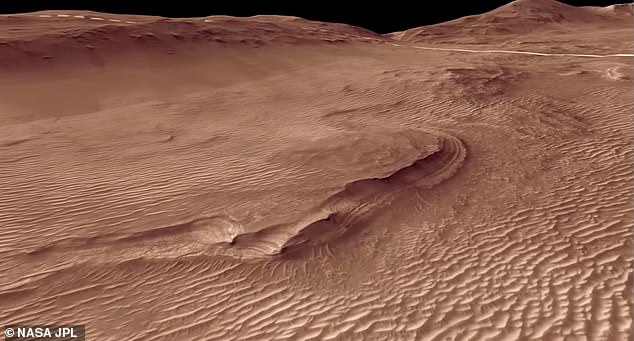 In 2026, NASA and ESA will launch two more spacecraft that would reach Mars in 2028.

This rocket will blast off – in the process becoming the first object launched from the surface of Mars – and place the container into Martian orbit, meaning it will essentially be floating in space.

At this point, the third and final spacecraft involved in the tricky operation will manoeuvre itself next to the sample container, pick it up and fly it back to Earth.

Providing its re-entry into the Earth’s atmosphere is successful, it will plummet to the ground at a military training ground in Utah in 2031.

NASA will build the sample-retrieval lander and the Mars ascent vehicle, while the ESA is tasked with the all-important third phase of the task – building the spacecraft that gets the samples home. 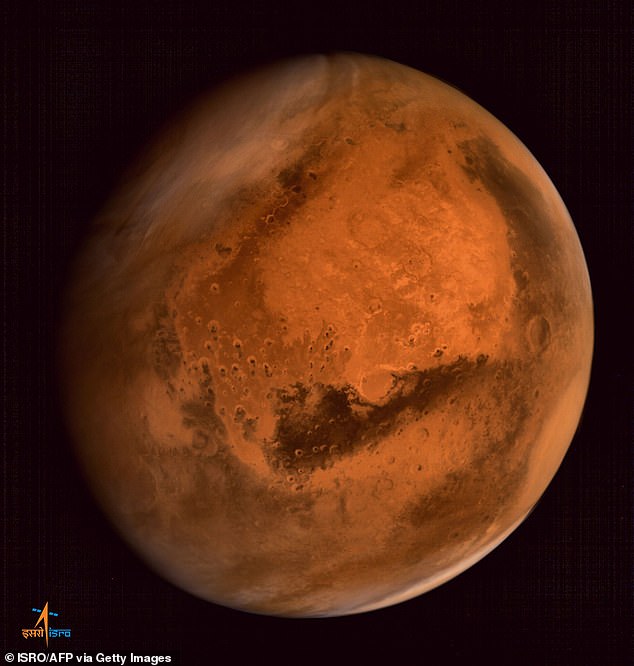 Nature reports that ESA officials committed to the plan at a ministerial meeting last November.

Regardless of whether it goes ahead or is even successful, NASA is launching Perseverance this summer.

Perseverance is described by NASA as a ‘robotic scientist’ weighing just under 2,300 pounds (1,043 kilograms).

It will search for signs of past microbial life, assess Mars’ climate and geology, collect samples and help pave the way for human exploration of the Red Planet.

The launch period for the rover – which NASA is adamant will remain unchanged despite the coronavirus pandemic – extends from July 17 through to August 5.

The rover’s name was picked from a ‘Name the Rover’ essay contest that received 28,000 entries from school children.

The name was revealed in March during a live streaming and was chosen by seventh grader Alex Mather whose winning essay compared the rover to the human race. 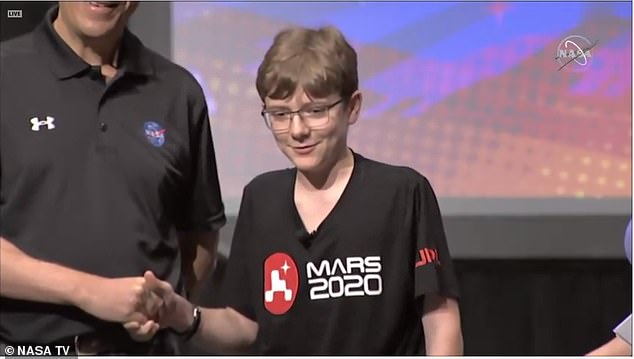 The name was revealed on Thursday during a live streaming and was chosen by seventh grader Alex Mathers (pictured) who’s winning essay compared the rover to the human race. ‘The human race will always persevere towards the future,’ he said while reading his essay aloud in front of thousands of people’

‘Curiosity. InSight. Spirit. Opportunity,’ Mather wrote. ‘If you think about it, all of these names of past Mars rovers are qualities we possess as humans.’

‘We are always curious, and seek opportunity. We have the spirit and insight to explore the Moon, Mars, and beyond.

‘But, if rovers are to be the qualities of us as a race, we missed the most important thing. Perseverance.’

Perseverance, which was built at NASA’s Jet Propulsion Laboratory in Pasadena, California, is now at the Kennedy Space Center in Florida for final preparations.