Nasa has announced a series of new tests for its 1,100mph (1,770kph) supersonic aircraft tipped to be the follow-up to the legendary Concorde.

Nasa will fire off the aircraft’s ‘quiet’ sonic booms over a small city in Texas this year in a bid to gauge public reaction to the dampened supersonic thuds.

The agency said the first full test flights of LBFD, which could one day fly from London to New York in just three hours, are scheduled for 2022.

Dubbed ‘son of Concorde’ by aviation fans, the vehicle could lead to the first supersonic aircraft to carry commercial passengers since the iconic Anglo-French jet was decommissioned 15 years ago.

Nasa has announced a series of new tests for its 1,100mph (1,770kph) supersonic commercial airliner tipped to be the follow-up to the legendary Concorde. The plane (artist’s impression) aims to cut out the noise associated with supersonic travel

Before the aircraft takes to the skies, Nasa is investigating whether members of the public are put off by the noise produced by LBFD when it breaks the sound barrier.

Tests scheduled for November will see an F-18 fighter jet conduct a dive manoeuvre off the shores of Galveston, Texas – an island city near Houston.

The plane will dive from almost 50,000 feet (15,200 metres), briefly going supersonic and firing off the sound likely to come from LBFD aircraft.

The noise, which Nasa calls a ‘sonic thump’, should sound more like a car door slamming as opposed to the booms produced by existing supersonic aircraft.

The agency will measure the sounds using sensors on the ground while gathering public reaction through a series of surveys.

‘We won’t have a noise monitor on their shoulder inside their home. 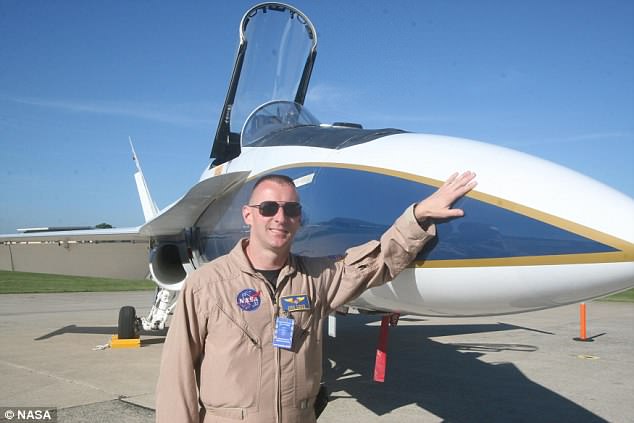 Nasa pilot Jim Less will fire off ‘quiet’ sonic booms over a small city in Texas this year in a bid to gauge public reaction to the dampened supersonic thuds. Pictured is Less with the F-18 fighter jet aboard which he will perform the research

‘But we’d like to at least have an estimate of the range of noise levels that they actually heard.’

LBFD, which Nasa is developing with Lockheed Martin’s aeronautics branch, is scheduled to make its first flight in 2022.

The project aims to cut out the noisy sonic booms that echoed above cities in the era of Concorde, while travelling at speeds of 1,100mph (Mach 1.4 / 1,700 km/h).

WHAT IS NASA’S ‘SON OF CONCORDE’ X-PLANE?

LBFD is designed to stop shockwaves triggered by the movement of air particles when an aircraft breaks the sound barrier from merging – a phenomenon that gives off the telltale sonic boom of supersonic aircraft.

Nasa hopes to reduce the sound of the sonic boom to a quiet thud, similar to the sound of thunder rumbling in the distance or a neighbour closing their door. 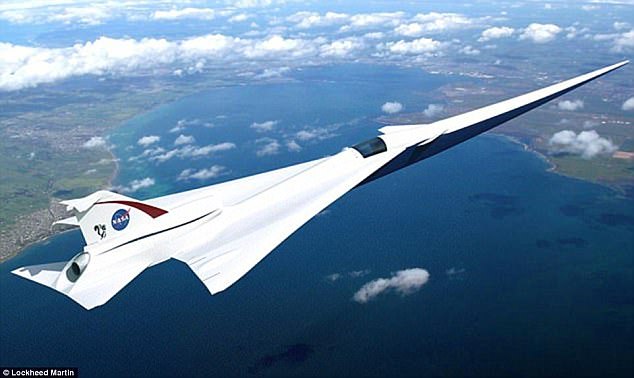 ‘With the X-59 you’re still going to have multiple shockwaves because of the wings on the aircraft that create lift and the volume of the plane,’ said Ed Haering, a Nasa aerospace engineer at Nasa’s Armstrong Flight Research Center in California.

‘But the airplane’s shape is carefully tailored such that those shockwaves do not combine.

‘Instead of getting a loud boom-boom, you’re going to get at least two quiet thump-thump sounds, if you even hear them at all.’

HOW WILL NASA REDUCE THE SOUND OF SONIC BOOMS? 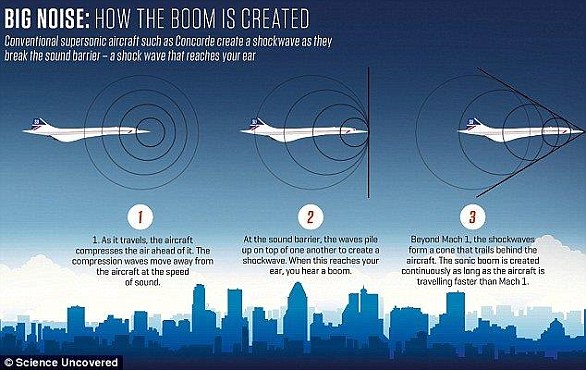 In a conventional supersonic aircraft, shockwaves from the nose, cockpit, inlets, wings and other features come together as they move through the atmosphere into strong shocks emanating from the nose and tail

Shockwaves produced by the manoeuvre will concentrate directly below the aircraft in the form of a very loud, focussed pair of sonic booms. 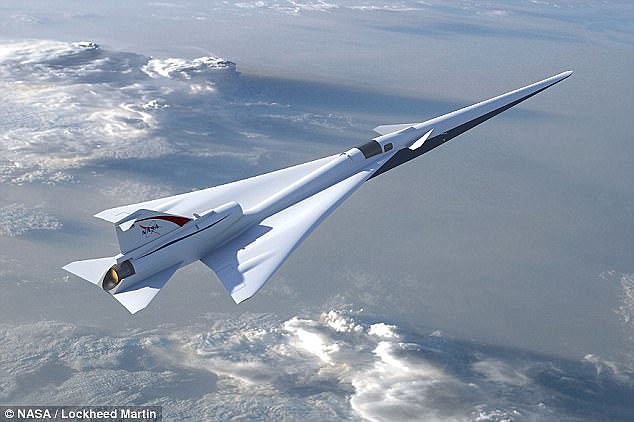 Flights conducted by Nasa in November will study the US public’s reactions to ‘quiet’ supersonic noises above their homes. Pictured is an artist’s impression of the Quiet Supersonic Transport (QueSST) low-boom flight demonstrator (LBFD)

‘The result in that area: a pair of quiet sonic booms – soft thumps, really – which people on the ground, including those Nasa researchers and resident volunteers, might barely notice, if they hear anything at all,’ the agency wrote in a statement.

Nasa’s vision for the LBFD was approved In the latest proposed US budget released by the Office Of Management And Budget In Washington, DC, in February.

It is not known what proportion of this has been allocated for the supersonic aircraft project.

Nasa is hoping to see the first flight tests take place in 2022, with public reaction tests to the final aircraft scheduled for the following year. 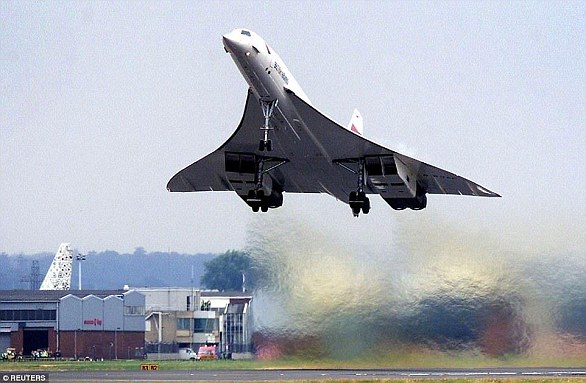 Concorde was a turbojet-powered supersonic passenger jet that was operated until 2003. It had a maximum speed over twice the speed of sound at Mach 2.04 and could seat 92 to 128 passengers