‘When your best friend achieves her lifelong dream to go to space’: NASA astronaut on space station posts amazing photo of colleague blasting off in rocket to join her

It is a friendship that is out of this world.

International Space Station astronaut captured the jaw-dropping moment that the Soyuz MS 15 spacecraft launched into space – and aboard was her best friend.

NASA flight engineer, Christina Koch, shared the snap on twitter celebrating ‘what it looks like from @Space_Station when your best friend achieves her lifelong dream to go to space’.

The craft is taking three people to the ISS: Roscosmos cosmonaut Oleg Skripochka, Hazzaa Ali Almansoori from the United Arab Emirates and Jessica Meir, NASA astronaut and Koch’s best friend – the mission has been named ‘Expedition 61’.

Koch and Meir met during astronaut training and are not being reunited in space where they will work together until February 2020.

‘What it looks like from @Space_Station when your best friend achieves her lifelong dream to go to space,’ wrote Koch in a tweet. 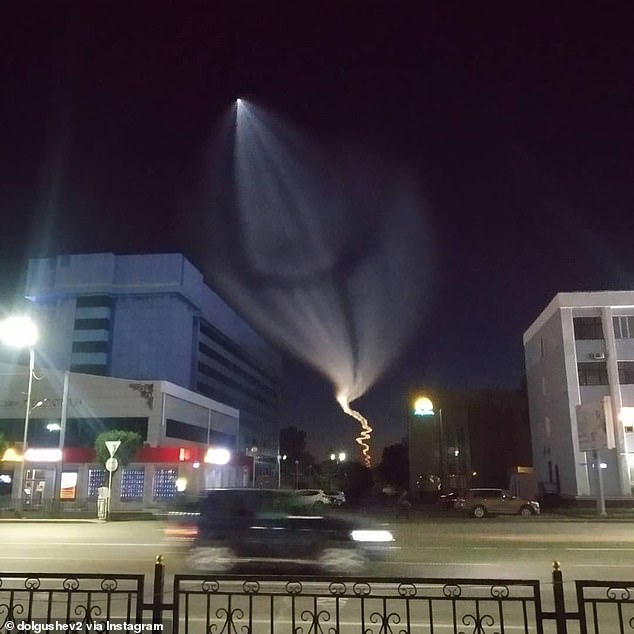 ‘Caught the second stage in progress! We can’t wait to welcome you on board, crew of Soyuz 61!’

The Soyuz successfully docked to the ISS at 3:42 p.m. EDT on the same day of the launch.

During Expedition 61, crew members will install new lithium-ion batteries for two of the station’s solar array power channels through a series of spacewalks, according to NASA.

Later in the mission, spacewalkers are scheduled to upgrade and repair the Alpha Magnetic Spectrometer (AMS), a key science instrument housed outside the station to study dark matter and the origins of the universe. 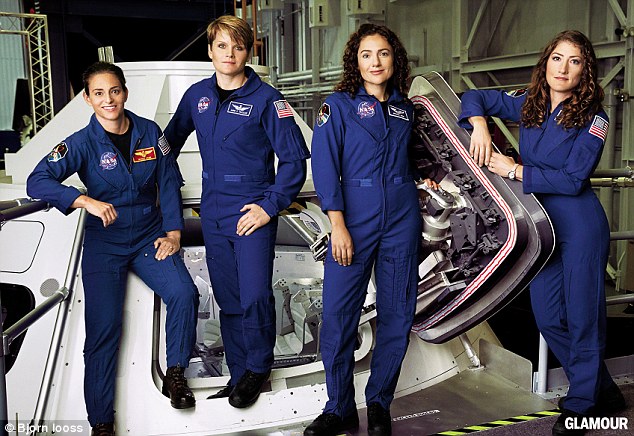 And the ISS mission hits a milestone of its own.

When Koch heads home, she will have completed 355 days in space, which is the longest single spaceflight by a woman.

Koch has shared other stunning images of her view from space in the past.

Earlier this year, the NASA astronaut shared a detailed image of the Earth transition from day into night. 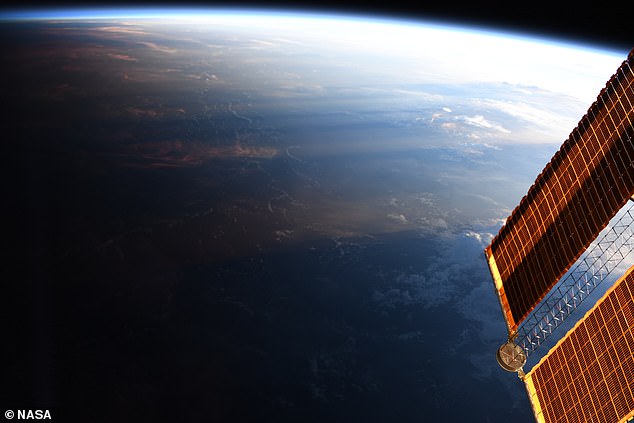 Earlier this year, the NASA astronaut shared a detailed image of the Earth transition from day into night 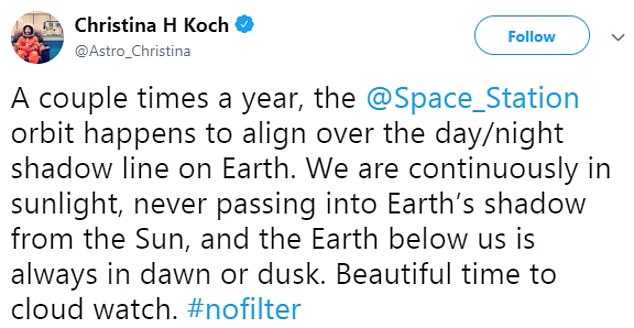 ‘A couple times a year, the @Space_Station orbit happens to align over the day/night shadow line on Earth,’ Koch wrote.

‘We are continuously in sunlight, never passing into Earth’s shadow from the Sun, and the Earth below us is always in dawn or dusk.

The International Space Station orbits roughly 220 miles above the Earth and completes one trip around our planet every 92 minutes, according to NASA.

The US space agency, NASA, spends about $3 billion (£2.4 billion) a year on the space station program, a level of funding that is endorsed by the Trump administration and Congress.

A U.S. House of Representatives committee that oversees NASA has begun looking at whether to extend the program beyond 2024.

It travels at an astonishing 17,200 miles per hour, which allows astronauts to be able to see as many as 15 or 16 sunrises and sunsets every day.

That amounts to tens of thousands of sunsets and sunrises viewed of the course of a year. For example, retired US astronaut Scott Kelly observed 10,944 sunrises and sets during his year in space.