Nasa astronauts could soon have their faces on cereal packets

Soon Nasa astronauts could have their faces on cereal packets and their rockets branded with private company logos.

This is according to Nasa Administrator Jim Bridenstine, who says the space agency is considering getting corporations to buy the naming rights to missions in a bid to commercialise space activities.

At the end of last year, President Donald Trump directed Nasa to send Americans to the Moon for the first time in decades, despite cutting his 2018 budget for it by around $200 million (£156m).

Soon Nasa astronauts could have their faces on cereal packets and their rockets branded with private company logos. This handout photo shows the United Launch Alliance Delta IV Heavy rocket with the Parker Solar Probe on board launching last month

According to Mr Bridenstine , who was speaking before the Nasa Advisory Council, ‘there is interest’ in pushing through commercial endorsements.

‘The question is, is it possible? The answer is, I don’t know. But we’re looking to the committee to give us advice on whether or not it is.’

Mike Gold, who is vice president for government contracts at Colorado-based space-tech company Maxar Technologies said astronauts may also be able to film adverts on the International Space Station, something that is currently forbidden.

He said this could increase the agency’s exposure, meaning there could be more people interested in becoming astronauts in the future.

‘When new industrial substances are created, commercial experiments conducted, or even advertisements filmed, American astronauts should lead the way’, he said.

‘Speaking of astronauts, the committee will examine giving them the freedom to pursue endorsements and other media opportunities.

‘Our astronauts are American heroes, and deserve to be treated as such’, he said.

Mr Gold said that if the US did not lead the way, foreign competitors would get there first. 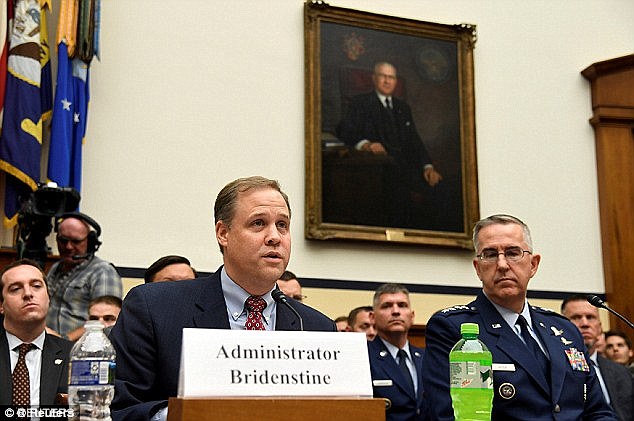 In a meeting with reporters at the Johnson Space Centre in Houston Mr Bridenstein elaborated on plans to build ‘Gateway’ modules that will orbit the moon and, ultimately, close the gaps in space exploration.

‘We want lots of humans in space,’ he said, according to Space.com.

The Gateway craft will initially support brief science missions of about 30-60 days, and will be key to exploring the moon in greater detail than ever before.

And, in the years to follow, a second module could be used to carry astronauts to Mars.

WHEN DID NASA LAST LAUNCH CREWED MISSIONS FROM THE US?

Columbia was only the beginning; following in its footsteps, NASA launched Challenger, Discovery, Atlantis, and Endeavor to carry people to orbit.

These launches also allowed for the construction of the International Space Station – the largest structure in space, that’s now home to a revolving crew of astronauts from all around the world, conducting important experiments that continue to advance our knowledge of the cosmos.

In the years since, NASA has had to rely on Russian modules to send astronauts to the ISS, all of which launch from foreign soil.

Now, the space agency is stepping up efforts to bring crewed launches back home.

On August 3, 2018, NASA revealed the nine astronauts that will soon take to space aboard the Boeing CST-100 Starliner and SpaceX Crew Dragon, to pioneer a ‘new era in American spaceflight.’

The crew flight tests will launch from the Kennedy Space Center in 2019.

The shuttle missions came to an end with the Atlantis shuttle on July 21, 2011 after STS-135. Above, Atlantis lands at the Kennedy Space Center at Cape Canaveral, Fl, marking the official end of the 30-year program