NASA attempts to bring pieces of Saturn’s moon Titan, which could be home to life, back to Earth

NASA has advanced researchers grant money to figure out how to get a mission to Saturn’s moon Titan and bring back any extraterrestrial life it discovers.

The return journey of the probe, which aims to bring back ‘organic compounds’ for further study, would be fueled by the celestial satellite’s vast methane lakes.

The space agency recently presented a $125,000 grant from the NASA Innovative Advanced Concepts (NIAC) to the NASA Glenn Research Center in Cleveland, Oh. to figure out whether such a mission could be possible.

In addition to the liquid ocean that many scientists believe could be home to life, there is a class of chemical compounds on its surface and in its atmosphere, known as tholins, that are not found on Earth.

These compounds, which the mission is proposing to bring back, could benefit from analysis on Earth’s labs.

NASA said tholins could also be ‘some of the building blocks of the solar system that could help us understand the origin of life on our own planet.’

Unlike the ‘seven minutes of terror’ that space agencies have experienced when trying to land on Mars, Titan’s atmospheric pressure would make landing spacecraft on its surface significantly easier.

‘We expect landing on Titan to be relatively easy,’ Steven Oleson, head of the Compass Lab at Glenn, which conducts conceptual spacecraft design for NASA, said in a statement. ‘Titan has a thick atmosphere of nitrogen — 1.5 times the atmospheric pressure of Earth — which can slow the lander’s velocity with an aeroshell and a parachute for a soft landing, just like astronauts returning to Earth.’

The NIAC funds ideas that are in the early stages of development and not yet an official mission, the agency said in the release.

‘NIAC is one way the agency fosters ‘wild’ ideas that require a decade or more of development but could eventually lead to revolutionary innovations that contribute to new and exciting missions,’ Thomas Zurbuchen, the associate administrator for the agency’s Science Mission Directorate, added. ‘The missions of today were ‘wild’ ideas years ago.’

Titan, the second largest moon in the Solar System, second only behind Jupiter’s Ganymede, is covered by a global ocean comprised entirely of liquid methane, according to NASA’s Cassini mission to Saturn.

Cassini, which intentionally plunged itself into Saturn’s planet’s atmosphere in September 2017 after a 13-year-long flyby, also spotted dust storms on Titan.

In addition to its massive ocean, Titan has extreme weather patterns, with a surface temperature of -290 degrees Fahrenheit (-179 degrees Celsius), something that has intrigued scientists for years.

‘Titan is an amazing world,’ Geoffrey Landis, the science lead investigator for Compass, explained. ‘It is covered in organic compounds protected with a thick nitrogen atmosphere and has liquid natural gas seas the size and depth of Earth’s Great Lakes on its surface. And beneath its crust, Titan is an ocean world, with a second ocean of liquid water hidden deep below the surface.’

The team will move on to figuring out how to create the liquid oxygen for the possible mission. Titan’s rocks are comprised of water ice which could be melted using heat from a nuclear source and then electrolyzed, NASA added.

‘Producing rocket fuel on Titan wouldn’t require chemical processing—you just need a pipe and a pump,’ explained Oleson. ‘The methane is already in a liquid state, so it’s ready to go. 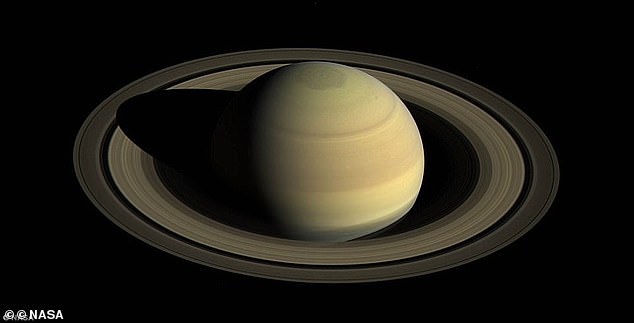 NASA’s Cassini mission ended in 2017 after 13 years of flying by Saturn, snapping hundreds of pictures and observing the gas giant and some of its satellites. 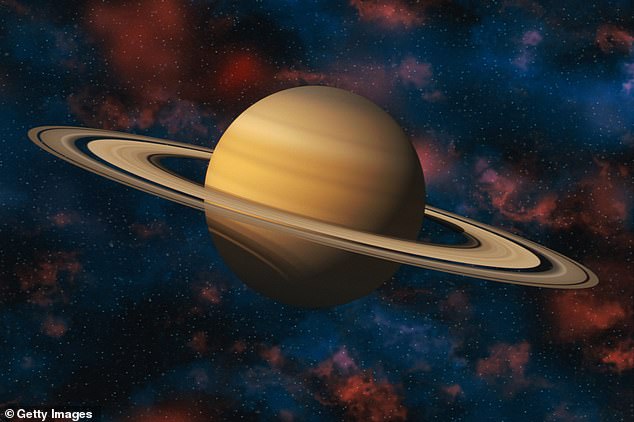 NASA hopes to send a mission to Titan in 2027 and find out whether it is home to life, as many scientists have suggested

‘Our aim is to design a cost-effective modern mission concept that could find and use resources at the destination,’ Landis said.

In June 2019, NASA unveiled a new mission to Titan, known as Dragonfly, that would fly more than 100 miles around the celestial satellite.